Lauren and Sam knew as soon as they were engaged that they wanted their 20th May 2018 wedding to be at Victoria Baths in Manchester. This super cool venue speaks for itself so they didn’t want to overwhelm the space with décor. I think you’re going to absolutely love what they did include though.

This pair did everything for their cool, minimal wedding their own way. Having planning ‘meetings’ in the pub helped them come up with all their ideas for the look of their day. The bright and beautiful florals are really something special and the tropical installation is incredible! I can’t get enough of the neon makeover it got for the evening proceedings.

Lauren and Sam were lucky enough to be helped by talented friends and family, with Lauren’s stunning dress being made by Sam’s mum who also made the bridesmaids’ skirts. Sam’s auntie also made the brilliant cake, so special.

Images today come courtesy of Mark Newton Weddings who actually got married in the venue himself. No wonder he got some truly epic shots! Thank you for sharing your brilliant work with us Mark.

We were going to Green Man Festival in the Brecon Beacons and in the run up we’d been listening to a lot of one of the artists playing, Father John Misty. His album I Love You Honeybear is a telling of his early relationship with his wife, from meeting leading up to their own wedding. One song, Chateau Lobby #4, we were both obsessed with.

We were at the top of the hill overlooking the natural amphitheatre with the Welsh mountain backdrop watching Father John Misty, and when he finished playing that one song Sam was on one knee, in the mud, next to a bin. We had two pints of Growler to celebrate and an hour later we were watching the closing fireworks display which features a giant burning green man effigy. It was a very bizarre and dreamy experience.

We wanted our wedding to reflect the proposal, to embody the spirit of the festival where we’d gotten engaged – the colour, the food, the atmosphere, the music, but mostly the fun. We just wanted it to be a really good party.

Planning the wedding was great – we soon found out that we weren’t into wedding fairs and Pinterest just had too many ideas, so we took our inspiration from our favourite places around Manchester. We’d end up making lots of notes on our phones every time we went out, and then having “meetings” in our local trying to channel our ideas into something useful.

Unfortunately, the note made a week before the wedding that said “a cool version of a cheese & pineapple hedgehog” never made it to fruition.

Within a day of getting engaged we’d already decided Victoria Baths was the venue for us. The wait for them to finalise their 2017 calendar was agonising, we looked at other venues in the meantime but nothing connected. When they finally offered us a date it felt like a real ‘oh great, now we can really get married’ moment.

The dress was custom made by Sam’s Mum, Lucy. It was daunting knowing that the dress could be literally anything I wanted, but it was fun watching the dress grow as we had new ideas and dropped things that weren’t coming together – the final product was very different to the original plan! I knew that I wanted a costume change, so we had a simple dress that I wore for the evening, with a lace sleeveless coat for the daytime.

Sam’s was much more chill about his suit, picked up a few weeks before from Topman.

As Sam proposed during Chateau Lobby #4 by Father John Misty, we always knew that it would be our first dance, but walking down the aisle was much harder. I can’t remember where or when one of us suggested Moments in Love by Art of Noise, but once one of us said it the decision was made. It was perfect for us.

We’re lucky to have a number of friends and family that are DJs, have radio shows, or just have excellent taste in music, so for the evening party lots of people took slots on the decks. We gave them no guidance, so the music they picked was a reflection of both them and us.

Spain is very important to us – Sam’s Mum and Step-Dad live there, and his little Sister is more Spanish than English, so we wanted her to do a reading in Spanish for us. She chose the poem she read for us and it was lovely, we think. We don’t understand Spanish.

This went in the pile of wedding expenses we decided against, with things like a Rolls Royce, sugared almonds and champagne not from Aldi.

Lauren’s make up was done by Make Up by Sophie and hair was done by Amy @ Vox, who has been doing Lauren’s hair for almost forever, with other stylists there doing the bridesmaids. Both Sophie and Amy were amazing, keeping everyone super chilled and happy.

The flowers were by Frog in Manchester. David was an absolute dream to work with, we’re big into green plants and neons and he just got our vibe straight away. Every trip to Frog to do some planning was a real treat.

Affectionately referred to as Flamingos during the planning process, the bridesmaids wore coral skirts made by Sam’s mum, and their own white tops.

Mark was the first vendor we chose. We met him at a wedding fair at Victoria Baths and got along with him instantly – when we said that we wanted a pre-wedding shoot in a chippy inspired by Roisin Murphy’s Overpowered cover he didn’t flinch. He’d been married in the same venue, so he shared our love for the space.

We wanted to let Victoria Baths speak for itself so tried not to do too much to the space – the real star of the show was the tropical backdrop in the pool by Frog.

The disco balls were a late addition when we stumbled across them in a local pound shop and decided we should probably buy 50 of them and figure out how to incorporate them later. The resulting “disco wall” might have given us a great backdrop to the speeches, but making it almost sent us blind.

Favours were special enamel badges we designed on bespoke backings for each guest. We spent a little extra for the furniture we wanted, but the vibe was quite minimal and cool throughout so the venue took centre stage. 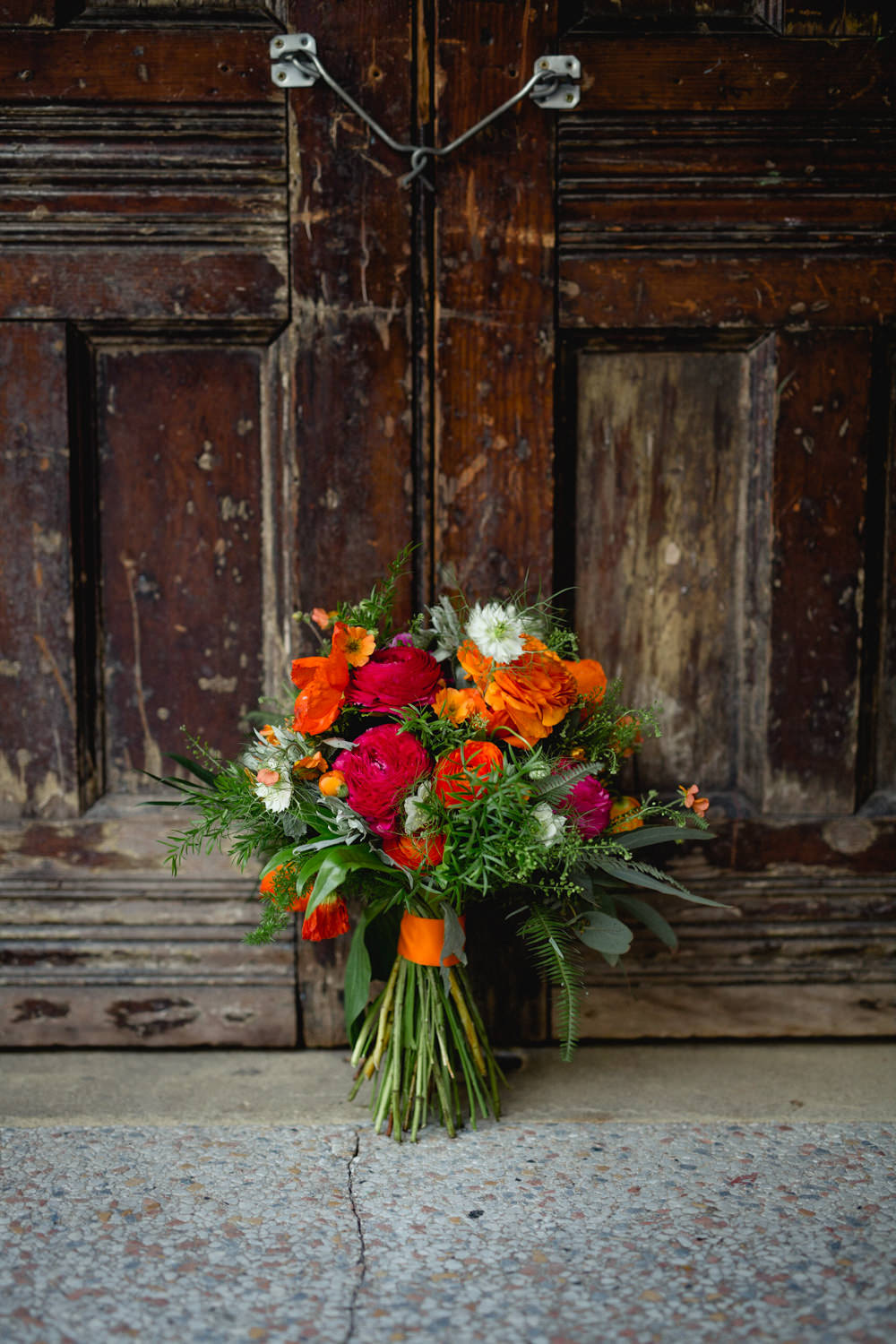 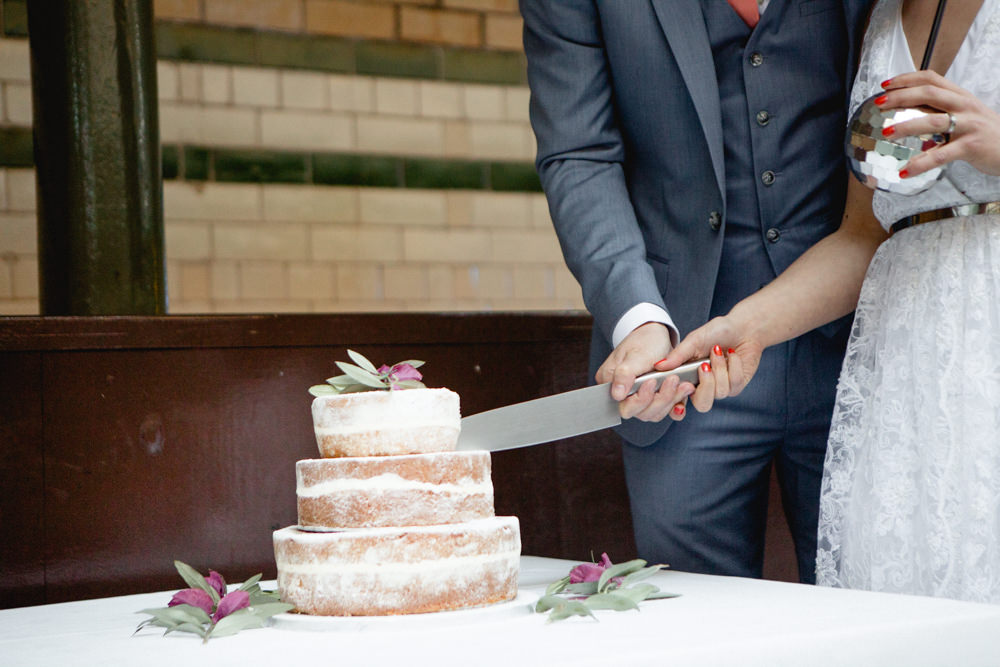 We again drew from our generous and talented family, and Sam’s Auntie made the cake for us, decorated with bougainvillea petals from their garden in Spain. 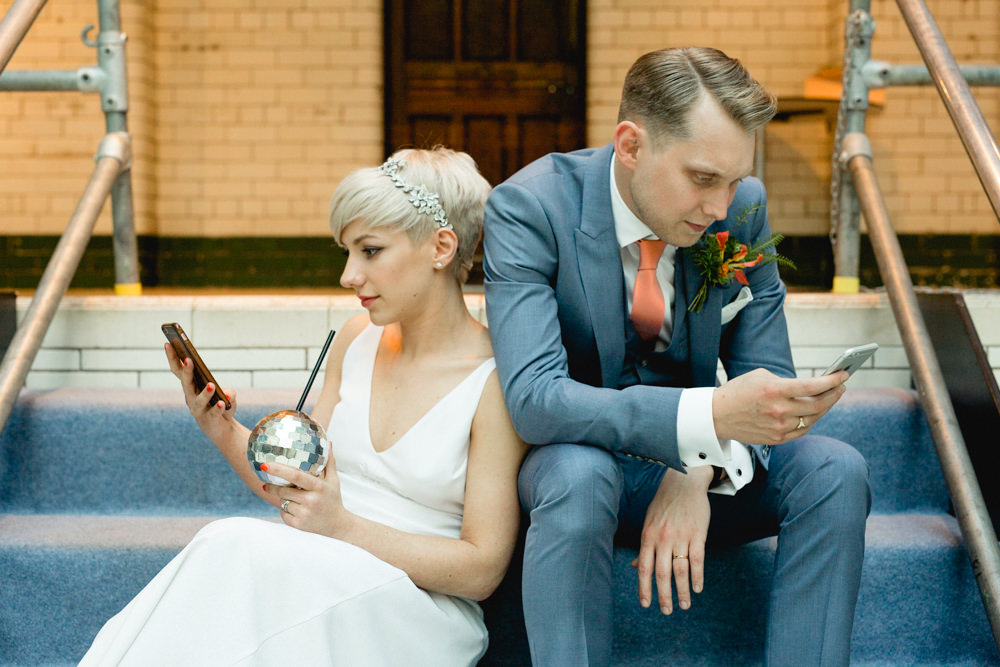 We went to Barcelona for a week. It’s our favourite place and we’ve been dozens of times, but always living like students in airbnbs, so it was a whole different experience to go and stay in a posh hotel and eat at nice restaurants.

On the flight out we were surprised by an announcement from the pilot congratulating us (arranged by Lauren’s Mum) and after we landed they gave us a tour of the cockpit. It was Sam’s highlight of the whole thing, wedding included.

It’s hard to pick memorable moments because the whole day was such a riot and there were so many memorable moments that we weren’t even part of. It was just so great having all our loved ones together enjoying themselves, and hearing the stories and seeing the photos the next day – guests turning up and immediately trying to climb in and out of the pool, people dancing with strings of disco balls, the bridesmaids giving each other piggy backs, the best man dancing in a club carrying a suit bag afterwards.

The speeches were something special though.

Just enjoy it. It’s over before you know it and you’ll wish you could do it all again. If it’s not going to make the day more fun, don’t worry about it.

Printers
Marc The Printers and Moo

Well Lauren and Sam, the pub planning certainly paid off, what a fabulous wedding! Thank you for sharing. Rachel x