This real wedding really does have it ALL. There is an idyllic and meaningful setting, dreamy summer weather and a heck of a lot of love.

Rowena and Adam were married on the 27th August 2017 and they envisioned a relaxed yet sophisticated celebration with a range of fun colours. There was only one location for the wedding, Rowena’s family home, where she had always imagined getting married. It’s no surprise with gardens so beautiful and countryside views of Hampshire. With the legal ceremony having taken place the day before, the couple were free to tie the knot in a handfasting ceremony outdoors beneath a hazel arch. Tipis were the perfect option for the party and they looked so magical lit by night.

As our pair are vegan, they decided the whole day would be vegan, not just including the food and drink, but also their clothes and make up. Rowena looked for a 1920s feel dress and Kate Beaumont‘s Delphinium gown fitted the bill perfectly. She then accessorised it with an art deco bead head piece, which looked incredible in her cropped hair. Adam wore a cotton suit with red tie and lightning bolt pin.

There are so many meaningful and delightful touches and choices here that will really inspire you. We cannot thank Ellie Gillard enough for sharing these remarkable images with us today. 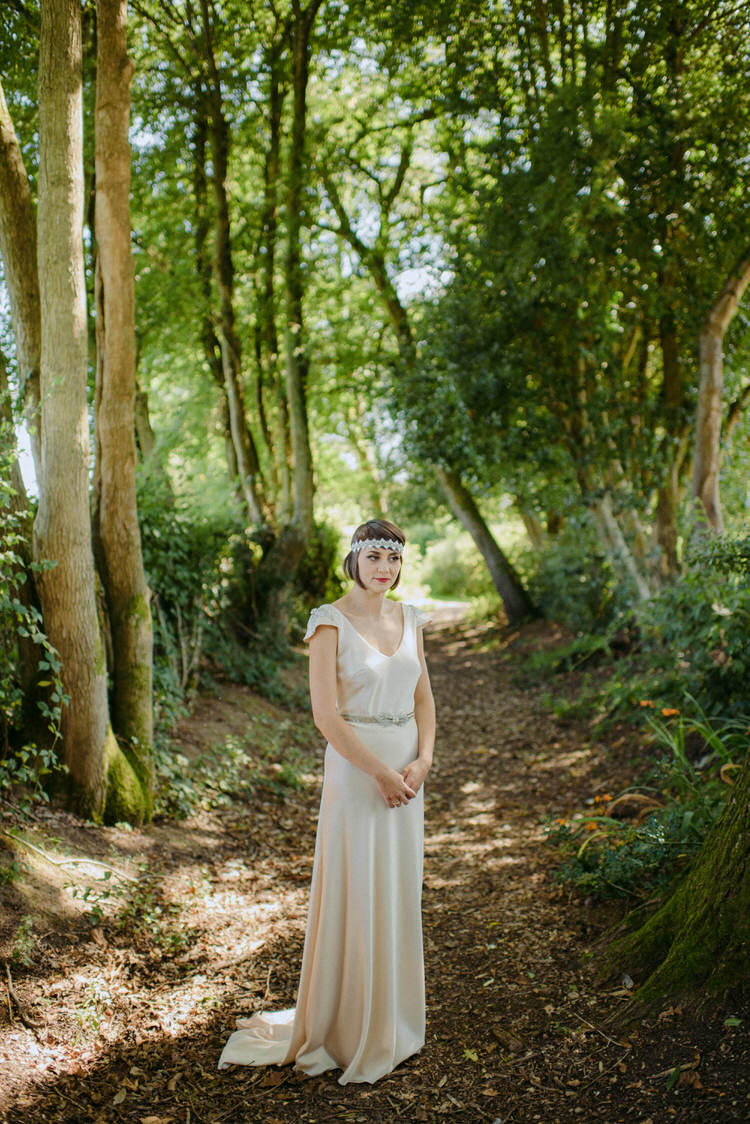 THE PROPOSAL | Adam and I went on a trip to Bath, one of our favorite places to visit, and were strolling along by Pulteney Bridge after a delicious meal at our favorite veggie restaurant. We stopped to watch some swans swimming past and that’s where Adam proposed. He presented me with an Emerald stone, which I later had set into a band I had designed myself.

THE VISION | I had always imagined getting married in my parents family home, a beautiful cottage in the Hampshire countryside, where I had spent all my childhood. As we couldn’t legally marry at home, we had an official ceremony on the 26Th at Shaw House in Newbury with very close friends and family, followed by a meal at the wonderful Wellington Arms where I got ready the morning of the 27th.

We wanted the wedding to be a fun and relaxed garden party, and the day to be a reflection of us and who we are as people. Adam and I are both vegan, so the entire wedding was vegan, from the food and drink, to our clothes and make up.

My Dad collected me from the Wellington Arms in his much beloved Morgan, and the ceremony took place in the garden behind Pond Cottage. The flowers were blooming and the birds were chirping. Albie our Jack Russell was joint ring barer with Adam’s twin brother, Aaron.

THE PLANNING PROCESS | Most of the booking, organizing and emails were done by me, although Adam did come up with several ideas too. We mainly found suppliers from the internet and through friends and family.

THE CEREMONY | I walked down the aisle to a 3 piece band, a piano, violin and flute called Moon River, which was magical. The ceremony itself was slightly alternative. A celebrant lead the initial ceremony held under a hazel archway, then a very close family friend David read us a poem he had written especially for the day. My Godmother Wendy then continued the ceremony to a Labyrinth my parents had created in a field next to the house. The guests followed as the band played, and Adam and I then walked the Labyrinth together whilst hand fasted. The meaning of hand fasting is to join two people’s energies so they can walk their life path in unison. Once in the Labrynth itself, gifts were then presented to the Great Goddess – The Earth, otherwise known as Gaia. These were oil, salt and water. The hand fasting and Labrynth were my Godmothers idea, but Adam and I believe in respecting life, nature and energy, so felt it was really fitting for our wedding day.

THE FOOD & DRINK | After the ceremony, we enjoyed bubbles and canapés in the garden, followed by the speeches. The evening meal was served in 2 giant tipi tents as the end of the garden. We served a vegan 3 course meal, created by Cashew Catering who are based in Lewes. It was such a treat for Adam and I to enjoy a vegan meal with all our family and friends when it has become such an important part of our life values.

The evening’s entertainment was a friend playing Motown, funk and soul and sca records in the giant hats and vegan hot dogs by Beelzebab were served and eaten by a bonfire back in the Labyrinth field. We served All Shook Up and Priscilla Cocktails from a separate Kung tent in the garden, the ‘Elvis’ bar. This bar was in memory of Adam’s mum who passed away some years ago. She was the biggest Elvis fan, and collecting various Elvis memorabilia and decorating the bar was the most fun of all the wedding planning, and so special to finally see our planning come to light in memory of her. The bar had a life sized cut out of Elvis, who stood with a basket of flower garlands the guests could wear. We had a record player in the bar that played Elvis tracks all night long. The bar also served our own vegan ale, created for us by Little London Brewery, a village next to my parents.

THE DECORATION | The giant hats were decorated with dried hops, wild flowers in milk bottles and French linens. I used botanical postcards by Katie Scott and wooden pegs to create our seating plan. I found a company on Etsy to design me some name settings using brown luggage tags. I collected all the jam jars I could over the 1.5 years of wedding planning, which I then used to hold paraffin tea lights on the long tables with benches. A separate area by the pool had incense, candles and ethnic rugs and poufs. As dark came, we lit fire torchers that marked the way to the pool and out to the bonfire, fire pits outside the giants hats and chimineas on the patio. We draped festoon lights around the pool area and at the entrance to the tents. We used a local florist from Brighton called Gunns, who created our bouquets including flowers from Mum’s garden, and he floated Dalia’s in the pool. I used a company from Lewes called Lotus Floral Art to make me dried collars for the dogs and dried floral garlands for my two bridesmaids and flower girl.

THE DRESS & ACCESSORIES | I searched for quite a while for my dress. I was after something simple and elegant with a vintage, 1920s feel to it. I found Kate Beaumont online and travelled from Brighton to Sheffield to check out her collection. Luckily, I fell in love with a dress, her Delphinium. The dress was made to measure, and I changed a couple of details, including sourcing a faux silk fabric from France to keep my dress animal friendly. Bugle bead details of the dress Kate used were made by Debbie Carlisle, and I bought an art deco bead head piece by Debbie too to finish off the dress.

BEAUTIFUL BRIDESMAIDS | The bridesmaids wore wine coloured dresses I found on Asos and had personalized initial pendant necklaces. The flower girl wore a cream dress from Monsoon, and they all had dried garland head dresses by Lotus Floral Art.

GROOM’S ATTIRE | Adam wore a linen/cotton suit from Folk. He and his 3 best men wore gold TLC lightening blot pins, Elvis’ famous symbol. They also had buttonholes made by Gunns, using wild flowers and lots of mustard yellow to tie in with our flowers.

First Dance: Elvis ‘I can’t help falling in love with you’

Thoughts in a Garden by B R Gerhardt

Now you will feel no rain, by unknown Native American

THE FLOWERS | Gunns Florist, Brighton. The flowers were wild and rustic. Lots of mustard yellow and dark red to go with the bridesmaid dresses in the bouquets, but the flowers in the giant hats were Technicolour.

THE CAKE | Cashew Catering. We has a 3 tier victoria sponge (vegan of course).

THE HONEYMOON | Adam and I had 3 nights in Bath following the wedding, and stayed in a beautiful Georgian town house. We ate at our favorite restaurant again, and visited the spa. We then picked up the dogs and headed for 3 more nights in Tintern. We stayed in a cottage on the river and did lots of exploring with the dogs.

MEMORABLE MOMENTS | Walking down the garden path that I once played on as a child, with the sun shining and the birds chirping, and Moon River playing me in, was by far the most magical part of my day. As for Adam, he would say the Elvis Bar was his highlight, and being able to feel that his Mum was with him on the day.

ADVICE FOR OTHER COUPLES | Print out an itinerary for the day and give a copy to all who need it, including all the small jobs that need to be delegated and timings, so everyone knows what they are doing and things don’t get missed.

It really doesn’t get more magical than that now does it?

Rowena and Adam, thanks so much to you both for sharing your splendid celebrations with us xo Lou