This may seem like the quintessential English countryside wedding, but in fact, this lovely day had some brilliant untraditional choices too. The stone barn setting set in the Cotswolds was utterly stunning and I am sure you’ll agree, it made the perfect backdrop to this beautiful day.

Rose and Oliver were hitched on the 15th July 2017 at Merriscourt in Oxfordshire. A fun and relaxed atmosphere was their top priority and it looked as through everyone had a really lovely time. The couple greeted their guests pre ceremony and also walked down the aisle together, which I just love. It’s those unconventional choices, which really make a wedding personal and unique.

Green and white tones were used throughout so perfectly. Take the blooms and especially Rose’s bouquet for example, it was bountiful and wild in shape with foliage and white stems taking centre-stage. Bunting, botanical stationery and home made chutney all adorned the barn reception too. Rose’s outfit really looked incredible, I do love her skirt and top combo by Andrea Hawkes teamed with flowers in her hair. Oliver meanwhile chose a blue suit and green tie for a classic yet modern look.

Alexandra Jane Photography, thank you so very much for sharing these remarkable images with us this morning. 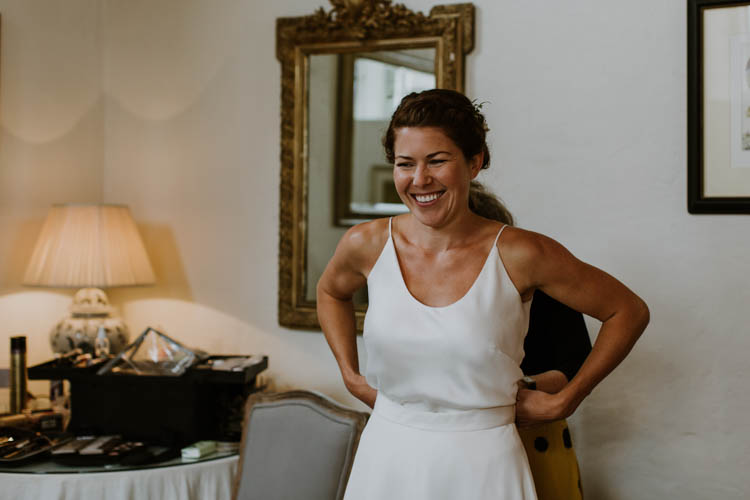 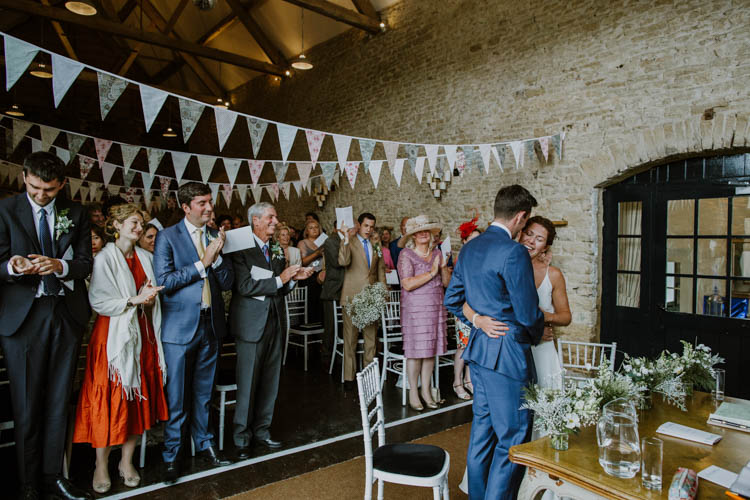 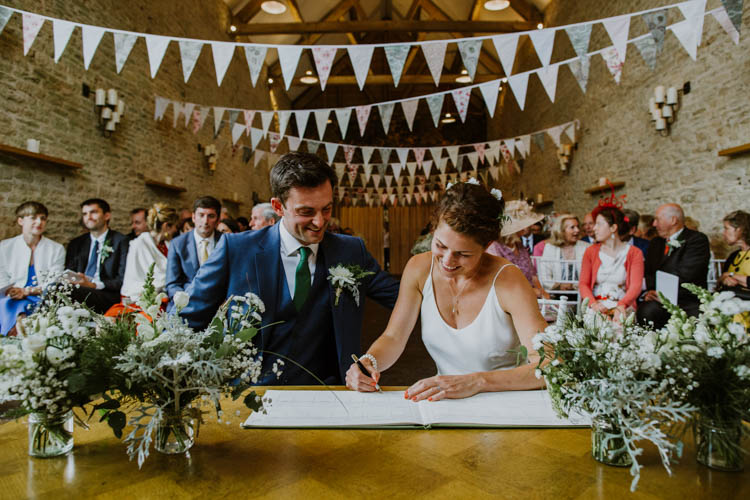 THE PROPOSAL | Oli proposed on a mountainside when we were hiking in the stunning Maroon Bells national park, Colorado (after a nearby family wedding). Although we’d been together for many years it still came as a bit of a shock to Rose – so much so that she only said ‘thank you!’ at first, and only ‘yes’ after Oli pushed for an answer!

THE VISION | Our main goal was to create a fun and relaxed atmosphere, which took only the best parts of a traditional wedding (and dropped some of the old-fashioned bits). For example, we greeted the guests together before the ceremony, walked down the aisle together and both did a speech.

THE PLANNING PROCESS | Planning was quite difficult and time-consuming, particularly as we were married within a year of the engagement (which is apparently a relatively short turnaround!). After working out a budget we created a lengthy ‘to do’ spreadsheet with the big decisions at the top. We then worked through the spreadsheet and added as we went along. Getting the venue and various suppliers sorted is the main hurdle, probably followed by the save the dates and invitations.

The whole process is certainly a marathon rather than a sprint, but goes in phases. Like a relay race, I suppose!

THE VENUE | We were married at Merriscourt, a collection of converted stone farm buildings near Chipping Norton, Oxfordshire. We decided against a church wedding quite early on, but still wanted a venue that felt traditional and had plenty of space. Merriscourt is idyllic and ticked all the boxes, what sealed the deal was its lovely on-site accommodation, where our immediate family stayed for a few days before the wedding. The staff were fantastic too and made the last minute preparations much less stressful than they could have been!

THE DRESS & ACCESSORIES | Rose bought her dress from Andrea Hawkes Bridal in Angel, London. She wanted a really simple dress in which she felt comfortable and natural. After trying on many, many, (many!) gowns, she finally settled on a two-piece with a simple silk top and flowing skirt. The outfit was quite simple so she bought a pearl drop necklace from Gillian Million Bridal, and wore a pearl bracelet that was a gift from her sister-in-law. Low-heeled rose-gold sandals completed the look, with a few hair flowers for good measure.

FINDING THE DRESS | Tried on lots of dresses, many second hand, then had one hand-made by Andrea Hawkes.

GROOM’S ATTIRE | Oli wanted something high quality and well tailored, but nothing too showy. We also didn’t want anything too formal (so tails were out) but something distinct from everyday business attire. He settled on a petrol blue three piece suit from Reiss on Regents Street, with black Oxford-style shoes. The outfit was completed by a forest green tie that matched a floral buttonhole.

THE READINGS & MUSIC | For the readings we were quite keen to find something relatively ‘off the beaten track’ and nothing too cloying! We did our own research, but in the end both readings were recommended by a close friend (Ansa, who happens to be rather well read…). Oli’s father read ‘Scaffolding’ by Seamus Heaney and Ansa read ‘Invisible Kisses’ by Lemn Sissay. Both were fantastic!

For the music, we walked down the aisle (together!) to an acoustic version of ‘You’re My Best Friend’ by Queen and finished the ceremony with the entire congregation singing ‘Happy Together’ by the Turtles (lead by our guitarist). The latter worked really well, having everyone join in to such a lightheaded tune made things much more informal and joyous!

BEAUTIFUL BRIDESMAIDS | We didn’t have any bridesmaids, though Rose’s sister and best friend were on hand to help with setting up the wedding, along with the rest of our immediate family and some close friends.

THE FLOWERS | We didn’t want anything ostentatious, so went for lots of greenery and white flowers but nothing more complex. Our florist was great at talking through the options and suggesting ideas. We ended up with gypsophila (baby’s breath) at the end of the seating rows, a central display under the window in the stone barn (where we had the ceremony) and two large hanging circlets in the white barn (where we had the wedding breakfast). The men also had buttonholes that matched the theme.

THE CAKE | Our fantastical baker friend Ruth (Ruthalicious Cakes) pulled out all the stops and made the most colourful and delicious cake the world has ever seen. She somehow managed to transport it from Manchester in one piece too, an incredible effort! We added a 6″ 3D printed model of us for the topper, which everyone thought was a great idea!

YOUR PHOTOGRAPHER | Our priority for the photographer was finding someone that had an eye for capturing the emotions of the day, without being cheesy or staged. After scouring the web we found Alex, who is both a consummate professional and a lovely person! We first met her for a pre-wedding day shoot (which was a great way to get used to the idea of being photographed too) and couldn’t have been more pleased with the results.

THE DETAILS & DÉCOR | Most of the decor was green and white (including the signage, stationery and flowers), but we also had a lot of borrowed bunting to add some colour. Probably the single biggest effort was to make 120 individual pots of chutney and marmalade as wedding favours, which went down very well indeed! Another feature was the 3D printed model we had for the cake topper and the wire bicycle stands we had for the table numbers.

THE HONEYMOON | We spent a week in the Cotswolds immediately after the wedding and 10 days in Puglia, Italy a month or two later. Both trips were fantastic. Having a low-key, relaxing holiday immediately afterwards was great (and meant we could fully ‘recharge’ before the bigger trip).

MEMORABLE MOMENTS | Rose got a little tearful during the ceremony but managed her lines and added ‘smashed it!’ afterwards, which made us all laugh. The speeches were great fun too, particularly the best man’s! We loved the first dance, and spending time with our guests during the drinks reception.

ADVICE FOR OTHER COUPLES | Enjoy it! The stress and worry beforehand is totally worth it. Planning wise, we found it all became much easier when we’d booked the various suppliers; they are there to help after all. It is also useful to have a clear idea about what type of wedding you are after and sticking to it, creating Pinterest boards and sharing them with suppliers makes this easier. Adding everything to a spreadsheet is key too. Friends and family (and Google!) will have examples to share.

Rose and Oliver, thank you both so much for sharing all about your stunning celebration with us today xo Lou