All the fun vibes today with Mollie and Stewart who had a wonderfully colourful wedding day at Teybrook Orchard, which is a Browning Bros venue in Essex, on the 17th August 2019. The venue was just perfect for their outdoor wedding, and enabled them to tie the knot in the woodland too, with a reception in a marquee following.

Mollie and Stewart’s wedding was truly a DIY affair with their nearest and dearest all coming together to craft and create. The results were just gorgeous and the tables in the marquee in particular worked so well. There were hessian and lace runners, floral napkins and flowers in jars to name just a few.

Mollie looked stunning in her short wedding dress teamed with glitter pumps, while Stewart looked very dashing in his kilt. Do also keep an eye out for bunting all round, glamping and boho dreamcatchers!

Hayley Jayne Photography, thank you ever so much for sharing these stunning captures today.

We had gone on holiday to Orlando Florida in 2017 and it was 2 days into the holiday and we had gotten up early to to go to breakfast at the beauty and the beast restaurant and decided to split up from our group. Stewart had me take the long way round to the ride passing the castle. I had turned around getting annoyed he was taking ages to get his sunglasses out but had turned around to moan and he was on one knee and then asked if I would marry him, and in total shock I got down on one knee as well, and after the shock we didn’t really know what to do so just carried on to the ride and I spent the day telling all the ride operators and holding my hand up looking at my ring.

We knew we wanted it to be outside and festival feel and just fun. We imagined games, flags and sunshine. We did have big ideas of a funfair too but knew that was just dreams.

After finding out getting married outside in England wasn’t possible we did think shall we just have another style wedding, but we said no lets do what we want. We also found it a struggle to find outdoor venues in Essex, we came across Browning Brothers we checked out their website it looked and it was also close to where we lived. We pretty knew we were going to go for Teybrook Orchard just from the pictures but we did want to view it so on a rainy April we went and looked around and knew it was perfect for us. Once we had the venue and their list of preferred vendors everything else was booked easy. We had the celebrant Nichola Collinson from Bespoke Celebrants, she was great from start to finish, the caterer Black Jacket Events another great choice amazing food and also a great help and made it easy. We spent a while trying to find the right style of photographer and we found Hayley Jayne’s website and it wasn’t too forced and being 2 people we who don’t like their photos being taken she was amazing. And our mums and Grandparents were a great help and did a lot for the wedding and gave up a lot of their times over the year leading up to it.

The day decorating was very long and hard but we pulled it off and had a bit of fun at the same time.

We didn’t have any readings at the wedding but the celebrant just told the story of us meeting and going through life and the proposal. But the music was a fun choice to make. I always knew from the moment we got engaged I want to walk down the aisle to Sam and Dave Hold on I’m coming, as I never take life to seriously and like to be funny with whatever I’m doing. And also as a joke as I’m always on time for everything even when I’m trying to be late I’m still the first one at something.

Stewart had the choice of the song walking out of the ceremony but that took longer as he is a massive music lover. But he finally settled on Elvis Burning love again for the fun of the song and is a big Elvis fan. 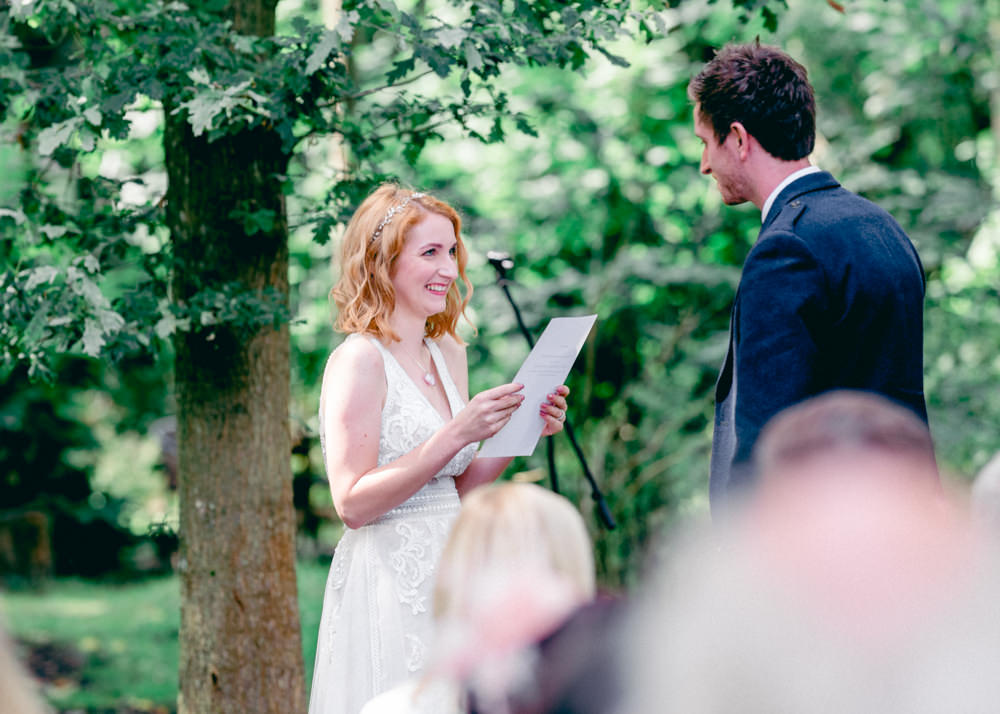 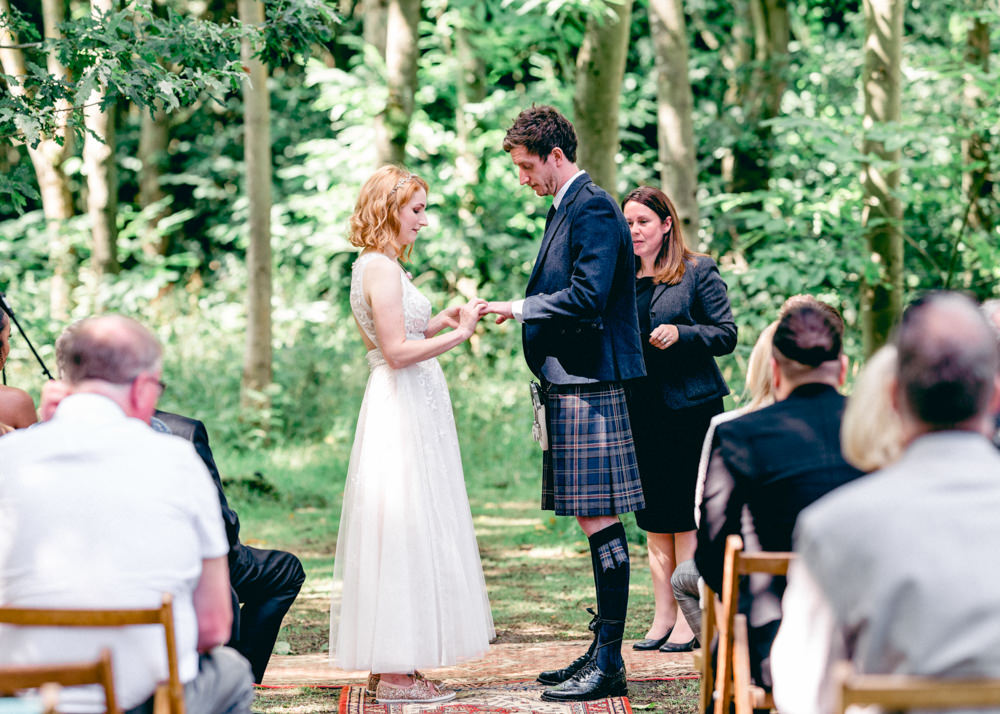 I did my own hair and make up as did want to keep costs down but also wanted to feel and look like myself. I did buy some good make up like Estee Lauder foundation and Laura Mercier powder but everything was actually stuff I normally used from like NYX and Loreal and Revolution.

Which is a glamping site but also an amazing wedding venue, they have lots of tents available for guests and a beautiful opening for the ceremony as well as a marquee for the dinner and dancing after and also a full working kitchen they also give you the choice if you want them to run a bar for you. What more could you want. 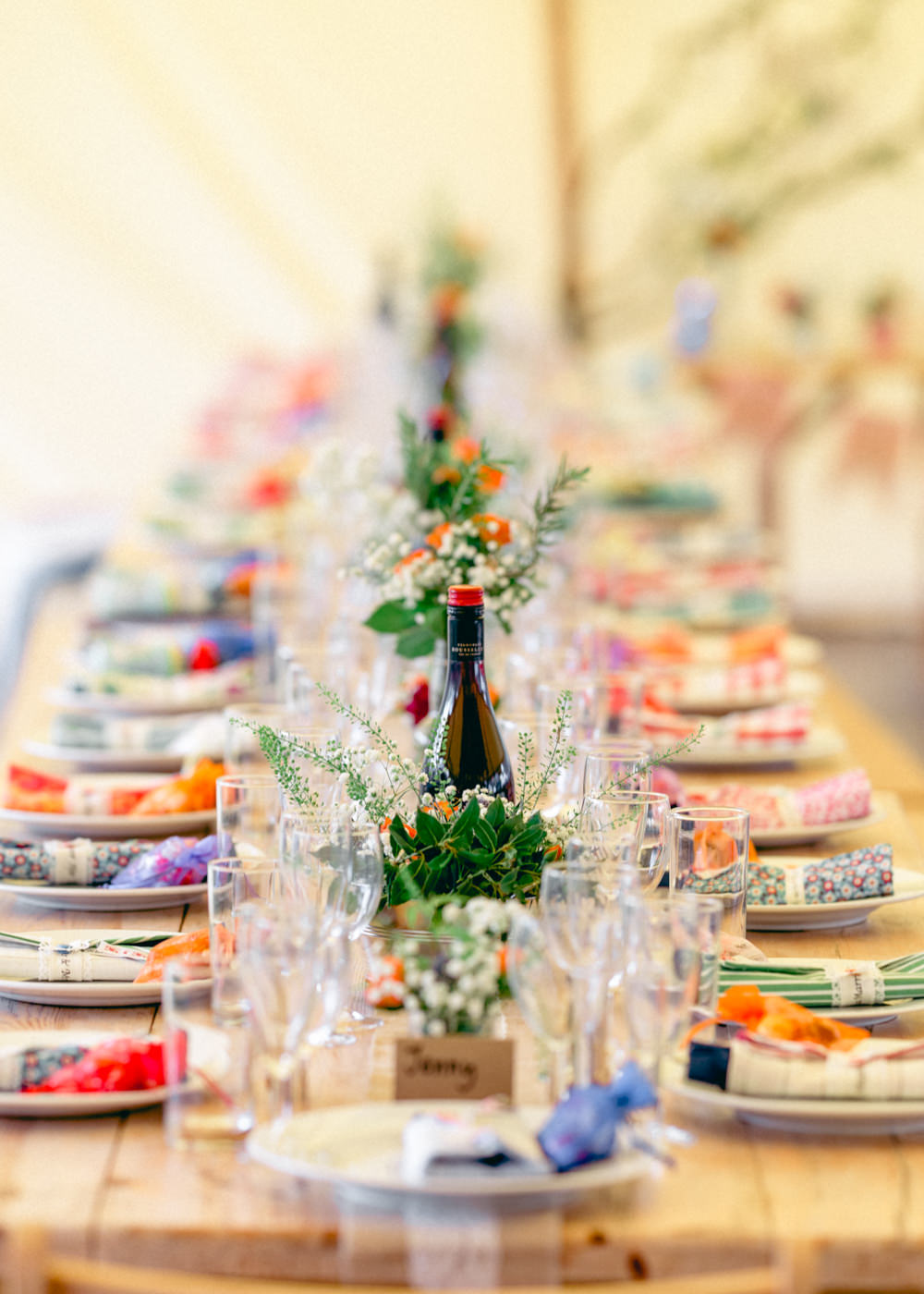 We (being the brides mum) did the flowers ourselves. We ordered them and picked them up from Byfords in Marks Tey. I wanted something floaty and light to go with the outdoor ceremony so we choose Gypsophlia for the small flowers but long stems for a cute look these were actually tied together with offcuts from my dress and a tartan ribbon. We also had these and Thisltles in our table flowers too for the Scottish influence and to be little different.

The caterers were also Colchester based and were Black Jacket Events LTD. We had look their website a lot and chose the canapés which were mini fish and chips (amazing) and mini salt beef ciabattas (amazing) and mozzarella and tomato tartlets (amazing) and for the main we had a BBQ which included sausages and burgers and prawns and sides. They were all so good. But the desserts were the best part and they were blackberry and mango pavlova which I had given the nickname unicorn poo as they looked like what I imagined they would be, these were what people were talking about afterwards, we also had strawberry cheesecakes which were also great.

We found Winnie the caravan for a Photo Booth, which is a old style caravan with loads of props people had a lot of fun it in and you can fit a lot of people in it at a time. They also do 2 print out which they put in a guest book for you and so people and sign it as well which is a great keepsake and laugh. They also give you a USB with them all on and a video of it which is very funny

The decor was mostly done by us. So lots of home made bits a pieces and my grandma even cut a bit of her tree down to have as decoration. They went crazy. My mum and grandma also made all the cutlery holders as well as another detail. My mum had collected a lot of corks over a few years was finally happy they she got to use them for name cards holders.

We had so many people helping out decorating the day before aunts uncles and cousins brothers and grandparents. They all did an amazing job. It included a lot of carrying beer and hanging stuff up around the tent.

We also had hired chairs and Persian rugs from Anthony for the ceremony place.

We had giant festival flags at the entrance from event flag hire and a lot of bunting to go up and around.

The brides mum had also been drying rose petals for confetti over the last year too and had made confetti cones. 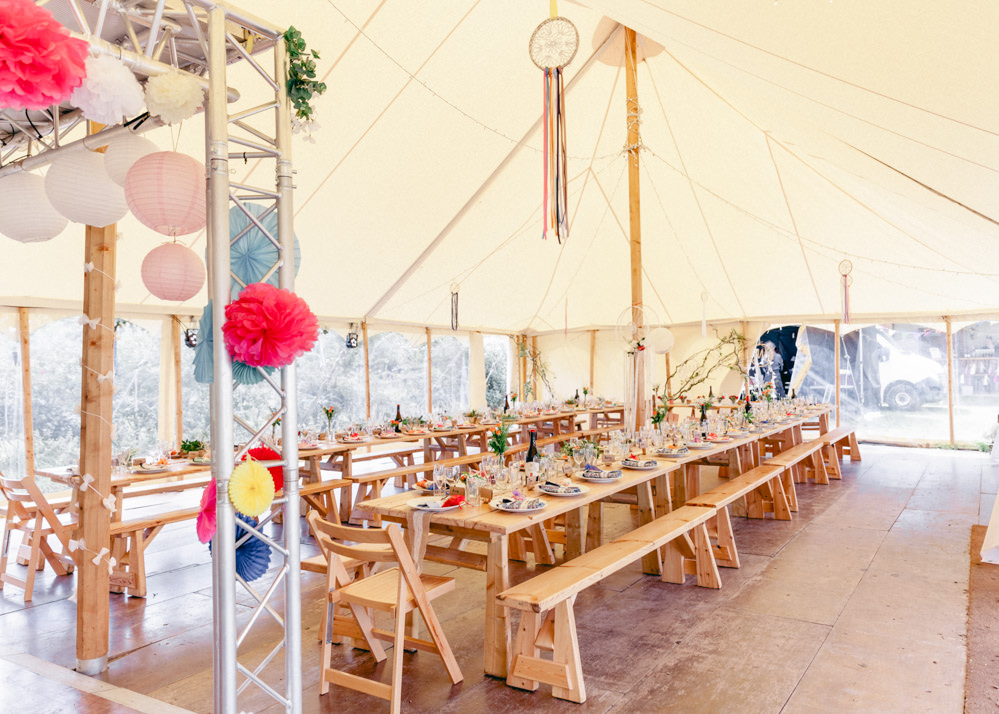 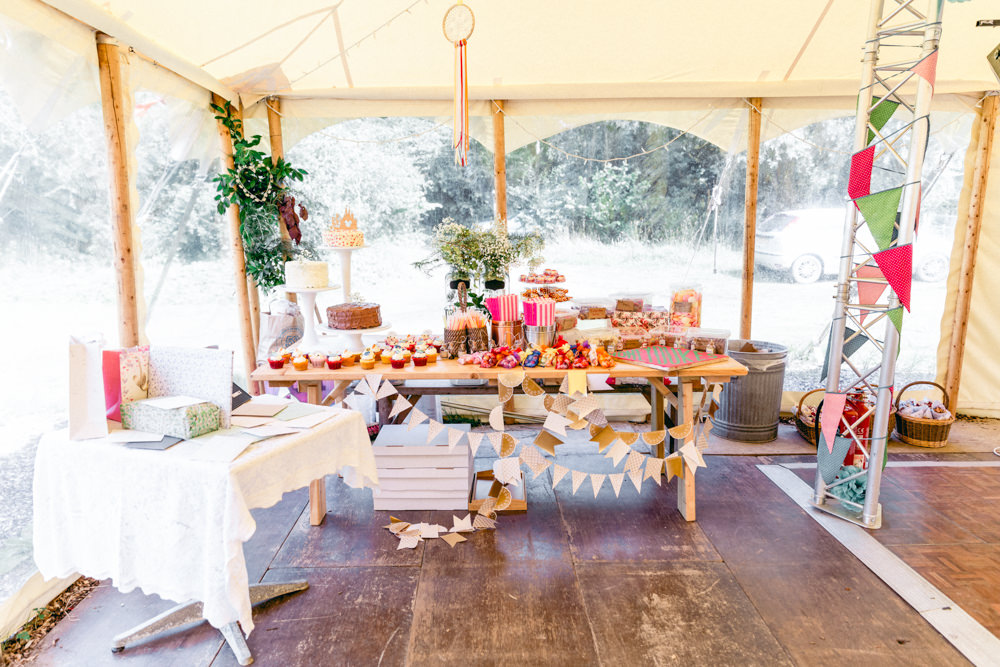 The cakes were made by the brides Grandma and cousin. They were on top a rainbow cake with buttercream icing and our cake topper was on this layer which I found on Etsy and it was a proposal in front of the Disney castle which was amazing to find as it was so true to the truth of ours.

The second was lemon and elderflower which is the brides favourite and a chocolate cake on the bottom being a grooms favourite.

We also had cupcakes made by the grooms mum which were red velvet which is always a crowd pleaser and carrot cake as this is the groom favourite. 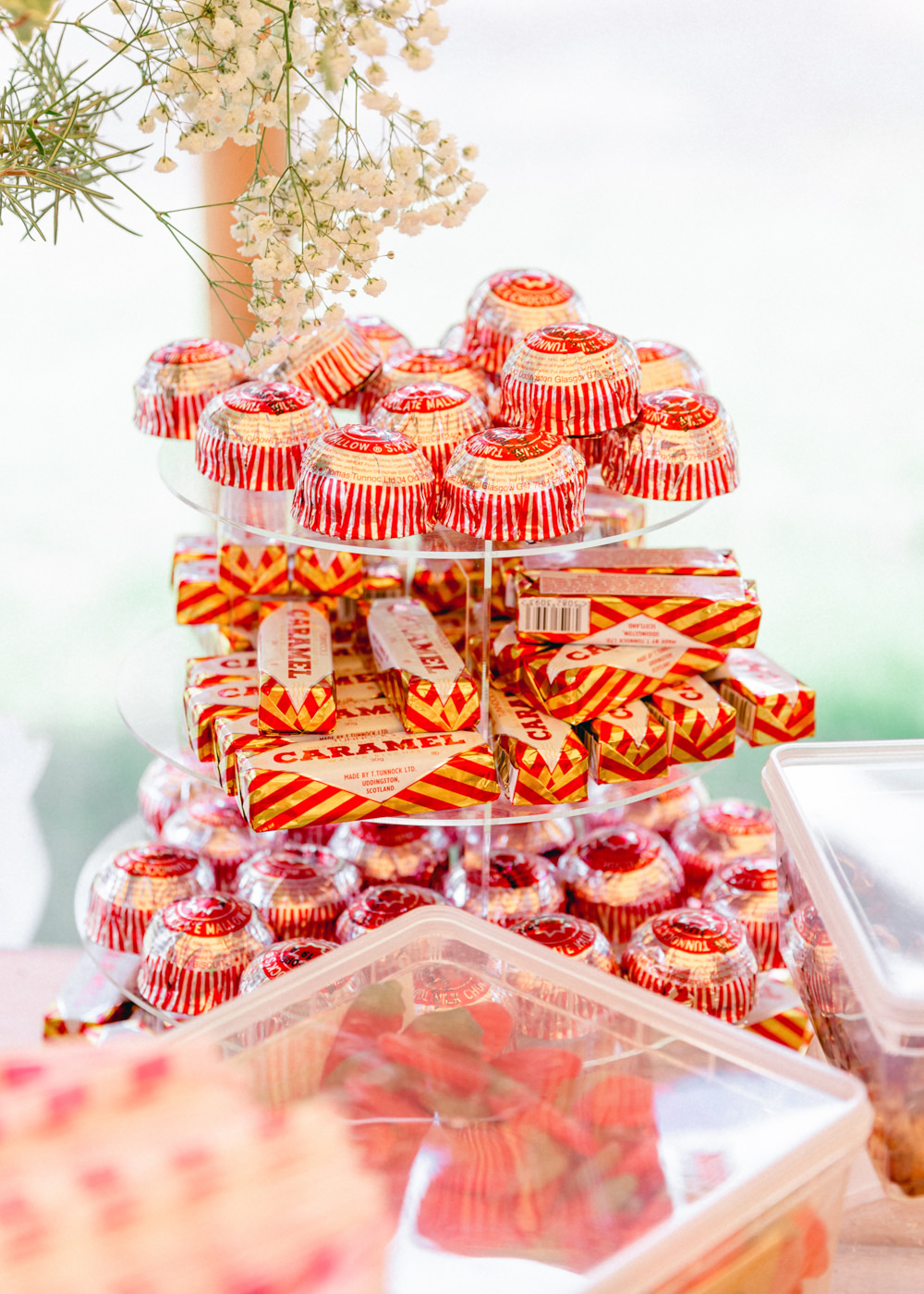 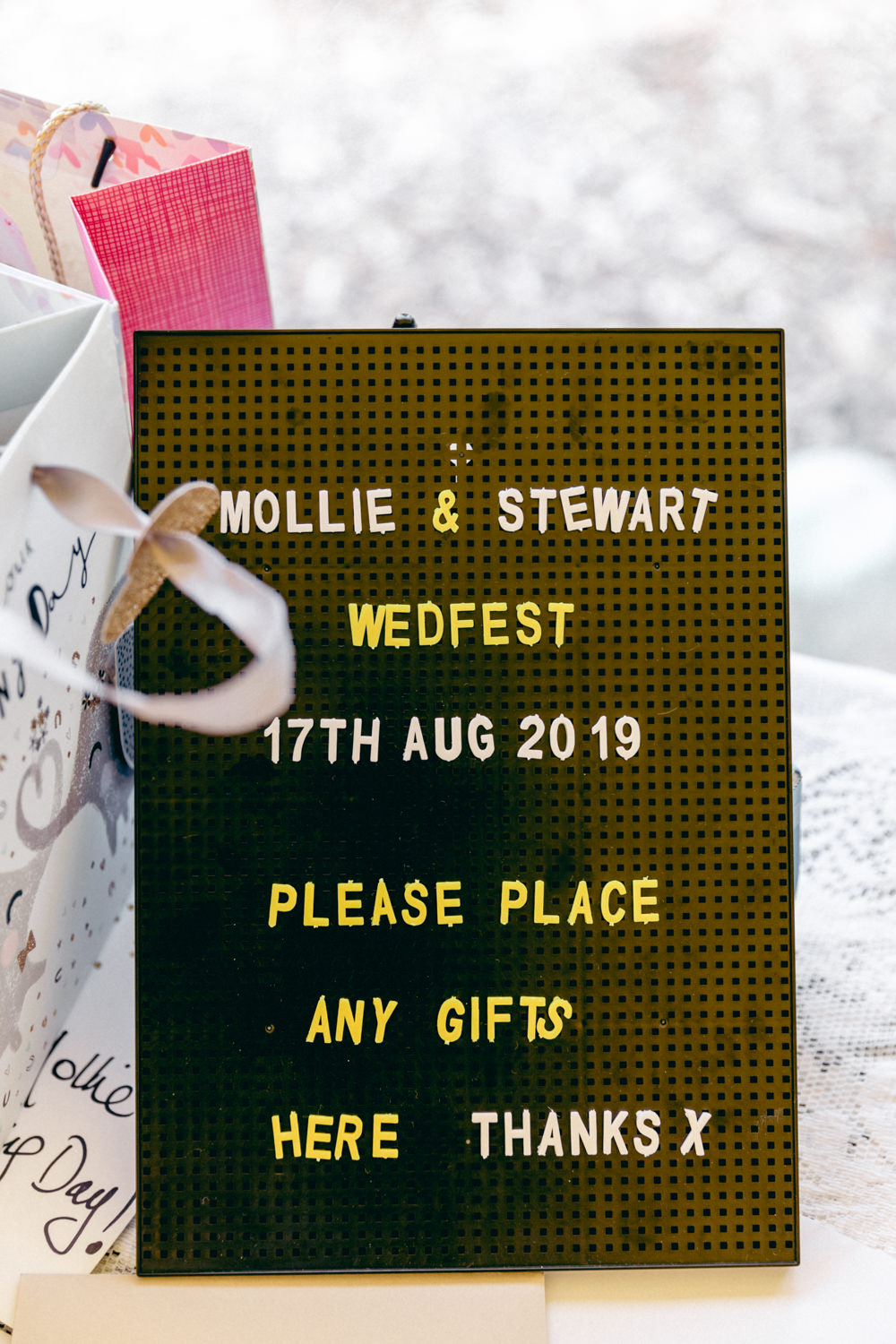 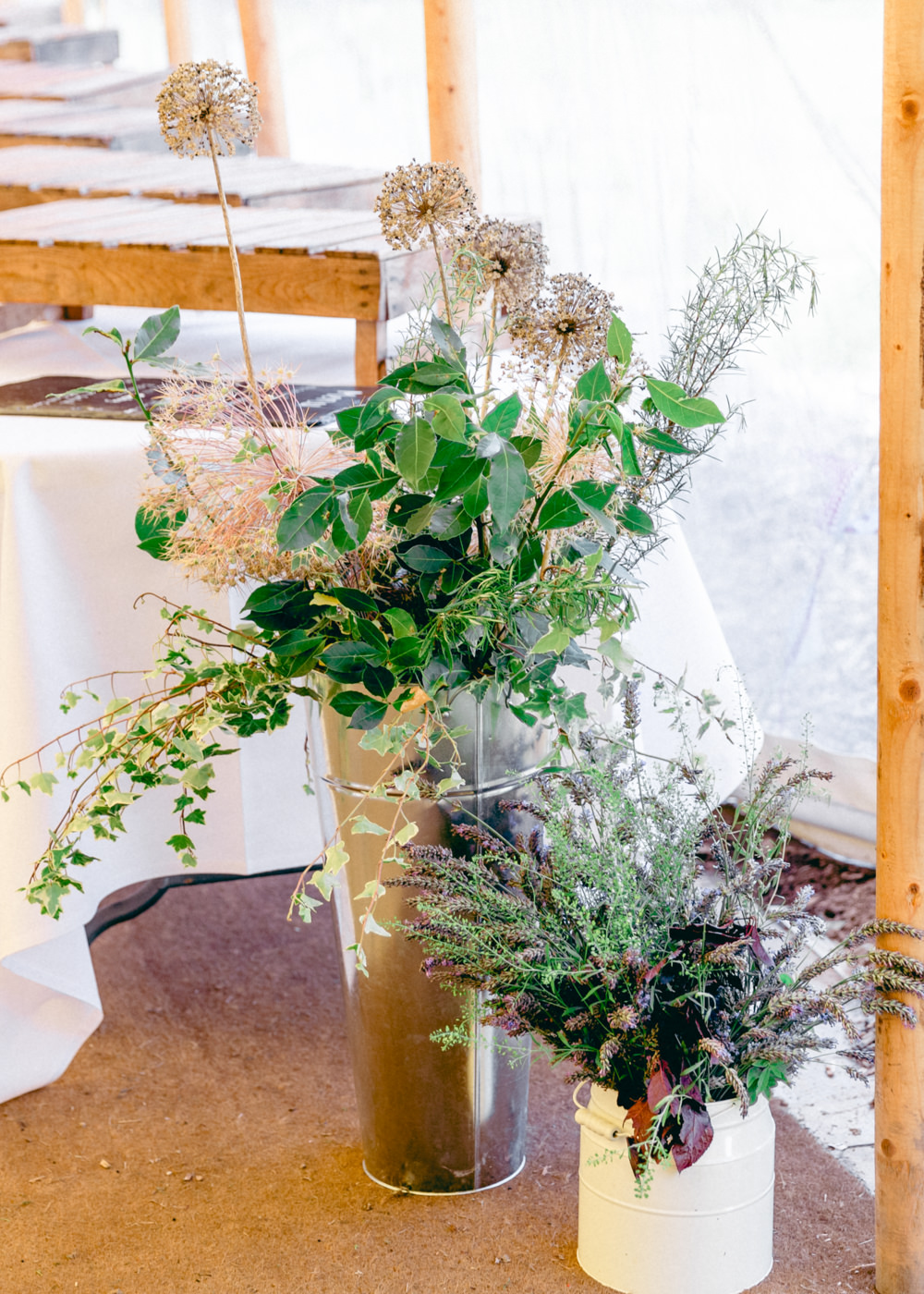 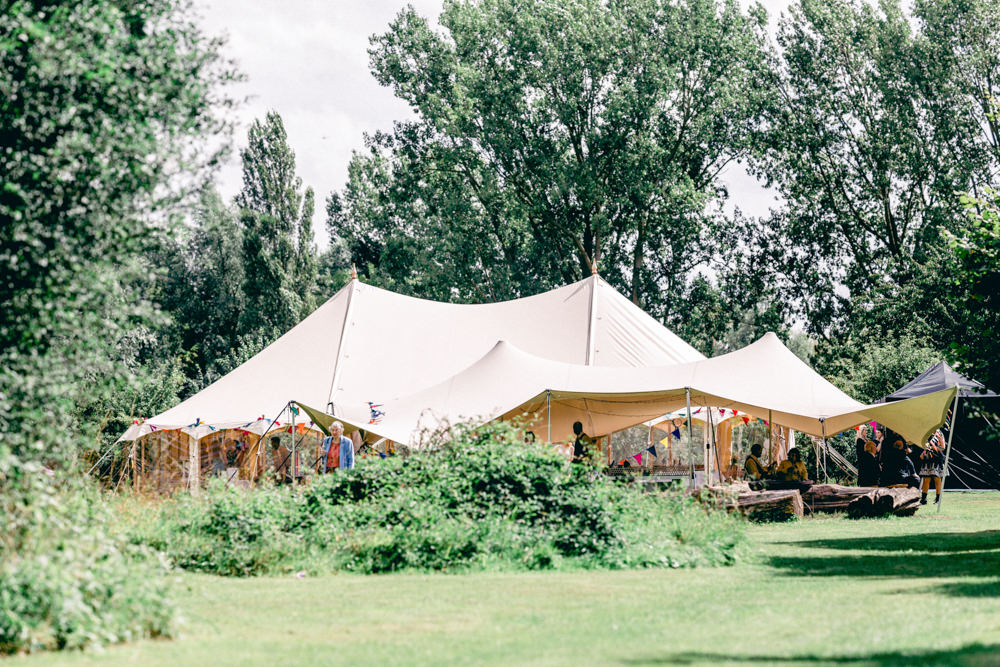 Bride: I got my dress from The Wedding shop in Colchester after being recommend by a friend who had tried them all. They were also great. I only tired on about 8 dresses and I knew that the 3rd on I tried on was the one for me. But I also had wanted it shortened, as I had already bought pink glittery Kate Spade trainers for the day and knew that if it was muddy that a long dress would ruin it for me. I also knew that people had expectations of what they think I was going to go for but wanted to feel like me but with a little shock factor. The pattern on my dress was beautiful and the me part and the open back was the shock bit.

Groom: Being Scottish he knew that he wanted to wear a kilt and so did his 2 best men. After googling for a place to rent them from he settled on MacGregor and MacDuff. There was a pop-up shop in Shoreditch that provided amazing quality kilts and had a lot of options. It was a great decision and really added something to the day. The kilt was a modern tweed style rather than the traditional style so this was perfect for the first time wearing one. I would highly recommend MacGregor and MacDuff, the kilts were very reasonably priced and were fantastic quality, they even delivered them to your door and picked them up afterwards.

The groomsmen Terry and James are Stewart’s 2 best friends from school and have all been friends for 17 years. Their outfits were also from Macgregor an Macduff and were very excited to be getting to wear the kilts.

Katie was my maid of honor, we also have been friends since school and also only got her dress about 2 days before the wedding after properly trying on more then me. It was from ASOS. 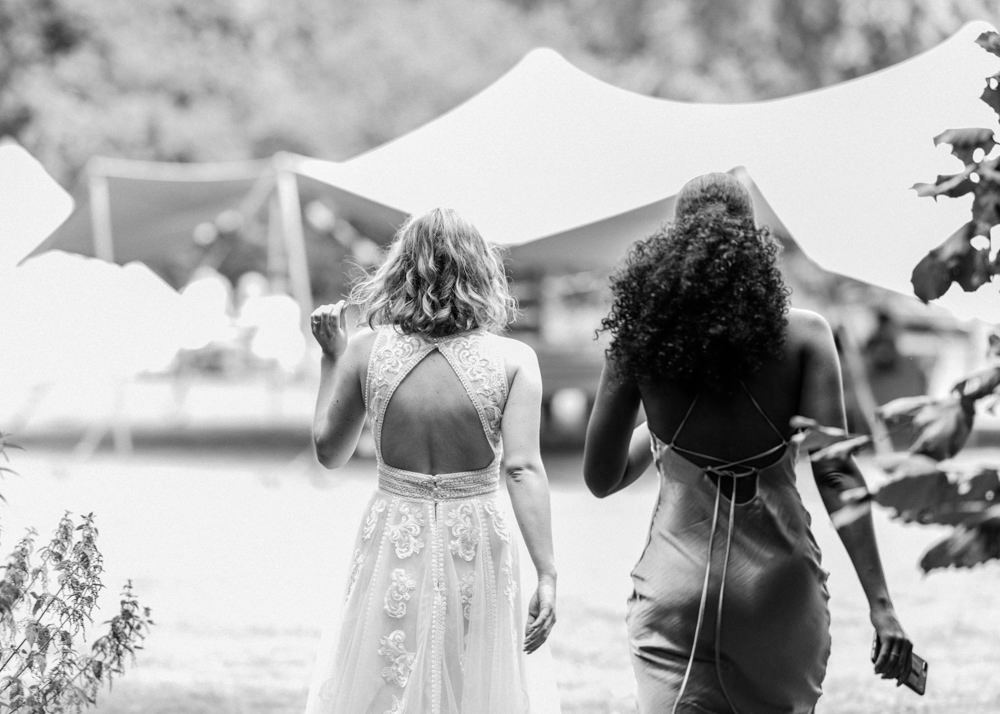 Hayley Jayne Photography. We choose Hayley for her style and not being intrusive on the days. And her photos looked amazing, and when we met in person she reminded me of my friend so the deal was done but also at this meeting she had brought the most amazing wedding album and it was the most beautiful thing I’d seen in ages and knew I wanted this in my life. But she was great with me and Stewart as we are not very good at having pictures taken and don’t do it a lot. But she made it fun and easy. 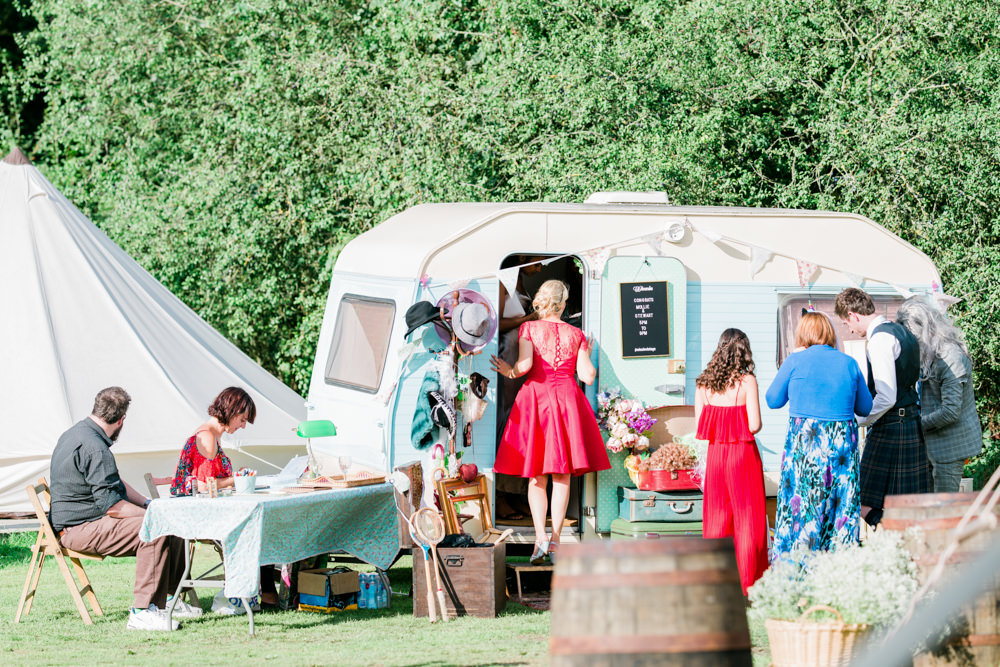 We went to New York for our honeymoon but we went in September as this was also the brides 30th birthday. We had previously travelled America but got caught up in a hurricane so left early. So we decided to finish off that trip.

Seeing the venue in sunshine for the first time on the actually day as it was always raining when we had gone and was raining up until 6 am on the day itself.

Telling each other the secret vows we had made each other.

Remember in England you can’t get married outside legally.

It’s worth all the stress.

Only your opinions matter.

Have fun because it does go by in a flash.

Mollie and Stewart, thank you both so very much for sharing your really special nuptials with us xo Lou