Style in spades today courtesy of WWW readers Alastair and Victoria and their crazy hot wedding held on the 26th August 2017, which just happened to be the hottest August Bank Holiday on record. Wow! They chose the date as it fell in-between both of their parent’s 40th wedding anniversary’s, how amazing is that? It sure did kick off a personal day, with so many thoughtful and personality packed elements infused into their celebrations. For example they ditched traditions which weren’t authentic to them as a couple, with no wedding cake or bouquet throwing to name a few. They also saw each other in the morning as Alastair had an amazing gift for Victoria. It’s just the kind of ethos we love to read about here on Whimsical Wonderland Weddings.

Emotional, personal and ravey was how these two summed up their day and it sounds so fun yet meaningful. The evening rave really came into it’s own thanks to their DJ and WWW faves Warble Entertainment’s Soulfire live band. They also injected their personality into the decoration with a gorgeous luxe gold colour scheme with literary touches and boozy favours. Talking of gold, how much do I love the sequin mismatched bridesmaids dresses?! Gorgeous! The gents really looked brilliant in their formal tuxedos too. Alastair’s double breasted cream jacket and loafers combo is so on trend. Meanwhile Victoria looked effortlessly beautiful in her Pronovias dress and veil, sensational!

Marianne Chua Photography, thanks ever so much for sharing these vibrant and gorgeous photographs with us. 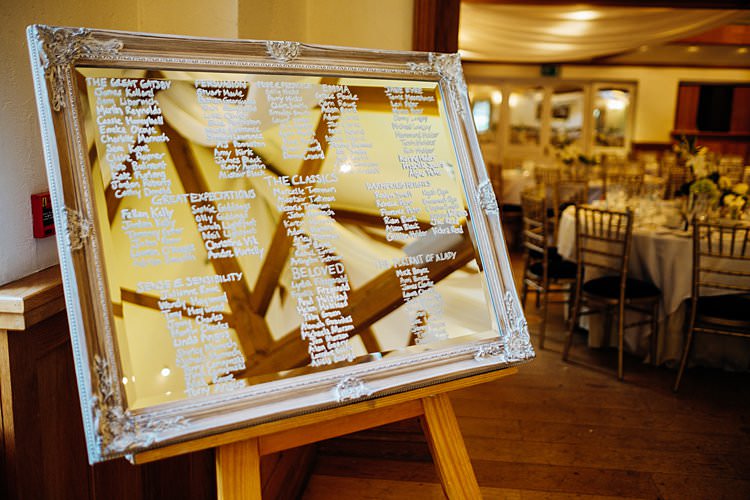 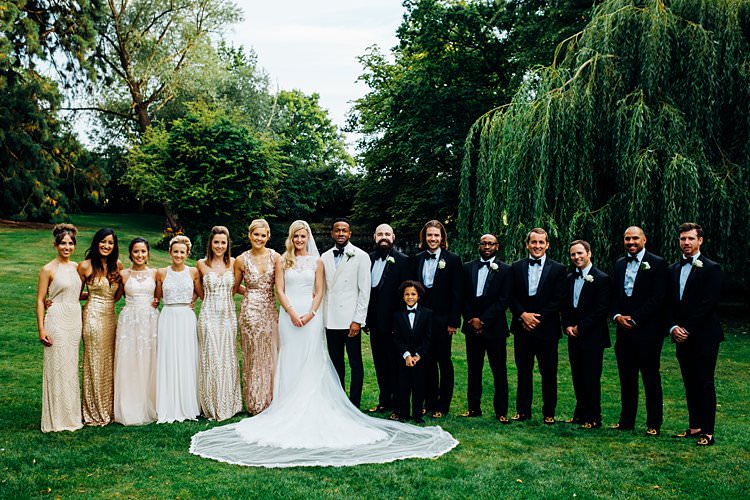 THE PROPOSAL | The groom made up an elaborate story that they were going to a spa weekend in Scotland for their five year anniversary after having a fight the night before. He hired a car from Aberdeen airport on arrival. After driving through fields for what seemed like hours, Victoria started to get the feeling Alastair wasn’t admitting he was lost. She finally snapped and said she’d get out the car to ask for directions and walked up a dirt road, with Alastair following behind. At the end of the road, she looked round and saw fields of cows and a church, then realised it was called Church of Marnoch. Alastair then pulled out his iPad, which played a video with the last 5 years’ worth of pictures together to music, the last three pictures were of the engagement ring being made and that’s when Victoria twigged.

Afterwards they went to the hotel spa and tried to call Victoria’s parents who didn’t answer for hours, which she couldn’t understand as Alastair told her he’d asked her dad for her hand in marriage. When they were both sitting at the hotel bar drinking champagne the bride’s parents walked in. Alastair had secretly flown them up to Scotland as he knew she’d want them there.

THE VISION | Church, food, party. Make the three things most important to you the focus and the rest will follow.

They wanted the church ceremony to be personal, a true celebration and all about them. They didn’t want to have to do the usual wedding things just because they were traditional so skipped on the wedding cake, throwing the bouquet, matched bridesmaid dresses, ‘Love’ signs, Mr & Mrs signage, hearts everywhere, videographers, boring ‘stand in a line and smile’ photography and the bride sitting quiet while everyone else did their speeches.

Alastair also came to see Victoria the morning of the wedding to give her a wedding gift (an old school suitcase filled with photos of them both growing up – one for every year they’d known each other and gifts including: her favourite Anthropologie candle with the words “When you blow this out it will be time”, Agent Provocateur underwear, a blue Jigsaw backpack she’d kept in an online shopping basket for months but never bought, an Olivia Burton watch in their wedding colours, a bangle).

THE PLANNING PROCESS | Unrushed and relaxed. Long engagement of 18 months to plan, enjoy it and take their time. Victoria took Alastair to see 14 venues but nothing seemed quite right until Mulberry House.

BUDGET | They didn’t really have one. They saved a lot and had 18 months to do so, but didn’t want to feel constrained.

THE VENUE | Waltham Abbey Church, Essex: Where the bride’s parents got married 40 years before.

Mulberry House, Ongar, Essex. It had lots of different rooms so they had the wedding breakfast in one room and the party in the other. It was also important that the party room had a bar in it so not to break up the atmosphere. They also hired out the entire venue so they could have it to themselves.

FINDING THE DRESS | She saw the wedding dress she wanted online but thought it was too expensive. So went to lots of different shops and although there were many that were lovely she couldn’t quite stop thinking about

GROOM’S ATTIRE | Suit was made to measure by Thom Sweeney in London. Shoes from Baudoin and Lange London. Watch is an IWC Portuguese.

THE READINGS & MUSIC | A love poem between two lovers – Biblical / The portrait of a lady – One of the bride’s favourite books.

BEAUTIFUL BRIDESMAIDS | One of Victoria’s bridesmaid asked if she could wear a floor length gold sequin dress and so it was decided that would be the colour theme; gold, black, white and mint green.

She had six bridesmaids in total, all the dresses and shoes chosen by the bridesmaids from ASOS (Victoria gave them a budget and a colour scheme of anything between white and gold and let them do the rest). Shoes were gold strappy sandals from ASOS. She bought them personalised necklaces from Maya Magal with their first name initial.

THE FLOWERS | Venus in Flowers, Theydon Bois, Essex – where the bride worked as a Saturday girl from the age of 14.

THE CAKE | No Cake – they didn’t see the point with all the food and two lots of evening food (traditional English and Caribbean BBQ).

YOUR PHOTOGRAPHER | Marianne Chua – there is no one else.

THE DETAILS & DÉCOR | Church: Flowers by the Church florist named Margaret, lanterns and candles owned by the couple, buttonholes and corsages by Venus in Flowers. They also had bubbles instead of confetti.

Mulberry House: Table place names, table names, vases and candelabras were made or designed by the bride and she spent months collecting antique ‘granny’ glass vases and gold brass vases from charity shops. Flowers were by Venus in Flowers, all different heights and types. Backdrops by Wilma Event Design. Caribbean Food Pop-up by Mamas Jerk. Personalised favours of mini bottles of alcohol. The bride decorated a ladder with photos of all the guests that were celebrating their wedding anniversaries and birthdays. The table names were Victoria’s favourite books (she studied English Literature at university) and she covered each one in paper and used gold lettering. She also underlined her favourite lines from the novels.

THE HONEYMOON | Mini moon – Private Charter Sailing from Mykonos to Santorini with Off the Beaten Tack. Main moon – Safari in Tanzania and Beach side in Zanzibar.

MEMORABLE MOMENTS | Bride walking down the aisle, Groom’s father taking part in the ceremony (officiating the vows as he’s a Reverend). The drive together from the church to the venue (Alone, the bride and groom drove in the father in laws classic car), the first tables shouts of laughter as drinking games ensued, the Bride’s speech, the Groom’s speech, the Father of the Bride’s speech, the rave.

Rings | Karl Karter Jewellery – Alastair’s friend who made the engagement ring and the wedding rings.

DJ | Simon Cabrera, London DJ’s – the DJ who also provided the black and white dancefloor, the lighting, the RAVE sign, the DJ set up.

The most excellent Gospel choir | Get Gospel

Go Pros | Xtreme Hire – they hired for the guests to make their wedding video.

Hire | Furniture Hire UK – for the couches, coffee table and bar tables for the marquee.

What a brilliant celebration.

Alastair and Victoria, we cannot thank you enough for sharing your gorgeous wedding with us xo Lou