Iona and Mark had toyed with the idea with having an intimate wedding and a separate party to celebrate with family and friends so it’s no surprise that when they decided to have one big event after all, it was a relaxed affair without too much formality.

They chose the 30th June 2018 for their nuptials, which consisted of a humanist ceremony at the stunning Leith Theatre followed by a reception at the Strawberry Barn in Dunbar. Our pair wanted the day to be about their relationship and unstuffy, doesn’t it look like everyone had an absolute blast?

I adore the simple elegance of Iona’s Charlie Brear gown, isn’t it just magnificent? In fact the whole wedding party doesn’t disappoint in the fashion stakes, with the bridesmaids wearing mismatched dresses from WWW faves Rewritten and the gents in their smart kilts.

Jen Owens Images was on hand to capture these marvellous images, thank you so much for sharing them with us Jen. I think you’re going to love the rich colours and fabulous lighting, take it all in WWWers!

While on a skiing holiday in Val D’Isere, France Mark proposed on Rocher du Charvet. 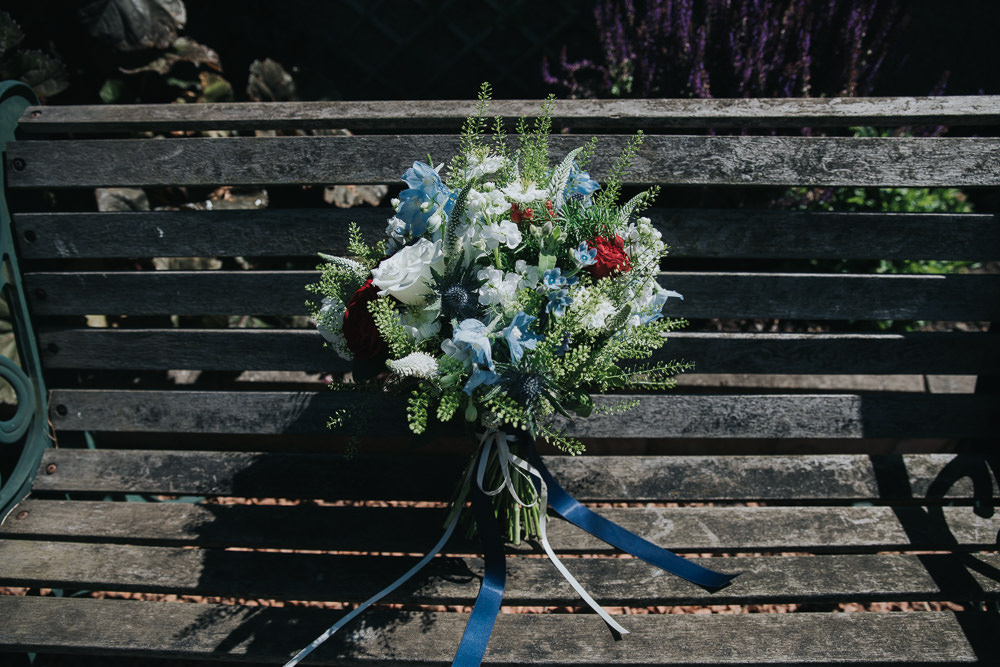 Both of us wanted a wedding without too many formalities which is why we decided to have a humanist ceremony. Iona grew up in Leith, Edinburgh and wanted to find somewhere there that they could get married. This is why we chose the Leith Theatre as the location for our ceremony. The aim for the evening was somewhere that was laid back and had the space for dancing. When we saw the Strawberry Barn we knew it would be the ideal space. The barn was already pre-decorated and had its own caterers which made the planning so much easier as we live in Aberdeen.

Once we were engaged we were undecided about size of wedding we were after. We had initially thought about having a wedding with just immediate family and then a party separate with the rest of our families and friends. This led us to the idea that we could have a wedding which wasn’t too traditional and also a big party.

After we decided this, we decided on getting married in the Edinburgh area, where Iona was from. Her dream to be married close to her parents, so when we discovered the Leith Theatre it was perfect.

The next big decision was deciding where to have our reception. There was the option to stay at the Leith Theatre, but after discovering the Strawberry Barn, despite being a drive out of town, it was going to fit our ‘party’ wedding theme.

We definitely had a fixed budget and were immediately put off by the quotes we received from traditional wedding venues and hotels. We kept costs down by collecting whisky and gin bottles to make lanterns, built our table decorations with bits and pieces from Ikea and had Mark’s Mum make beautiful hessian table runners for all of the tables.

Leith Theatre, Edinburgh – we decided to get married in the entrance foyer of the Theatre, a beautiful art deco space where we could get married at the bottom of the stairs. It was possible for us to use the back staircase, so when the bridesmaids, Iona and her parents arrived at the venue, they could use these to get upstairs, and then use the main staircase to make their entrance instead of an aisle. Iona walked down the staircase with both Mum and Dad, rather than just her dad.

We then managed to have photos in the Leith Theatre. Currently money is being raised to help renovate the Leith Theatre, so it was amazing to be able to get photos taken in the theatre after the ceremony.

The Strawberry Barn is in Dunbar, so buses were there to transport people along the East coast. The weather was beautiful, so on arrival people could have welcome drinks outside.

The barn already comes pretty well decorated, with drapes, fairy lights all around and bunting. So there was not a lot to do.

Bride: Dress – Charlie Brear from Lamesley (this shop has now shut due to the owner’s ill health)
Shoes – Dorothy Perkins , I loved the sparkly heel. A shoe great for dancing!
Jewellery – Earrings were a present from Mark on the day of the wedding from Finnies The Jeweler in Aberdeen

Groom: Kilt and jacket from R & I McDonald Kiltmakers in West Calder. This is one of the best kiltmakers where everything is handmade to the highest standards. Mark wanted a very traditional day-wear outfit and had a new jacket and waistcoat made for the occasion. The outfit was finished with a pair of Loake Ashby brogues and a Dalvey pocket watch (a present from Iona).

Hair at Austen Thomson – this is Iona’s usual hairdresser. All the bridesmaids had loose curls and Iona had her hair up in a low knot with couple of small flowers in her hair.

M&S – this was another simple way to keep costs down, and M&S cakes are always good.

Petals by the shore in Leith. They did beautiful bouquets, buttonholes and flowers for the mothers as well as foliage down the banister of the central for the table decorations at the barn, flowers for the signing table/top table and a flower arrangement for the middle ticket booth of the Leith Theatre (we had amazing family friends who helped transport flower arrangements from the Leith Theatre to the Barn.

Bridesmaids: Rewritten bridesmaid dresses, in 4 styles (Mykonos, Vienna, Florence and Havana top with long skirt), each one different, but all in chianti colour. All the girls wore their own shoes with their dresses.

All of their own kilts with the jackets and waistcoats from R&I McDonald Kiltmakers.

Flowers were very natural and full of greenery.  The table decorations were rustic and earthy with handmade hessian runners, candles inside lanterns (from Ikea) on tree cut blocks (provide by venue) and lots of greenery around it.

Honeymoon to South Africa, we want to wait until their summer so we aregoing in November 2018. Straight after the wedding we went on a mini-moon to Portugal, Cascais and Lisbon.

Iona’s brother Garry’s amazing dance moves.
The dancefloor being full all night with the fantastic band The Invitations keeping everyone dancing.

Have a go at doing things yourself wherever you can. Have a simple plan from the start and stick to it. Focus on the a few key things and put your effort into doing these well.

Flowers
Petals by the Shore

It looks like you really did have a lot of fun! Thank you so much Iona and Mark for sharing your day with us. Rachel x