Star Wars fans, this one is for you.

WWW readers Lyndsey and James were married on the 19th March 2016 at The Electric Cinema followed by a reception at Fazeley Studios in Birmingham. Their wedding was alternative through and through and it was important to them that the celebrations were far from boring. With a fun Star Wars theme, bride Lyndsey surprised groom James with a bridal party dressed as Storm Troopers and Chewie and a light saber exit to the ceremony. It didn’t stop there, with an R2D2 cake, comic book paper flower buttonholes, Star Wars music and brilliant posters too . It looked as though the guests had an utter blast.

Lyndsey wore a stunning sequin adorned dress she bought from House of Fraser teamed with you guessed it, Star Wars nail art and a fur shrug was her late Grandmas. Didn’t she look stunning? Enjoy this folks, it’s a really memorable day.

Thanks to Vous Photography for providing these sensational photographs with us. 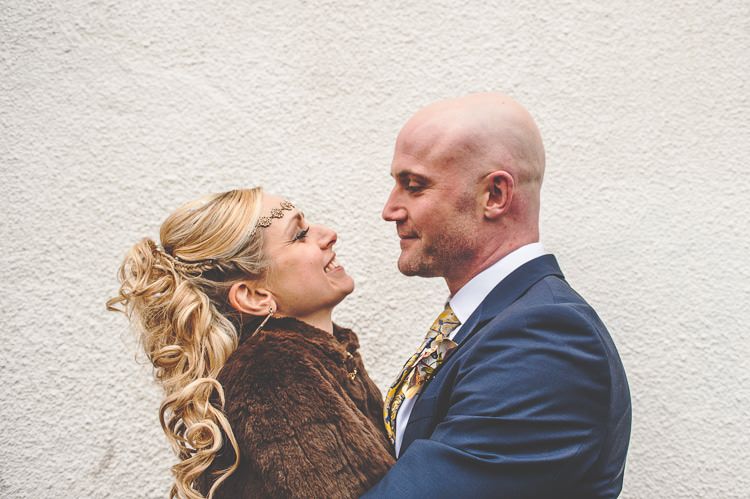 THE VISION | On our 2nd date, James said that if he ever got married, he’d like a Star Wars wedding. I was horrified….. I never wanted to get married! (The star wars bit didn’t scare me at all). So after overcoming my fear of marriage (because I’d obviously found the right man) then I insisted the wedding had to be fun, light-hearted and NOT AT ALL STUFFY OR TRADITIONAL.

THE PLANNING PROCESS | Errrr, leave everything to the last minute and then panic. Then delegate as much as possible. I had a lot to plan secretly behind the scenes, that James didn’t know about. I had secret meetings with my friend Jon, aka Chewbacca, and we rehearsed the bridal procession in my kitchen with my little boy, aka (K)obi-Wan, while James was at work.

BUDGET | Cheaper than you think! A brilliant Mum with her glue gun, friends and favours, and leaving it to last minute meant we negotiated some great deals.

THE VENUE | The Electric Cinema, Station Street, Birmingham then onto Fazeley Studios, Digbeth. Sam, the operations manager at the cinema was a total dude, and so helpful. Abbi, the events manager at Fazeley, was brilliant, and was so reassuring when we were in a panic.

THE DRESS & ACCESSORIES | The dress was from House of Fraser, Adrianna Papple design. The fur shrug was my late Grandmas, that she wore when she got married in the 40’s! The headband and matching belt were from Primark. Dr Martens boots and Adidas customised Star Wars shelltoes ordered online. I have great contacts and one of my besties is a beautician. She really enjoyed painting my nails with the Star Wars characters, which completed the look.

FINDING THE DRESS | I was terrified of going to a bridal shop. The thought of a white meringue dress scared the poop out of me. In fact, the thought of any white wedding dress scared me. I did find a lovely bridal shop and a very lovely dress for £2250, but it was still white and I couldn’t justify the money. Instead, I ordered 10 dresses from various shops online, tried them all on in the comfort of my own home and simply sent back the ones I didn’t like.

GROOM’S ATTIRE | Again, left until the last minute, so a quick trip to the Hugo Boss shop in Cheshire Oaks retail outlet sorted him out.

THE READINGS & MUSIC | Obviously Star Wars music was a must. I walked into the main opening titles, and we walked out to the Star Wars Ceremony room music. We didn’t want to bore our guests with readings, however, our Registrar was such a dude…. during my interview he gave me a piece of paper and asked me if I wanted him to read it to James….. titled “Size Doesn’t Matter”. It was so nice that he’d done that for us of his own accord. The Registrar really did make our ceremony so much fun. The reading was, of course, a quote from Yoda, and the Registrar even put on his best impression of Yoda while he read it.

BEAUTIFUL BRIDESMAIDS | No way was I having traditional bridesmaids in boring traditional matching dresses. Some of my best mates are men so my idea of having Storm Troopers and Chewie worked perfectly, although 1 storm trooper was female, and she rocked!

THE FLOWERS | Boring wedding bouquet….. I don’t think so. I loved the idea of comic book paper flowers, which we got made by a friend for the buttonholes for the guys. I was going to have a light saber with paper comic flowers, but decided that I’d be restricted by having to hold something all day.

THE CAKE | Wow what a cake. R2D2! My bestie made the cake for us. We decided to have the most decadent chocolate sponge for the top layer, a fruit cake for the middle, and the bottom layer was made up of our favourite, treacle and Bakewell tarts. The top layer was so heavy she had to use two cake stands and tape it on. Luckily the R2D2 design meant she should disguise the stands with R2’s legs.

YOUR PHOTOGRAPHER | The one and only Rob Farrell. His website caught our attention straight away. After a meeting with him, we knew that he “got us” and as he had photographed at both the cinema and Fazeley before, we knew he would be perfect.

THE DETAILS & DÉCOR | All the décor at Fazeley was organised, purchased and ‘blinged’ by my wonderful Mum; cheap vases covered in ribbon and sparkles from the local market. She did a wonderful Star Wars sweets table and even got a life size cardboard cut out of C3PO and R2D2 from eBay.

The Star Wars wedding posters were done by another friend, who happens to run a graphic design business from home. She was amazing, and she also made sure the files could be shown on the big screen at the cinema as our backdrop for the ceremony.

We had a montage of clips from the old Star wars films playing on the big screen while we signed the register. We hired a wonderful string quartet who played at our drinks reception at Fazeley, they even played Star Wars theme and the Cantina band for us. For the evening entertainment we hired a local soul band, they were amazing and the dance floor was packed.

Wedding favours were charity pins from our chosen charities, Cancer Research UK and The Retired Greyhound Trust. We have two retired greyhounds who we would have loved to dress up in ATAT costumes, but they are a bit old for all the excitement now.

THE HONEYMOON | A secluded lodge on the hillside, just outside Dumfries and Galloway, with a hot tub. We were buzzing so much from the wedding that we couldn’t sleep for most of the week.

MEMORABLE MOMENTS | We had some resistance from family when we mentioned we wanted a Star Wars wedding at a cinema – they didn’t understand our vision. So I organised the Storm Troopers, Chewie and my little boy to wear his Jedi cloak as a surprise for everyone, including James. This meant he couldn’t get in trouble for it. I’m told that his face was a picture when Storm Troopers walked down the aisle as he was expecting to see me. Then followed by a 6’7 Chewbacca, his mind was blown. I didn’t get to see his face though, as I was last to enter. I was escorted by my Dad, who wore a black Emperors cloak and held a red light saber.

I’d also arranged a light saber send off, and a few little helpers gave light sabers to the guests in secret, while we were signing the register, so James didn’t . When James and I walked down the aisle after the ceremony, we walked under a archway of red and blue light sabers. Was truly a memorable moment.

I wish I had been around while the guests were gathering too, as we hadn’t told anyone that it was Star Wars theme. I can imagine there was some very shocked faces.

ADVICE FOR OTHER COUPLES | Do what you want, don’t listen to or be pressured by family or friends to have the same boring wedding like they did. We converted our family, and they have all agreed it was the most fantastic day ever. It was about us, our love for each other, and no one else.