We’re off to Scotland this fine Friday for Lauren and Jack’s glorious wedding celebrations, which were held on the 14th April 2018. This lovely couple were hitched at The Lower College Hall, St Salvator’s Quadrangle in St Andrews and then headed to Crail Community Hall for their reception. The reception venue was decorated so lovingly and extremely beautifully in a scandi chic style, think minimal yet cosy, with foliage and muted tones, plus a lot of atmospheric fairy lights. So stunning! I especially adore the epic suspended greenery backdrop to their top table, what a way to enjoy their first meal as a married couple.

They planned their wedding in six months, which gave them enough time to plan all the details and some really personal touches. I especially love how they included things that they already owned, along with possessions of their parents in the décor, plus they added scent to the room, which sounds just amazing. Guests were treated to coffee and brownies and a live band come evening too, how brilliant.

I leave you with this super stylish pair and their stunning wedding images by Ross Alexander Photography, thanks so much for sharing them with us Ross. Enjoy!

Lauren: The proposal came as such a shock to me. I never expected to be asked and when the day finally arrived (we had been together for 11 years) I was very pleased! I came home looking dishevelled from a yoga class on a typical Tuesday evening. When I arrived home my front door was locked, which to me meant Jack had gone out. I unlocked the door to find the house in darkness and lit by candles. The candle trail led from my front door to Jack standing in our living room holding a ring box. I was excited and shocked I didn’t even look at the ring! We went to Paris the next day for a mini break and kept our engagement a surprise from our families until we returned which made the weekend very special – only the 2 of us knowing we were getting married!

Although the engagement was a shock, I (Lauren) had been planning my wedding and knew roughly what I wanted. Living in London but from Scotland I knew I wanted to get married in Scotland. We picked our 1st holiday destination as a couple: Crail, a little fishing village on the East Coast of Scotland. The vision was: fairy lights, candles and as many flowers and greenery as we could fit in (and afford!).

We didn’t want a long engagement so planned the wedding for the nearest date that most guests could manage. We had just over 6 months. In the first month we found all our suppliers and booked everything in, which meant for the remaining time I could concentrate on how the venue would look and feel.

We managed to get everything we wanted within budget which was great. We kept our expectations modest so didn’t feel like we had to compromise on anything. This did require a lot of creativity, family input and imagination to make it all happen!

We wrote our own speech for the registrar to read out which said a little about us and had two readings: “Falling in love is like owning a dog” and “I carry your heart with me. I carry it in my heart”.

We had a string quartet to play me down the aisle which played ‘Hey There Delilah’. Walking out they played Iggy Azaleas ‘I’m So Fancy’.

We had an amazing band in the evening called The White Doves and then at 10pm 2 of Jack’s groomsmen DJd until the wedding finished – the dance floor was full from the moment the band started until we played Loch Lomond at the end of the wedding!

I had 4 bridesmaids, their dresses were from ASOS.

The groomsmen were given free reign which resulted in a mix of kilts and suits. I gifted them all the same Walker Slater tie and pocket square as I was wearing. This created coherency across our outfits.

Lauren; I wasn’t overly precious about a wedding dress. I knew what I wanted but didn’t want to spend the entire budget going on one dress! I happened to stumble across a second-hand dress website and found my perfect one. I met the owner in a shopping centre car park, had a quick try on over my work uniform and between my friend and I decided it was the one! With altering and some TLC it was perfect.

Jack; my suit was bought and altered from Walker Slater in Glasgow. It is the Edward suit in grey Shetland wool with Donegal pattern. I’m a skinny guy, so the trousers were expertly tapered to my tastes. The suit was complimented by a bottle green wool tie and silk pocket square also from Walker Slater.

My hair was done in a local hairdresser. Once all my bridesmaids had arrived at my childhood home to get ready, I quickly nipped off to get my hair done.

The bridesmaids and my make up were done by Rachel Crowe and I loved it. It was very natural and lasted all day.

Ross Alexander was our photographer. I could not recommend him enough. He captured our day perfectly. His style was informal and his vision fitted exactly with ours. We snuck down to the harbour side to get some photos, which created a beautiful backdrop and the sea to the other side with the waves crashing behind us.

We have since had so many compliments from the guests about our photographs.

It was a community hall in the East Neuk of Fife which doesn’t sound particularly glamorous, but it was far from the imagined community hall. It was an old church building with huge roof height, elegant church windows and a beautiful stained glass window behind the stage. It was a blank canvas with a separate room to serve food, buffet style. Everyone told us that the venue looked like a fairy tale when they walked in; full of greenery and flowers, smelling of greenery and as many fairy lights as one venue could hold!

The cake was made locally in Broughty Ferry and we had the florist create something to sit on top. It was a sponge cake covered in Italian meringue icing. It was delicious!

The flowers were done by The Country Garden Company in Cupar, Fife. Amanda and her team did an amazing job with fabulous table displays, bouquets and some other flowers.

For the rest of the flowers were bought by us. We stopped by Tesco and spent £100 on bunches of flowers and absolutely filled the hall with foliage and flowers, every inch was covered, even the toilets.

Jack’s uncle, Stuart, created a greenery roof structure for us that hung in the middle of the room covered in real and artificial ivy with white flowers wrapped round and fairy lights. It hung quite low and was the main feature people saw as they entered the venue. 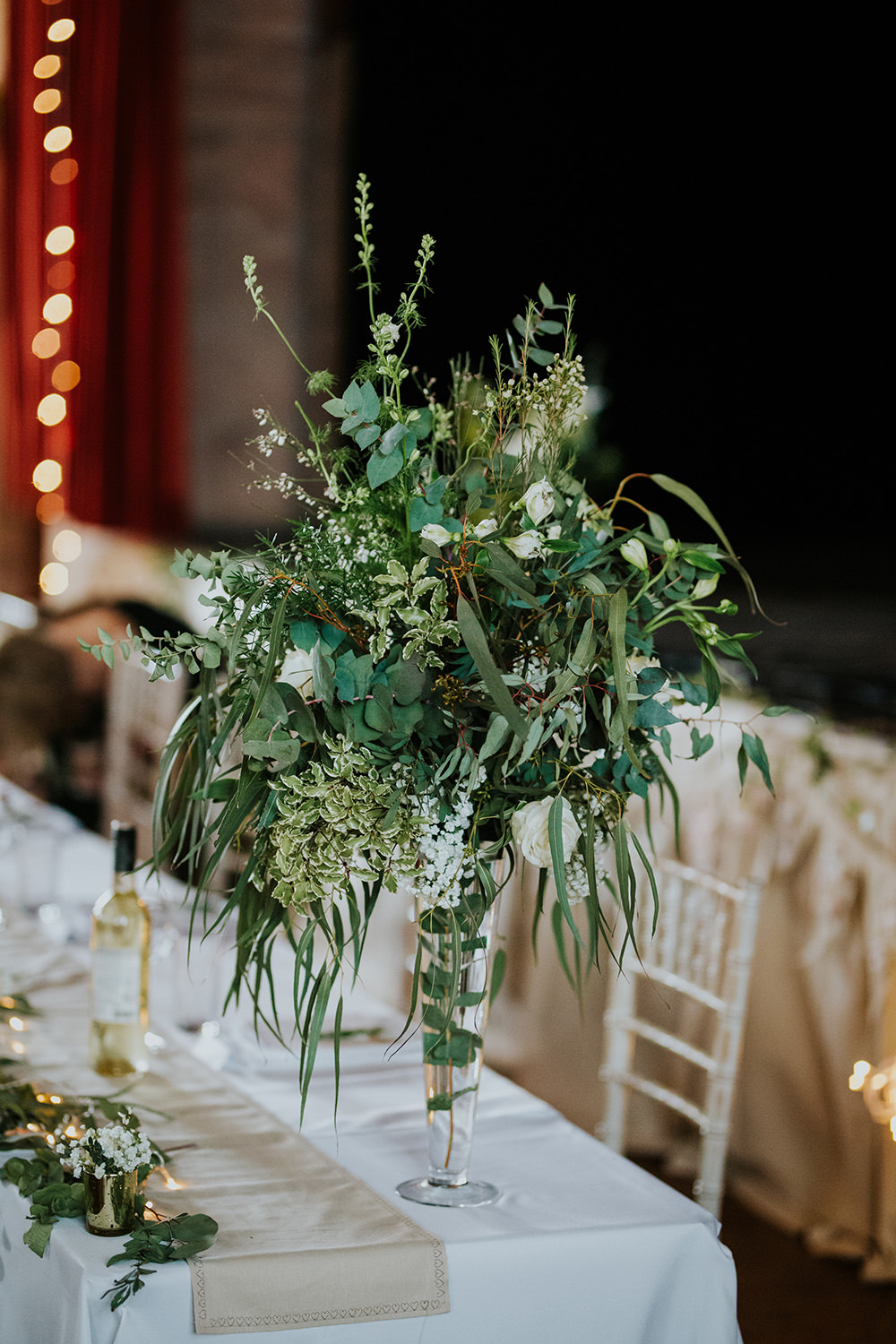 I used things that my parents, in laws and we owned to decorate the hall which included big Scandinavian lanterns, dried eucalyptus, 160 strings of fairy lights, loads of vases filled with flowers and candle holders. We had air diffusers puffing out a beautiful scent; Hedgerow by Join London, which created a lovely planty smell to the room.

The theme I went with was white and green – no colour! The tables were decorated with wooden logs which Jack’s uncle, Stuart, made for us from a fallen down tree! We covered the table in fairy lights and wicker baubles and clear plastic baubles filled with artificial moss that went down long banquet style tables.

We had a mini-moon to Cinque Terre and Florence in Italy in June but plan to take go on honeymoon next year in Vietnam and combine it with us both turning 30.

Everything from the day before planning and creating the space from nothing into something amazing to walking down the aisle, to dancing the night away with our favourite people.

Make the wedding a reflection of you as individuals and as a couple. It’s your one chance to have a big party surrounded by the all the people you love so make sure you and your guests have an incredible time.

Side note; it is possible to plan a wedding in 6 months if you want to, despite what wedding venues may have you believe!

Goodness me, so gorgeous! And all those outfits too… beautiful.

Lauren and Jack, thank you both ever so much for sharing your wedding story with us xo Lou