This super sweet summer wedding was the culmination of a lot of love and effort by the couple themselves and their loved ones.

Hannah and Joe were married on the 4th June and held their day in a walled garden owned by a friend. Opting for a marquee wedding meant that they had to organise everything from toilets to cutlery and everything in-between, and all within a 10 month time frame. Their vision was simple, a country garden relaxed vibe with a traditional feel and boy oh boy was their day pretty.

There were gorgeous fresh natural style flower arrangements in purple and blue tones, travel inspired touches and even a bicycle made for two. Hannah looked amazing in Maggie Sottero‘s ‘Juniper’ gown, which had the most stunning back detail.

Thanks so much to Daniel McClane for sharing these wonderful images with us. 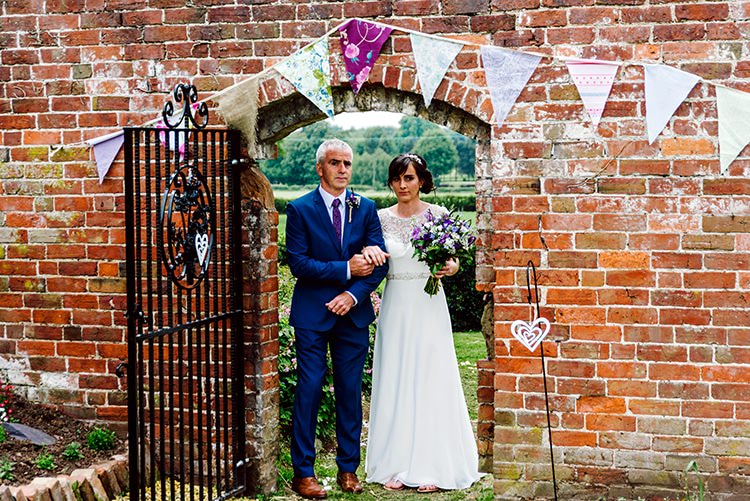 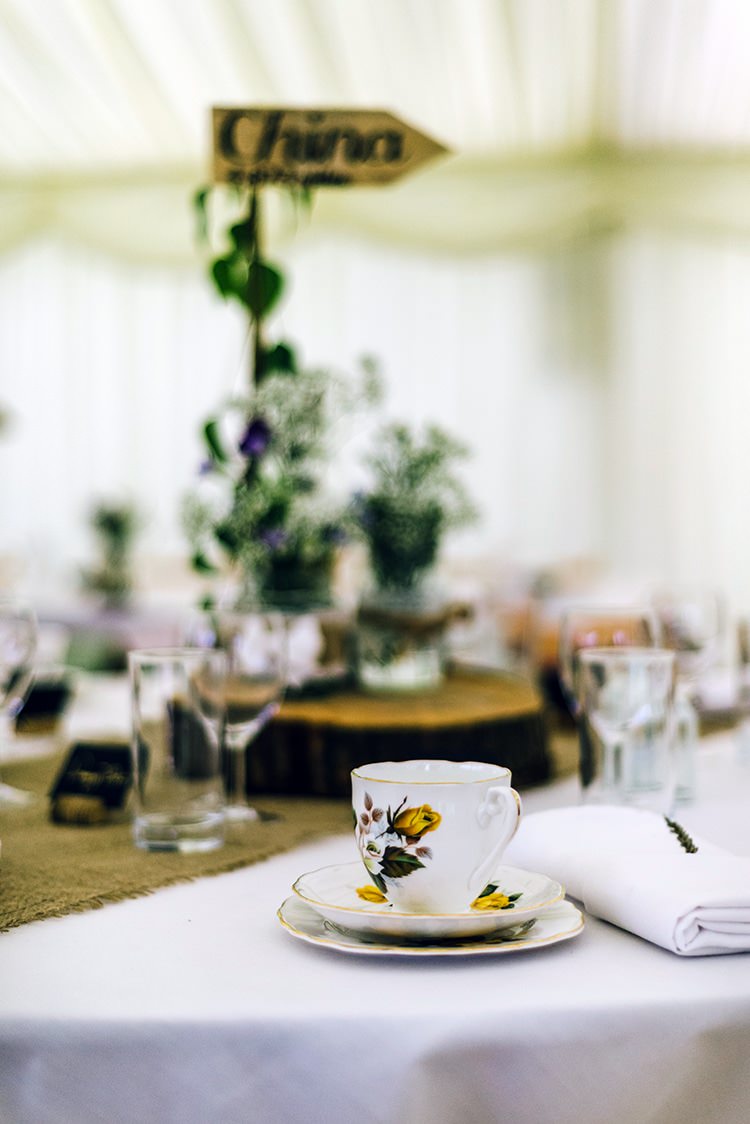 THE PROPOSAL | A treasure hunt of epic proportions took place after a day at the Cotswolds beer festival. Not ideal conditions to be solving riddles! The final clue was an engagement ring.

THE VISION | We wanted to create a rustic and relaxed vibe while also keeping it a bit traditional.

THE PLANNING PROCESS | A rather stressful affair because we had a field to work with and organised absolutely everything ourselves in the space of ten months. From toilets to tablecloths, there’s a lot more to it than either of us had thought.

BUDGET | All in was in the region of ten ish grand (it stings my soul to even type that amount).

THE VENUE | We were lucky enough to have a friend lend us her acre walled garden/field for the day.

THE DRESS & ACCESSORIES | The dress was a Maggie Sottero number called Juniper which I found in a shop called Sense and Sensibility in Stockport. The hair piece was originally a hair slide from ‘Preloved’ which I turned into a headband. My earring were from Accessorize and the bracelet was my ‘something borrowed’ from my Mum.

FINDING THE DRESS | This was quite the challenge! After visiting around 5 different shops and failing to find ‘that dress’ I had almost given up hope. When I tried on the right dress I knew it was the one, although it wasn’t quite the emotional, teary spectacle you see in the movies…I just loved it! It was so elegant and timeless and unlike anything else I had seen.

GROOM’S ATTIRE | This was kept nice and simple by jumping all over Burton’s 2 for £100 suit deal in the Black Friday sale. Win.

THE READINGS & MUSIC | Some close friends of ours provided readings, and a friends band played for us all evening/night. We wanted lots of our mates involved so one of our closest amigos played the guitar during the ceremony. Perfect.

THE CAKE | One mother in law made a traditional fruit cake and the other pulled some wheels of cheese out the bag!

YOUR PHOTOGRAPHER | We put a Facebook feeler out to our friends asking for recommendations for photographers. After checking out their respective work we chose a friend of a friend who ended up becoming our friend. We are super happy with the results.

THE DETAILS & DÉCOR | As we were having the wedding in a garden, we wanted it to be quite rustic and took to Pinterest for inspiration. We kept most of the colours quite neutral, using a lot of pallet wood, lace and hessian with pops of colours from the flowers which were various shades of purples and blues in decorated jars.

We have travelled a lot and wanted to tie this in with the wedding so we used a map as the seating plan and named all of the tables after countries we have been together. The table names were kind of like rustic road signs.

In keeping with the country garden theme, we used hay bales for seating during the ceremony which were moved later on to provide seating for evening guests around tables made of stacked pallets… And lots of candles for ambience.

THE HONEYMOON | Not ones for sticking to the norm, we went to Tanzania on safari and to climb Kili. It’s very high.

MEMORABLE MOMENTS | Where to begin?! There are literally too many to list as the whole day was unforgettable. For a small sample, two of our friends rode a tandem bike on to the dance floor and that same dance floor witnessed a lot of naked flesh after hours.

ADVICE FOR OTHER COUPLES | Do what YOU want and don’t be too influenced by the social norms or what your friends and family tell you to do.

Oh so lovely and those smoke bomb shots are just amazing.