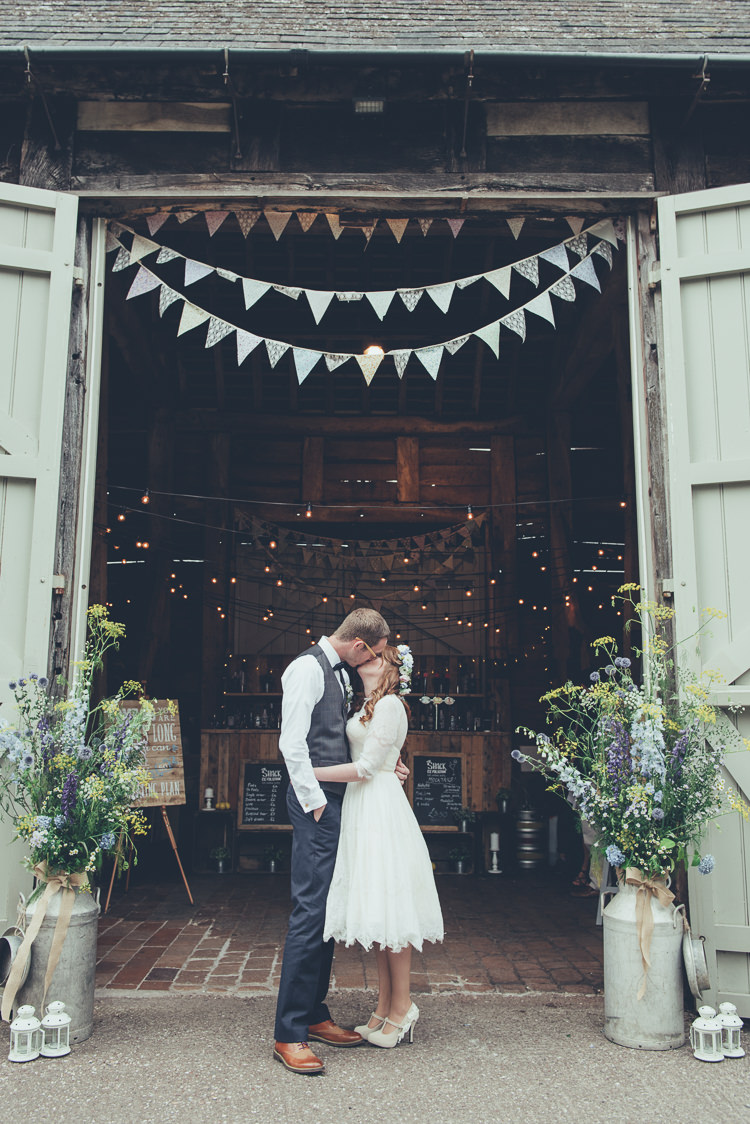 I love how Emily and Matthew didn’t worry about sticking to traditions and rewrote the wedding rule book. They got ready together in the morning and walked down the aisle together. It really set the bar for the relaxed and fun day they envisioned.

10th August 2016 was the chosen date and they opted to hold their celebrations at Pimhill Barn in Shropshire. Their day was the epitome of a rustic home made wedding and the barn was just the perfect backdrop. They crafted much of the wonderful decorations, including fun signage and flowers in jars. They even created a tea room serving home made cakes and DIY honey favours were gifted to guests. Cuisine included ice cream, fish and chips and a hog roast too, how delicious.

Emily’s short and sweet frock ‘Primrose’ by House of Mooshki was just gorgeous teamed with a pretty blue flower crown. Matthew meanwhile opted for a relaxed waistcoat and trousers combo with a quirky bow tie. You’re going to adore these photographs guys.

Lisa Howard Photography, thank you so much for sharing these utterly lovely images. 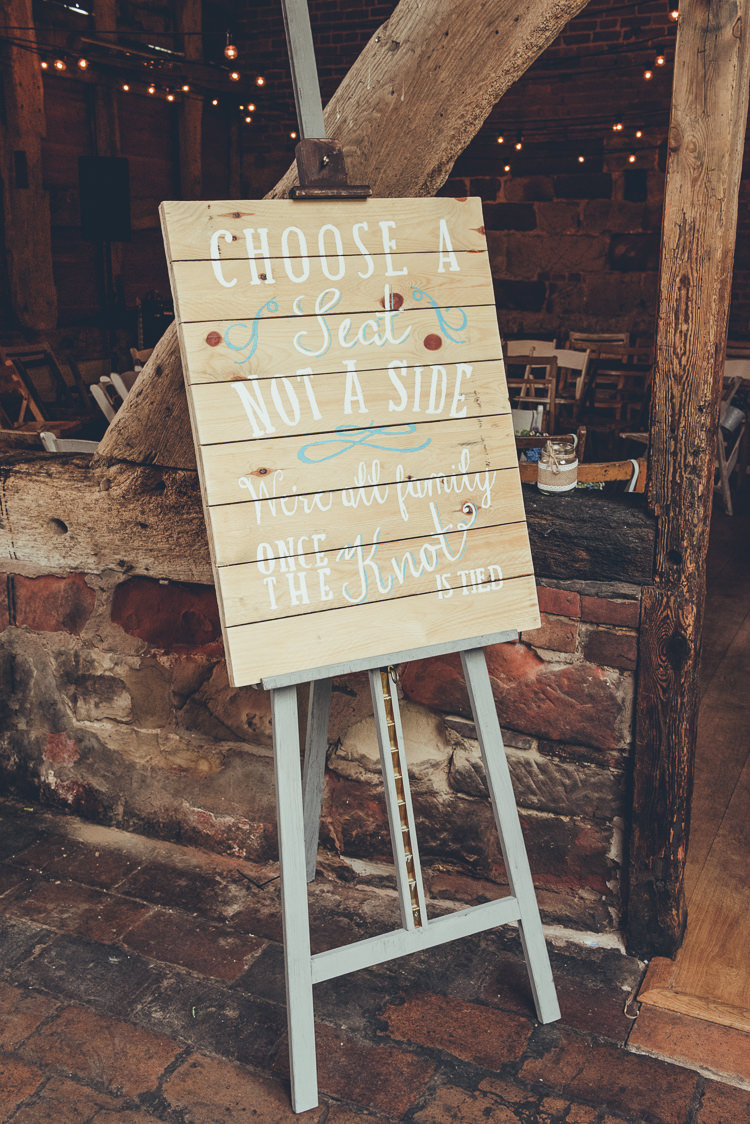 THE VISION | We wanted a rustic, country, vintage wedding set in the countryside.

THE PLANNING PROCESS | Emily planned out everything from the venue and decorations to the addition of a vintage tea room, live band, rustic bar, ice cream van, fish and chip van and hog roast.

THE VENUE | The beautiful Pimhill Barn in Harmer Hill, Shropshire.

THE DRESS & ACCESSORIES | Emily found the dress that she loved whilst recovering in hospital from a serious condition. It was designed by Mooshki Bridal. The dress was called Primrose.

FINDING THE DRESS | After being discharged from hospital after a month Emily and her mother Cath tracked down a bridal store (Cheshire Bridal in Altrincham Greater Manchester) it was important to Emily to find that dress as it had given her hope whilst being seriously ill.

GROOM’S ATTIRE | Matt has never been on for dressing smartly and being very tall found it hard to find anything to fit. His trousers were tailored by Gieves and Hawkes and his waistcoat was hand made by Tom Sawyer waistcoats. Shoes were from Jones The Boot Maker, bowtie from Dobell and shirt from T M Lewin. The outfit was more centred around a more relaxed, country feel than a smart suit.

THE READINGS & MUSIC | Emily and Matt decided against readings at the ceremony as they both agreed that there was nothing worse than a long drawn out ceremony. The music they chose to walk in to, sign the register to and to walk out to were all pieces by “The Show Ponies” – ‘Brother do you love her’, ‘Whiskey and Wine’ and ‘Baby, I’m in love with you’.

BEAUTIFUL BRIDESMAIDS | Emily wanted her bridesmaids (Hannah her sister and Chelsea her best friend) to be happy and comfortable for the day so had dresses made for them by “Plum and Pigeon” (base in Altrincham). They chose the style of dress and the fabrics themselves making them different from each other but still tied in with the whole design of the day.

THE FLOWERS | We wanted wild flowers on all the tables and around the barn and grounds, which were supplied by Matt’s Mother Felicity and arranged by her, Sam (one of Matt’s best men) and the wedding party the day before the wedding. Emily and the bridesmaids had real flower crowns and Matt and the Groomsmen had buttonholes made by Julie Nicholas Florist (Shrewsbury).

THE CAKE | Mat and Em didn’t want a wedding cake as they didn’t understand the tradition behind it so instead Emily and her Mother Cath designed a vintage tea room in the clock house of Pimhill Barn. Matt’s Dad Martin and Mother Felicity baked 18 different cakes catering for different dietary requirements and invited others to bring cakes as well.

They finally met Lisa Howard, a wonderful photographer who understood exactly what they wanted and captured real, spontaneous moments that represented what the day was about.

THE DETAILS & DÉCOR | All credit can be given to Emily for the design and making of the day. Her vision was one of hessian and lace and countryside simplicity.

The hours spent cutting up lace and hessian and gluing the bits to jars, dismantling pallets and turning them into hand painted signs, envisaging the way that the beauty of the barn should be built upon and translating that into the finished product was a labour of love for her. Having since been described as a wedding from a Midsummer Nights Dream.

THE HONEYMOON | One thing that Emily and Matt had decided was that there were to be no wedding gifts. Having been together for nearly 8 years and living together for so long they explained that they had all they needed. Instead a board was designed in the style of a vintage ships chart with a cork map of the world detailed with Emily’s original takes on sea monsters and mythical creatures. Guests were invited to pin a luggage tag into the map with a location and an explanation of why they should go to that place for their honeymoon. (The final location has yet to be decided (maybe Canada).

MEMORABLE MOMENTS | Speeches were kept short and sweet but will always be remembered by all. There were traditional Irish blessings read out by who was unfortunate enough to have the microphone land on their lap during Emily’s invention of the game “musical mic”.

Emily’s sister Hannah surprised the couple with an African drum group DrumRoots, which got the whole wedding party up on their feet and dancing. Their entertainment came to an end with Emily and Matt joining the drum group in playing one last song.

The bar that the couple had decided on hiring was run by Shack Revolution from Herefordshire who were happy enough to accept Matt and the groomsmen behind the bar for a dance before letting Matt serve the guests.

The band, Flynn and Tonics, were made up mostly of friends and colleagues of Matt and Emily that they had met during their time at LIPA (The Liverpool Institute for Performing Arts) where Matt and Emily had first met.

As favours for the wedding guests Matt’s Aunty Jo supplied a huge amount of small jars of honey produced by the bees she keeps at Pimhill Barn, which were complimented by honey dippers turned by Matt’s grandpa Graham.

The entire day was so full of happiness and silliness that there are so many memories, too many to recall in a few paragraphs.

ADVICE FOR OTHER COUPLES | Make the day enjoyable for all, Do what ever you want and makes you happy even if it’s against tradition. Emily and Matt approached their day as if it was one big party and everyone, Family, friends and even suppliers have all said how relaxed and fun and unique the day was.

You can’t control everything, what will be will be. There is no reason to stress only to enjoy yourself.

Hair and make up | Rebecca Anderton

Festoon hire | I A Sound and Lights

What a total blast everyone had. I love it.

The Studio Without Walls