WWW readers Craig and Emma tied the knot on the 17th June 2017. They wanted a relaxed and informal day, which still felt ‘weddingy’ and that was exactly what they got with the church ceremony and marvellous tipi reception. Our pair really went to town with the tipi and isn’t the result just fabulous?

The floral garlands really set the whole look off and metres and metres of hessian bunting supplied by Craig’s Mum finish it off beautifully. I can’t imagine that any of their guests were bored for a second, as there were plenty of lawn games including limbo to keep everyone entertained.

Emma didn’t find dress shopping an easy task but she eventually fell for this gorgeous Blue by Enzoani gown and looks stunning. Craig’s tweed suit from Vintage Suit Hire looks incredibly smart, even if it was a little warm for one of the hottest days of the year!

Neil Jackson has captured all the fun and frolics so beautifully. Thank you very much for sharing these wonderful images with us today Neil. 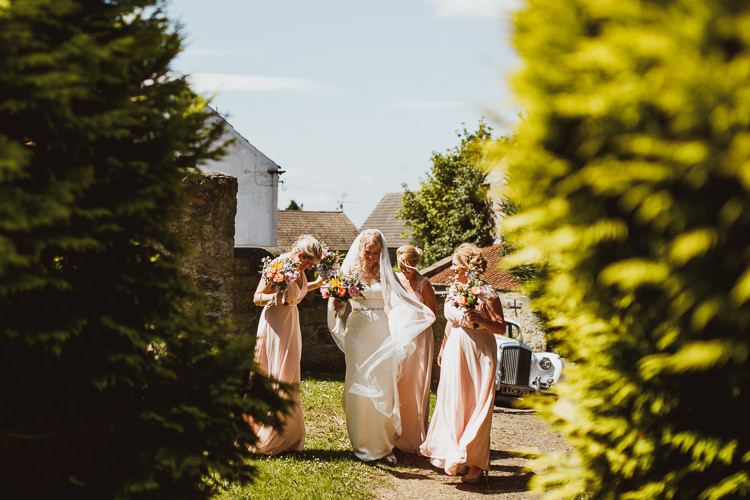 THE PROPOSAL | Craig got down on one knee in the grounds of Kilkenny Castle during a romantic long weekend away in Ireland which he had secretly extended by an extra day. He had been planning the proposal for months which involved liaising with the hotel staff to plan the big surprise, featuring a beautiful fairy lit summerhouse, prosecco and lilies (Emma’s favourites) and a mix CD (yes, he went retro) of Emma’s favourite soppy love songs. A very welcome but unexpected surprise, and of course Emma said yes!

THE VISION | We wanted a fun, informal and relaxed wedding where our friends and family could enjoy themselves, however we didn’t want to lose any of the traditional aspects which make a wedding what it is. In terms of the venue, we didn’t really know what we were looking for until we found it…

THE PLANNING PROCESS | After scouring the internet for a suitable venue near Emma’s home town in West Yorkshire, by pure chance we somehow became aware that a small venue in Scarborough (Craig’s home town) called The Barn would be hosting Tipi weddings from summer 2016. We liked the idea so arranged to meet with the owner, Clair, who had been hosting weddings there for some time but, due to demand, wanted a way of hosting for a larger capacity. All we had to go off from our first meeting with her were some artist’s impressions, yet we were blown away by her vision and enthusiasm and took a leap of faith by booking our wedding shortly afterwards!

From then on, we seemed to have a shared vision of how we wanted the day to go and slowly but surely started ticking things off our list of ‘To Dos’ until everything was in place.

THE VENUE | The ceremony was held at St John The Baptist Church, Cayton, Scarborough (where Craig once stormed out during his leading role as Joseph in the Christmas nativity). Our 12 month old cocker spaniel, Rosie, came to meet us after the ceremony as a surprise….fair to say Emma needed to touch up her mascara afterwards!

We arranged for two double decker buses to take our guests from the church to the reception via the sea front, which allowed for a quick group photo by the sea, with Scarborough Castle as the backdrop.

Our reception was held in a Tipi at The Barn in Scarborough, a fantastic venue in a rural setting close to the cliff tops. The food consisted of various canapes, followed by an amazing afternoon tea of sandwiches, cakes and scones plus a ploughman’s platter of pork pie, cheese and quiche for anybody that was still hungry!

All of the staff were absolutely fantastic and were on first name terms with some of our drunker guests by the end of the night!

Earrings- Emma’s “something old” from her Nana

FINDING THE DRESS | Emma had an image in her mind of the type of wedding dress that she wanted but, after trying on every dress ever invented, she still hadn’t found ‘the one’ until she tried on an Enzoani strapless satin gown with a sweetheart neckline and a corded lace bodice. Crystal buttons lined the back of the dress which was finished with a lace train.

We wanted the day to feel relaxed and relatively informal, however we still wanted a suit that would be in line with the formality of a church ceremony. Despite having looked at a number of High Street shops we decided that tweed would be a good compromise and a versatile option. When we found the Vintage Suit Hire Company online we knew that they were the ones. Although, if we had known that it would be 30 degrees on our wedding day we may have opted for something a little more airy!

THE READINGS & MUSIC | After having read far too many intense wedding readings and struggling to know where to go from there, Emma’s sister Jen found her the perfect reading, “Together”. However, after Emma shed a tear reading it for the first time, it transpired weeks later that Jen had actually written it herself. It was a perfect fit and was read beautifully by Jen on the day.

A ‘love poem between two lovers’ was nervelessly delivered by Craig’s dad, Keith, and one of Emma’s best friends, Damaris, did a perfect reading of I Love You by Johnny Cash.

Laura – one of Emma’s oldest and best friends

As most of the flowers were relatively bold colours to compliment the tipi, we chose ‘nude pink’ bridesmaids dresses with lace detailing on the shoulders to avoid any colour clashes.

THE FLOWERS | Our flowers were provided by Kirsty Berridge of Minniebees, an award winning florist based in Scarborough. We met with Kirsty several times and loved how passionate she was about her work, which resulted in some absolutely stunning flowers. We opted for a variety of seasonal flowers in a mixture of summer colours, accentuated by sunflowers. The tipi also featured a 3 metre rustic wooden beam hanging from the ceiling which Kirsty used to create an incredible central feature.

THE CAKE | The cake was baked and decorated by Emma’s auntie, Sue, based on a ‘vision’ (ahem…Pinterest) we had shown her which fitted our rustic / sunflower theme perfectly. Nobody would have guessed that the cake hadn’t been made by a professional – she did an amazing job and it looked and tasted far better than we could ever have imagined!

YOUR PHOTOGRAPHER | Neil Jackson. Neil managed to capture our wedding in exactly the way we were hoping for and we were over the moon when we received the photographs. We had a few traditional group photos (mainly to keep the older members of the family happy) but Neil’s style is laidback and unobtrusive which allows him to capture the magic of the day through natural shots which showed us and our guests having a whale of a time……

THE DETAILS & DÉCOR | Despite neither of us being particularly ‘arty’ we were very proud to have handmade the order of service, table plan, name settings, centre pieces and most of the decorations in our wedding workshop (spare bedroom), which just shows that anybody can do it! Craig’s mum, Sue, is a whizz on a sewing machine and did a fantastic job providing rustic hessian and lace bunting and a variety of wreaths.

Our amazing acoustic guitarist, Craig Bevan, welcomed our guests and played through most of the afternoon, including a couple of songs we had asked him to learn specially and a rendition of ‘My Girl’ on behalf of Emma’s brothers. We also provided a variety of lawn games and a “Where’s Rosie?” photo board, with pictures of our guests, to keep everybody busy.

Guests were also kept busy on the journey between the church and reception with a special wedding quiz with the winner, Craig’s Grandma (“fix!”), announced during the speeches.

THE HONEYMOON | Antigua & St Lucia – after spending weeks/months planning an adventure style honeymoon in South and Central America, we eventually settled on a complete change of pace and spent two weeks chilling out in the Caribbean. After all the stress of organising the wedding, we’re so glad we did and we had an amazing time!

MEMORABLE MOMENTS | The speeches….and being able to announce to all of our guests that we were expecting a baby, due on Boxing Day 2017, which had been a secret slowly eating us alive for almost three months!!

Other memorable moments, not including the searing 30 degree heat, were Emma trying (unsuccessfully) to befriend a very confused Basset Hound on our way back from taking some photos on the cliff top.

Also, two of our male guests doing an impromptu striptease and dancing topless on each other’s shoulders shortly after the first dance. The funny part is that they were complete strangers until their dance floor bromance!

ADVICE FOR OTHER COUPLES | It’s a huge cliché, but enjoy every moment because it really does go by at lightning speed. Despite how many people suggested it to us beforehand our only regret was that we didn’t spend enough time together to just take it all in.

Enjoy the planning process as best you can and try not to get too stressed out when things don’t work out as you expect, or you can’t agree on something – there will be plenty of compromises.

Also, Grooms, don’t forget when you’re suit shopping in January and feel like a thick tweed suit is a good idea that it may not be the same temperature on your wedding day!

Emma and Craig, what a fabulous, fun day you had. Thank you ever so much for sharing with us. Rachel x