I love that as an alternative to a marquee wedding, this lovely pair chose a venue with a room lined with fabric. It’s a win win, with the marquee look and yet the security of being indoors away from the elements.

Rita and Richie were married on the 3rd September 2016 at Horetown House in Ireland. The setting was truly magnificent, with it’s surrounding rolling countryside and the light and bright house perfect for their personal ceremony and following celebrations. The reception room looked so very pretty, with pale pink and green lanterns, soft festoon lighting and ornate chairs. Delicate blooms in jars decorated the tables alongside log slices, candles and elegant stationery. Wow.

Rita looked incredible in her lace sleeved gown and sweet hair vine, while Richie chose a dapper black suit and pink tie, which coordinated with the running theme. Gorgeous.

Jonathan Ryder, thanks so much for sharing these dreamy images with us. 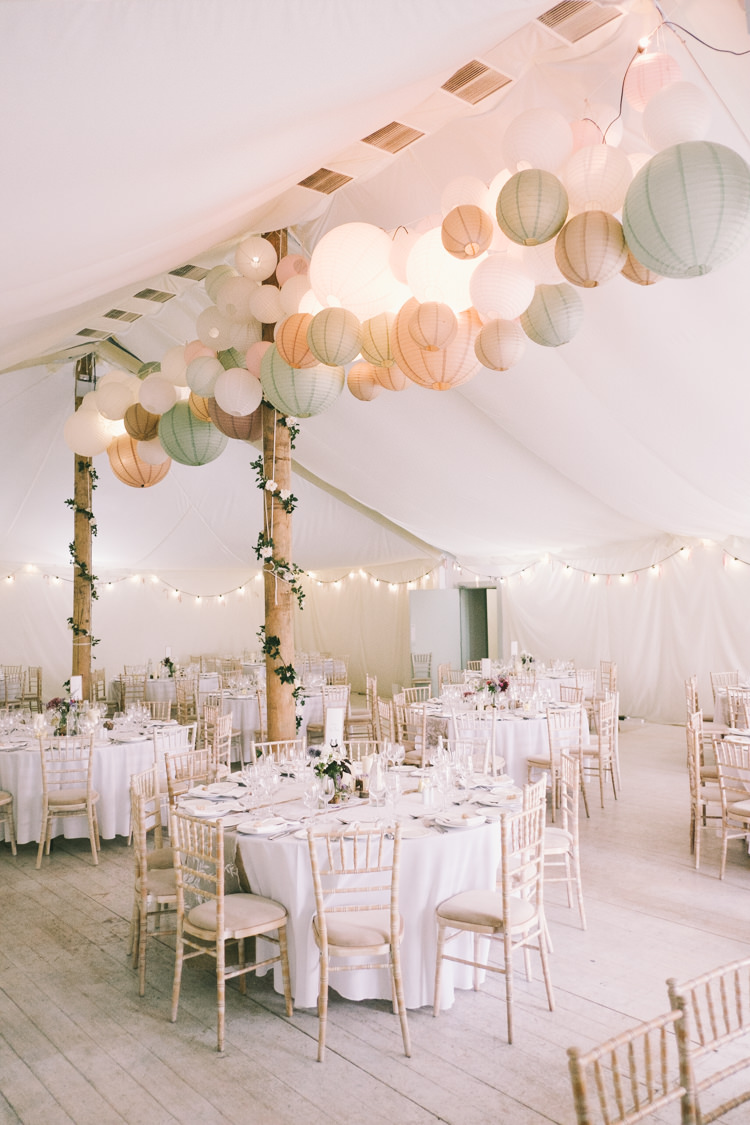 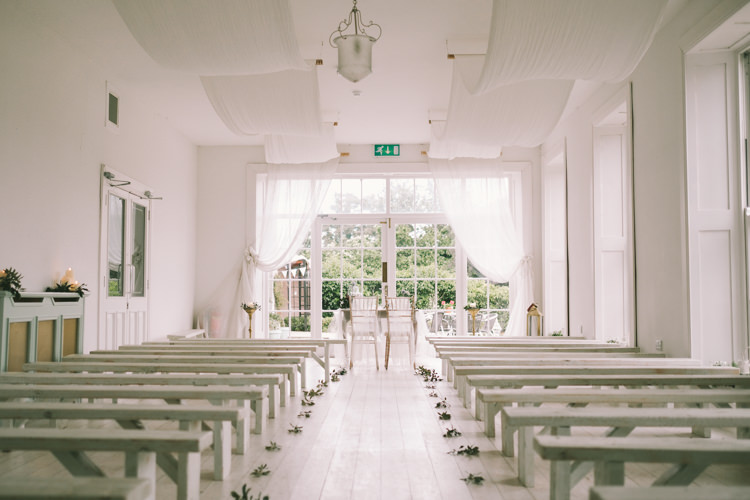 THE PROPOSAL | We were on a weeks holiday in Dunfanaghy, Co. Donegal. On the 5th anniversary of the first night we met, while taking a walk along Horn Head, Richie proposed. He had taken a look at some rings but decided a dummy ring would be the best option on the day. We went ring shopping together a couple of days later.

THE VISION | We really liked the idea of a country style marquee wedding but we soon realised putting this together would be a lot of hard work. Horetown House had the marquee look with the added comfort of it being in a building where we could host the ceremony and drinks reception. They also took all the hard work out of it.

THE PLANNING PROCESS | We started with a guest list and tried to work out how many of them would come. With that figure in mind we started looking for the right venue while keeping an eye out for a band, the dresses and a suit. Once the venue was booked we sent out a Save the Date by email and then it was just a case of ticking things off the list including designing and hand making our invitations.

THE VENUE | We fell in love with Horetown House as soon as we saw it. It’s a beautiful country house, which sleeps roughly 20 people. It has a fantastic ceremony room and it’s own bar in the basement where the party continued until the wee hours and the marquee style dining room was exactly what we were looking for. They were a fantastic help over the couple of days we stayed there. They couldn’t do enough for us and the whole experience was fantastic, in particular the meal.

THE DRESS & ACCESSORIES | Rita wanted a relaxed style for the dress and accessories but she did pick a dress fancier then she expected. She wore a hairpiece Richie bought for her from Virginia Geiger Jewels on Etsy, she had fallen in love with it earlier in the year and Richie bought her a surprise of earrings from Patrick Glynn Jewellers on Abbey Street. Her bracelet was one her very good friend gave her from China a few years previously, she never takes it off.

FINDING THE DRESS | Rita had originally wanted to get a dressy dress or get one made but Rita’s Mum booked an appointment in the bridal boutique which she thought was for the bridesmaids dresses, when she got there she found two dresses she fell in love with! Mothers do know best!! She booked an appointment for the following week so her sisters and Mother in Law (to be) could see and she picked the dress. She was the most relaxed bride looking for a dress and left it until three months before the wedding. The bridal store were very good and were able to put a rush order in.

GROOM’S ATTIRE | To go with the country house style Richie was looking out for a light material 3 piece tweed suit. September weather in Ireland can be very unpredictable to put it lightly so he didn’t want anything too heavy in case we got one of our Mediterranean like afternoons (less likely than the cold and rain… but you never know). He came across a standard navy material suit in a suit shop in Dublin, which also had a tweed like pattern. This way he got the best of both worlds. With this he wore tan shoes, a pale pink tie and hanky and bright pink socks. The Dads and best men wore the same using plain navy suits of their own.

THE CEREMONY, READINGS & MUSIC | We had actually got married in a local church with our close families the previous day so the ceremony itself was just to recognise the event in front of our friends and extended family. This gave us the freedom to do as we wished. We asked Rita’s brother Donal to host the ceremony and he couldn’t have done a better job. It was perfect! It started with our friend JP playing the piano while people took their seats. There were a selection of readings from our friends, some of which were very funny and a piece of music from the band (The Trips). We then left some room for Donal to talk about us in the middle. Having someone that knows us so well do this really gave it a personal touch.

THE FLOWERS | The bouquets and buttonholes were bought locally from Slaney Flowers of Wexford. Horetown House supplied all the flowers that were found around the house including the ceremony room and dining room tables, which were all fresh from their gardens.

THE CAKE | We had a “cheese” cake or rather a stack of a few wheels of cheese, which was supplied by a couple friends of ours as a wedding gift and was put together and displayed by the staff of the house. We were delighted with the end result and it was hugely popular.

YOUR PHOTOGRAPHER | We found Jonathan Ryder though a friend of ours who had used him for their wedding. We can’t speak highly enough of him. We christened him “The Photography Ninja” as we barely noticed he was there and we were so happy with the photos he produced.

YOUR BAND | Our band, The Trips, were amazing! They played a couple of songs during the ceremony, throughout the drinks reception, the after meal dancing and a DJ set at the end. They were a joy to work with from start to finish and the guests particularly enjoyed the lead singer coming down on to the dance floor and getting them to sing along.

THE DETAILS & DÉCOR | Once again the house took care of most of this for us. They had the house looking beautiful and the only decision we had to make was which of the 3 table setting options we wanted. We selected one, which included some brown sack details (much nicer than it sounds), which went really well with the style of the invitations we had done that used white paper on a brown recycled card. Normally the house would supply the table plans and menus but to keep a consistent theme we put these together using the same white paper and recycled card.

THE HONEYMOON | We were lucky enough to travel to the west coast of America and Canada a couple of days after the wedding itself for about two and a half weeks. First was Las Vegas followed by San Francisco, San Diego and finally Vancouver to visit friends of ours (one of Richie’s best men) who are living there and had made the long trip over for the wedding.

MEMORABLE MOMENTS | The best moments of the day for us were the ceremony itself, having our friends doing readings and Rita’s brother up there doing such a great job was great fun, the meal and speeches were nerve-racking but very enjoyable and all the live music was brilliant.

ADVICE FOR OTHER COUPLES | Something we found very useful was sending out a survey monkey survey with the Save the Date. It doesn’t really help with the final numbers but it does let you know who definitely CAN’T make it.

Grooms suit and bestmen’s shirts and ties | The Formal Suite

The Band | The Trips