It might be summertime but it’s time to wrap up and step into WWW readers Geraldine and Conleth’s beautiful winter woodland wedding. This gorgeous couple tied the knot in magical style on 17th November 2017 at Orange Tree House in Northern Ireland.

Their engagement began at Disneyland Paris, so it was only natural that Disney formed the basis of their wedding. From the table names and music choices to the cake topper, all you Disney fans will absolutely love all the pretty touches. The twinkling gold trees at the top of the aisle are just other-worldly and I can’t get enough of the fabulously decorated fireplace. They also included their four legged friends in fantastic style!

Geraldine chose a sparkling, celestial Jenny Packham gown and her bridesmaids complimented her perfectly in their dusky purple. The ethereal feel continues with tumbling foliage laden bouquets and greenery garlands adorning the venue. Make sure you drink it all in WWWers!

You Them Us have captured every last magical detail of Geraldine and Conleth’s wedding and we’re ever so grateful for these wonderful images. 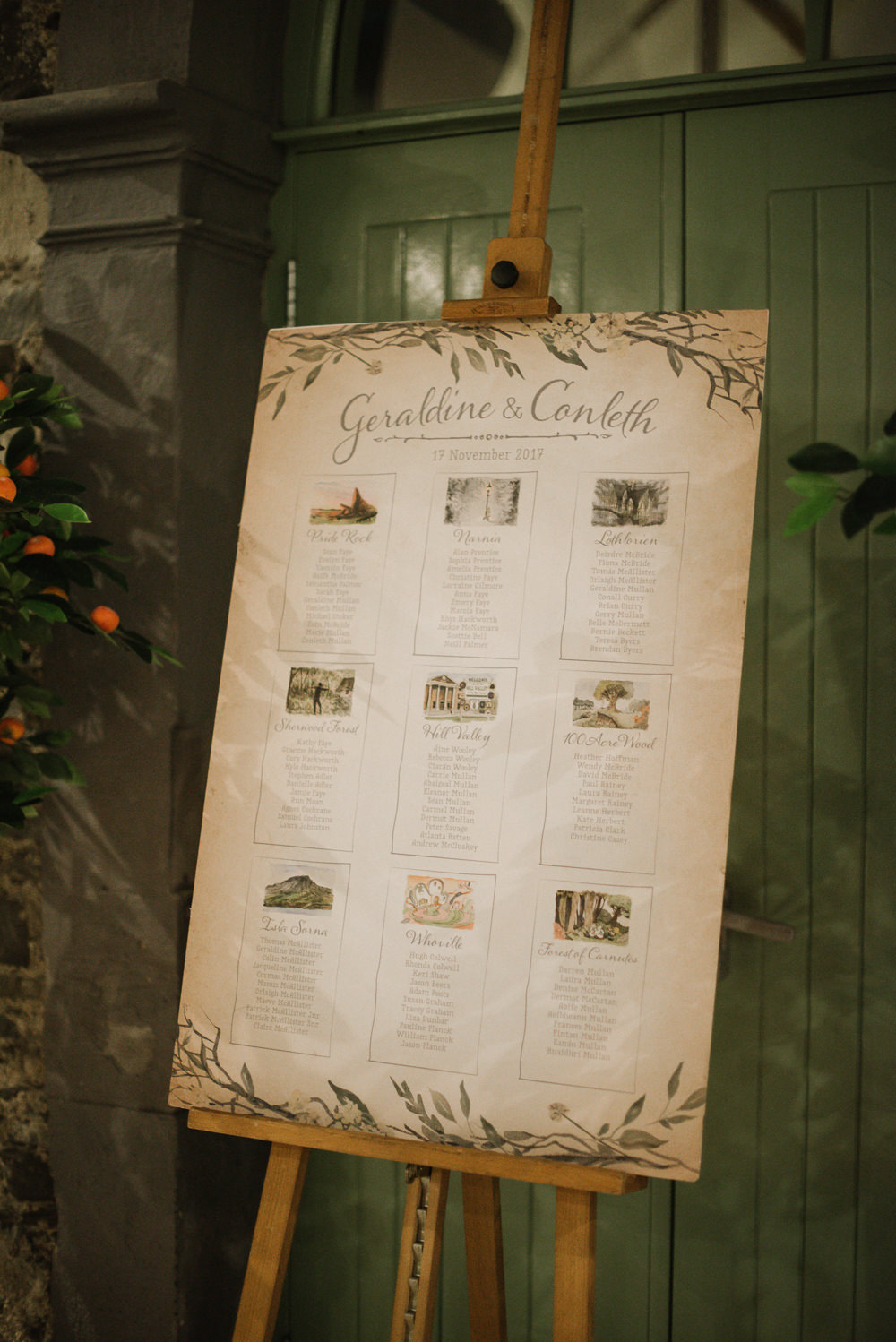 Disneyland Paris 23/11/14. After a magical evening watching the fireworks at the Disney castle he proposed in our hotel room which he had specially decorated for Christmas.

A magical winter woodland sprinkled with hints of both are personalities and quirks.

It was important that the wedding day reflected us and it would be remembered as our day and not just another wedding. From the decorations to the music and most importantly the dress, it all had to be personal and of course include are littlest family members the flower dogs Remy (small white dog) and Willow (black dog).

The dress was Lucky from Jenny Packham 2017 collection, the head piece was Jenny Packham Wonderland and the shoes were Jimmy Choo. My mother presented me with a Swarovski Crystal bracelet that was themed around stars and had a blue stone for my something blue of the day. The dress and head piece were purchased from Castle Couture, Ballymena.

When I saw Jenny Packham’s bridal collections I knew that my dress was going to be a Jenny Packham dress. I first tried on some of Jenny’s 2016 collection but I just had a gut feeling that I should wait until her 2017 collection was launched.   I was right to do so but the only problem was is that I fell in love with 2 of them and both were very different. With the help of my family I chose lucky and know I made the right decision again as I couldn’t imagine myself in another dress now on my wedding day.

The groom wore a dark grey Paul Smith suit and tie. The tie added a bit of the groom’s personality and adorned something he loves as it had a T-Rex on it. The cuffs were a Christmas gift from his now mother in-law were acorns a symbol of his favourite film trilogy Lord of the Rings.

The ceremony music was performed by the very talented violinist Éimear Bradley. The bride walked up the isle to a Violin solo of ‘can you feel the love tonight’ from the her favourite movie the Lion King. The readings were The Ent and the Ent wife and Sonnet 116 by Shakespeare. On the way down the aisle we let a bit of both of the personalities of the bride and groom show with another violin solo of The Jungle Book’s The Bear Necessities.

Sarah Faye (sister and MOH), Samantha Palmer (cousin), Yasmin Faye (cousin) and Aoife McBride (cousin of groom). As my dress was a champagne/barley colour I had to be careful with the colour of my bridesmaid dresses. I chose purple as it is was a warm colour to go with my theme. The dresses were Hayley Paige and were also from Castle Couture.

The flowers were created by the extremely talented and lovely Marie Cafolla Flowers. Marie took our ideas, embraced them and brought them to life in a way that blew us away.

Relax Cakes, Newtownards. The cake topper was Disney Robin Hood and Maid Marion by Precious Moments and the flower decorations were by Maria Cafolla.

Our photographer was ‘You Them Us’. We discovered them while attending the Quirky wedding fair in Belfast and instantly fell in love with the style of photography and their ability to capture even the smallest moments. They were amazing on the day and made everyone including the more camera shy family members comfortable and relaxed. I am still stunned at how beautiful their photos were and how they were able to capture all the little magical details and emotions throughout the entire day. I will treasure every last picture forever.

The wedding décor started with our wedding invites that were designed by Ben from Paperbark Stationary. We wanted our guests to get a small glimpse of the wedding theme. As well as our woodland theme we chose our venue decorations around the wedding dress. We went to local garden centres and shopped online for decorations. We wanted our venue to feel warm and welcoming using soft warm lighting from candles and copper string lighting. To bring some woodland in we bought 2 glittery gold trees for the start of the aisle and a large snow frosted tree for the top of the aisle and added decorative clip on birds to bring in some woodland creatures. The candle holders were gold and some had stars and other decoration were twig/wood effect.

One of our favourite decorations was the signpost with the table names on it. The actual post was made by a local joiner Bernard Byers from large tree branches and we purchased the signs from a shop on Etsy called Signsatsimplywood.

Paris is a very special place for us so naturally it was going to be our honeymoon destination and we tried to align it so that we were there on our engagement anniversary. We spent the first two nights in Trianon Palace Versailles, A Waldorf Astoria Hotel. Which is in the actual grounds of the Versaille Palace. We then spent a night in Hotel Splendid Etoile in an amazing room overlooking the Arc de Triomphe. And finally we finished off with four nights in the magical Disneyland hotel.

Hearing ‘Can you feel the love tonight’ on the violin just as I was about to walk up the aisle.

Hearing ‘ The Bear Necessities’ as we were announced Mr and Mrs Mullan.

Seeing Conleth (husband) and Willow (dog) at the top of the aisle.

My brother’s and Conleth’s speeches.

The general atmosphere of the entire day made everything memorable and completely magical.

Make sure you have an awesome and super organised maid of honour/sister and an amazing mother who knows what you like better than you do. Make sure to keep your personality in even the smallest details because it’s so easy to lose that throughout all the organising. Always remember it’s your day and not the guests’, choose the things that you like and love. And last but not least.. Include your furry four legged family members because they make the day even more special.

Photography
You Them Us

What a simply magical day you both had! Geraldine and Conleth, thank you for sharing all the beautiful details with us. Rachel x