Today is all about pretty gardens and a couple that loves the great outdoors. Their story begins with a secret garden, where the proposal also took place and a very special piece of music, which held must sentiment for them both. There is also a very special baby announcement, which you’ll have to read all about in the report, it’s just too lovely.

Aliye and Richard were married on Sunday 10th July 2016 at The Orangery in Kent. The gardens were perfect for the natural and outdoor wedding ceremony of their dreams, held in a gazebo adorned with peach and white blooms. Peach had a running theme in their day, with gorgeous florals used in the hue everywhere, think flowers in tea cups and a striking cake table display.

Aliye looked utterly gorgeous in her chosen gown by Kenneth Winston Private Label by G, which she accessorised a with lace edged veil and red lips. The bridesmaids wore darling long pale pink dresses, which matched the groomsmens ties perfectly. Richard opted for a navy suit with a grey tweed waistcoat for a timeless style. You’re going to fall head over heels for this lovely day.

Julia and You, thank you so much for providing these exquisite images. 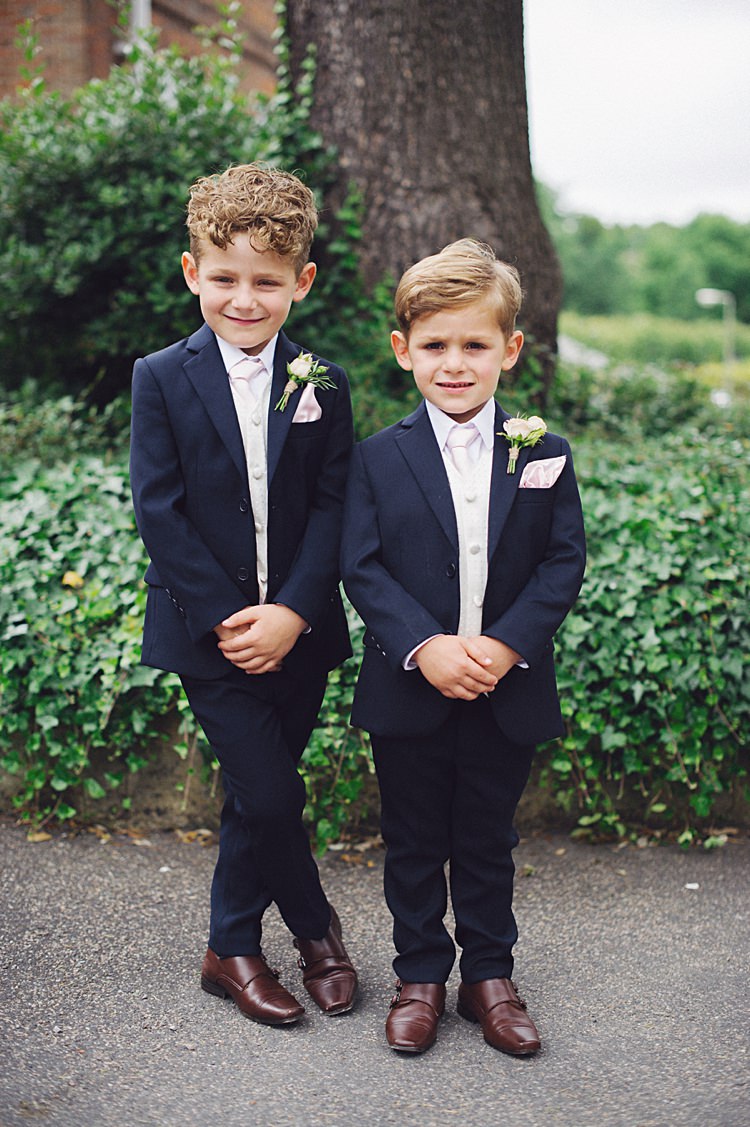 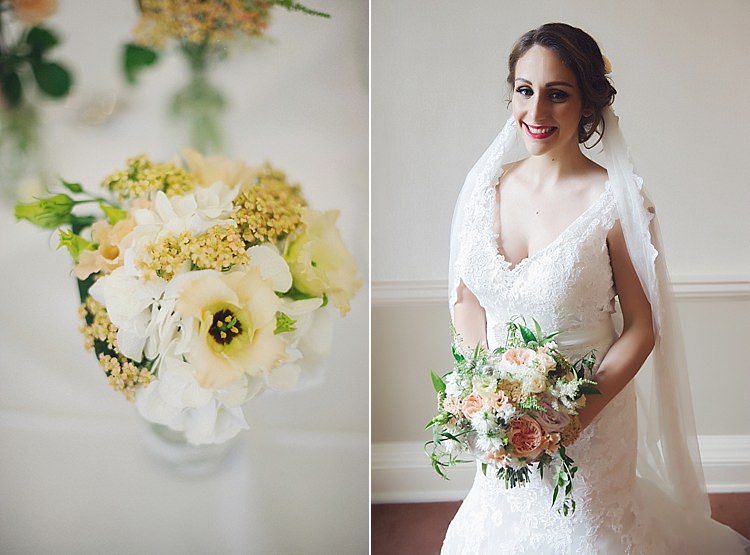 THE PROPOSAL | 30th November 2014 – Shorne Country Park, Kent. Richard took me to our favourite country park under the pretence of meeting family for a winter walk (in the freezing cold so I had on my gingerbread jumper and wellies!) It was becoming very dark and I started to question why we were even there… when all of a sudden Rich ran off ahead of me shouting “Oh, I wonder what is over here?” I was laughing at him and followed him as he disappeared behind a hedge. As I came close to the opening in the hedge I heard music playing, which was actually the intro to my all-time favourite piece of music called Due Tramonti by Ludovico Einaudi. I followed a path and all of a sudden saw an archway in a secret garden covered in fairy lights. A violinist stepped out underneath the archway playing the piece and I immediately started to cry! Richard then walked under the archway and got down on one knee, asking me to be his wife. He explained to me later that the first time we ever visited this park as a couple over 5 years ago I had seen this secret garden and said “this would be a great place if someone wanted to get engaged!” He also said that the first time he heard this piece of music was the first time he had an image of us growing old together, which is why this piece of music was so important to us for the wedding. It was played for my entrance during the ceremony by the same violinist AND spookily came on the radio at the bridal store when I tried on the dress that became the one!

THE VISION | We loved the look and feel of Italian and vintage styled weddings, with little quirks. We wanted to find a venue with a beautiful outdoors space for the ceremony and for photos as we are both outdoorsy and love nature and going for walks with our Bichon Frise Mia. I wanted quite neutral and peachy tones throughout the wedding and most importantly we wanted everyone to feel welcome and to enjoy the day we had looked forward to for so long! I had family coming over from North Cyprus, which is where my dad is from so it was important to combine some Turkish Cypriot elements in to the wedding too, which we did by having a meze starter and money pinning in the evening.

THE PLANNING PROCESS | I could not have survived without my trusty wedding planner file that Rich bought for me just after we first got engaged! We went to lots of cake tastings and food tastings as we are massive foodies and this was one of the most important aspects for us! Azra Catering were fantastic in both the lead up and on the day – everybody couldn’t speak highly enough of the meze starter and lamb shank.

THE VENUE | The Orangery, Maidstone. We had always agreed that we wanted a venue that allowed for the ceremony outside as we come from families of lots of different faiths and beliefs. Having the ceremony outside was so important to us, and was almost not able to happen due to rain on the morning of the wedding! But the rain cleared up and the sun came out for the rest of the day – except for a light shower during the vows which made for a good umbrella photo!

THE DRESS & ACCESSORIES | Dress by Kenneth Winston Private Label by G from Isabella Grace bridal in Mt Ephraim in Tunbridge Wells. Veil handmade by bride’s mother. Bridal make up by bride’s best friend and bridesmaid Stacey Triplow (Beauty by Stacey) (who came all the way from San Diego for the wedding with her husband Matt who was also best man!) Shoes by Next.

FINDING THE DRESS | I had already visited quite a few dress stores and thought I had found dresses I loved in almost every single one (I think I just loved trying on wedding dresses!). My mum, sister and I found a lovely boutique in Tunbridge Wells called Isabella Grace with a great variety of dresses so we headed there for a private appointment. I tried on so many dresses, all of them beautiful and my mum and I always thought I would end up with the ‘princess’ dress. However, the wonderful lady helping me pulled a lace, fitted Kenneth Winston gown from the rails for me to try and as soon as I put it on I loved it. I stepped out in to the front of the store to look at it in a full length mirror with a veil and as I stepped in front of a mirror the piece of music Rich had proposed to me with (Due Tramonti by Ludovico Einaudi) started to play. I started to cry and soon enough all of us were in tears! It was a huge spooky coincidence but also a sign that this was my dress!

THE READINGS & MUSIC | Ceremony music played by violinist Andrew Hubbard (same musician who played for our engagement) – Due Tramonti by Ludovico Einaudi. The violinist also played a few traditional Cypriot songs during the day and during the money pinning in the evening, which made my grandad over from Cyprus very happy!

Reading by bride’s sister/maid of honour – poem by E.E. Cummings – I carry your heart with me.

BEAUTIFUL BRIDESMAIDS | I had 6 bridesmaids and 1 flower girl (our niece). My sister Sheniz was my maid of honour. Bridesmaids wore peach maxi dresses from ASOS and flower girl wore dress from Next.

THE FLOWERS | Becky Franklin – Floral Explosion. Romantic and neutral palette of colours, candelabra centrepieces, lots of flowers everywhere including to decorate the gazebo.

THE CAKE | Nicola Peters – Such Fun Cakes – 4 tier cake with each tier a different flavour and with the most amazing sugar flowers we have ever seen.

YOUR PHOTOGRAPHER | Julia West – Julia and You Photography – amazing photographer! Also our videographer was NDR films.

THE DETAILS & DÉCOR | Becky Franklin – Floral Explosion. Bespoke LOVE sign made from artificial flowers, a vintage dresser table to display the cake on. Also had vintage books and tea cup centrepieces and on the ceremony table. One of my bridesmaids and best friends Kayleigh Mcdaid (Handmade Heart Crafts) also handmade table numbers and decorated the sweet table.

Instead of traditional favours, we decided that we would instead donate the money to Cancer Research in memory of the family we have lost – including Richard’s dad. We had a packet of forget me not seeds at every seat for guests to take home and plant to serve as a reminder of our wedding and of our loved ones that have had to battle cancer.

THE HONEYMOON | We haven’t yet had our honeymoon as we bought a house and found out we were expecting a baby a few weeks before the wedding!

MEMORABLE MOMENTS | Our secret announcement photo – we asked all family and guests to stand behind us for a group shot as we held a sign that they thought said “Just Married”. What the sign actually said was “Shh…we are having a baby!” We released the photo on social media and to family a few weeks after the wedding when we had our first scan and it was the best way to announce our little one (which we have found out is a boy due in January!) Nobody suspected a thing and it meant we could forever have this announcement photo with all of our family and friends unknowingly involved!

ADVICE FOR OTHER COUPLES | Don’t let the stress and pressures of planning a wedding get in the way of the most important thing – how much you love each other! It is impossible to make everyone happy, so just make it a day that you will both remember forever. Take some time during the day to be just you two after the ceremony and take in the fact that you are now married – it goes by so fast!

Photography | Julia and You

Bridal make up | Beauty by Stacey