Have you ever considered hosting a marquee wedding at home? Well that’s exactly what Sara and Gareth did on the 21st of September 2019 following a church ceremony and it was stunning. Their vision was for a rustic country style wedding celebration and their day being personal to them was of uttermost importance. I love how they planned their day within 6 months and created such a magical atmosphere at their house too. The marquee looked so pretty with natural materials used including wooden touches, personalised bunting, a lot of cake and the sweetest Emma Bridgewater mugs and vases for flowers. Genius!

Sara looked amazing in her lace gown with pretty sash and flowers in her hair, Gareth and the groomsmen wore green tweed jackets and waistcoats teamed with chinos and the bridesmaids were in sage green frocks. Didn’t they look wonderful? Also look out for the really cute bridesmaid wrist bands, such a fab idea!

These utterly gorgeous images are by The Chamberlins, thanks so much for sharing them with us guys.

This was the most beautiful day and so well thought out – April 7th 2019. We had been talking about getting married and I had been looking at rings on Pinterest. I was keen that Gareth chose the ring himself but wanted him to know vaguely what I would like. I also knew he had spoken to my dad about asking me to marry him, but I felt impatient and didn’t think it would necessarily happen any time soon.

I woke up to Gareth moving around in the kitchen and I wondered what he was up to. Already a little bit suspicious, I got up and peaked downstairs but couldn’t see anything so thought I was getting myself all excited for no reason. I decided to get dressed and put some make up on – just in case! – as I came down, I could immediately see that Gareth was emotional. He suggested we have some breakfast in the garden, his lip wobbling, and I knew something was definitely happening! He walked me out into the garden – it was a slightly misty morning – and he had set up the most beautiful scene on the patio. A table for two with a massive bunch of roses in my favourite six-pint Emma Bridgewater jug, two roses on the back of the chair, a hot tub going in the background, which little did I know, he bought the day before and filled up without me knowing. He led me down the garden, we were both emotional and I noticed a blanket folded up. He got down on one knee and asked the question! I of course, said yes!

The ring was the most beautiful ring I had seen and amazingly, it was very similar to my favourite one on Pinterest. The rest of the day was pancakes for breakfast which he had made, a walk in the forest with the dogs, phoning various people and then we travelled to the beautiful village of Lavenham. We had some French food in the lovely restaurant called The Great House; we were on cloud nine the whole day.

Our vision was for the day to be rustic, woodland / country themed, and of course, personal. As this was both our second marriages – both of our previous marriages being deeply upsetting and traumatic – we wanted something special but didn’t feel we wanted anything over the top. It felt right to have the wedding reception at our house (set half a mile into the woods!) it has just the perfect feel for a country rustic wedding. Also, we fell in love walking through the forest, having G&Ts in the garden and playing with the dogs so lots of our memories together are in the garden. Plus, having got engaged there, it definitely felt right!

This was a fairly rushed planning process due to getting engaged in April and deciding we wanted to get married in the September – 6 months to plan and save! Our heart was in wanting something that was special with meaning for us and mostly involved just family. As the venue was our house our aim was to get the garden looking as beautiful as possible and this is where a lot of our time and energy was spent early on. We had a few disasters such as my car breaking down, my car being broken into and handbag taken (with wedding planner in!) all in the lead up to the wedding which no doubt, did add to the stress and financial stress of being able to pull off the day.

Our local beautiful country church, East Harling, was where we held our ceremony and the main venue was our country home. We hired a marquee and did all the decor ourselves.

Page Boy: Tweed waistcoat with white shirt and navy trousers. He looked SO cute walking down the aisle – yes, walking at the grand age of just over 1!

The Bridesmaids: I had wanted sage green dresses to go with the country, woodland theme plus I really wanted the men in green tweed so knew I had to not have anything that clashed too much. I was delighted to find – from Oasis – a sage green dress with lace detail and buttons on the back. The girls chose their own shoes and they opted for wedges in a pink/nude style. I bought them a navy pashmina for the day, and they brought their own cardigans. Accessories they chose themselves. Hair we decided we wanted an up do to show off the dress but not too similar to how I wanted my hair. I wanted a succulent in each of their hair with some foliage but was open to suggestions. How it turned out on the day was just stunning – soft ruscus either side of a succulent.

Flower girl: This flower girl dress was made by my amazing sister who is so very talented. She runs an aside business to her midwifery (yes, she is multitalented!) called Bespoke Bunting and Crafts. We chose the fabric ourselves to match in with the bridesmaids; a sage green dress with cream tie.

We would have loved a gospel choir but we ended up having a fantastic gospel singer and piano player. We were delighted with it all and it really made the wedding ceremony special.

‘Be Still for the Presence of the Lord’

‘You are Good’ – We actually had Gareth’s sister’s boyfriend, Harry Greene, – an extremely talented guitar player – join in on this one. This was an upbeat, dancing song after we were announced husband and wife!

‘Footprints’ read by Kat (My best friend and bridesmaid)

‘Wedding’ by Alice Oswald read by Georgie (My mum)

Band in the evening: The Ashton Jones Project. My Dress: This was a Maggie Sottero dress and it was actually my sister’s wedding dress which she amazingly said I could have and do whatever I wanted to with it. This was so incredibly special and although there were some very worrying moments about whether it would suit me, I couldn’t have wished for a more perfect dress. The amazing Bridal Pixie was the powerhouse behind the beautiful adjustments and designs. She was brilliant at keeping me calm and being able to put into action my vision for the dress. She has just won The East of England designer/dressmaker of the year 2020 and she won in 2019 too – I can totally tell why!

Groom: We hired a tweed jacket and waistcoat from Moss Bros and found some cream chinos, a white cufflink shirt matched with shotgun cartridge cufflinks. These were created by 12 Bore Kickback Creations. We had ties from Debenhams with brass personalised tie clips.

Hair: Discover Hair – We went to a local hairdresser in Thetford. They were great and allowed my wedding hair vision to become reality by including fresh flowers into the look.

MUA: Beauty by Amineh, who is my wonderful sister-in-law.

The beautiful flowers were chosen by us at the London Market on the Thursday (3am start!) before the wedding. I had a wonderful family friend who also runs her own events company – Pendleton Events – put the flowers together into arrangements, buttonholes and the beautiful bouquet.

My vision for the flowers was country and rustic but I had my heart set on Protea flowers – any I could get my hands on from the market! They are so beautiful, unusual and most importantly point to where I was born – South Africa. You cannot imagine the squeals of delight when I found Queen and King proteas as well as the blushing bride proteas.

Bunting – My sister’s handiwork over at Bespoke Bunting and Crafts.

Oak boxes – made by Gareth and engraved by my sister.

Candle sticks and heart vase – made from my horses’ shoes by Anvil Cottage Crafts.

To fit the country theme, we had oak leaves running through the day from Emma Bridgewater mugs with oak leaves on to a wax seal on the order of service and invites. 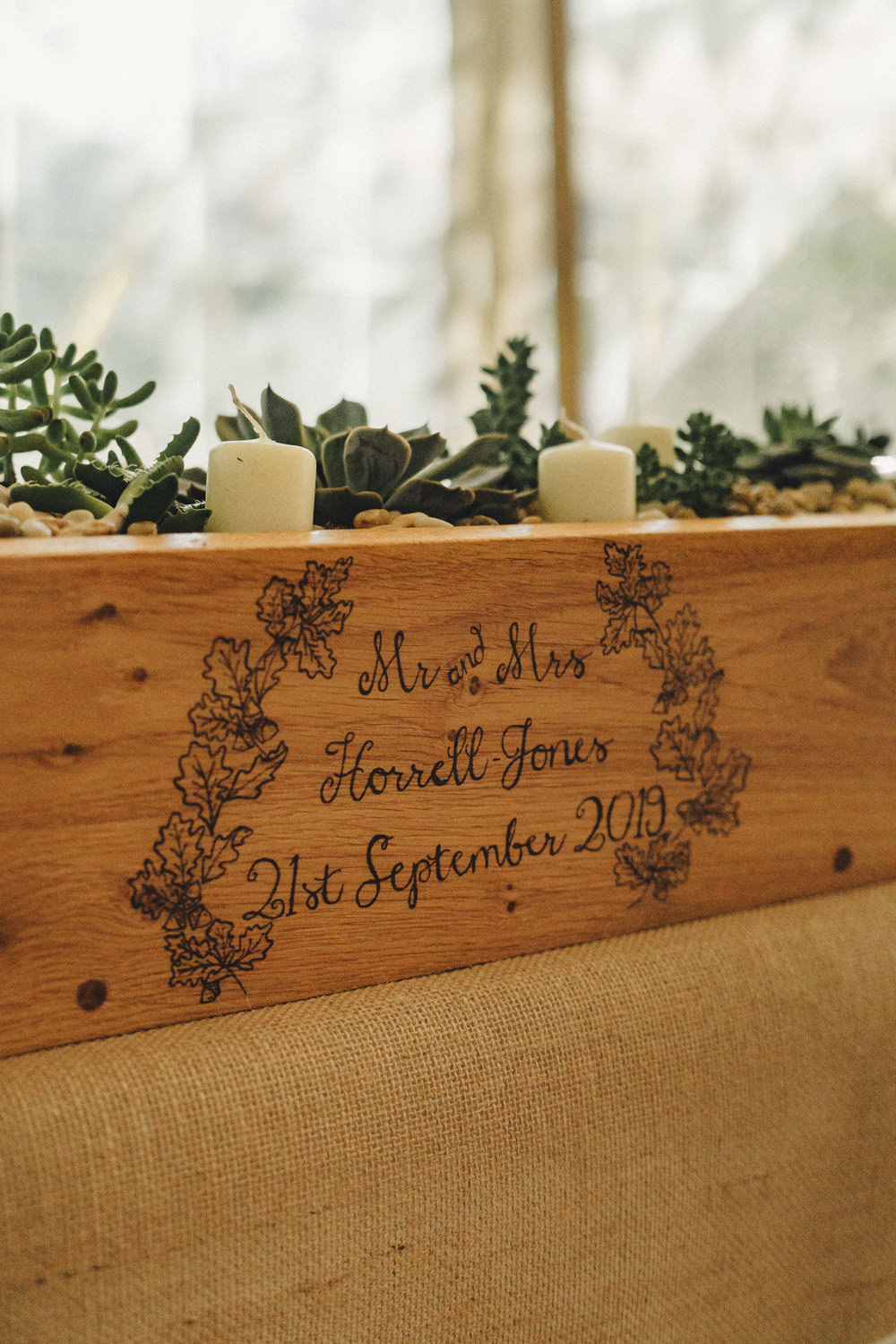 The stunning four tier cake was made by a local up and coming baker – Puddingpoke Puds and it was truly delicious. I had the vision of a 4 tier cake with real cascading flowers and succulents and this was achieved. Two tiers were lemon and 2 tiers were Victoria Sponge.

Georgia also baked 160 Welsh cakes! This was to satisfy the love we have for them and in honour of Gareth’s Welsh side of the family. 80 shortbread hearts which were given out after the ceremony and 125 cupcakes: Double choc, salted caramel cookie and cream, raspberry and white choc and mint choc. It is safe to say we did over cater and had lots to give away and take on honeymoon!

The stand the cake stood on was made out of an oak tree which Gareth crafted, cut a heart into and made handles for. So special.

The Chamberlins – These guys were absolute perfection. We were very keen to have photographers that just blended in with the day and didn’t take over, we found this in Will and Celle to another level as they felt like guests and I found myself looking for Celle during the day and knowing she would have things under control. I went to college with Will and knew that he was a talented photographer and genuinely nice guy. I knew they were the photographers for us!

To fit with our simplistic country rustic wedding, we went to the Lake District for a week where we could take all three dogs and enjoy the walks in the rain and food by the fire. To be honest, we were so tired after all the lead up and preparations for the day we just enjoyed sleeping and watching Game of Thrones in amongst our walks.

All the memories of setting up the marquee and taking it down, watching our vision become a reality and working as a team to change ideas that hadn’t quite worked.

Seeing my niece and nephew walk down the aisle was really heartwarming and special.

Best man’s speech. This was hilarious as he made some funny references to the fact that Gareth and I met on Muddy Matches(!), but thankfully, it was all done in a tasteful way!

Enjoy the day as it goes way too fast! Also, we were really keen to not have lots of time spent on family photos which then detracts from enjoying the day. I composed a list of all the people required in photos in the order they would be taken and emailed it around to all those involved. This meant on the day our photos went really easily as everyone knew what they were doing!

Make Up
Beauty by Amineh

Oh so pretty, I do love a rustic wedding day.

Sara and Gareth, thank you ever so much for sharing with us your very special wedding story xo Lou