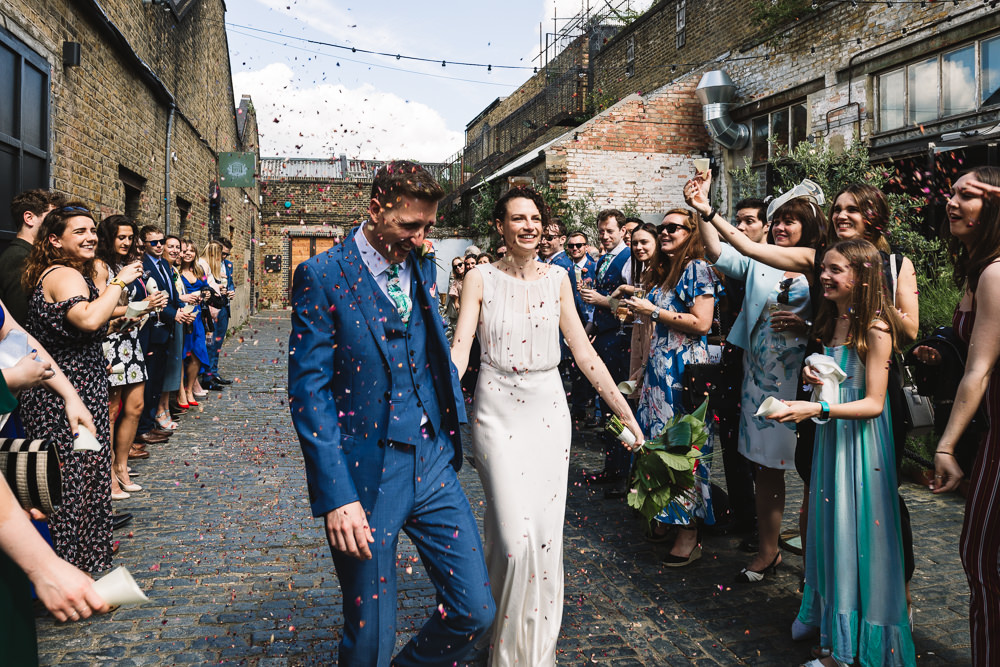 WWW readers Amy and Matt tied the knot at Clapton Country Club in London on the 1st June 2018. After finding their venue, they had just four months to plan and boy did they pull it off! This couple really were ever so laid back about the finer details and everything just came together wonderfully.

I’m loving the tropical florals, I think they really set off the colourful and eclectic décor. Their day looks like an absolute riot too, you just need to see some of the images from later in the evening to see that! Speaking of images, the marvellous photography at this wedding is all down to Kate Jackson Photography, thank you so much for sharing Kate.

Amy and Matt decided to do a first look and travel to the ceremony together, which is just lovely. From that moment on, it seems like they were surrounded by all their favourite people and lots of fun and laughter. Sounds perfect to me!

We were away in Lisbon, we had just exchanged on our first house purchase and due to complete the next weekend. It was a busy stressful time!

Matt had planned the place he was going to pop the question, the western most point of Europe, which in photos looked rugged, dramatic and romantic. When we actually got there though it was FULL of tourists, not intimate at all. So Matt had to change his plan, he was so annoyed when we left and I couldn’t work out why he was so annoyed by it!

The next day we had got tired of the city so spend the day walking around a park in the sunshine. We came across a botanical garden and went in to stroll among the plants. We were basically alone, and found a bench to sit on. I was reading my book – he was next to me reading his phone, I was so annoyed. I didn’t know why he was reading work emails on holiday. Turns out he’s made some notes of things he wanted to say when he popped the question. When it finally happened I was caught completely off guard. I didn’t really understand what was going on at first but once I did of course I was over the moon.

We just wanted a relaxed, colourful wedding where people could genuinely have fun with us!

We got engaged in August, but didn’t find the venue until February. They had one spot open for summer otherwise we’d have to wait for another year so after some persuading, Matt agreed to a quick turnaround of less than 4 months. It was plenty of time!

We wanted a London wedding because it was easiest for everyone coming, and that’s where our relationship started.

I really wanted a beautiful but relaxed venue, Clapton Country Club was perfect. It didn’t feel too weddingy, and the food and wine was amazing. We felt like people who ran it had the same values as us.

My dress was from John Lewis. I went to a bridal shop and tried on proper wedding dresses and felt so uncomfortable – I felt like I was in fancy dress. When I tried on the Ghost dress i eventually wore I felt really special but comfortable and just like myself but on a really really good day!

Matt hired his suit and went for a summery blue colour with a tropical tie.

We never really had a colour scheme in mind, one just sort of appeared naturally!

The groomsmen wore the same as Matt.

The dresses are no longer available.

Our walk in song was Emmylou by First Aid Kit (which is actually about people who love each other but can’t be together) we just love that song and band.

And to leave we had Folding Chair by Regina Spektor.

We weren’t planning on a first dance (Matt had been scarred by seeing a super awkward one at a previous wedding) but then after a lot of wine and after a lot of dancing had already happened our friends were on stage singing Robbie Williams Angels and a circle formed on the dance floor so I dragged Matt in for a dance. He was reluctant at first but then embraced it and it was really fun. It was a brilliant moment, but in a sober moment Robbie Williams wouldn’t have been my first choice…!

I loved my florist – The Botanical Shed. I had no idea what I wanted so I just sent Louise a picture of all the disparate things we had – the grooms men’s outfits, bridesmaids, my dress and shoes. At that point nothing really went together so I said to Louise I was hoping the flowers would do the hard work for us and she designed the most stunning bright pink and dark green tropical flowers I honestly could not have imagined better. I got lots of comments on the day about how unusual they were. 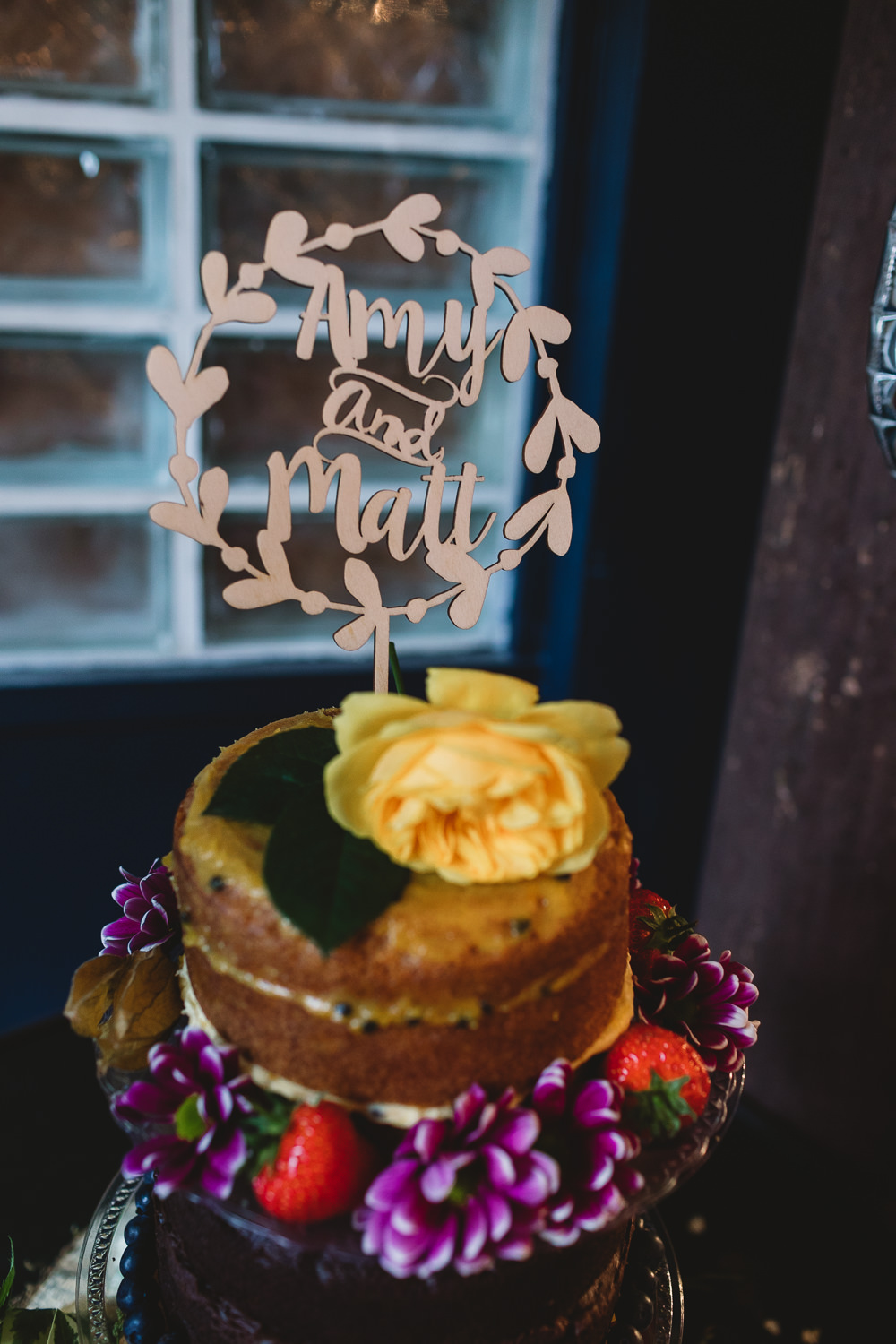 Matt’s Aunty! A DIY naked cake with some beautiful flowers arranged around it.

I found Kate because I was looking for people who had photographed at Clapton Country Club before. I was really taken by her photography because it wasn’t staged, seemed to capture genuine joy, and you got pictures of so many smiling faces than in any other weddings I had seen.

I came across one of her wedding highlight videos and loved it. I felt like loads of other wedding videos I’d seen online were so sweet and romantic they almost seemed like horror films but Kate’s were just fun and joyful. We toyed for ages about the money to be honest, it was more than we had budgeted but it was the BEST money we spent on the wedding. 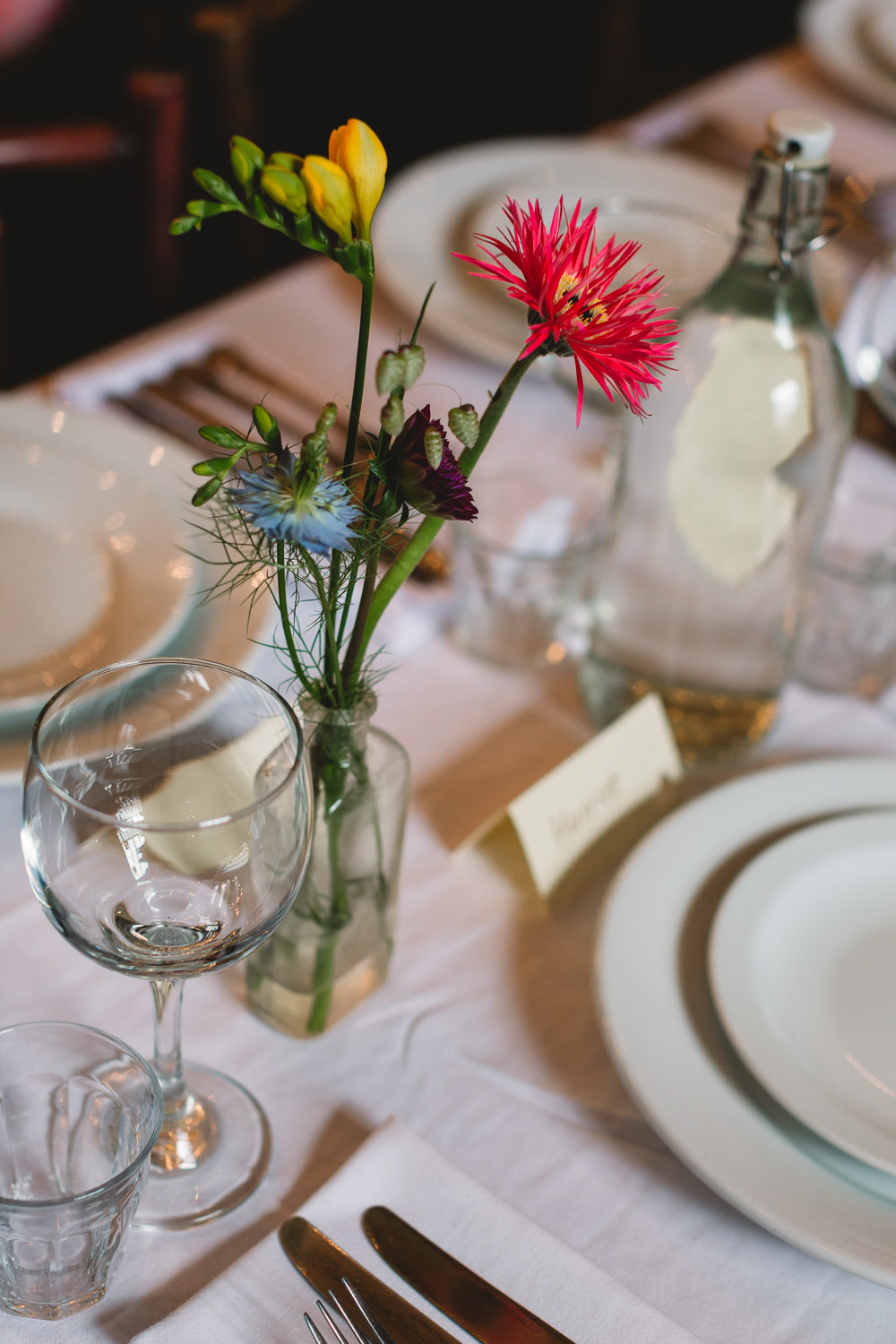 Same as our photographer – Kate Jackson Photography. You can see the highlight video here.

The rest of the decorations were very DIY. Matt’s mum and granny did some floral arrangements in the reception venue. We had a glittery moon because they had it at the venue already and it looked cool. We had some garlands that my bridesmaids had bought to decorate my hen do so we repurposed those. It was a real wonderful mish mash!

We had a minimoon to Italy – it rained. We’re still planning on a honeymoon to Indonesia, maybe for our first anniversary, but the wedding happened in such a whirlwind that we didn’t give ourselves time to book a big trip!

We decided to do a First Look and travel together – the first time we saw each other was amazing, but waiting to get our double deck bus together (which was late) was super nerve wracking. Getting into the town hall and seeing so many friendly happy, smiley faces was great. I really enjoyed the speeches and then of course our karaoke band – I couldn’t believe how quickly the party started!

Despite planning not to have a “first dance” (Matt had been scarred by seeing a super awkward one at a previous wedding) after a lot of wine and a lot of dancing the crowd just parted and made a big space for us whilst two of our friends were belting out Angels by Robbie Williams – so we just had to go for it!

My biggest regret was the ‘guest book’. We love books, so instead of a guest book I bought postcards with book covers on for people to choose their favourite and write some wisdom. The people that did them wrote lovely things, some really funny books were chosen and wonderful wisdom but not many people saw it was there. I wish I had asked one of the groomsmen to be in charge of it and make sure more people signed it.

That was really my only regret. You definitely don’t need as much time as people think, or as much stuff. I had forgotten a few things I had bought for the wedding but it was not missed at all.

Wow! I’m sure you needed your minimoon after all that fun! Thank you so much Amy and Matt for sharing your day with us. Rachel x