WWW readers Sophie and Craig tied the knot on Saturday 16th September 2017 and planned a wedding which was relaxed, colourful and included some rather sweet Harry Potter touches. They tied the knot at the very beautiful Stratford Upon Avon Town Hall and then held their reception at Alveston Pastures Farm in Warwickshire. Being a dry hire venue, they could let their imaginations run wild and boy did they!

With florals that look like they’ve been plucked straight from the meadow and cheeky touches all around, you’re going to love this one – the invisibility cloak hamper really had me chuckling! And what an absolutely brilliant idea to have a wedding cake per table, great when you don’t want to choose just a few flavours. I wouldn’t fancy the pressure of being in charge of choosing which one to take to my table though, I’ll tell you that!

Can we also talk about Sophie’s stunning gown? Jenny Packham’s ‘Esme’ is a beaded beauty and I can imagine that it was perfect for dancing. Meanwhile, groom Craig found his dapper blue tweed suit in Next, such a well turned out pair.

We have Nicola of Daffodil Waves to thank for the marvellous photography today, what a gorgeous set of images! 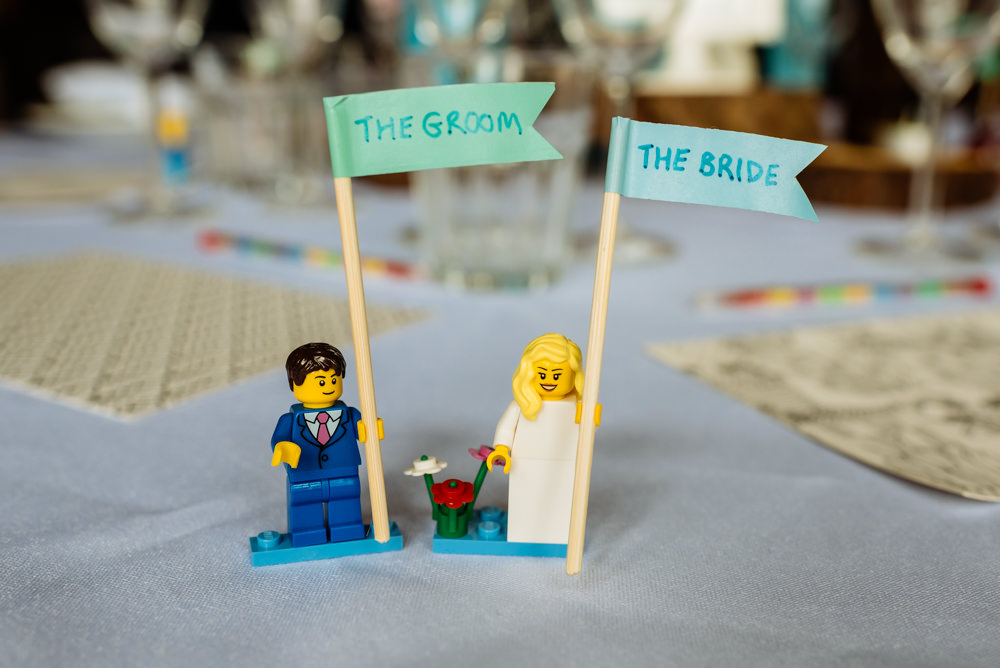 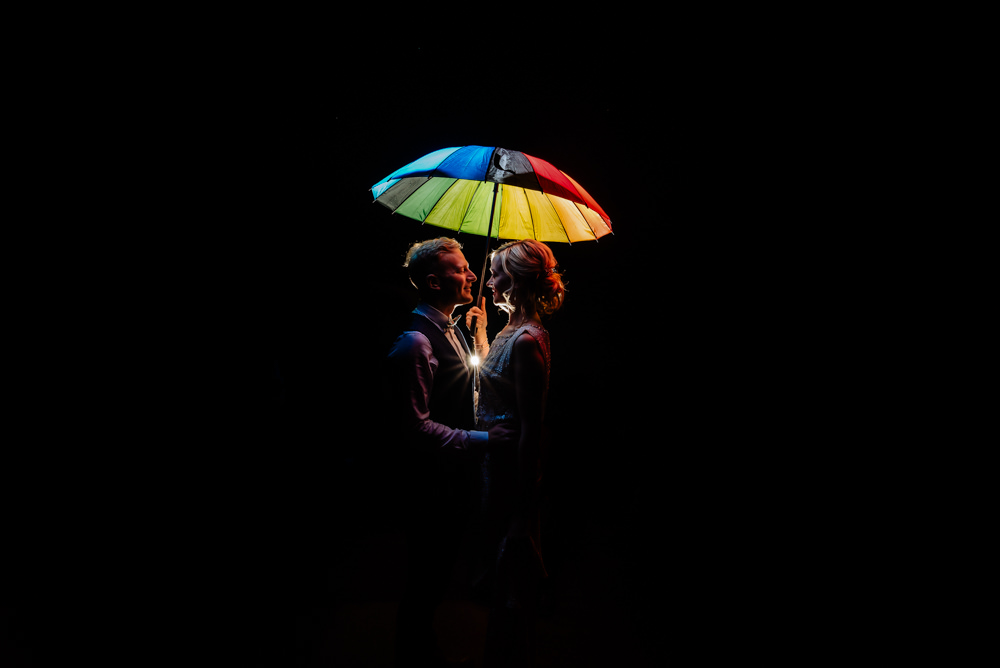 Craig popped the question the day before my birthday, in a secluded spot next to the River Avon. He treated me to afternoon tea and fizz beforehand and then suggested a walk by the river. Being in March, it was rather grey and overcast and I wasn’t overly enthusiastic, particularly since my new boots had started to rub. He convinced me that I really needed to buy some comfy pumps for our holiday the following week, so I put them on and off we strolled. Thank goodness we did. He still jokes that it’s the only time he’s positively encouraged me to buy new shoes!

Laid back, fun and surrounded by our most favourite people. Craig wanted a live band, I wanted a photobooth and an ice cream cart. We both wanted to end up as husband and wife.

We went on holiday shortly after the proposal and spent a lot of time laying on a beach, cocktail in hand, researching venues. We knew that we wanted to get married in the Midlands and ideally, we wanted a dry hire venue so that we could pick and choose our suppliers and provide a free bar. We struck gold with Alveston Pastures Farm. It’s a beautiful barn on the outskirts of Stratford-upon-Avon, with a maze in the garden! It was the only venue we viewed and we instantly knew it was “the one”. Once it was booked, we picked Stratford-upon-Avon Town Hall for the ceremony and then set about choosing local suppliers for everything else.  Our favourite part of wedding planning (besides wine tasting) was hand making each other’s ring at The Quarter Workshop. It was such a fun day and the rings are unique.

Stratford Upon Avon Town Hall for the Ceremony. Alveston Pastures Farm for the reception.

I fell in love with my dress after seeing a photo on Pinterest – such a cliché! Unfortunately, it had been discontinued but I found a sample in The Wedding Shop. Although we were only one month into the planning, I knew that I wouldn’t be happy with anything else until I had tried it on and ruled it out. I didn’t expect that I’d buy it there and then. Taking it home on two trains, one taxi and a walk through central London was a bit of a challenge. The beading made it so heavy but it was definitely worth it! It had several patches of missing beads where people had tried it on in the shop. A family friend sewed them all back on, one by one. The finished result was seamless; she’s like a sewing wizard.

Craig wanted a blue tweed suit and waistcoat and he found just what he was looking for in Next. We put the dads in matching jackets and trousers and the groomsmen in matching waistcoats and trousers. I decided it would be a really good idea to make all of the bowties from floral Liberty fabric. I kept putting it off so it seemed less of a good idea when I still hadn’t made them two weeks before the wedding! They turned out really well though. His shoes were Loakes.

We spent a lot of time listening to potential songs, having fake first dances, whilst being judged by our two cats! In the end, I walked down the aisle to Sam Smith, Latch. It always makes me think of Craig and it gives me goosepimples. Our first dance was to You Make My Dreams Come True. We started off with the Billie Marten version and it then kicked into the original by Hall and Oates. We both love 500 Days of Summer and had always said that it would be “our song”. Unfortunately, Craig forgot to send the music to our band in advance, so we played it through his phone and the venue’s speaker. It was a rather quiet first dance but memorable nonetheless!

We had my sister and four of my school friends. It took a while but we found 5 different dresses which really suited each of them. The dresses were from Debenhams and TFNC. We weren’t bothered about them all wearing the same as long as they felt comfortable. Their clutch bags were from Oasis and their bracelets were from Accesseorize. We had our 3 year old niece as my flower girl. Her dress was from BHS and her shoes were from M&S. She was so excited to have “blue shoes like Aunty Foph” and still talks about them now.

We wanted fresh, local flowers which looked as if they had been scooped up from a meadow. Carol from Honeypot Flowers certainly delivered. She grew the flowers in her garden in Warwick and made all of the bouquets and button holes. She also supplied buckets of flowers which we arranged with friends, the day before the wedding. We filled jam jars and craft beer bottles and there were flowers EVERYWHERE!

I first spotted George on Instagram and loved the look of everything he made. We struggled to pick between his delicious flavours so ended up with 10! We left a ‘you are the chosen one’ card in front of one guest per table. They were called up in turn and given the job of picking an entire cake for their table. Quite the responsibility! I loved walking into Alveston Pastures and seeing the cakes all set up. They looked so good together and they tasted rather nice too. In case you are wondering, we opted for Salted Caramel; Mojito; Raspberry and Pink Champagne; Cookie Dough; Chocolate Hazelnut; Neapolitan; Cookies, Cream and Everything in Between; Grasshopper Pie; Oreo; and Pina Colada. Yum!

We were lucky to have the lovely Nicola from Daffodil Waves Photography. We met for a coffee early on in the planning stage and Nicola instantly put us at ease. She felt like an old friend. She’s very talented and her natural, light and bright style was just what we wanted. We decided to have an engagement shoot in the hope that we would feel more relaxed on the wedding day. We shouldn’t have worried because Nicola and her assistant, Tori, blended into the background and felt like guests on the day. They took lots of candid shots which we will treasure forever. The engagement shoot was definitely worth it though and we would recommend it to other couples. During our one, the rain started and didn’t really stop. We all looked like drowned rats by the end. Nicola was a trooper and the photos turned out great, particularly the ones with our rainbow umbrella. It even made an appearance when it started to drizzle at the wedding!

Whilst not part of our original plans, we decided that we really wanted to have a video to help us remember all of the little details and our guests’ happy faces. Luckily, Patrick from Taylor Made Videography was available. Again, we both really liked his natural, relaxed style and we love the finished result – https://vimeo.com/248647877

We made all of the signs, the table plan and the card box. Craig spray painted our “beer barrow” and our friends made us some incredible Harry Potter props to go with the maze. Every maze needs its own Triwizard Tournament, right? We had Lego figures as favours and handmade little flags to double up as place names. We decorated the barn the day before the wedding with a team of friends and family. There were flowers, fairy lights and tissue pom poms everywhere. It was colourful, fun and informal.

We flew the day after the wedding and spent two amazing weeks in Sri Lanka. Half of the trip was spent exploring, sight seeing and on safari. The other half was spent relaxing on a beach and reliving the wedding.

The walk to the Town Hall with my dad and bridesmaids. The hotel was being refurbished so we had to traipse under scaffolding. The vows and Craig’s beaming face as I got to the end of the aisle. Exiting the Town Hall and being greeted not only by our guests and their confetti, but also a crowd of smiling tourists and a local musician who was singing songs from Les Mis and The Lion King! Eating ice cream in the sunshine and thanking our lucky stars that the rain had held off. Watching everyone run for cover and out of the maze when the rain eventually started at the end of our group photographs – luckily, we were about to eat at this point anyway. Watching everyone laugh as they came out of our photobooth and then dancing the night away to our awesome band.

Think about what is most important to each of you and incorporate that into your day. Pick what you want and don’t be swayed by what others suggest. Spend time with each other and take a moment to soak it all in. When will you ever get so many of your favourite people in the same room again?

Sophie and Craig, thank you so much for sharing your brilliant wedding day with us, such a joy to share your nuptials. Rachel x

Looking For A Florist?

It's no wonder you are considering a sunflower wedding bouquet. If you are looking for ideas for a sunflower bridal bouquet here are 30 bouquet ideas for you.

Sparkle, glitter and shine bright on your wedding day with these stunning sequin wedding dresses. A firm fan of all the sequins? You'll love these gowns.