I think today’s wedding ticks all of the boxes. Beautiful style, exquisite outfits, an industrial venue of dreams and a heck of a lot of love.

WWW readers Laurie and Owen tied the knot on the 21st June 2017 at The West Mill in Derbyshire. Relaxed and elegant was order of the day and they totally smashed it. What with the dreamy rose gold and dove grey colour palette, greenery laden florals and fun touches such as the photo booth. I can totally relate to Laurie wanting to create much of the décor herself. The calligraphy and signage she absolutely aced and the chiffon backdrop was certainly worth the time investment. It all looked SO rad.

The images really are breathtaking here today and I am sure that the couple are over the moon that they booked HBA Photography to capture their day. I mean the whole bridal party looked so gorgeous and carefree too. Laurie donned a long lace sleeved Pronovias gown, Owen was suited and booted in Next ,while the maids wore long dove grey dresses. There are so many wedding ideas and inspirational touches here today WWWers. 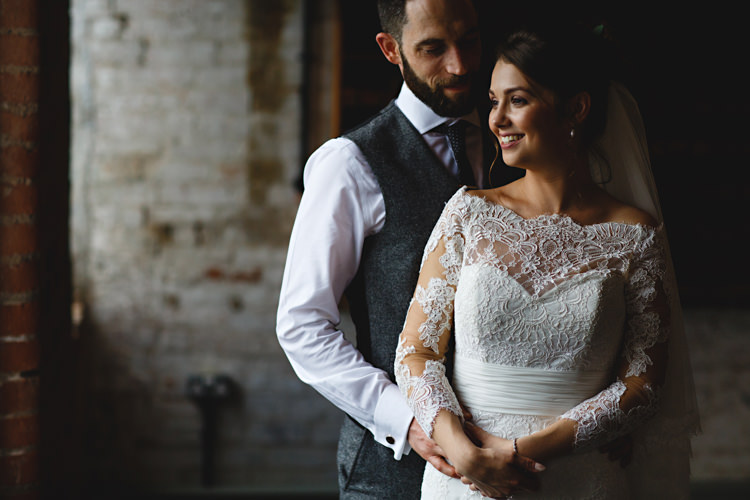 THE PROPOSAL | 2nd July 2016 at The Aqueduct at Chatsworth.

It was a complete surprise; Owen even managed to set the camera up and film the whole proposal, which was amazing to see after!

I’d just come back from a girls holiday and the other girls had been asking if they thought Owen would propose anytime soon; to which I had laughed and said no I don’t think he’s too keen on the whole idea. Little did I know he was out buying the ring whilst I was away!!

THE VISION | Relaxed and elegant styling with an industrial edge. We chose a colour palette of dove grey and rose gold with a focus on greenery and foliage.

THE PLANNING PROCESS | We both knew that we wanted to just get on with getting married, we weren’t into the idea of a long engagement, it just wasn’t for us!  We looked at three or four venues prior to finding ‘the one’, which were all lovely but just didn’t feel quite right for us, I remember asking friends ‘how do you know it’s the right venue’ and they just said ‘you will know’ and honestly that’s exactly how we felt.

There were many spreadsheets at hand that I got to geek out on and meticulously keep, which I really enjoyed. There is nothing more satisfying than ticking things off a list!

THE VENUE | The West Mill. As soon as Chrissie showed us around we were blown away it was just perfect. A little quirky, exposed bricks and finished beautifully. After we had seen the very first floor I was already so sure this was the one!

FINDING THE DRESS | This was one of the hardest decisions to make, I think its because as much as I said I was open to trying any style dress on, deep down I knew I wanted lace and I was pretty sure I wanted sleeves. But I kept an open mind; which I think is the key as some styles I would never have tried on but I did really like.

GROOM’S ATTIRE | After lots of searching for the perfect suit we found exactly what Owen was looking for in Next. The shirt he wore was by Charles Tyrwhitt and he had this monogrammed with initials in the same colour as the bridesmaid dresses to just add that extra something special.

Suit by Next.
Monogrammed shirt by Charles Tyrwhitt.
Pocket Square by T.M Lewin.
Shoes by Next.

THE READINGS & MUSIC | Owen’s sister Amelia read a Bob Marley poem for us that we chose, which was just lovely, we aren’t into traditional gushing love poems so this one really worked for us. And sticking with a theme here our first dance was ‘One Love’ by Bob Marley.

BEAUTIFUL BRIDESMAIDS | I had five bridesmaids. Three of my best friends, my cousin and my sister-in-law, who all got on so well and were just amazing throughout.

The girls dresses were from Fame & Partners but I altered the style of them slightly as originally they were an extreme V neckline, which wasn’t quite what we were looking for.

THE FLOWERS | Dean & Co, Eastwood. Flowers were something that we were a little unsure about as neither of us know much about flowers and we weren’t really sure what we wanted. But when I went to Dean & Co armed with my pinterest board and a rough idea of mainly foliage and only white flowers they saw my ideas and worked their magic.

THE CAKE | Vie for Vegan. Owen’s sister Amelia creates awesome gluten free, vegan cakes so it was no questions we would be having her bake it.  Owen is gluten free and I’m vegan so to get a delicious cake we can both eat is amazing.

YOUR PHOTOGRAPHER | HBA Photography. I had been looking on Facebook quite a while ago and saw some amazing photos of a wedding and thought I must remember these guys if we get married. So as soon as we booked the venue HBA was the first port of call alongside our videographer. HBA worked so hard on the day and we now have so many wonderful memories of the day!

YOUR VIDEOGRAPHER | Our Wedding Videographers. Such a similar story to our photographers, we had seen so many of Geoff’s videos from weddings on social media and we knew we needed to get him on board straight away to get the perfect video of our day.

THE DETAILS & DÉCOR |   I knew I wanted to be really hands on with the creative side of the wedding and being as headstrong as I am I knew I had to do it by myself with little help, except from my Dad. He painted the chalkboards for the place settings and I did all the calligraphy and signage myself. He spent hours doing so many bits and bobs for the wedding. The backdrop we set up the day before; pleating each section of chiffon – I can’t tell you how long it took to get it right!

THE ACCOMMODATION | Hayeswood Lodge, Stanley Common. This beautiful barn conversion was stunning! Dan the owner was so amazing and so accommodating. It was the perfect relaxed setting for me, the bridesmaids and my parents to chill the night before the wedding. Drinking prosecco, eating lots and having a good old gossip was just what I needed to put myself into a relaxed mood prior to getting married. My Dad was well and truly outnumbered, but he embraced it.

THE PHOTO BOOTH | Oh! Photobooth. Was such a fun addition to the wedding, looking over the pictures the next day was hilarious!  We cannot recommend them enough, such a fantastic array of props and a cool looking, non-traditional open photo booth too.

THE HONEYMOON | New York!! We are a little last minute when it comes to holidays by nature and our honeymoon was no exception. Less than a week before our wedding we decided it was time to start planning the honeymoon, we went into Virgin Holidays and told them we would like to book a honeymoon to which the ladies were really excited and asked when we were getting married, I don’t think they were expecting us to say in less than a week and we’d like to go straight after, but needless to say we sorted it then and there. We stayed at the most amazing hotel with a view of the famous New York City skyline and the Hudson River, it truly was an incredible holiday.

MEMORABLE MOMENTS | The ceremony itself was just amazing, it felt like we were the only two people in the room. Surprisingly I wasn’t even nervous walking down the aisle, (which I had been so worried about) I was just so excited to be getting married to Owen!

ADVICE FOR OTHER COUPLES | After all the planning we felt ready to relax and just take in the day and had the attitude of what happens happens, I cant control it, and that is the best advice we could give to anyone on their wedding day is just relax and take everything in! Oh and remember to get some of the evening food and snacks as I was so busy dancing that I forgot… Owen did not!