WWW readers Bethan and Samuel enjoyed a gorgeous sunny destination wedding in the south of France on 9th July 2016. What a dream to feast outside at long banqueting tables under the evening sun and then festoon lighting as darkness fell, an absolute fairytale.

The cornflower blue bridesmaids and flower girl dresses looked fabulous in the summer sun and you have to see Bethan’s cheeky flash of blue shoe – so stylish. She wore a gorgeous Angharad Mullooly skirt and top and groom Samuel cut a dashing figure in his Brooks Brothers suit.

Don’t you just love the laid back but festive atmosphere that they created with bunting and rustic table settings? I think the dried flowers the pair used for their table centres and bouquets look fantastic and are a great idea to minimise waste.

I’m so impressed that Bethan and Samuel organised everything themselves, this isn’t always an easy task in a different country but I’m sure Bethan’s French language skills came in very useful. They focused on spending wonderful time with family and friends, which was especially important, as Beth and Samuel’s families had never met!

Thanks so much to Pippa Carvell for these simply glorious images. 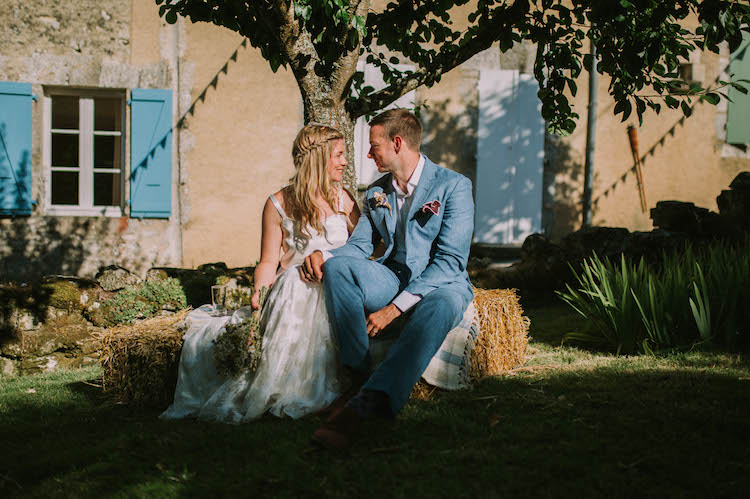 THE PROPOSAL | To be honest, we’d made a joint decision to get married and had booked the venue before Sam gave me a ring! We knew we’d get married after a few weeks of being together back in 2007. I did eventually get a beautiful ring, hidden in a brand new washbag whilst standing completely naked about to get changed into smelly gym gear! The next day we then went on holiday to Menorca and celebrated all week.

THE VISION | Having been together for the best part of 10 years and being from as far apart as you can be in this world, (with the addendum that our families had never met), our criteria was somewhere that lots of guests could stay and for more than just a day. We wanted an informal ceremony, followed by a lazy summertime afternoon relaxing in the sun, with as much of the day as we could outside. Not to mention plenty of drinks and lots of dancing.

THE PLANNING PROCESS | When we started our search, we quickly realised that there were not that many options in this country or abroad which fit the bill. On Google searching we stumbled across this amazing village in France and quite frankly did not believe that we would ever be able to have a wedding within our budget there. With a bit of persistence on my part we went to see it. The first time was a day trip from London in May 2015 and as soon as we walked in there we knew it was the right venue. A ridiculous whirlwind organised by Sam (and when I say whirlwind, we had 45 minutes to run round the village before hopping back into our hire car to speed back to the airport…yes, he got a speeding fine!), and with that we booked the village and paid our deposit. The second visit was in January 2016 and was a more relaxed affair. We stayed for a weekend, ate delicious home-made duck cottage pie, drank red wine and had a good chat to Anneli and Didier (managers at the village) about our ideas for the weekend. Anneli was great in helping us plan the weekend and highlighted things that we hadn’t thought of and made lots of helpful suggestions.

We decided against hiring a wedding planner in the run-up as we thought we’d prefer to spend our money elsewhere. I am a French speaker which was very helpful when having to deal with suppliers and Anneli also helped us out an awful lot in the planning process. Organising our wedding took up a huge amount of time from around January onwards and being a nurse working irregular hours, made it even more challenging. Despite how time-consuming the organisation was, we would still choose to do the same thing again but I think if you don’t speak French/enjoy organising events then it might be a better idea to hire a wedding planner to minimise stress and make things a bit easier.

In the immediate run-up we did a lot of the decorating of the village and the running around ourselves, but for the weekend itself we had Javier and Miguel as our wedding managers who basically organised everything from picking up the baguettes and croissants for brekkie to decorating the tables and serving the drinks until 4am. We couldn’t have done it without them!

THE DRESS & ACCESSORIES | My skirt and top outfit was called ‘Deryn’ by Welsh designer Angharad Mullooly from the Ffrog collection at Rachel Burgess, my necklace was from Pulso on Etsy, my earrings were from Avalley Jewellery also on Etsy, my head-piece was from a lady at Bellapacella stall at Spitalfield’s market and my shoes were by Gaimo from Office. Jude, one of my best friends did my make-up and Sioned, my sister did my hair.

FINDING THE DRESS | It was surprisingly straight-forward and fuss-free. I found my beautiful skirt and top at Rachel Burgess’ boutique in Penarth quite soon after the hunt began. The whole process from go to woe was a total pleasure. Rachel is great, very professional and nothing is too much trouble. I also got to meet Angharad, the designer a few times, who was equally as lovely as Rachel, and she made my outfit to measure me perfectly. I can’t recommend Rachel Burgess’ bridal boutique enough.

THE READINGS & MUSIC | My sisters, Catrin and Sioned along with Sioned’s friend Lara sang a Welsh version of Halleulijah as guests were arriving for the ceremony. Beca, one of the bridesmaids, played ‘Cynghansail y Cymry’ on the harp as I walked down the aisle and to play out the ceremony we had Sing a Happy Song by the O’Jays.

I read Captain Corelli’s Mandolin years ago and decided that the passage where old doctor Iannis talking to his daughter Pelagia about love had to be part of the ceremony. It was only later that I found out that it was quite a common reading to have at weddings. We also had Sonnet XVII by Pablo Neruda, a Welsh version of ‘The Prophet’ by Khalil Gibran and ‘our prayer’ was Desiderata by Max Ehrmann.

The two songs we had during the ceremony were ‘Calon Lân’ a traditional Welsh hymn and ‘Can’t take my eyes of you’ by Frankie Valli. Our first dance song was one we’d decided on years ago when we first got together and was called ‘Carry you’ by Dispatch.

BEAUTIFUL BRIDESMAIDS | My three sisters, two best friends and our niece were all bridesmaids for us. I knew I didn’t want them all in the same outfits and wanted more of a mix and match theme. For 6 bridesmaids that was quite a challenge. I stumbled upon a flowery ASOS dress in cornflower blue and we worked the rest of the outfits round those colours. The long flowery dress, shorter flowery dress and skirt (made from a large sized short dress) were all from ASOS. The tops were from Topshop and plain skirts from New Look. Hattie’s dress was an old, 100% silk cream dress from BHS worn by one of my sisters twenty years ago; I got the puffy sleeves taken off, all the horrible netting taken out and dyed it blue. The first dye job was horrific but thankfully it looked a bit better when I played around with the dyes. I’d left it quite last minute so would probably recommend not mucking around with dyeing silk dresses with days to go until the wedding!

THE FLOWERS | My bouquet, the bridesmaids bouquets and the buttonholes were from the artisan dried flower company. For all the jars on the tables, a florist who lives locally, named Amy Tyson, picked up a load of wild flowers from the flower market in Toulouse that she thought would work well (be robust in the heat, go with the colour theme etc). I decorated the jars at home and carted them over to France in the car, along with the dried flowers. My very artistic and talented best friends and bridesmaids, Beca and Jude spent several hours on the Thursday making up all the jars of flowers decorated the aisle at the ceremony and the tables for the meal.

YOUR PHOTOGRAPHER | Pippa Carvell (Swansea based photographer) who I can’t recommend enough. She fitted in like a dream at the wedding and the photos that she took are just so lovely and really captured the essence of the day.

THE DETAILS & DÉCOR | The village is very beautiful and is naturally a wonderful backdrop to any event. We were aware that having such a large space, decorations could get a bit ‘lost’ so we opted for metres and metres of festoon lighting, some bunting and lots of fairy lights. Blues, greys and creams seemed to complement the venue well. I hired in white chairs for the ceremony, bought some shepherd hooks to line the aisle and hung the wild flower jars. We also hired big parasols for some shade.

For the dinner tables, we had white table-cloths with hessian runners, dotted with tree trunk rounds and lots of small jars with wild flowers. It was quite simple but we felt it didn’t really need much more. As the light faded we had candles and copper lights going down the middle of the tables which worked well.

THE HONEYMOON | We had a week with both families after the wedding in a nearby chateau found on AirBnB and then we had a couple of nights in Normandy on our own at the end as we drove back up to the UK. We’re still in the process of planning a belated honeymoon this year.

Walking up to the terrace where we were having dinner as the sun was setting and seeing all the tables decorated with the wild flowers, in the pink light, with swifts flying overhead and all the people that we love in the same place….it was really special

ADVICE FOR OTHER COUPLES | With any wedding, costs can spiral pretty quickly and you can always spend more and more. At a point when we both felt things were getting out of hand, we wrote down our top 5 priorities for the wedding and compared. Luckily they were similar. Focus on the most important aspects…whether it’s having a band, amazing lights, great food etc and forget about the ‘extras’ that you people say you should have. Look to work your way around the escalating costs, for example, my good friend Flo who lives in Montpellier picked up all the cheese for us at a fraction of the cost of what it would have cost to get someone to organise it separately. We saved lots of money by roping in friends and family with things…thank you!!

My other tip would be to not get too hung up about details, either in the run-up or on the day. I had a specific idea for the weekend but when we got to the village I had to delegate tasks to people otherwise we wouldn’t have been able to do it. On the day, we forgot to put out the order of ceremonies, the music started up for the first song and barely anyone was singing and then we realised! We stopped the ceremony and someone went to get them and we were all in hysterics.

Not everything will be totally perfect on the day and that’s okay. Just let it go over your head and enjoy the day.

Ice cream cart (had on Sunday) | Lisa at [email protected]

Thanks for sharing your French fairytale with us Bethan and Samuel, I can almost imagine the sun on my face! Rachel x