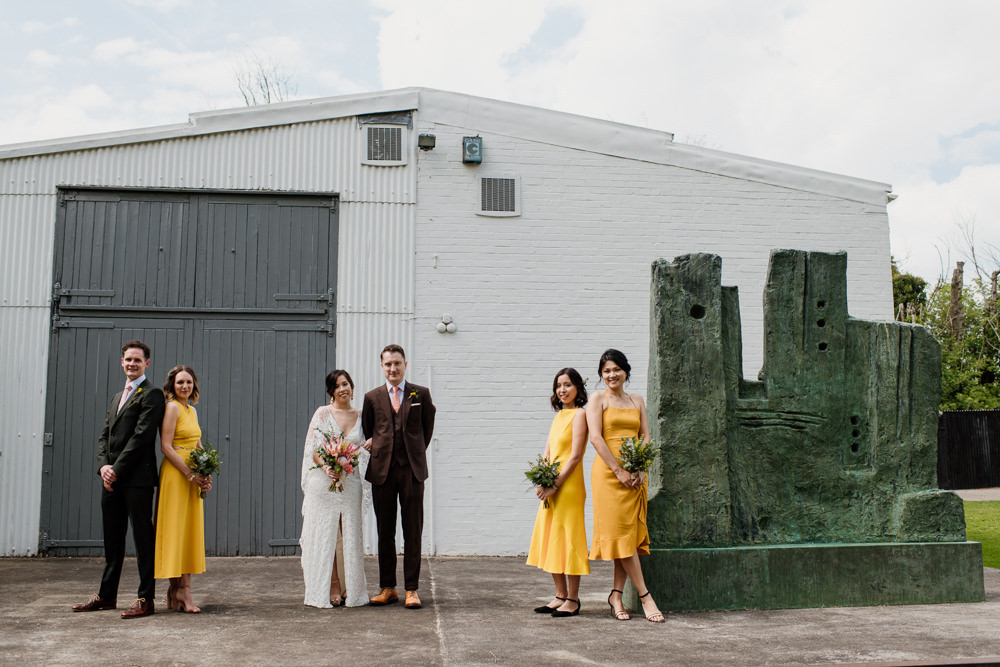 We are in Hertfordshire today, at Henry Moore Studios & Gardens to be precise for Mel and Rob’s wedding day, which was held on the 18th May 2019. They described their day to me as “relaxed, informal, modern” and their vision was for a “cracking day out” for their guests. I love how they didn’t take themselves too seriously and simply planned a wedding which was representative of them both. Their wedding turned out to be really cool with seriously stylish outfit choices, sublime flowers and awesome signs and stationery.

Mel chose to wear WWW Supplier Love member; Grace Loves Lace‘s Verdelle gown, which looked incredible, meanwhile Rob opted for a brown wool suit, with colour pop buttonhole to tie in with the vibrant yellow bridesmaid dresses. Another WWW Supplier Love member, tipis4hire provided the tipi, which was the perfect base for guests when the barn was turned around from ceremony to reception. I just love how they decked it out in Bowie inspired décor too. Awesome!

The amazing images are courtesy of Ellie Gillard Photography and I am just so grateful to be sharing them with you. Enjoy it all folks.

We were on holiday in Australia (where Mel’s from) in a wine region called the Hunter Valley. We had just had a day of wine tasting and been out for dinner (with more wine) so we were feeling a bit fuzzy. Rob waited til we were alone on the balcony at our hotel overlooking the countryside to ask. I knew something was up as he said we should start the meal with some champagne!

We just wanted the day to reflect us as a couple… Not taking anything too seriously, with nods to where we’re both from. Most of all we just wanted to put on a really nice day where our family and friends could all catch up and have a cracking day out.

Having quite an extensive wardrobe I thought it would be a big task finding the right dress. I knew I wanted something that was sophisticated, but also contemporary with a little something different about it. I saw a photo of a bride wearing the Grace Loves Lace Verdelle dress on Pinterest and was obsessed with it. Luckily they had a showroom in London and when I tried it on I knew it was the one. I’d never seen a dress like it before with it’s kimono type sleeves– it just looks great from every angle. It was SO comfortable to wear with no zippers or boning or anything. Just stretch lace. It was also a bonus as they are an Australian brand!

I managed to buy it at one of Grace Loves Lace’s sample sales. When I arrived I saw the line and thought no way am I waiting. But I had a friend with me and she convinced me to stay. We waited 3 and a half hours and I managed to bag one in my size for half the price.

The dress was so amazing with loads of detail I just got a pair of statement earrings from Annie Costello Brown. I’m not a big shoe person and am rarely found out of trainers so I just got some blush pink suede platform heels from Topshop and a pair of sequinned Converse to change into.

I also had a leather jacket hand painted by the amazing Rachel Joy. I didn’t want the usual calligraphy, I was after something more modern so Rachel’s style was perfect. I used a reference to Curb Your Enthusiasm – a bit of an in joke – but to everyone else it just seemed mushy!

Rob’s suit was from Beggar’s Run in Shoreditch. He always wanted it to look quite 1940s. Beggars Run use wool that’s woven in Yorkshire.

The first thing we had to nail was the venue. We had been to the Henry Moore Foundation a few years before getting engaged. There was a wedding on at the time and we both thought it was a lovely venue. So it was the first one we approached and visited. We briefly flirted with having the wedding in London but nowhere we saw felt as special as Henry Moore felt.

Both being designers we did all the styling, decorating and design ourselves.

The Henry Moore Foundation in Hertfordshire is the former home of Yorkshire born artist, Henry Moore (another Northern link for Rob!). His home is on the site, along with various workshops, vast grounds dotted with his sculpture and a 16th century barn. We had the wedding in the barn, and then hired a tipi so our guests had somewhere outdoor to hang out while they converted the room from ceremony to meal to dancefloor.

Guests could roam around to view the sculptures, and while a few did, a lot stayed close to the bar and the food!

I’m so glad I found Zoe at Knot Your Average Bride. I had visions of easy breezy Alexa Chung type vibes for my hair and make up as I’m fairly low maintenance in both those departments. I didn’t want to not look like myself with loads of make up on and Zoe managed to make me look like an elevated version of me.

I also got a half moon manicure with gold foil from Dry By in London.

I had three bridesmaids who all wore yolky yellow dresses. They all have different styles so I got them to pick their own dresses. Two of them were in Sydney and one lives in Edinburgh so I didn’t see them all together til the day of the wedding! Thankfully they all have great style and looked amazing on the day. The dresses were Calvin Klein, Warehouse and Atmos&Here.

We had the Home and Away theme song read out as a reading. The words are so over the top and we thought it was funny. People didn’t twig what it was until the final line ‘closer each day… home and away’.

We also had Rob’s sister read out the lyrics to “Happy to Be Stuck with You” by Huey Lewis and the news. The sweet sentiment of the song suited our relationship trajectory!

Music is a big part of our lives so we spent ages deciding on music. We just created spotify playlists for each section of the day and Rob (with the help of some software) mixed the entire disco playlist which took you through Northern Soul, 80s cheese (gotta have Kylie at an Aussie wedding!), 90s hiphop, Britpop, and lots of indie disco.

Our flowers were supplied by Hackney based Grace & Thorn. We wanted eucalyptus to be everywhere as another nod to Australia, and also native looking flowers like protea and craspedia (billy balls). The craspedia was also used in the buttonholes for the boys – a nice pop of yellow to tie in with the bridesmaids.

Lovely Ellie at Ellie Gillard Photography. We picked her because her portfolio was great in capturing those ‘in between’ moments as well as the big joyous ones.

The barn was such a beautiful space we didn’t want to do too much to it. We used some foliage garlands to wrap around the pillars and had a foliage and fairy light wall also. Our table names were named after pubs that meant something to us – so we had a pub quiz picture round on all the tables.

The tipi had a bit more decoration. With it being Bowie themed we wanted a giant lightning bolt hanging down into the centre of the space – unfortunately getting married in May meant there was a chance of it being on the chilly side so we had to add a fire pit the day before the wedding. We did still have a 1.5m tall piñata lightning bolt but it was relegated to the side of the bar.

We hired an original red post box for cards, and flanked them with pictures of our parents on their wedding days. I also commissioned lettering artist Rachel Joy to paint a ‘dance like you’re Northern’ sign as a wedding gift for Rob.

Straight after the wedding we went to Puglia – though we missed our flight! After all the intensity of planning the wedding and being on top of things we dropped the ball right before we could truly relax!

We lived in Hackney together and was often at Netil Market on Saturdays having a slice of cake from Victoria Yum. She always does amazing displays and beautiful decoration with fruit and flowers – and obviously the cakes are always delicious!

We didn’t want a traditional wedding cake so we had three different cakes that people could help themselves to with a cup of tea.

We had a Chinese lion dance that we kept secret from the guests. They performed after we’d had dinner and the guests were all having a drink outside by the tipi when we heard the drumming signalling their arrival. A lot of the guests might not have seen one performed so it was something a bit different for entertainment.

The best man’s speech also had a really clever interactive spin – we got married on Eurovision night so there was some enthusiastic flag waving going on.

Don’t worry what anyone else thinks – do your day your way. It’s the one day you can be selfish and make it all about the two of you.

We regret not staying together more on the day – it’s easy to be separated talking to your own friends or family.

Just so full of personality, awesome!

Mel and Rob, huge thanks to you both for sharing with us your extremely brilliant and modern wedding day xo Lou