Happy Monday folks! I trust you had a good weekend? I am back from our holiday now and am in the office bright and early. What better way to start the week than with the beautiful Glynde Place wedding of WWW followers Steph and Rob? They were married in the East Sussex countryside on the 1st June 2019 followed by a glorious marquee reception. There is so much I love about their day, but can I please start with those coral charm peonies?! I am obsessed, OK so I do grow them in my garden, but by golly how beautiful they look in all of the opulent flower arrangements at Steph and Rob’s nuptials.

Next up, Steph’s dress, hello there long sleeves and tiers of dusty pink lace, it looked amazing with her veil and celestial headpiece. Meanwhile Rob was suited and booted in a blue check suit, print tie and tan brogues, very dapper indeed. They looked so amazing didn’t they?

I will leave you with these sublime captures by Sarah London Photography, thanks so so much for sharing them with us Sarah.

Christmas day is my favourite day of the whole year – I love the food and watching everyone opening their presents, all the films and everyone dressing up. Rob knows how much I look forward to it and on Christmas Day morning in 2017 he put my favourite Christmas film on, we opened presents and then he presented me with ‘one last gift’.

We were both in pyjamas surrounded by wrapping paper next to the tree and it was perfect, I cried like a baby.

Rob had more opinions on the venue than I thought he would, and we went to visit 3 in total. We knew we wanted the opportunity to be outside in case the weather was nice, an intimate ceremony room and somewhere with a bit of history.

Overall we wanted to create a day that was relaxed and fun, and once we found the venue the main focus was the food, drink and music which we knew would be important to both of us.

Rob was definitely a voice of reason when I was sweating the small stuff, but I still had spreadsheets to track costs, notebooks and to-do lists.

Our first plan of action was to find the venue and then go from there – we had a year and a half until the day so I spent a lot of time finding wedding inspiration from Instagram accounts and Pinterest and then finding suppliers who matched that vision.

Our chosen venue was Glynde Place which as soon as Bryony took us round we knew it was where we wanted to get married. The ceremony room had gorgeous dark wood and big windows and the grounds had lovely views.

We also hired a load of deckchairs for guests to use before and after the meal which was a small expense but completely worth it as the weather was boiling on the day and meant they didn’t all have to sit on the grass!

The venue didn’t need much styling apart from flowers and candles and Lib completely blew us away with what she created in the ceremony room and marquee.

I gave Lib an idea of what sort of colours and flowers I liked and she created a complete brief for me to look at before even paying a deposit!

Lib was also super flexible when I asked for additions later down the line, and the flowers were something everyone commented on throughout the day they were absolutely amazing. 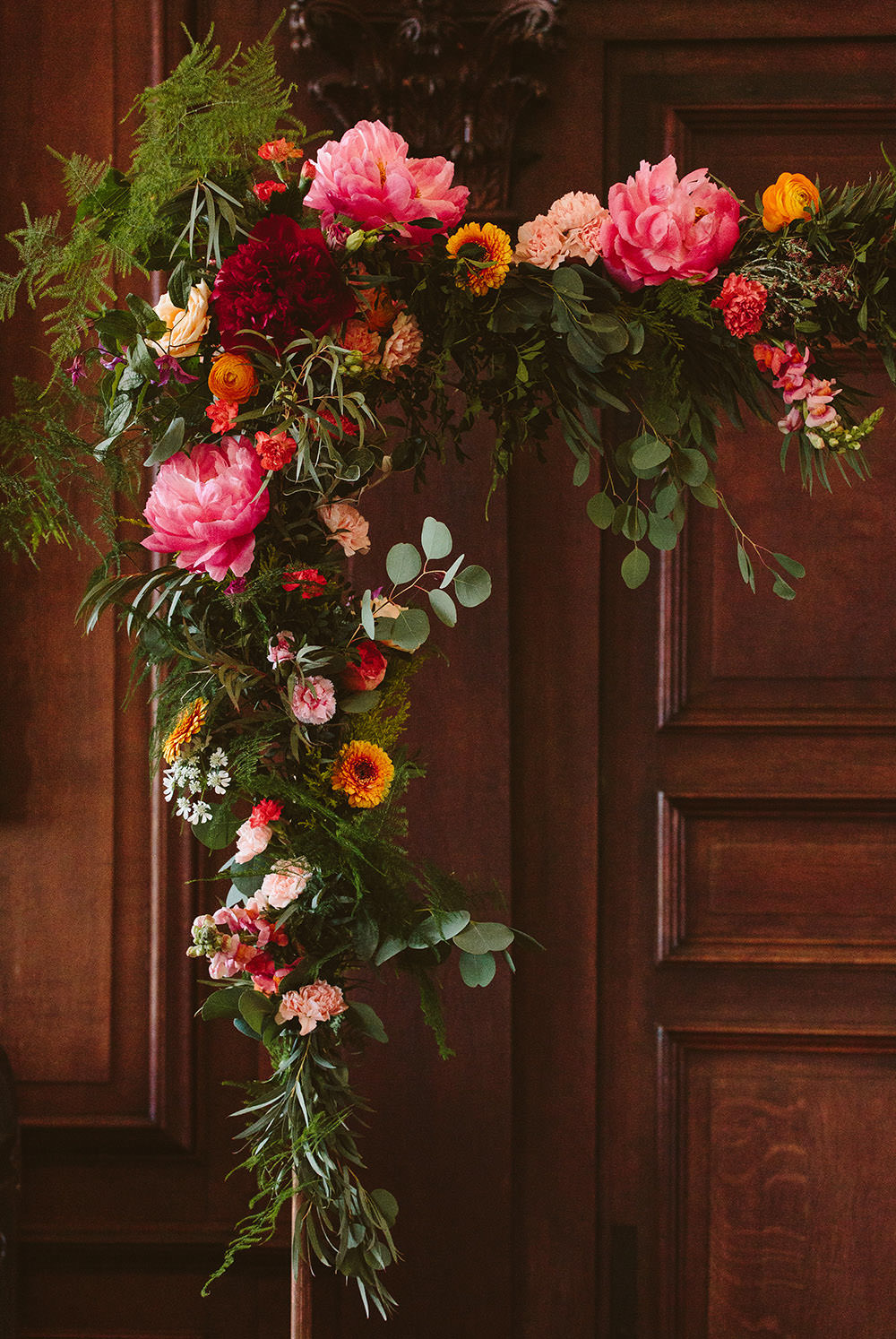 I knew I didn’t want to wear white, and the whole idea of bridal dress shopping made me really anxious. I knew I wanted some sort of sleeve and didn’t want backless so that narrowed things down already! I found my dress on the Needle & Thread website, tried it on at my parents and that was it!

I then spent more time looking for a veil to match which I found on Etsy from a brand called Blossom & Bluebird, they were very helpful sending samples so I could match it to my dusty pink/champagne colour wedding dress.

I also bought a headpiece from Miss Clemmie bridal accessories, I knew I wanted something which would make a statement but not too ‘princessy’.

Rob found his suit via Moss Bros which was Ted Baker, it had a really nice subtle check running through it which made him stand out from the groomsmen and he had a three piece suit rather than two, he looked so handsome!

I found his wedding shoes at Shoe Embassy which were a lovely brown brogue but the sole looked a bit more like a Grenson shoe.

It was our anniversary a couple of weeks before our wedding and he was freaking out about shoes so I gave them to him then and he was so happy with them.

We didn’t have any readings during the ceremony, and our playlist before the ceremony was a mixture of motown and jazz.

We had the lovely Paddy at Discowed as our DJ and we gave him a playlist prior to the day to give him an idea of our music tastes, I think he smashed it as there were plenty of people on the dancefloor and my friends kept dragging me over!

Straight after the ceremony we had a pianist called Richard Sully play whilst everyone was having drinks, he played at a friend’s wedding before we even got engaged and we said if we ever get married he’s got to play at ours!

My mum really wanted me to have a bridal hair trial with Will Ackerley her hairdresser and she spoke so highly of him I had to see what all the fuss was about!

Will understood that I wanted a soft curl and nothing too structured but that would stay put. We initially tried a very deep side parting but on the day it made more sense to me to have a middle part with my headpiece.

Two of the girls decided on up dos for the day which Will created with small star and moon hair pins from Etsy which looked so magical, my other two bridesmaids had very short hair but he made sure they looked super polished with their celestial headbands! He also gave me the most gorgeous colour in preparation for the day.

Poppy was mine and the bridesmaids make-up artist and I had a trial before the day, the girls just winged it!

I was so pleased with my make-up and ended up going for false eyelashes last minute which I never thought I would, and the girls looked beautiful. I gave my mum the option to have hers done and she said no, by the time we were all dolled up she said she wished she had!

I found these via Debenhams and the brand was called ‘Little Mistress’.

My bridesmaids all had quite different figures but I wanted them all to feel comfortable on the day and they all really liked this style so I hit the jackpot!

Rather than go for a lighter colour we decided on a dark teal which looked so beautiful on all of them and made the flowers really pop. There were a few alterations here and there but nothing major (one of them wanted a slightly higher thigh split!).

Rob went with his best man to look at groomsmen suits which they ended up renting from Moss Bros, they were a similar colour to Robs but slightly darker and two piece.

I found the bridesmaids dresses quite early on so wanted their ties to be slightly in keeping with their colour but not too ‘matchy matchy’.

I ended up finding some ditsy floral pattern ties from Burton and pocket squares from Etsy which brought out the green colour of the girl’s dresses.

The décor was mainly the flowers which really made a statement, we also had tea candles on the tables and I bought some mimosa print table runners from h&m which added something a little different rather than just having plain white table cloths.

We had gorgeous floral wreaths hanging from the ceiling in the marquee as well as festoon lighting. We wanted more of a ‘big family meal’ feel with the long trestle tables and our food was all big Italian sharing platters of antipasti, pasta and short rib/parmigiana so extra touches of decoration made this space really special for us. Sara our caterer bent over backwards for us before and on the day (she even managed to source my absolute favourite antipasti – stuffed zucchini flowers!) we had so many compliments on the food, I wish I had eaten more but was worried about getting any on my dress!

We also had a horsebox cocktail bar for the evening and pizzas for when guests needed to refuel later on which really made a difference – although Rob and I never got round to having one!! We wanted to focus on flavour for the cake and not have anything too over the top decoration wise, so opted for three tiers (coconut and lime, salted caramel and hazelnut, raspberry and white chocolate) with a simple buttercream and some gold drips and macaroons (Rob’s favourite!) Lib then decorated with some flowers for us as the finishing touch. We still have the largest tier in our freezer!

Sarah was outstanding before and on the day, I didn’t realise how uncomfortable I would feel doing the portraits until we were actually having them done – but she made sure we didn’t take too much time and we managed to get all the family members in. The images we received back from Sarah showed so many little moments of joy between Rob and me and our guests, without us even knowing she was there! We are so pleased with the photos and she did a fantastic job. 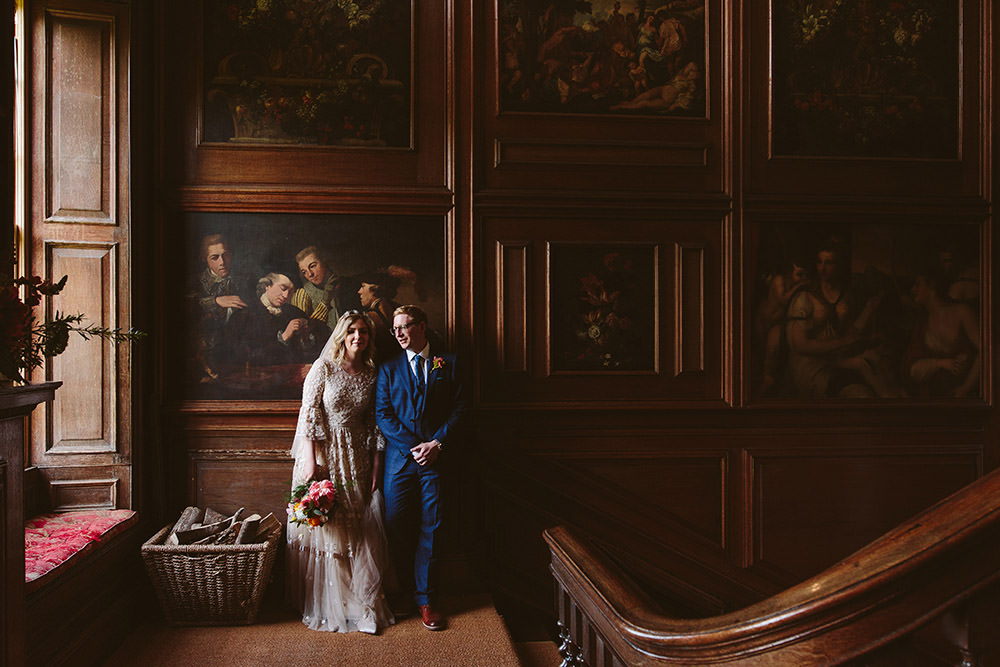 Rob and I went to Tulum in Mexico a few days after the wedding and it was exactly what we needed, lots of margaritas and tacos were had.

Our ceremony was the most memorable moment for me and walking down the aisle with my dad, I was so nervous but I remember everything so vividly. Rob said it was when he saw me at the end of the aisle but I thought he was going to say his speech!

I also really enjoyed the photobooth as guests could have something to remember from the day and we had so many fun silly ones, our floral archway from the ceremony also doubled up as a backdrop!

It’s all over in a heartbeat so just make sure you spend enough time with your partner and steal a few moments in amongst saying hello to everyone.

Perfectly pretty in every way.

What's not to love about pretty florals? Check out this ultimate wedding bouquets idea gallery to inspire your bridal bouquet of dreams.

Check out these 42 incredible wedding arch ideas that are sure to light up your imagination. Make yours shine no matter your arch style or budget.