WWW readers Kay and Ciaran wed on the 5th August 2017. Their day was an event of three venues, each with its own special atmosphere. The ceremony took place in New Walk Museum under the watchful eye of a few dinosaur guests, followed by a blessing at nearby Holy Cross Church and good old fashioned dinner and dancing at Seagrave War Memorial Hall. It sounds like guests were treated to a really lively party, with plenty of musical talent on display and of course lots of dancing.

Our pair really poured their time and creativity into their wedding, resulting in a truly personal day that was full of fun! I think the ‘Til Death Do Us Party’ backdrop on the stage is just brilliant, can you believe that Kay made it herself? The flowers were also DIY, and loads of the other décor too. Rather than having one wedding cake, expert bakers amongst the guests provided delicious cakes to keep Colin and Connie the caterpillars company! Everyone loves a good temporary tattoo and it looks like the guests went to town on these too!

Thanks to wonderful WWW fave Danielle Francesca Photography for providing the fabulous images we are sharing with you today. 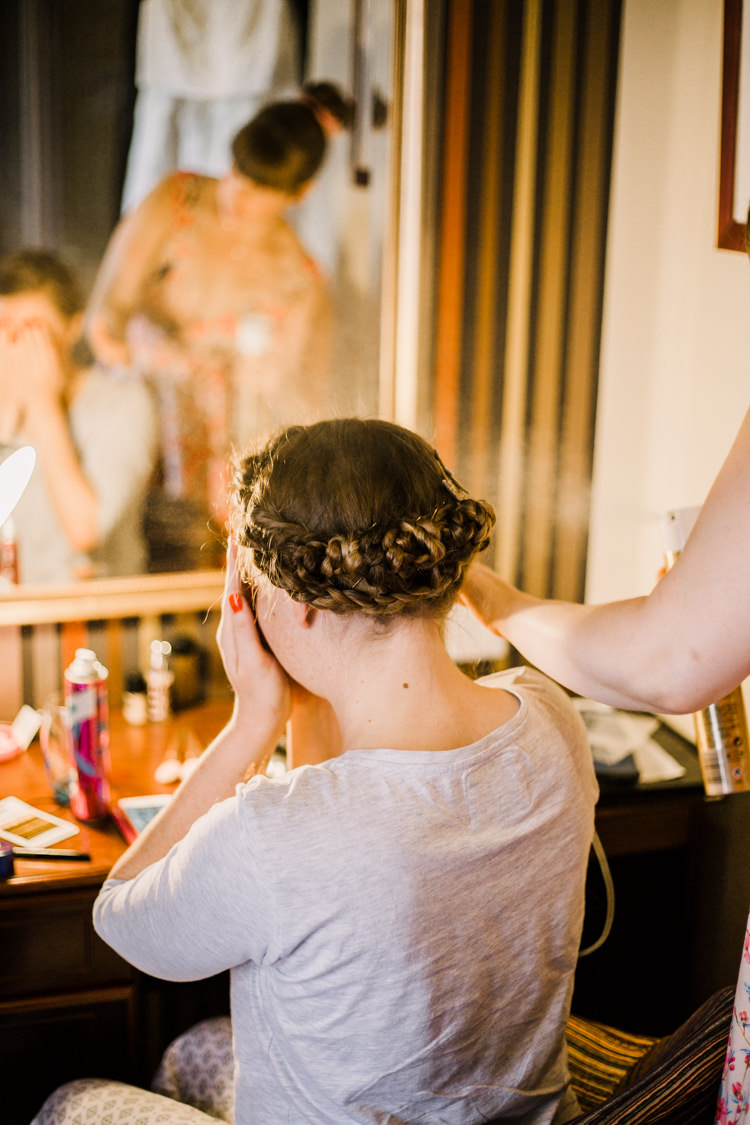 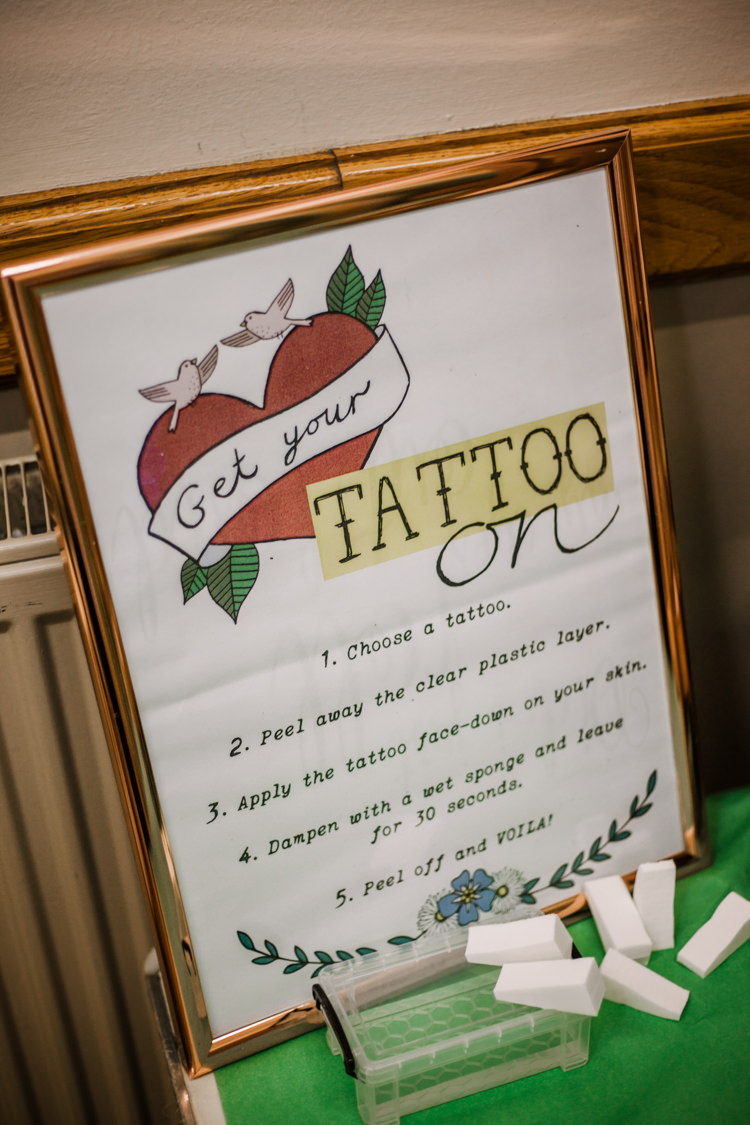 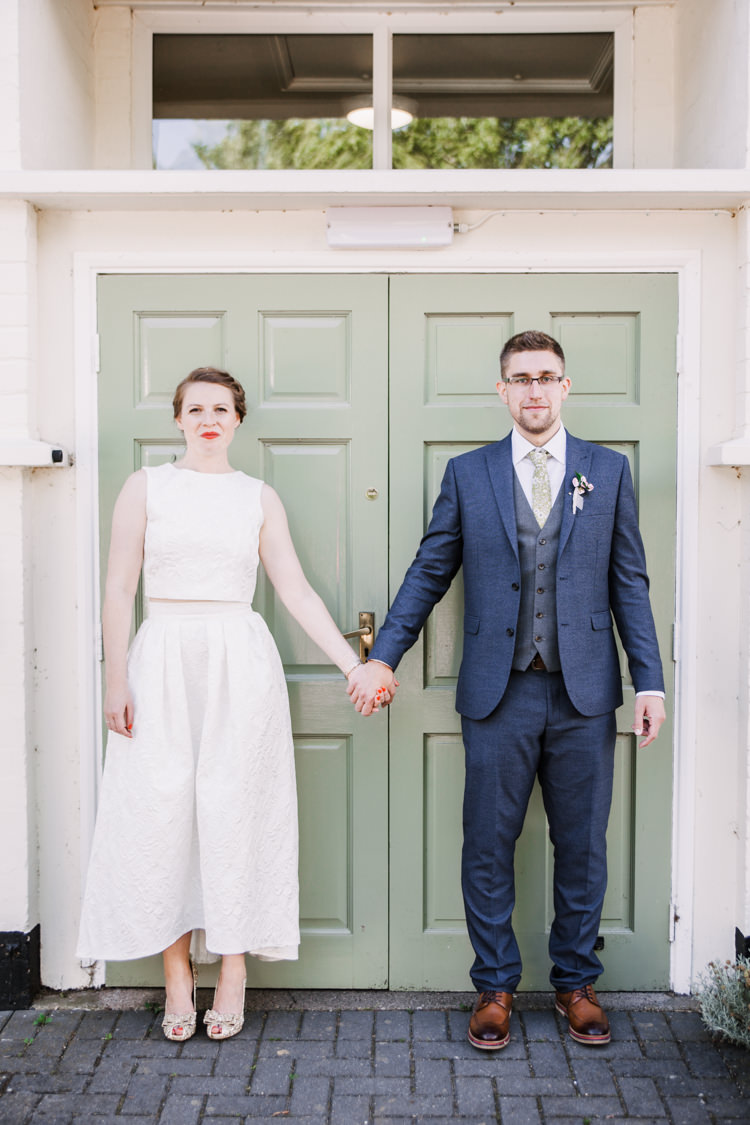 THE PROPOSAL | In August 2016, on an amazing trip to NYC, Ciaran proposed spontaneously after we came out of ‘Shakespeare in the Park’ in Central Park. He didn’t have a ring, but it meant we could choose one together on our last day in Brooklyn. After much Googling, Ciaran found a beautiful little jewellery shop in Williamsburg called Catbird; it was really special that the ring was also a memento of our adventure in NYC.

THE VISION | Hmm…no specific vision really. I started off Pinteresting everything and we sort of decided on a colour scheme but in the end it just ended up a mix of lots of different things that we liked all in one place. We wanted it to be relatively informal, for people to be relaxed and just have fun!

THE PLANNING PROCESS | We decided on a date fairly quickly so once that was done, planning basically consisted of a Pinterest board!

BUDGET | We didn’t set a specific budget but tried to be sensible and DIY as much as we could ourselves. The biggest expenditure was the scrumptious food, which there was loads of, all day!

THE VENUE | The marriage ceremony was at New Walk Museum in Leicester, surrounded by beautiful paintings (and the odd dinosaur!). We then had a blessing only metres away at Holy Cross Church. The reception was held at Seagrave War Memorial Hall out in the country. We were transported there on vintage double-deckers.

THE DRESS & ACCESSORIES | My outfit was a top and skirt by Bouret from Rock the Frock in Chelmsford, Essex. The top had an exposed back so I bought a back necklace (is that what they’re called?!) with a hanging moon and stars from Topshop. I wanted a bit of sparkle and found some barely-worn gold glitter Dune heels on Ebay for £15! I bought matching star-shaped shoe clips from Charlotte Mills.

FINDING THE DRESS | I spent a loooong time looking for dresses. I was also determined not to spend a ridiculous amount, instead opting to try on lots from the ASOS bridal range. Although the designs were lovely, none of them ever felt right or looked as good as they did on the website! I stumbled upon Rock the Frock’s website and was wowed by their amazing collection of very different styles. I knew I didn’t want anything traditional and it seemed more up my street. I tried on a few different options and settled on the two-piece by Bouret. Yes, it totally went against my initial outfit budget but the skirt had pockets! Say no more.

GROOM’S ATTIRE | Ciaran wore a bluey-grey suit from Next, with a DKNY shirt. His floral tie was from Etsy and his shoes were custom-made by shoe designer Anthony Miles (they even had his name printed on the sole!).

THE READINGS & MUSIC | Ciaran’s father and brother played traditional Irish music while the guests were waiting before the ceremony and our friend Mark played Boy Meets Girl’s 80s classic ‘Waiting for a star to fall’ on the Steinway piano as my sister and I walked down the aisle. We had three readings: the first, Ciaran’s mum read Sonnet 116 (we’re English teachers so had to have some Shakespeare!); his brother read an extract from The Sandman by Neil Gaiman and lastly, my friend Dom read an extract from The Amber Spyglass by Phillip Pullman. Ciaran himself plays drums and the violin, so later at the reception, he played a set of brilliant covers with his very talented friends and his current band, The Whiskey Rebellion, played their own brand of gypsy folk rock.

BEAUTIFUL BRIDESMAIDS | My sister Gwen was my bridesmaid, and she got an absolute bargain of a bridesmaid’s dress from Pretty Kitty Fashion for £16!

THE FLOWERS | On the advice of a friend who recently got married, we went to a flower warehouse on an industrial estate in Leicester and had a lovely time just picking flowers we liked! Ciaran’s mum’s friend, Mary, made the bouquets and centrepieces and my mum, sister and Ciaran’s mum helped put together flowers in bottles we had collected for months from charity shops and markets.

THE CAKE | Rather than having one cake, we decided to have a cake table and invite people to make cakes, the more the merrier! They were all fantastic (vegan red velvet? SO good!) but special thanks to our friend Ruby who made an amazing multi-layered rainbow cake with drip icing AND cupcakes with cherries dipped in glitter. Despite having so many amazing home-made cakes, we couldn’t resist buying two wedding themed huge Colin the Caterpillar cakes from M&S!

YOUR PHOTOGRAPHER | Danielle Francesca Photography. From our engagement shoot to the last moments of the big day, Danielle was absolutely fantastic. Neither myself or Ciaran feel particularly at home in front of the camera but she encouraged us to just have fun and completely relaxed us. She’s also a super fun wedding guest and we got lots of compliments from our guests about how lovely she was.

THE DETAILS & DÉCOR | We’re both a bit creative so wanted to DIY quite a lot of it. I designed the stationery and made the bunting and signage on stage. It was a lot of work but fun and meant it really was ‘us’. We love the outdoors and nature so wanted a bit of that combined with a party/fete atmosphere. We bought pin badges from the RSPB for wedding favours which went down well, as did the tattoos and glitter stations in the reception hall. We’re both Leicester City fans so each table was adorned with a framed picture of a player from their League title–winning season!

We hired deckchairs for outside (great when the sun finally came out) and set out hula hoops, jenga, bean bag toss and croquet. It was important to us that everyone was always entertained! Luckily, we had lots of friends and family who wanted to help us set up everything we had arranged (including an epic wall of ribbon), we couldn’t have done it without them.

THE HONEYMOON | We love the Steve Coogan and Rob Brydon show ‘The Trip’, so planned a similar foodie trip to the Lake District. It was AMAZING, but once-in-a-lifetime stuff!

MEMORABLE MOMENTS | Ciaran forgot to bring the bouquets for my sister and I so my superstar friend Lisa did a last minute dash (literally) to the Tesco across the road for flowers, just as we were leaving for the ceremony. They were a brilliant substitute! Ciaran and some of his best men performing a punk version of ‘2 Become 1’ was absolutely classic. The kids running round COVERED in tattoos and glitter was lovely and hilarious to see. Being married and spending the day with so many important people was just lovely.

ADVICE FOR OTHER COUPLES | We packed a lot in to the day. I’m a bit karaoke obsessed so hired a karaoke guy/DJ but coupled with the two (excellent) bands, we quickly ran out of disco time.

What a fabulously fun day you both had! Thank you ever so much Kay and Ciaran for sharing your hard work with us today. Rachel x