This vibrant wedding filled with sage greens and daffodil yellows, really brightened my morning. You can just feel summer in the photographs, with lush country surroundings and a spectacular sunset to boot.

Sean and Rachel were married on the 8th July 2016 at Grendon Lakes in Northamptonshire. They set their hearts on a festival themed wedding complete with glamping and named the celebration ‘Nearyfest’. How awesome is that? Festival signs were used along with coordinating stationery, natural blooms and of course a VW Campervan for transport.

How wonderful did Rachel look in her flowing ‘Delanie’, Sottero and Midgley gown? Sean meanwhile looked the ultimate stylish groom in a velvet jacket and bow tie. Such a gorgeous pair and their day will be sure to blow you away today.

Thanks so much to Aaron Storry for sharing these incredible shots with us. 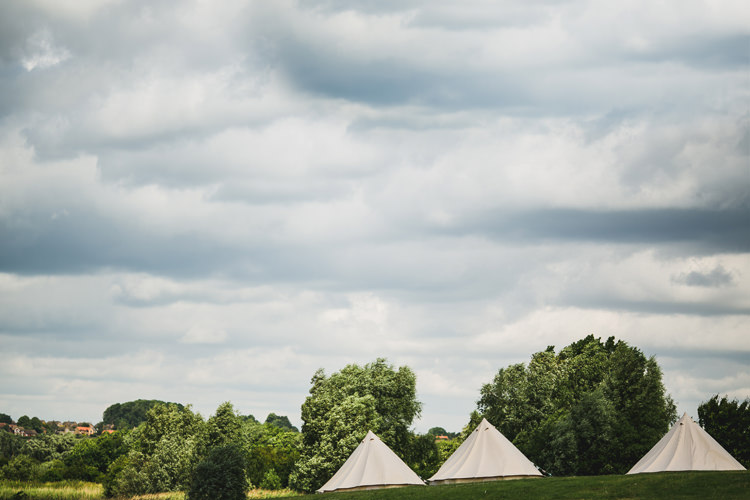 THE PROPOSAL | Far from romantic! We had been together nearly 6 years and everyone was expecting it. We’d just bought our first home, I’d dropped plenty of hints on the perfect ring so any sniff of a romantic meal or date night would have been too obvious. Instead Sean came home from work one day, claiming to have forgotten his laptop, I’d just got out the shower, he popped the question then and there! I was in shock and completely took me by surprise!! After telling the world, he took me away for a romantic night to Fawsley Hall.

THE VISION | Something with a theme that represented us as a couple and what we love. At first it was going to have a ski theme, but wanted it in the summer so wrong season, although Sean found that even more appealing. Glastonbury is a yearly event for us so we decided on a festival theme and named it #Nearyfest.

THE PLANNING PROCESS | The proposal was in May, the registrar and venue booked in September, then the rest just seemed to happen. I had a notebook with loads of lists in it, because I like ticking things off. Sean was adamant to have an excel spreadsheet but that never happened.

THE VENUE | Grendon Lakes, it was the most perfect venue for the festival theme as it has glamping facilities-bonus!! We went to look at it and instantly fell in love, the girls there were really good at helping achieve our vision, and they were super relaxed and flexible with everything we wanted. They also had on-site caterers ‘Creative Event Services’, who had a wide range of catering options, to suit even the fussiest of eaters.

THE DRESS & ACCESSORIES | Without a doubt this is the most important part of any wedding, so it had to be perfect. I happened to stumble across my perfect dress whilst walking down my local high street, after exhausting all the main wedding shops in Northamptonshire. It was at Camellia Bridal that I got introduced to ‘Delanie’ a Sottero and Midgley masterpiece. It was perfect for me and the complete opposite of anything I ever imagined I would wear. Accessories where minimal as the dress said it all, and the shoes were from good old Next. I’d decided to wear a wedge heel as didn’t want to spend the day sinking into the grass.

GROOM’S ATTIRE | Sean is a bit of a snob when it comes to suits and was determined to get something from Saville Row. Not sure where he found it in the end but found the most amazing slate grey velvet jacket, which he teamed with some simple black Hugo boss trousers and a black bow tie! His favourite colour, mustard had to feature somewhere in his outfit so it was my mission to find a pair of mustard socks-harder to find than you think.

THE READINGS & MUSIC | There was no question about having Nicole Hope play at the wedding. We first heard her play at a Grendon Lakes wedding fair, and instantly fell in love with her voice. She played three sets throughout the morning and it was simply perfect, everyone was mesmerised. The evening music was provided by ‘Blue Rinse’ a band from Luton who I heard playing at my sister’s wedding, there was no doubt that we would have them play. Everyone loved them and the dance floor was never empty.

BEAUTIFUL BRIDESMAIDS | My two sisters and my bestie were bridesmaids, I had three younger flower girls and my awesome nephew made for the cutest page boy. Dresses were a mix of sage green and daffodil yellow, with the page boy sporting a grey short suit with dickie bow.

THE FLOWERS | All done by our very talented Aunty, with flowers supplied by our local flower stall on the market. I was quite relaxed about what flowers, as knew my Aunty would do us proud.

THE CAKE | Made by our talented friend Catherine Helyar. It was not a fruit cake as we wouldn’t have eaten that, instead it was made up of several layers of different sponges, decorated with daffodils and a handmade super detailed cake topper. All tasted amazing.

YOUR PHOTOGRAPHER | We were lucky enough to have the very talented Aaron Storry, who’s photos I’d seen on Facebook. I instantly fell in love with his style. We are not a couple who like to pose and I have always been a fan of candid photography, so Aaron’s documentary style was exactly what we were after. The fact that Aaron is a super nice, down to earth person was just an added bonus. At first I was worried about having this stranger in my home whilst I was getting ready for the most important day of my life, where emotions would be high and nerves abundant. Aaron came, we had a quick hello and then he was off! Capturing all those raw emotions, the laughter, the tears, the nerves, the drinking!! He was so easy going and we hit it off straight away, made Sean and I feel completely at ease. And the photos! Well they speak for themselves, quite literally award winning. He did us so proud, we cannot thank him enough.

THE DETAILS & DÉCOR | Simple décor, as the venue is beautiful already. Plenty of fairy lights and a massive Nearyfest sign, made by another talented friend of ours.

THE HONEYMOON | New Zealand for the skiing, and then Hawaii for the sun. Three weeks of pure bliss!!

MEMORABLE MOMENTS | Four days before the wedding our evening fish and chip caterer had to cancel! Major panic as we were super excited to have a fish and chip van, a few fraught phone calls later and KK Catering saved the day.

Sean’s Uncle drove me to the venue in his VW camper, it started to stall a few times on route, we laugh about it now but I was cursing him the whole way.

ADVICE FOR OTHER COUPLES | Just chill and enjoy the most amazing day of your lives. Let others do the panicking for you and if something doesn’t go to plan then let the best men deal with it. What will be will be!