Today’s couple really thought outside of the box when it came to planning their nuptials. They approached the wedding planning with a ‘party’ ethos and wanted all of their guests to have fun whilst being true to themselves as a couple. Perfect.

WWW readers Rachel and Jon were married on the 22nd April 2016 and had a registry office ceremony the day before. It meant that friends could officiate their wedding ceremony on the day to make it super personal, meaningful and full of joy. In fact in every image taken by September Pictures, all I can see is radiant smiles and laughter, it looked as though everyone had a real blast. It’s not really any wonder when there was live music, DJ sets, incredible food and an espresso martini hour, which lasted all night.

Most of the decoration was hand crafted, including origami winged heart place settings, a super cool neon sign and a peg board table plan. Then there was the festoon lighting, which really looked magical draped over the hall. 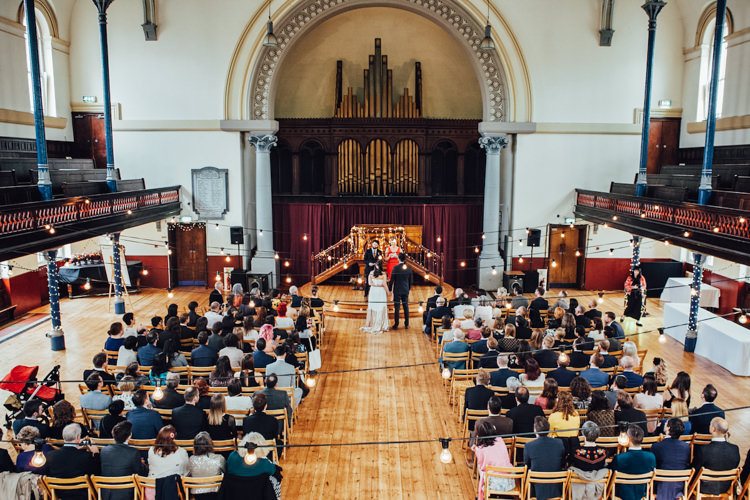 THE PROPOSAL | By Gullfoss waterfall in Iceland, in the snow.

THE VISION | We wanted a big party with all our friends – we wanted everyone to feel involved and enjoy themselves while still keeping it about us as a couple.

THE PLANNING PROCESS | We had a year and a half, and after we’d sorted out the venue I had about six months of planning and research before we really got going on making decisions and booking stuff. I looked at pinterest and lots of blogs and then it was a case of trying to take everything I’d seen and make it work for us – I didn’t want it to end up looking like pinterest threw up on our wedding.

THE VENUE | The Round Chapel in Clapton. We use to live very close to it and it’s a beautiful building – we saw a few other places but it was clear as soon as we went there that it was the one. The capacity is about 450 – way more people than we know – and I was initially worried that it would feel cavernous, but it was perfect – we used lighting to make it feel like an intimate space. Jon decorated the venue so I didn’t see it in all its glory until I walked down the aisle – he made it look beautiful. We also used one of the rooms of the church next door, which has an adjoining door, so we could set up the main room between the ceremony and the evening.

THE DRESS & ACCESSORIES | I absolutely hated dress shopping – nothing was in my size and nothing felt right. Things I did like, I couldn’t afford, so in the end I bought a plain dress from Debenhams and asked a friend to customise it for me with sequinned fabric. Because the dress was so cheap I felt quite relaxed about it, and I loved how it turned out. I wore a necklace that my mum wore on her wedding day, which I had gold plated and made myself a hairpiece out of silk flowers. It had some little trinkets wired into it that were meaningful. I made my perfect shoes on shoesofprey.com.

GROOM’S ATTIRE | Jon had a navy suit custom made by Beggars Run.

THE READINGS & MUSIC | We had two readings – one of which (Love, by Roy Croft) was performed with great ceremony from the pulpit!

The other was slightly adapted from Rollercoaster by Lang Leav (we just changed a few pronouns). Jon is extremely tall, so it seemed apt!

You will find him in
her highs and lows;
in her mind,
he’ll to and fro.

He’s the tallest person,
that she knows –
and so he keeps her,
on her toes.

I walked down the aisle to Are You With Me Now by Cate Le Bon. Our first dance was to I Wanna Be With You Everywhere by Fleetwood Mac. We had four friends DJ throughout the night who were brilliant. We also had a mariachi band playing for an hour, and they learned some songs just for us (including Africa by Toto, which was perfect).

BEAUTIFUL BRIDESMAIDS | I had six and they were brilliant. I just told them to find a dress they liked in Navy, and they all chose something quite different! I made them matching earrings and flower hair clips, and bought them gold name necklaces.

Jon had three best men who gave the greatest best man speech in the history of weddings.

THE FLOWERS | I was so lucky to have the legendary Judith Blacklock do my flowers for me. I used to work at her flower school a long time ago so had some pretty specific ideas – it was such an honour to have her make all my wedding flower dreams come true. I had ranunculus in pinks and oranges mixed with pink waxflower in the bouquets and in pink glass vases on the tables.

THE CAKE | We didn’t have one, but we had éclairs. They were made by Alice at The End of the Éclair, who sometimes has a stall on Chatsworth Road market. They’re INCREDIBLE.

YOUR PHOTOGRAPHER | The wonderful Rachel and Chris of September Pictures. They’re friends of friends so they knew a few people at the wedding – somehow I feel that lends even more warmth to their photos. They really put us at ease and made us laugh, and they were unobtrusive when they needed to be.

We also had a photobooth – the photos are hilarious.

THE FOOD AND DRINK | We had pizza delivered from Yardsale Pizza, which is just over the road from the venue. Canapés and salads were provided by Canababes, who also coordinated everything – an absolute lifesaver in a dry venue!

As a wedding present our friends Ade and Steve helped Jon brew his own beer – we had Wed Stripe and London Bride! After desert we had an espresso martini hour, which lasted for the rest of the night . . .

At about 9pm we had a delivery of pretzel bites from Mr Pretzel, which lasted about five seconds.

THE DETAILS & DÉCOR | Because we had so long to plan I was able to make a lot of stuff myself. I made origami winged hearts for each place setting and every table had a guest book where people could leave us a message for the anniversary year that corresponded with the table number – we’ll read them on our anniversary every year. For the table plan we bought a massive peg board – it ended up being an expensive way of doing it because I kept running out of vowels and having to buy new letter sets, but it looked really cool and meant we could change things right up until the last minute. We also gave people paper and felt tips and asked them to draw a self-portrait during dinner – we collected them all up and plan to make one of those tea towels you used to get when you were at school to send as a thank you.

My favourite thing was the neon sign made for us by one of the best men – it said SOLID GOLD LOVE on it and we hadn’t seen it before the day – it was such a beautiful thing.

THE HONEYMOON | We’re going to Sri Lanka for two weeks in mid-august.

MEMORABLE MOMENTS | Because we’d done the legal bit the day before, we asked a couple of friends to officiate on the day. We didn’t know what they were going to say, and had just given them a few pointers, which meant that it was all a wonderful surprise and felt like we were completely surrounded by people we loved.

ADVICE FOR OTHER COUPLES | Sort out the things you each feel strongly about early on, and keep bringing it back to what you want. We were lucky that no one really tried to impose their ideas on us, but we did find ourselves thinking too much about the guests and not enough about ourselves at points. Once we got over that, it was easy!

Canapés and on the day coordination | Canababes

Éclairs | The End Of The Éclair

Wow, what a party!