We have some truly beautiful wedding inspiration to share with you today, which was inspired by Greek Mythology. These images and accompanying film are dreamy, ethereal and oh so romantic. There were the most decadent florals; with a bountiful bouquet and a moongate flower arch backdrop, which was adorned with greenery, willow, Dahlias and trailing Amaranthus. The results are just breathtaking!

Another highlight of this editorial shoot for me has to be the luxe cake table with the artistic brush stroke cake, it really is stunning. The cake, along with delicate watercolour calligraphy stationery, gorgeous styling, exquisite jewellery, stylish attire and flawless bridal hair and beauty, really create a set of wedding ideas sure to inspire today. Thanks so much to Apple and Bramble Events and Fleur Provocateur for sharing with us their creative vision.

On hand to capture all was Katherine Newman Photography, with Dhw Photography shooting the sublime water portraits and Skynique creating the film below. Enjoy.

Being in the wedding industry surrounded by love and romance makes you forever daydreaming about love stories told and stories to come. I am forever inspired to retell the stories that have captivated me.

I am obsessed with Greek Mythology and thought it was time to tackled my imagination and created an interpretation of Persephone and Hades. Looking through a Pre-Raphaelite lens on the Greek myth of Persephone and Hades; this collaboration, styled and conceived by Beth of Apple and Bramble Events and Caroline from Fleur Provocateur, presents the story of love and abduction in vivid and rich textures and colours.

Already inspired by the work of Millais and Rossetti, and enthralled by the Greek mythology, the search for a venue began. Forde Abbey was the most fitting backdrop, complete with beautiful lakes, fountains, classical Greek follies and impeccable gardens. In the essence of opportunism, overlooking the water scene, is a statue of Leda being seduced by Zeus, under the guise of a swan. In partnership with luxury floral designer, Caroline at Fleur Provocateur, a colour palette reminiscent of the Romantics was developed. Using a principal apricot rose, aptly named ‘Romantic Antike’, velvet chocolate cosmos, and the darkest of dahlias. The lightest touch of turquoise Oxypetalum was incorporated to complement tones of the dress and Silver Cake’s stunning creation. The large and relaxed bouquet consisted of large cabbage roses, black-red Baccara, maroon dahlias, eucalyptus, populus, and dancing heads of sanguisorba. Plunged into the Underworld, through a moongate of amaranthus tendrils, contorted willow, and deep burgundy dahlias, Persephone falls in love with Hades. According to the myth, Demeter, Persephone’s mother and Goddess of the harvest, was devastated when Persephone moved to live in the underworld, she scorched the Earth into a period of infertility: Winter. When Persephone would return to Earth for six months, fertility would return creating Summer.

The symbol of Persephone is a pomegranate, Something we wanted to feature throughout the shoot. Within the tablescape, we used a combination of distressed gilt candlesticks, medieval pewter chalices, and mixed glasses in shades of blue. These different textures provided depth, and contrasted with the beautiful hamstone of the Abbey. The Silver Cake created a beautifully textured cake that encompassed the rich colours and textures of the brief. Bea was able to create a painterly effect on the cake which brought the tablescape together in a poetic and romantic style. Along with opulent fruits dusted with gold and flower heads came the stationery. The stationery created by Beth for Flick and Flourish was adorned with gold and watercolour motifs. The stationery was used as a way to tell the story of this Greek Romance at a greater depth. Beth was inspired by the poem Hades by Cecilia Woloch.

The poem was handwritten in calligraphy on a perspex circular disc which was placed in the ponds, bringing the poetry to the water and submersing the words into the depths of the underworld. The stationery suite has Greek symbols within it in gold representing Hades and Persephone. These slight hints and flecks of information make the editorial a story being told. 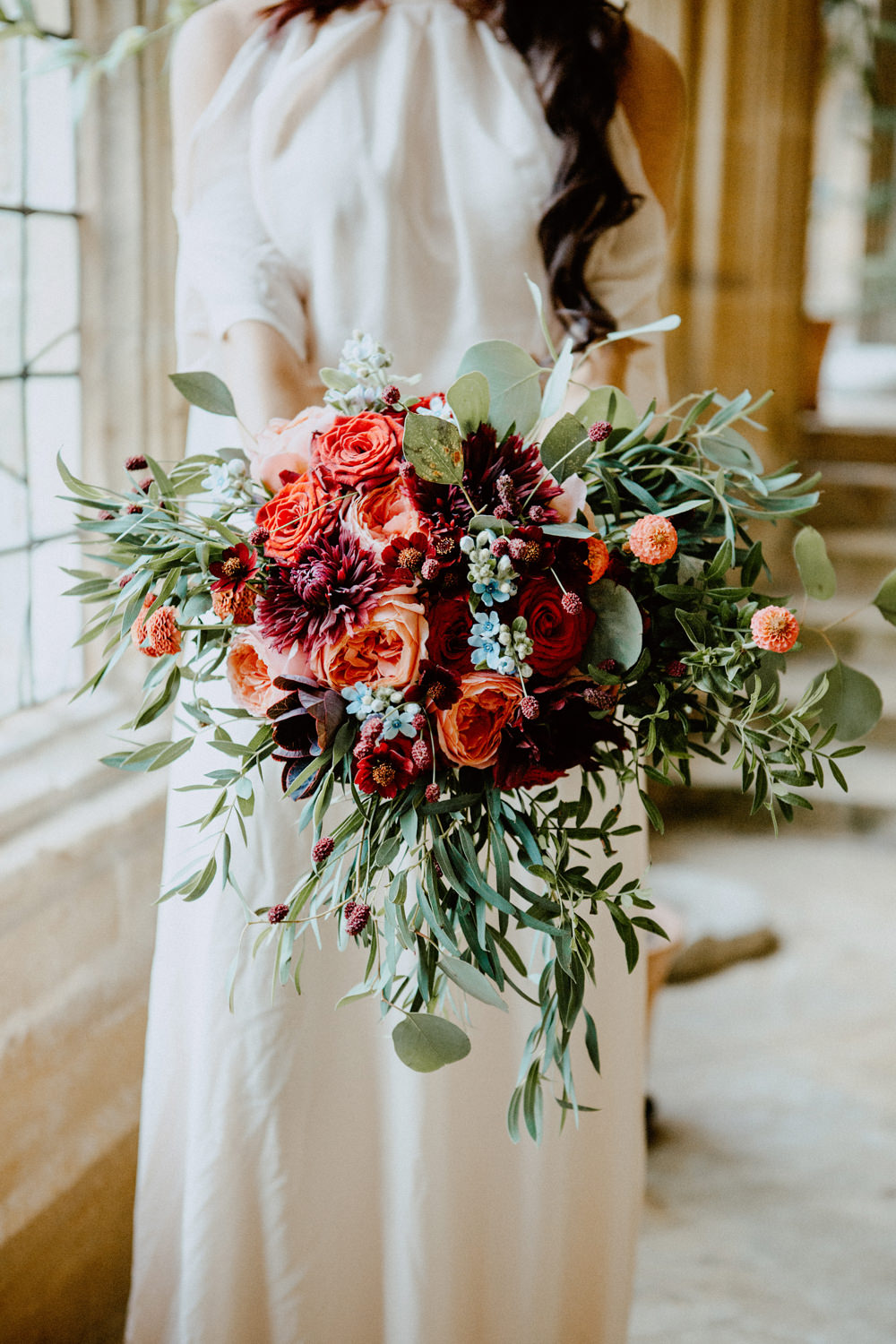 Katherine Newman captured beautiful and romantic moments unseen by the naked eye and used the brief to create images that will make you swoon and feel drawn into this mysterious tale of love and another world.

We had two photographers on the shoot which worked incredibly well. Daniel Weeks work is dramatic and full of moody emotive subjects. Daniel took the most breath taking images of the models in the water and used the elements to create an other worldly feel.

We were lucky enough to use one of the highest water fountains in Europe for this editorial and wow did it create a magical backdrop.

The editorial we created left us all feeling like we had fallen into the depths of another world. The setting and elements created this beautiful atmosphere creating in my eyes a visual of these words by Cecelia Woloch:

There are no bodies here,
we dream shapeless dreams–
a constant, cloudless storm. 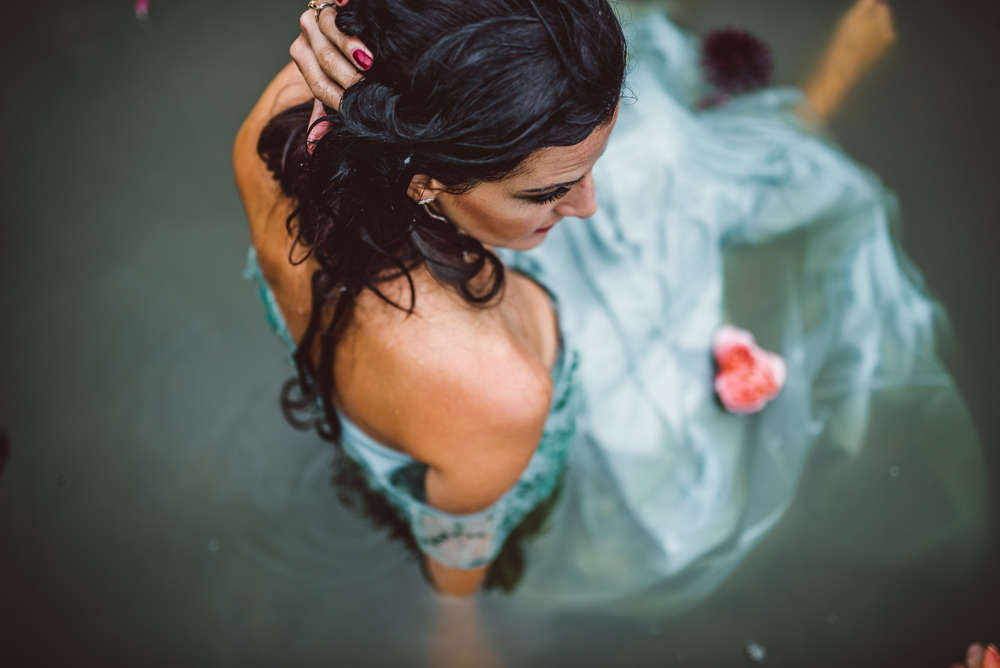