Ready for a riot of colour, oodles of love and a gorgeous story? Me too, after all it is a Friday in mid January and we certainly deserve a treat!

WWW readers Rishi and Jennifer were married on the 8th July 2017 at Thrumpton Hall in Nottinghamshire. They had a day of two halves, but perfectly and seamlessly blended into one. The first part of their day had an English country garden feel and the second part an Indian party. All in glorious rainbow colours and filled with beautiful touches and styling.

Think marquee adorned with streamers and lanterns, brighter than bright florals teamed with succulents and divine sweet treats. In fact food was their top priority and they then allocated their budget accordingly. Jennifer wore two gorgeous gowns, Rishi wore two outfits and in fact so did the entire bridal party. They all looked so splendid too. I think you will really enjoy viewing their outdoor ceremony and the following celebrations, all captured just perfectly by Maytree Photography; thanks Danni! 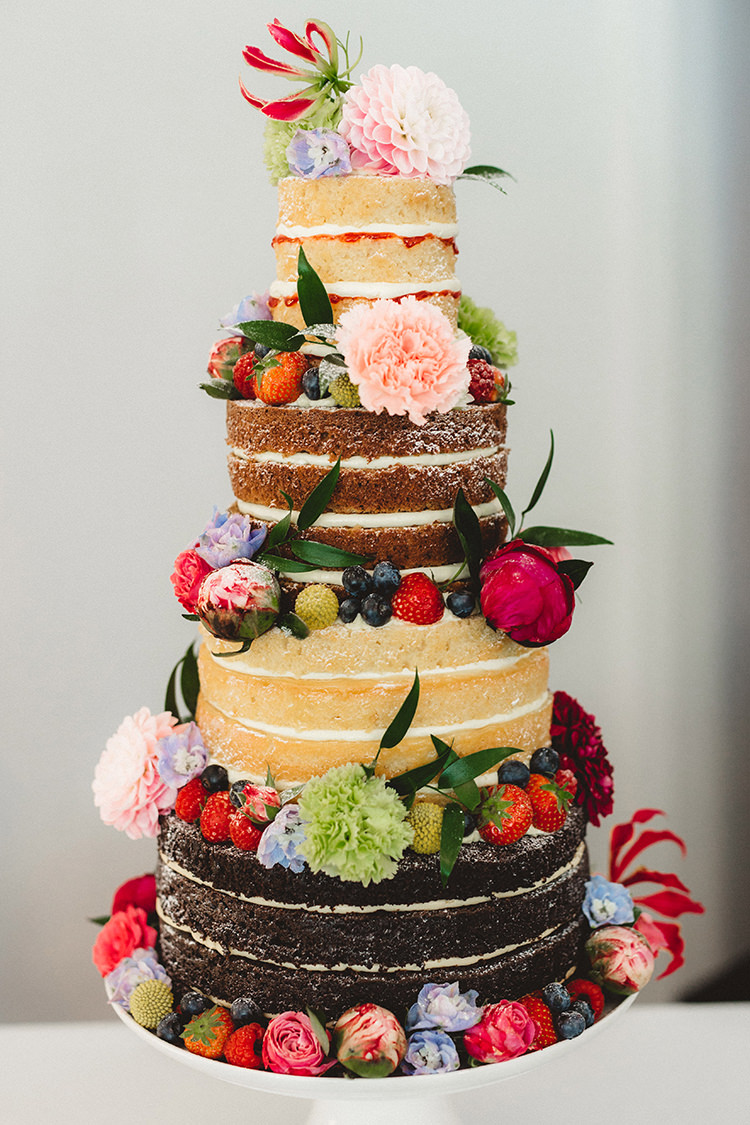 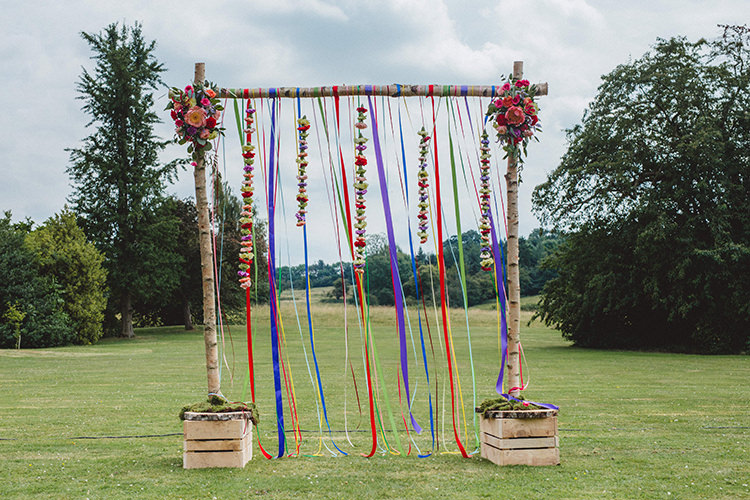 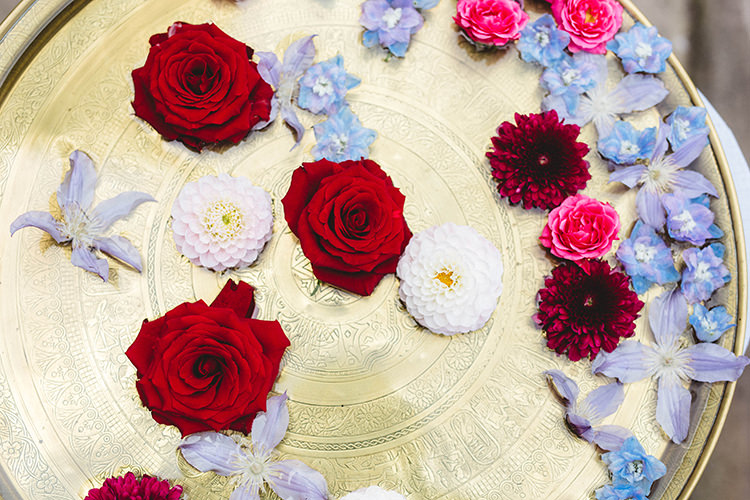 THE PROPOSAL | We went on holiday to Croatia in May 2016. Rishi planned the perfect day island hopping and drinking wine. At the end of the day Rishi got down on one knee on our balcony overlooking the old town in Dubrovnik.

THE VISION | As we were having an English-Indian fusion wedding we wanted it to be colourful but without being too garishly bright. We had lots of conversations with our decorator and florist who understood what we wanted straight away.

THE PLANNING PROCESS | As accountants it would have been wrong not to use a few spreadsheets! Our main priority was to ensure our guests ate amazing food, so this was top of the list when it came to allocating budget. After picking the venue, a decorator, photographer and live band followed. We planned on and off for a year but enough free weekends to not get completely consumed by wedding planning.

BUDGET | We definitely splurged on food and drink (after all this is one of the things we always remember from weddings!) We initially discussed have two separate English and Indian events but thought it would be more fun to mix it up in one day – this meant we saved some money and made sure that the 8th July was perfect!

THE VENUE | Thrumpton Hall has a lot of character, lots of different rooms with interesting features and great photo opportunities inside and out. Location was great for both our families (mostly living in Nottingham and Lincoln). The venue made it easy for a bad weather plan B. We first saw the venue exactly a year before our wedding in July in torrential rain and we still fell in love with it.

THE DRESS & ACCESSORIES | I was lucky enough to wear two outfits in one day! For my English dress I ended up buying the first dress I tried on! I got it from a shop in Lincoln (Welbet Bridal) and the dress was Essense of Australia.  My shoes were from Marks and Spencer (tried and tested – knew they would be comfortable all day!) and my accessories were a present from Rishis grandparents.

Trying on Indian dresses was one  of the highlights of my wedding preparation. I went with Rishis mum, grandma, sisters, aunties and cousins. We went round the shops in Southall, London; it was so fun trying on all the different (heavy!) dresses! Red and bright colours don’t really suit me, I had seen some lenghas on pinterest, which were lavender. In a shop called Omega I found a full bodied lengha in lilac and as soon as I tried it on I knew it was the one!

GROOM’S ATTIRE | The suit was between Hugo Boss and Ted Baker but the personalized service and the great fit I got in Hugo Boss was the winning combination. The Indian outfit was also from Southall, London. I didn’t want anything too heavy as I had suspicions it was going to be a hot day!

THE READINGS & MUSIC | During the day we had a live band called Up the Tempo (we hired these through Alive Network). They played the first set after the ceremony in the gardens whilst everyone was eating. Their second set was after the first dance to get everyone on the dancefloor. They were so easy to deal with and we’ve heard endless compliments from our guests.

Our Indian DJ was NuSoundz based in the Birmingham area. He played a great mix of English and Indian songs and even combined the two! With the DJ we also had a dhol player who played our entrance into the pavilion and also joined in on the dancefloor (who knew YMCA could sound so good with a bhangra beat!).

BEAUTIFUL BRIDESMAIDS | The bridesmaids also got to wear two dresses! The first dresses were from Quiz; a really great, flattering shape for them all. They then all got to choose their own Indian outfits; the different bright colours made the photos look amazing.

THE FLOWERS | Again, we wanted colourful but I wanted to mute them with succulents (my favourites). When I first saw my bouquet I cried it was so beautiful.

THE CAKE | Our wedding cake was by Ruddington Bakery based in Nottinghamshire. After seeing lots of naked cakes on Pinterest I knew I wanted one! We had different flavour layers and the cake was decorated with fresh flowers from our florist.

YOUR PHOTOGRAPHER | After scrolling through countless blogs; I short-listed photographers based on the style of the photos. I then got in contact with Danni and loved her enthusiasm for the fusion wedding. She had great ideas and responded to everything super quickly and made us both feel at ease.

THE DETAILS & DÉCOR | We had a mix of English and Indian decorations. On the tables we had a mix-match of different colour and size vases with simple flowers. We had a ribbon backdrop, which we used on behind the top table and behind our ceremony in the morning. There were colourful ribbon streamers to decorate the pavilion.

THE HONEYMOON | It was a complete surprise until I got to the airport where Rishi had done a quiz where it spelt out our first destination. We started off in Seminyak, Bali for some much needed relaxation with our own pool and afternoon tea and massages everyday! The honeymoon then took a surprise turn when we got a boat to the island of Lombok. It was here I realised why I need to pack hiking boots, a fleece and a head torch. We did a 3D2N trek up Mt Rinjani, staying in tents 3,000m above sea level. Although really challenging and not your traditional honeymoon, this was probably my highlight! Back on to Bali we stayed in quirky Ubud for some culture, with an infinity pool overlooking the rainforest. Next stop was Ko Samet in Thailand for white beaches, clear waters and more massages. Last stop was reminiscing in the hustle and bustle of Bangkok (we had previously travelled here in 2012!).

MEMORABLE MOMENTS | Highlight of the day was seeing all our family and friends jumping around on the dance floor. Another was being introduced into the pavilion with the dhol player, with people seeing us in our Indian outfits for the first time. To add one more Prosecco and Pimms in the garden, live band playing, Indian food at the ready with the sun shining; what more could a couple wish for!

ADVICE FOR OTHER COUPLES | Don’t just get a photobooth in the evening; we got some lovely photos by having it in the day!

We had a very detailed time line of the day with a few different scenarios; although it sounds over the top it made sure the day worked like clockwork. This meant all our suppliers knew exactly what was going on so we didn’t have to worry about things staying on track. This was particularly important as we had planned two weddings in one day.

Make planning as fun as possible; don’t turn it into a chore and do too much at once.

Try and get invitations sorted early on, even if you don’t plan on sending them out until later.

Try not to stress out too much about things out of your control e.g. the weather. We just made sure we had a plan A and a plan B.

Well wasn’t that just gorgeous and so fun too!

Rishi and Jennifer, thanks ever so much for sharing your bright beautiful day with us xo Lou