I am going to begin today’s real wedding feature with the words that were used by WWW readers Kirsty and Dan to describe their wedding day;

Unique, memorable, thrilling, characteristic and distinctive. It was all about us and the things and people we love.

I think that really sounds fabulous and a brilliant day was had by the looks of it, which was all held on the 4th May 2019 at The Ironworks at Elsecar Heritage Centre in Yorkshire. The warehouse wedding venue was just spectacular and it had the flexibility that Kirsty and Dan were after, they even had a steam train ride after their ceremony for a spot of extra fun. Being musicians in their spare time, music was key to their day and they had an array of incredible live acts to entertain throughout. It must have created such a wonderful atmosphere.

I really love the subtle yellows and blues used in the attire, flowers and stationery, it worked perfectly. Kirsty looked stunning in a tea length lace gown and veil, while Dan was suited and booted in blue tweed. So stylish. Also be sure to look out for a really amazing confetti moment! Huge thanks goes to the fantastic Ayesha Photography for sharing these utterly gorgeous captures with us. 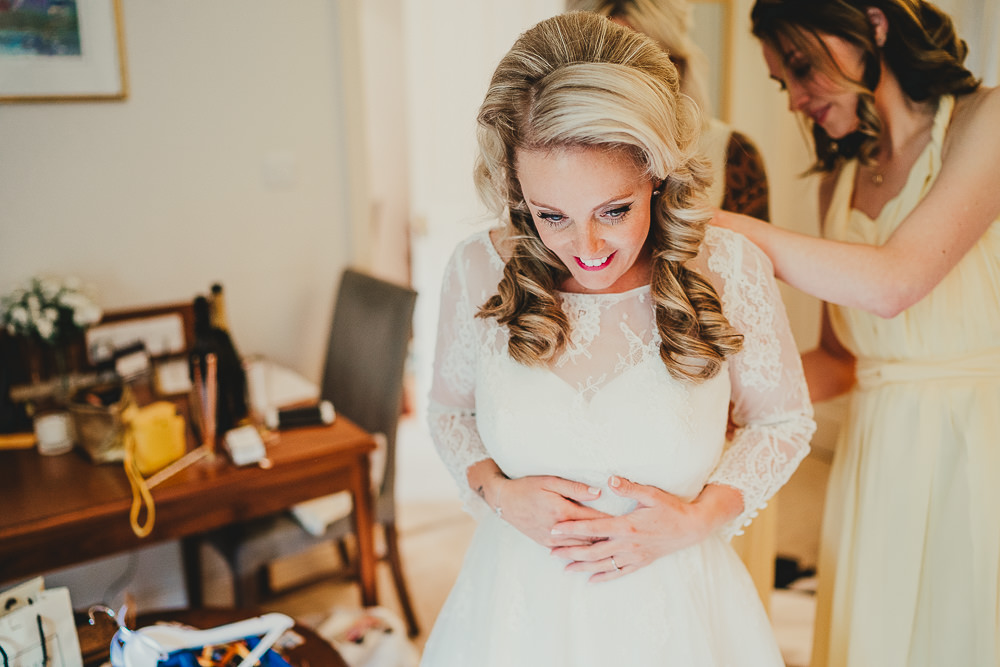 The original intention was for the proposal to take place in Seville, in January 2018. Dan had booked the trip and had the ring handmade by a wonderful local jewellers- William & Julia Shaw’s, Dodworth. A sapphire surrounded by diamonds in a platinum setting. He had lined up a romantic scenario to propose in the Plaza de España followed by a flamenco show and celebratory meal at the acclaimed ‘Restaurante Ispal’. However, 2 months before the trip, we went to a pub quiz with some friends in Sheffield and had a great night, which included a few beverages, the ring had literally been burning a hole in Dan’s pocket and he just got down on one knee right there in the living room! I said yes, on the condition we still had the official proposal trip, and yes, he did get down on one knee again at the plaza!

We had a brilliant engagement party at Trippets gin and jazz club in Sheffield with our nearest and dearest. We served canapes and gin cocktails and had live jazz music. 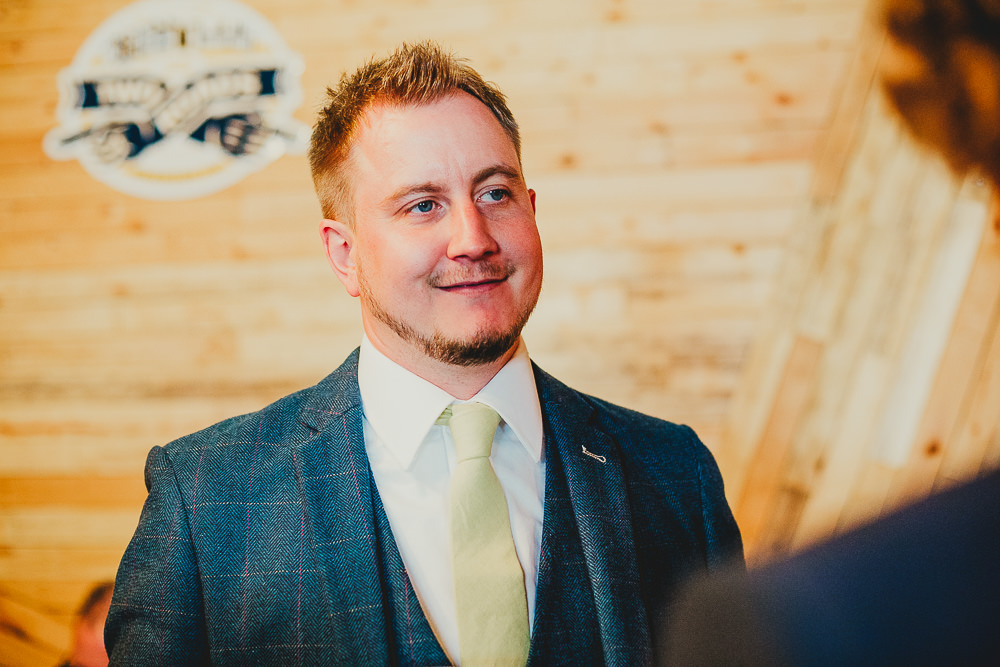 From the beginning we knew we wanted something a bit different and unconventional. We wanted to be able to invite as many people as we liked (within reason) without the worry of the huge cost per head involved in package weddings. We wanted our wedding to be rustic, a little bit urban but most of all very fun and entertaining! We are both keen musicians in our spare time so the entertainment was important to us. We’d settled down together in Yorkshire and chosen a venue near to our home and as we had guests coming from all over the country and indeed the world we thought it would be nice to have a Yorkshire theme also when it came to décor and stationery etc.

We are both people who generally make decisions quite easily. We didn’t need to see dozens of venues, samples or shades of blue to know what we wanted. We did, however, realise early on that we would need help in the logistics and creative processes of achieving our dream wedding and that’s where Ellie from Inner City weddings came in. As our co-ordinator, she was worth her weight in gold. She specialises in urban/warehouse DIY weddings and put us in contact with some incredible indie vendors. She was there to guide and advise us every step of the way and we are so grateful to her.

Originally we had hoped to keep it under £20,000, however we possibly got a bit carried away and ended up a little over at approx. £22,000. We don’t regret a penny and were just blown away by the amount of work and artistry all our vendors put into making our day so special.

We chose The Iron Works at Elsecar Heritage Centre as we could just see so much potential in it. It had the urban warehouse feel we were going for but also cultural and historical value, in an area close to our hearts. The beautiful Victorian warehouse itself is big enough for up to 900 guests! Well obviously we don’t even know that many people but we could see so many ways we could use the space and put our stamp on it.

Dan got his and the groomsmen suits from Tweed & Groom at Elsecar Heritage Centre. They are by Marc Darcy – Dion Blue Vintage Tweed three piece suits and Cavani tan shoes. He accessorised with a daffodil yellow James Alexander linen tie and I bought him a pocket watch.

I got my dress from The White Yard, also based at Elsecar and next door to Tweed and Groom! The third dress I tried on was the one I chose. It’s a Louise Bentley tea length lace dress. I am quite short and I just loved that it didn’t drown me and I felt so comfortable and glamorous! My Veil was from Rainbow club and my designer Leann embellished it with some Swarovski crystals and some of my mum’s pearls.

My shoes were from Rachel Simpson and were not only stunning but also very comfy!

Kim from Kim’s Occasion hair styled mine and my bridesmaid’s hair – we all went for soft and natural half up half down do’s and Emmalene Beck did our make up for us, again we went for pretty and natural apart from my bright pink Dior lipstick in shade ‘sassy’!

During the ceremony we had two readings: Sonnet 18 by William Shakespeare, read by our good friend Katy Coyle. We also had our own interpretation of A Lovely Love Story by Edward Monkton, read by Kirsty’s cousin Nick Holden. During the signing of the register, our Sister-in-Law Kelly Marsh sang ‘The Story’ by Leann Rimes.

As we exited the ceremony, we had the Sheffield Pipe Band perform some numbers on bagpipes and drums. We chose them as a nod to my Scottish heritage and also for the fact that Sheffield is the only city in England which has its own tartan and we liked the amalgamation of these two things. We then had a violinist by the name of Arjay to perform during our drinks reception on the steam train, which we hired to take our guests on a ride!

Following the speeches, Kelly reprised her singing role in a “flash mob” style musical theatre performance, alongside her friend Matt Jayes. They performed three songs before the cutting of the cake.

Finally, our evening celebrations kicked off with some live music by the Just 80’s Band, performing a selection of 80’s bangers that really got the crowd going – as well as an incredible rendition of Living on a Prayer by Bon Jovi that invited audience participation!

Tracey from Campbell’s flowers, Kelham Island worked tirelessly on our masterful floral creations! One of the big challenges was a giant hoop of foliage hanging from the ceiling which helped create our rustic look. She also made us an amazing alter and aisle runners using blue and yellow wild flowers and lanterns. In addition, Debbie from Trippets, Sheffield donated dozens of empty gin bottles which we used to put fairly lights and wild flowers in for our table arrangements. The bridal party bouquets also consisted of rustic blue and yellow wild flowers and the junior bridesmaid/flower girls had matching flower crowns and flower wands to carry which they loved!

Sara Percevicius from The Bake Lab provided our wonderful cake and dessert table which included two tiers of lemon drizzle cake topped with wild flowers and a selection of macarons, brownies and various other delicious treats. We served this for dessert so nothing got wasted.

We had festoons and our giant hoop of foliage hanging from the ceiling, Yorkshire slang posters on the wall and I made some giant photo boards to accompany the dessert and gifts table. As Dan is a drummer, we had a Tambora drum, which we had our guests sign as our guest book and this is now hanging on the wall in our living room. We also used a bass drum as our cards post box and decorated it with lace. As we had so much space, we hired lounges including large leather chesterfield sofas and barrel coffee tables to create a chill out area near the bar. 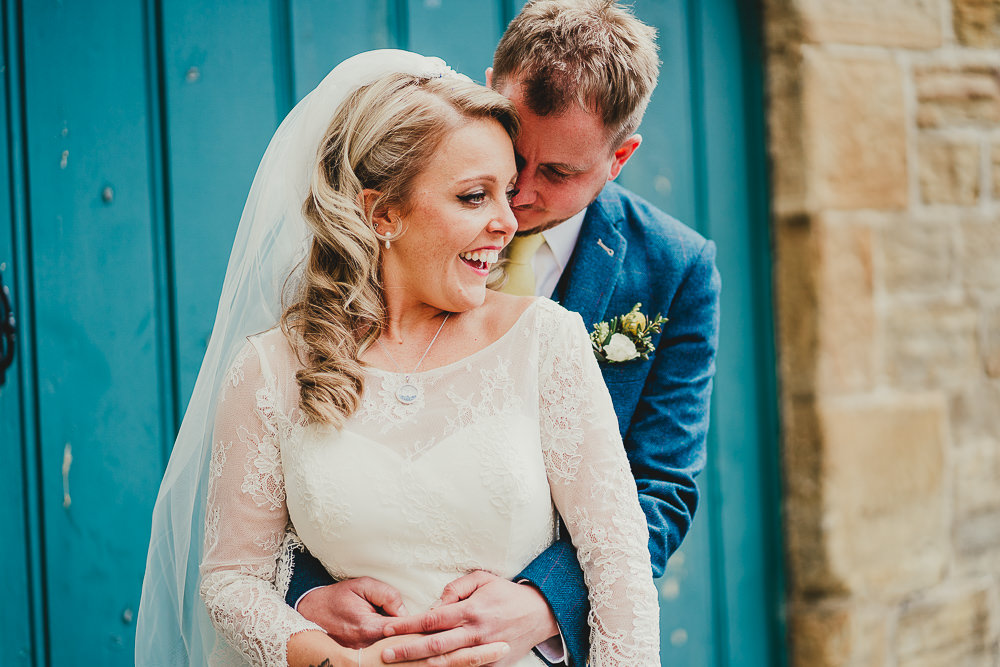 We had the most wonderful and talented wedding photographer we could have asked for. When we met Ayesha, we instantly knew she was ‘the one’ because she just made us laugh and smile and put us at ease and that’s exactly how she was with us and our guests on the day. We wanted mostly candid, caught in the moment photography and boy did she deliver. In addition to her beautiful photos, she also did a highlights video for us in her own entertaining and unique style. She captured every moment of our wedding perfectly. 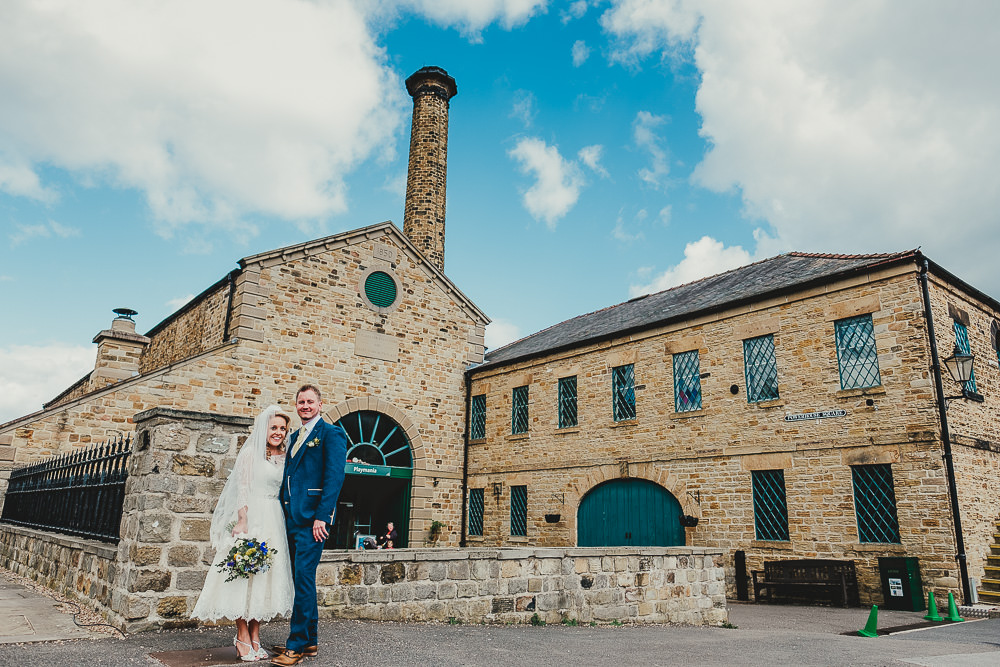 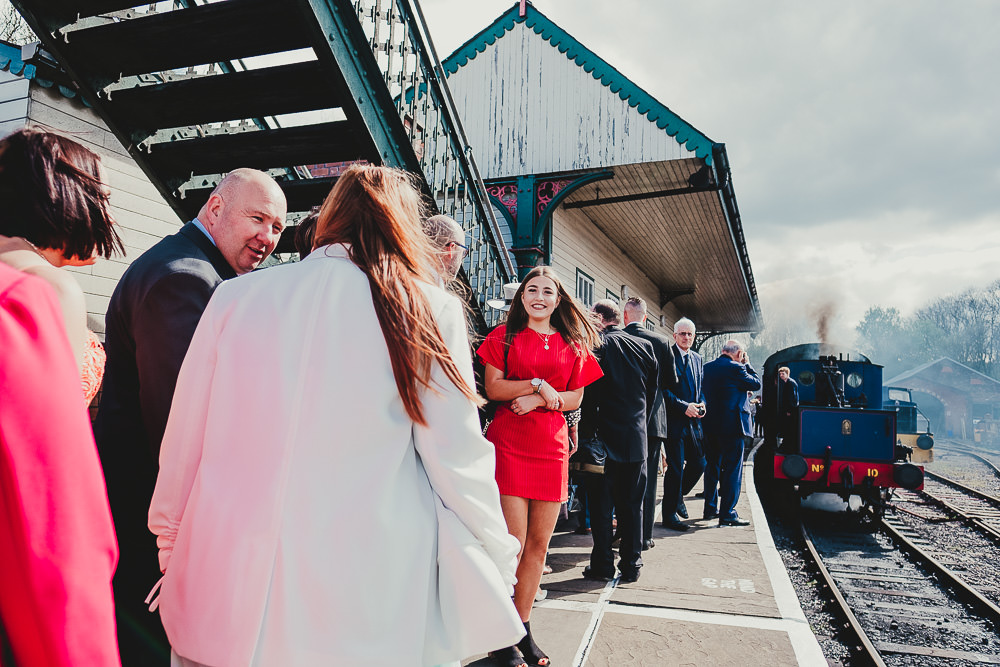 We had an amazing “mini-moon” to New York City – 4 nights staying in the iconic Renaissance hotel, Times Square. During our stay, we went to the top of the Empire State Building, went to see the Lion King on Broadway, had breakfast at Tiffany’s and shopped till we dropped! We now need a relaxing beach holiday just to get over it all!

Mostly the weather was pretty good on the day, however, at the exact moment I arrived at the ceremony, it decided to start hailing! Luckily Ellie and her helpers were there to greet me and the bridesmaids with large white sheets to protect us as we walked to the venue! The photos we got of this are brilliant! We also loved the steam train ride. Our guests have raved about this part and said it helped make the day very memorable! One of my absolute favourite moments of the entire day was during our first dance. We had our band play the song Only You by Yazoo and after the first verse, 10 of our friends fired off confetti canons and then everyone else joined us on the dance floor. It was completely magical! 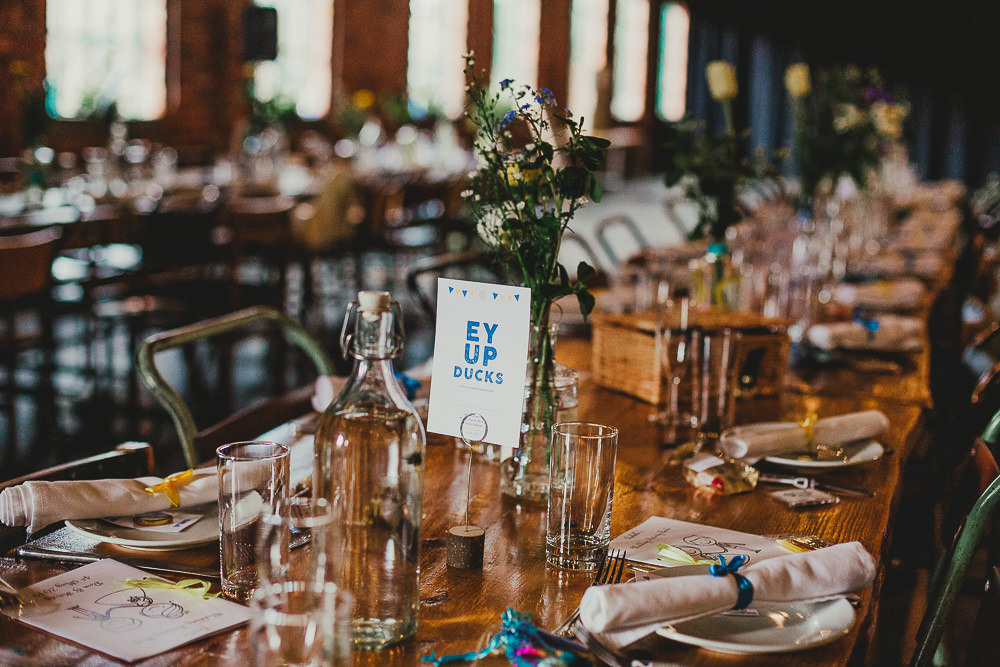 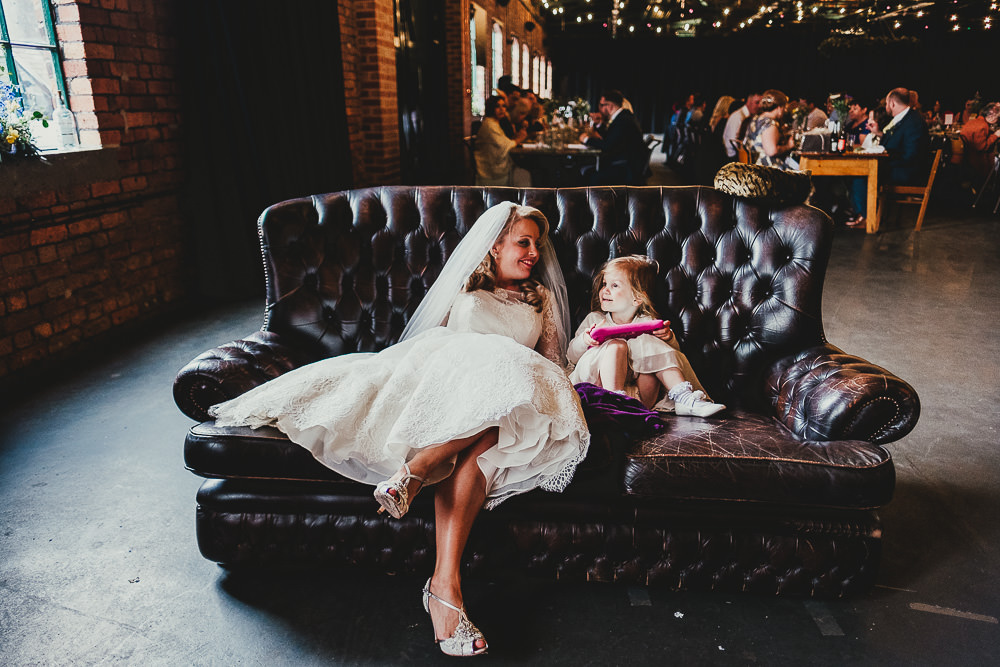 When it came to choosing my four adult bridesmaid and five junior bridemaids/flower girls dresses, I had a challenge on my hands as one of my bridesmaids lives in Australia, another lives in Cyprus and my Maid of honour fell pregnant with my twin nephews at the time of choosing! In the end we all agreed on infinity style dresses for the adults from an online company called That Special Day. The girls were able to style the dresses how they wanted so they all looked unique and fabulous! I was then able to perfectly match the colours for my five flower girls dresses from a company called Happy Rose who I found on Amazon. 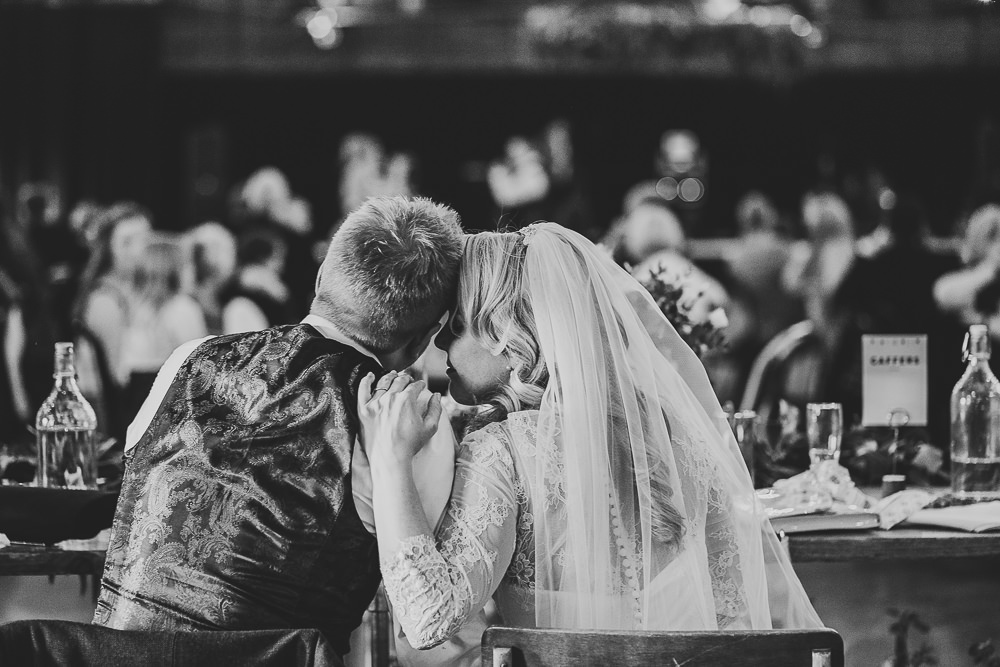 Everything everyone tells you is true! You really don’t worry about the little details on the day and if anything doesn’t go to plan, it really won’t matter. Try to take some time out, just the two of you to take a walk and take it all in. You will be so glad you did. Also selfie sticks on the table make for some great photos and definitely get confetti canons for the first dance!