This disco wedding ideas shoot is giving me all the happy vibes. What’s not to love about a cool streamer backdrop, smoke bombs and sequins all set at the awesome The Canary Shed.

Jump the Broom was behind the fun concept and coordination, while Lex Fleming Photo captured these immense shots. We have a super loved up couple dressed in quite frankly spectacular attire, funky stationery and holographic flowers galore. I really love how the day turns to night with a full-on disco, atmospheric lighting and confetti cannon. Do also look out for a gorgeous cake, fun accessories and a fantastic table set up.

Such an uplifting, joy filled and happy shoot. YES.

As a rural venue with a distinctly industrial and urban feel, creating a concept for The Canary Shed meant I needed to find a balance that worked between the two. I knew I wanted it to have a retro/bohemian vibe whilst also still being really modern, bold and colourful to match up to the incredible bird ceiling which is a permanent fixture in the space.

Lex’s images are always full of so much colour and style that I wanted to capitalise on that with the sets we created.

Working off a bright pink and orange palette with softer tones of lilac and blue meant our supplier team could have some fun with their creations, from the holographic florals from Iris and Co to the colourful streamer backdrop by Streamadelica, the kitsch wedding cake by Dee’s Basement to the feather tassel stationery from With Bells On and dramatic hair and makeup by Powder Blue Artistry.

A special mention also has to go to our bonus models – the adorable dogs the team had in tow!

We wanted to really encapsulate that party vibe with foil confetti cannons, smoke bombs and a second look in sequin outfits, to go from a softer, more floral ceremony and reception to an all-out disco to round it off!

It was a lot of fun to pull together and I think the overall concept came together perfectly to deliver a countryside barn with a big vibrant twist.

When I stumbled upon the people that own what is now called The Canary Shed, I could already envision the first styled shoot there. The moment I saw the barn coming together and all those birds being hung, I knew I wanted to include them in as many of the photos as possible, as the whole ceiling is so unique and colourful.

Working with Kate from Jump The Broom and Emily from The Canary Shed is always a dream. We are always on the same page and get as excited by the little touches as each other. The concept came together quickly and effortlessly and each supplier played such a valuable part in the overall images.

I wanted the photographs from this shoot to really reflect how diverse the whole wedding venue and its space can be. Using different lighting techniques, from using flash to using the pink glows of the bar’s neon I wanted to make sure the full atmosphere was captured.

Finding a venue that lets you use confetti cannons AND smoke bombs is always exciting so we made sure to capture both and really showcase the party vibes of the shoot, the couple and the venue.

Table Setup & Styling
Your Plates or Mine

Shoot Assistant
My Oh My Weddings

Stationery
With Bells On!

I can’t thank the creative team above enough for sharing these sensational disco wedding ideas.

What a great month it’s been. There has been so much beauty shared on WWW and what a delight it was to share! It’s been super busy on my end. We had a lovely half term out of the office with our little boys where we packed in lots of fun. We had a day […] 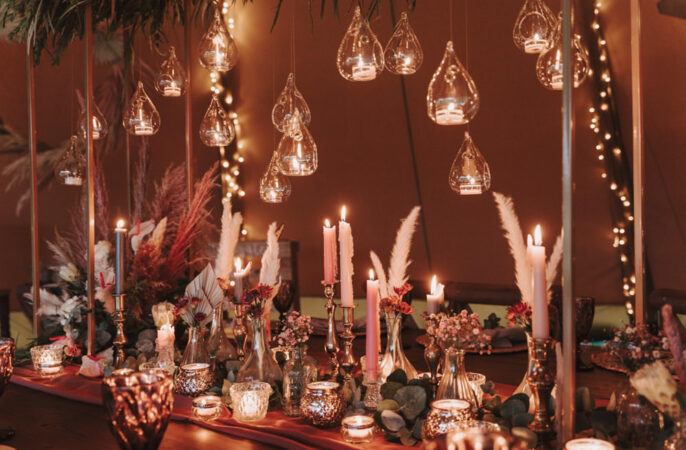 Create an enchanting wedding candle centrepiece with these twinkling ideas. From classic candelabras to modern tealights and boho styles, you'll find your look.