Are you dreaming of a summer barn wedding? Well we have much inspiration for you today thanks to Laura and David, who were married in a church ceremony followed by a reception at the Clock Barn in Hampshire on the 22nd June 2019. It really was a glorious summers day, with bright sunshine and countryside surrounding. Wow!

They envisioned a fun, colourful day, with a boho festival atmosphere. Laura certainly rocked the boho bride style in her lace overlay gown by Charlie Brear with flowers in her hair. Meanwhile David wore a tweed suit and floral tie for a country look. Didn’t they look just wonderful? The bridesmaids also looked amazing in mint green skirts and flower crowns, so pretty.

There were two themes to the décor, llamas and travelling, which made for some really personal touches. I just love the flowers featured here today, as they include the most gorgeous coral peonies. Oh so beautiful!

These delightful images are courtesy of Angela Ward Brown and I am sure you will agree they just capture the essence of the day perfectly. Thanks so much for sharing them with us Angela.

We were in Iceland – (the country, not Brixton’s most reasonably priced supermarket). After a long day of sightseeing, Dave got down on one knee in front of Reykjavik Cathedral. Turns out the ring had been burning a hole in his pocket the whole trip – he couldn’t find the right moment to do it. In the end it was perfect!

We both wanted a relaxed and fun day, full of colour and personal touches. While we enjoy tradition we didn’t want it to be formal and were looking for a country wedding crossed with a boho festival vibe, including plenty of glitter, and glow sticks.

I tired different checklist apps and had a book, but overall I didn’t find them very helpful. I ended up creating my own spreadsheets for all the different things I needed to keep track of, where my work experience came in handy.

The barn was the only venue we looked at, we liked it enough to book it straight after visiting. I feel we skipped an awful lot of stress by doing that! While you can have the ceremony there, we both agreed that hoped to get married in a church, and my parents’ village church really was everything we wanted. It was a real country picture-perfect church, with plenty of charm and just big enough for 100 people.

The church was only 20 mins from the barn which made it a great choice – we wanted somewhere that would work well come rain or shine.

My dress was from Brides of Winchester – Charlie Brear plain satin dress with a lace overlay and a beaded belt.

I thought I would really enjoy the dress shopping but found it quite stressful in the end. I like the Charlie Brear dresses as they allow you to pull the elements you want to create a dress, while with everything else I tried, I wanted to change something.

I’m lucky enough that my maid of honor is a makeup artist and offered to do the girls’ makeup for us. @lougoodsonmakeup

Our hair was done by Torri @Riothairdressing – the girls had their hair up with flower crowns that Eden Blooms made and I had fresh flowers pinned in.

Moss Bros – Dave wanted a blue tweed suit to fit in with our country wedding, and Moss Bros, which was the first shop we walked into, had a lightweight tweed on display in the window that was perfect for a summer day. He made a last-minute change to his waistcoat as he wanted a brown one (the suit’s one only came in blue) – we managed to get it on Amazon the week of the wedding.

Our readings were by my cousin and a friend.

Blessing for a Marriage – by James Dillet Freeman

Falling in Love is Like Owning a Dog, by Taylor Mail.

We had a band (A List – Tailored entertainment) and took them up on the option to have them play an acoustic set for the drinks reception and then later in the evening. Having the music in the sunshine was amazing, and the party on the dance floor later was wonderful. Everybody was raving about the band after which we were so happy about, it was one of our most important aspects.

The wonderful Eden Blooms created the most amazing flowers. I met with Shelly and she was brilliant. The flowers were exactly what I had imagined, from the flower arch to the individual buttonholes for the boys. 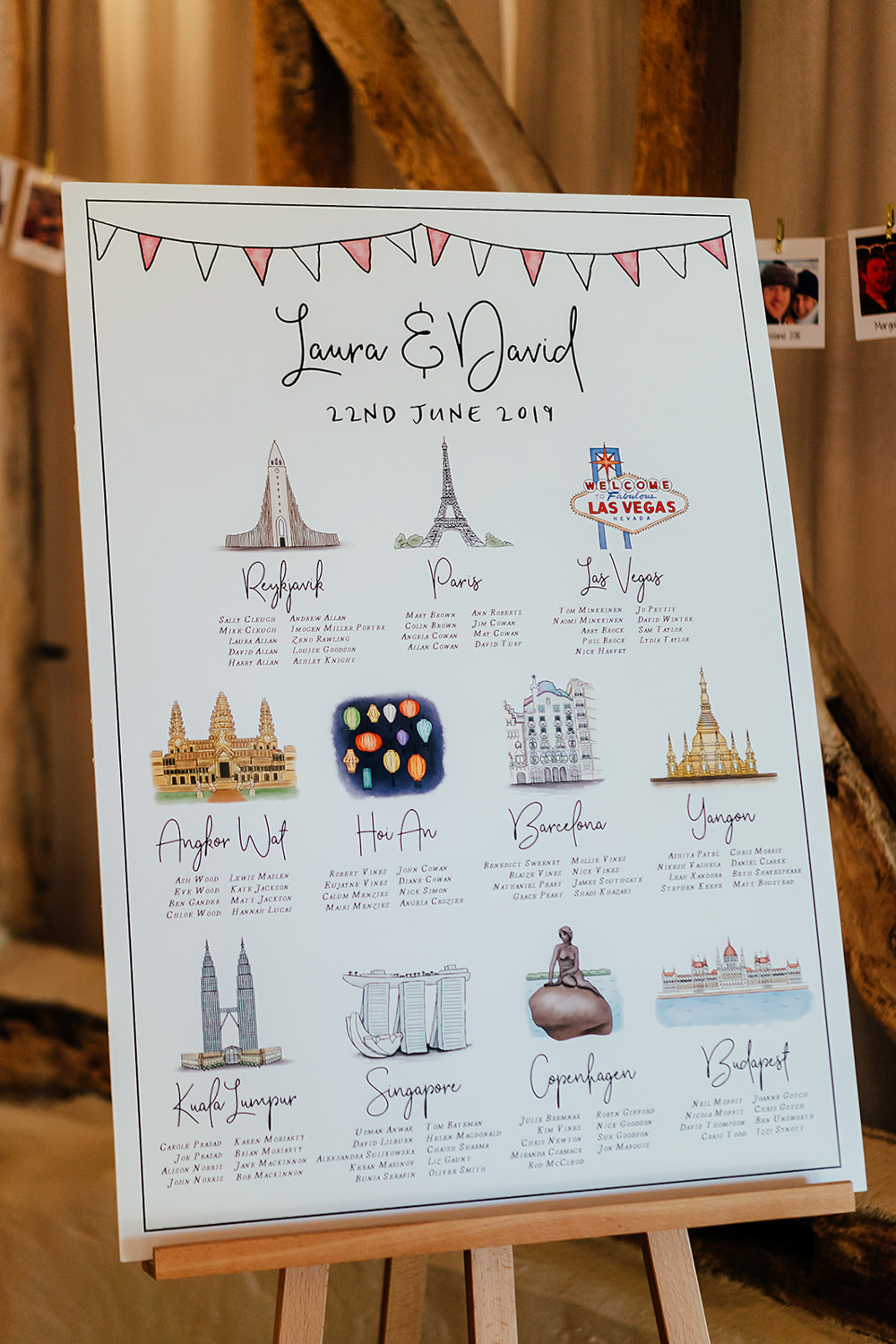 I made the cake – although I would only recommend this if you are experienced in making tiered cakes and you have someone helping you (even if it’s for moral support) and you leave yourself enough time so you don’t get stressed.

I also have an incredibly talented cake making friend @bakesbyjoanne who gave us the llama cake toppers.

The first element of the wedding was to have some sort of llama theming – not because its so ‘hot right now’ but because I have two pet llamas! It’s something everyone knows about my family so it seemed right to include them. We have them on the save the dates, invites, thank you cards and cake toppers.

The second theme was travel – we love to travel and have been to over 20 countries together in the last few years. We named the tables after our 11 favorite cities, and also hung a long string of polaroids of each place we had been.

The amazing Angela Ward Brown and assistant Bernie Palumbo were our brilliant photographers. I had a very clear idea of how I wanted to be captured on the day. When I found Angela’s website and I knew she was the right fit, I loved her style.

I wanted the girls to feel comfortable in what they were wearing, and found these skirts on Pinterest quite early on and knew they were perfect.

LA and Hawaii – we just need to book it!!

The ‘second dance’ at the end of the night – everyone on the dance floor formed a circle and we were thrown into the middle – it was so much fun and a lot less awkward than the first dance.

We also decided after visiting a supplier night at our venue to have a magician (Stephen Karl). It was never something that either of us imagined having, but he impressed us so much. We had him do an hour at the drinks reception and then at the tables – it was a great ice breaker and everyone loved him. 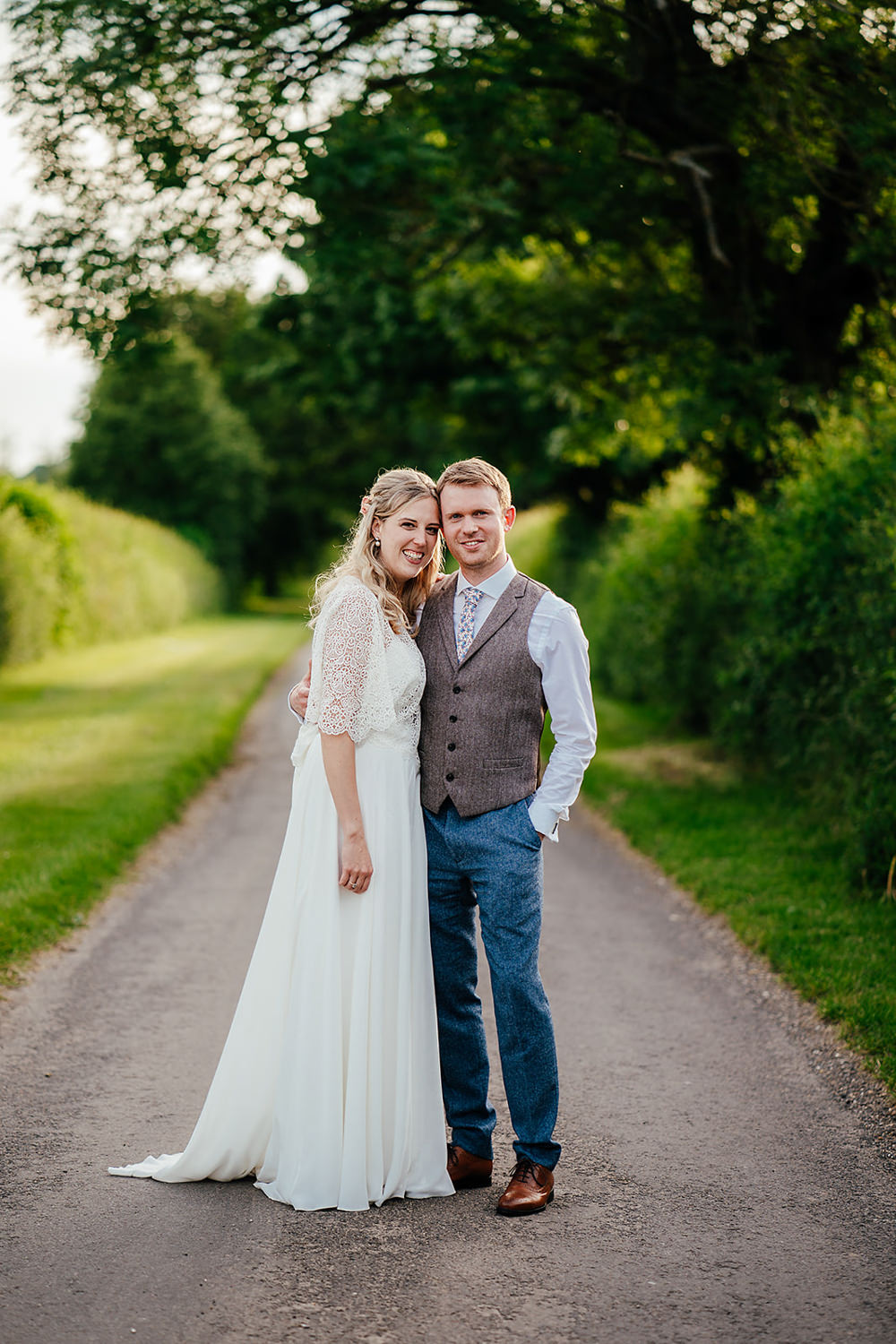 On the day enjoy it, you will stress about all the things leading up to it, but on the day there is nothing more you can do, just enjoy it.

Laura and David, thank you both ever so much for sharing your glorious wedding with us xo Lou