Their day was uniquely them, with some brilliant moments. There was singing, dancing, tears, speeches and laughter galore. I adore their colourful outfit choices, the stunning flowers and the wonderful confetti moment. Plus WWW fave wedding supplier, Custom Neon provided the awesome neon sign in their ceremony backdrop.

Many of the guests joined in the ceremony via live stream, which is a great way to incorporate guests who can’t make your wedding. Oh, and do be sure to check out their proposal, it’s so romantic! I had a tear in my eye.

Many thanks to Sophie Cass for sharing with us these absolutely amazing images of a very special wedding indeed.

We work together making theatre and comedy shows. Jon proposed on stage at the end of an Edinburgh Fringe run, six years after we’d first met (also at Edinburgh Fringe).

We had always seen ourselves with a country house wedding, a big weekend-long event for people from all over the world.

We had to reschedule because of the pandemic and all of Viv’s side of the family couldn’t make it from Australia so we scaled it back to a London event where we could get reliable wifi and screens to integrate our remote guests into the day as much as possible.

The look we were going for was glittery, camp, theatrical and glam. We tried to get as much as possible handmade by us, second-hand, or contributed by friends. The wedding favours were personalised limericks written by Jon and an enamel pin designed by our niece. 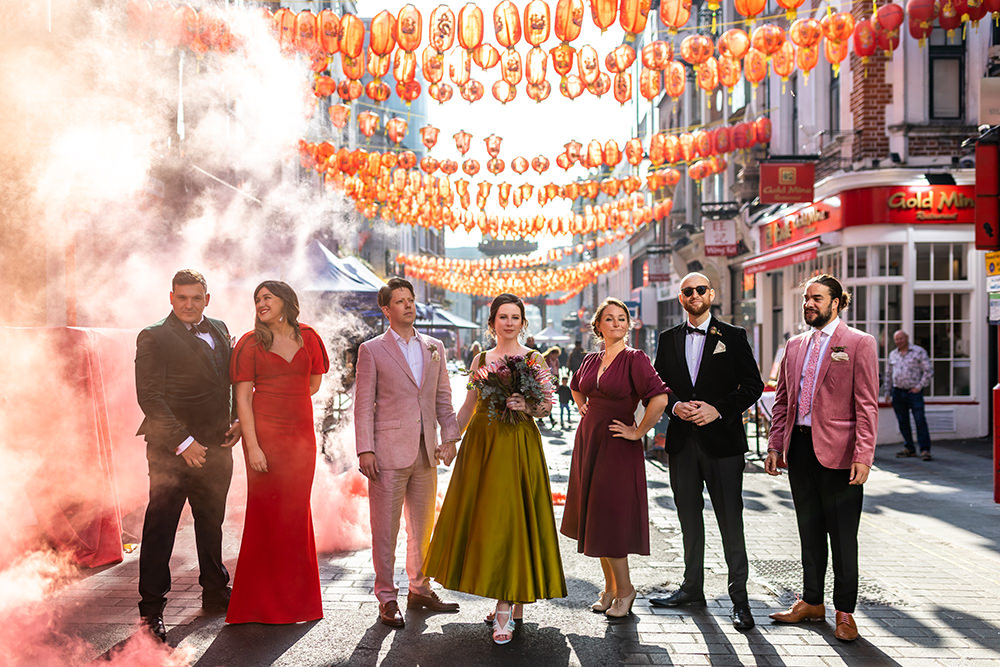 Century Club, Soho, and an afterparty at Opium, Chinatown.

Viv’s dress was custom-made by a couturier called Gay Lewis. She doesn’t have a website, she had put an ad on the noticeboard of our local café before the pandemic. I didn’t want a traditional dress and chose green chartreuse.

My daytime shoes were from Kat Maconie but were very painful to wear so I switched to gold sneakers that I found in a charity shop after all the formalities. I also didn’t want to sweat into my beautiful dress, but I found a sparkly sample wedding dress at a charity shop for £15.

Jon’s pink suit was inspired by Jason Momoa’s pink velvet tux at the Oscars in 2019. Jon looks nothing like Jason Momoa but admires his commitment to style. Jon was delighted to find out that you could order shorts to match, which he wore in the evening.

We asked Brian Lobel, a friend of Viv’s, performance artist, theatre professor and feminist celebrant, to create the ceremony. It was its own little work of art.

We decided not to have any walking down the aisle, so as guests entered the space we sang a few songs (Kiss Me by Sixpence None the Richer, Ironic by Alanis Morrisette and Lover by Taylor Swift).

Our friends performed a song called Nine People’s Favorite Thing from a musical, which is very special to us. Two of the performers were on a pre-recorded video and three were singing in the room. It was very special but a technical nightmare.

We had everyone sing Angels by Robbie Williams at the end, while our remote guests held up a candle onscreen. It was very cathartic. 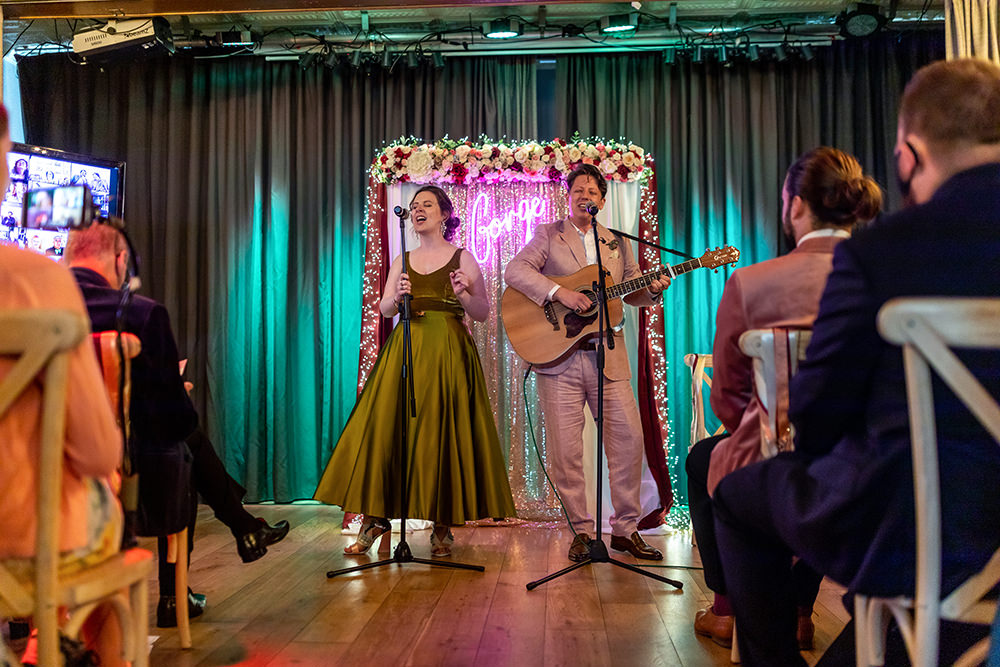 Our videographer was Johna Ash, who really captured the day in an amazing way. Here’s a short trailer that gives you a good sense of it!

Our photographer is the excellent Sophie Cass, who stepped in with just a month to go when our previous photographer pulled out because of a scheduling error. We are so grateful and just love our photos!

We went to Ikos Olivia, a resort near Thessaloniki. It’s an amazing all-inclusive hotel with really great food, cocktails and pools. We had a great time.

We all the styling ourselves. The colour scheme was blush pink, maroon, gold and cream which we used in the backdrop and chair and table decorations. The backdrop was an extra tall clothes rack, which we draped in fabric from charity shops and topped with second-hand fake flowers.

We got the custom neon sign and we topped it all off with fairy lights that we already had and tiny disco balls. Viv made chair decorations with ribbons and charity-shopped jewellery.

The same flowers formed the table centrepieces, in vintage cut glass bowls. The tables were all named after English or Australian flowers, and our mums painted five each (Viv’s mum posted hers from Australia, along with some fabric for Jon and his best men’s pocket squares).

Viv’s bouquet and the bridal party’s buttonholes were from Banksia Flowers and Gifts, the only UK-based florist that could do Australian natives. Viv’s mum made some matching ones for the family watching at home.

We designed all the invitations, programs and signage in Canva.

Make sure you think about the guests’ experience. Make sure they’re not hungry or thirsty or bored, and make sure you spend time with as many people as possible. You’ll be glad you did.

The advice we were given was to take a few minutes alone after the ceremony to take it all in, and also to pause a moment to look around the room at all your guests gathered in one place.

On a practical note, delegating and getting experts to do certain tasks (i.e. we hired an AV technician to help manage the Zoom call as we were doing some quite complex things with it, and we also got a student we know to help on the day laying out the table settings and decorations and being general run-around).

Not everything has to be expensive and brand new. Wedding Facebook groups are great for finding resale items, and our cake was £65 rather than hundreds and really yummy.

Viv and Jon, I can’t thank you enough for sharing your fantastic Century Club wedding story with us.

Catch up on all the latest this month. Including Supplier Love news, my fave weddings and an update from me!

Who doesn't love cake? So of course you want to have a spectacular wedding cake design. These rustic wedding cakes are so on trend and it's easy to see why.

Credit where credit is due