It’s our last wedding ideas editorial of the year and what a cracking set of images to end on a high! These stunning photographs courtesy of Christine Third Wheeling at The Cherry Barn are giving me all the festive vibes, thanks to the dreamy celestial wedding theme. Think stars and moons all round, glitter, candles and fairy lights. Wow.

There is just so much loveliness to take in, starting with calligraphy stationery in black and gold paint affect, a glittering sequin gown, unreal flower arrangements and two dapper groom looks. The veil is a thing of dreams, covered with stars and gems, it glitters beautifully in the light. The table is styled perfectly too, with midnight blue menus, gold cutlery, star place names, candles, macarons and greenery. Plus look out for stunning bridal hair and make up, a very special moon sign and an ethereal cake creation. Swoon.

The idea was based on the story of a couple that had met through a series of coincidences. The approach was relaxed yet elegant: Luxe-boho wedding for a laid back bride with impeccable taste for whimsies.

The Elysian Styling Co. who is the lead of the project designed weddings that tell the story of the couple. It felt especially important that the models had great chemistry. With Lauren and Ryan being a real couple, it seemed perfect! And working with them on the day was a dream. They were so natural together and we feel that it really came across in the images.

Natalie, the woman behind the styling company and Christine the photographer who is Bali-based was introduced through a mutual friend named Dafne (who also played a prominent role on the day of the shoot as one of the members in the styling department).

Veil design was a big focal point, given that the designer, Patrica Wijaya, created it with an actual constellation embroidered onto it. It happens to be Christine’s favourite constellation – Aquarius.

Calligraphy designer ‘Psalm and Sage’ is based in between Bali and Singapore. She created some vow letters for our couple, all hand written in calligraphy. I initially wanted to use capiz shells for the place names, but she was having a difficult time finding them in the right size – apparently they are quite rare in Bali! So instead, she came up with the idea of having some glass stars made with the names calligraphed in gold. And they couldn’t have been more perfect!

Whitehouse Event Hire incorporated some of their crockery and cutlery in the shoot and we couldn’t have been more thrilled when it arrived! The gold cutlery in particular was so unique and gave the table that extra something special with their modern design.

Sue Arran, the florist, was incredible in her delivery of the floristry involved. She was so creative and full of ideas, and she made them all come to life! The hanging floral installation in particular was just so clever. She installed tiny fairy lights in it to give it a celestial touch.

Nicola, from Bonney’s Cakery, created something truly special. After brainstorming some ideas Nicola really made it her own, it was impressive. She specialises in creating flowers from icing and I honestly thought what she had used on the cake was real Lunaria!

Grace Benson worked perfectly within the colour palette and style of the shoot. She just “got” the concept and went with it. Laura looked incredible with the palette of neutrals and golds that Grace chose. 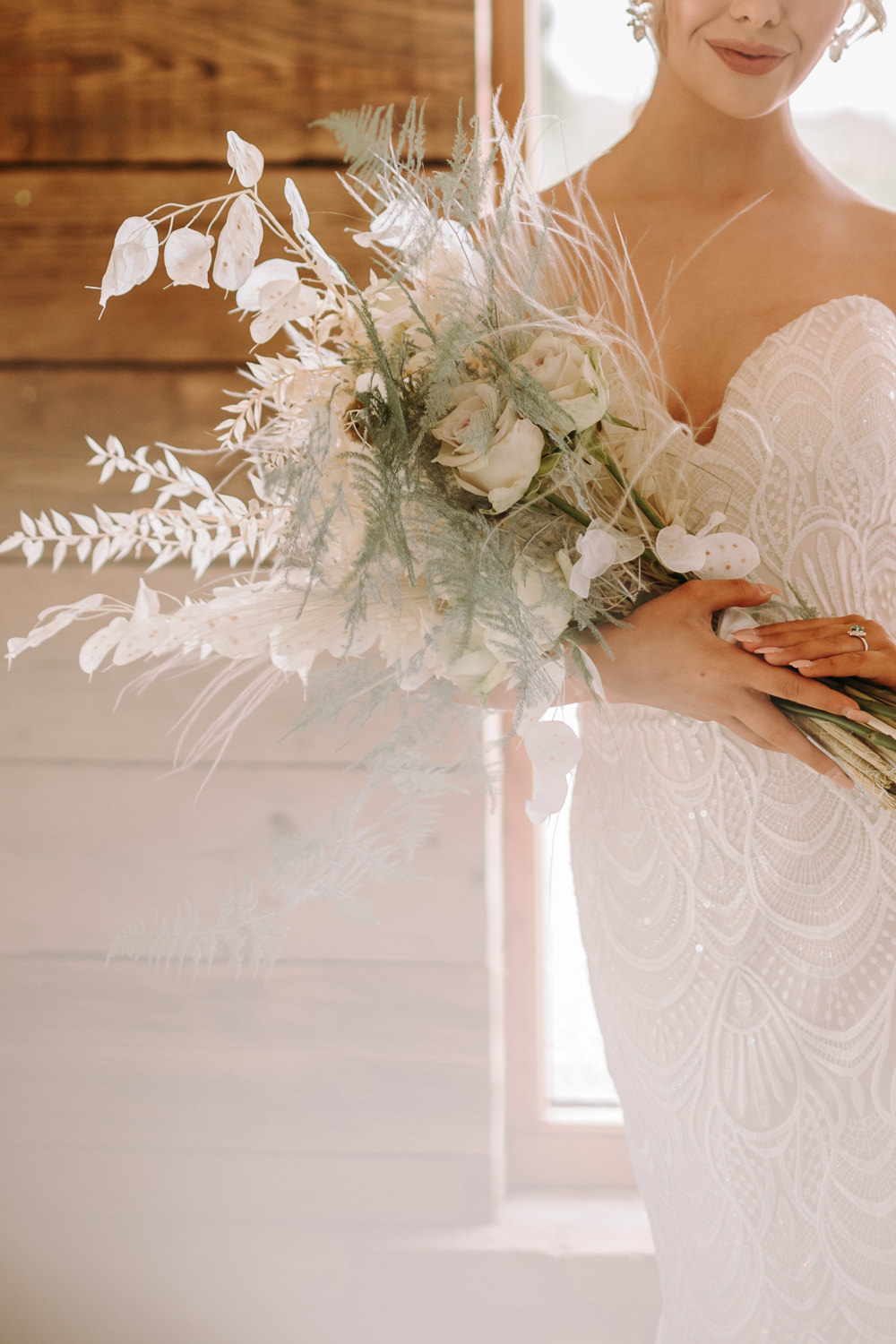 We used three dresses from Fross Wedding Collections. The main dress, Irina by Le Papillon, was covered in streams of sequins, mimicking a night sky full of shooting stars.

P&W Event Hire provided the wooden cross back chairs. Last but not least is the lovely venue that is Cherry Barn. It was the perfect balance of modern yet warm. With its large windows, it gives the barn a unique, bright feel and really sets it apart from similar venues. And if you want your ceremony outside, you can because they are licensed outdoors too!