Bright, laid-back and summery was the order of the day for Meaghan and Brian’s June wedding at Windows on the Water at Frogbridge, New Jersey. It really is a beauty.

Firstly, take a look at that gown. I mean wow. The dress oozes sass and glamour with its sheer lace panels, but is entirely classy with the long lace sleeves and high neckline. The train and veil are just beautiful too, and the whole ensemble really accentuates Meghan’s sublime figure. The boys look incredibly summery in their beige suits, and it’s no surprise that those peach braces were a big hit on the day.

Something I get very excited about is couples who are creative and inventive with their table names and plans, how special that the tables were all named after books by romance author, Nicholas Sparks, and the calling cards with the nods to Beauty and the Beast are a lovely touch.

The outdoor ceremony, pops of colour, and tie-less groomsmen epitomise this relaxed summer celebration. I love reading about our couples’ day in their own words, and Meaghan tells us the story behind the photos with all the special little details that really made their day so wonderful, so read on and enjoy the gorgeous photos captured by Something Blue by Susan Elizabeth. 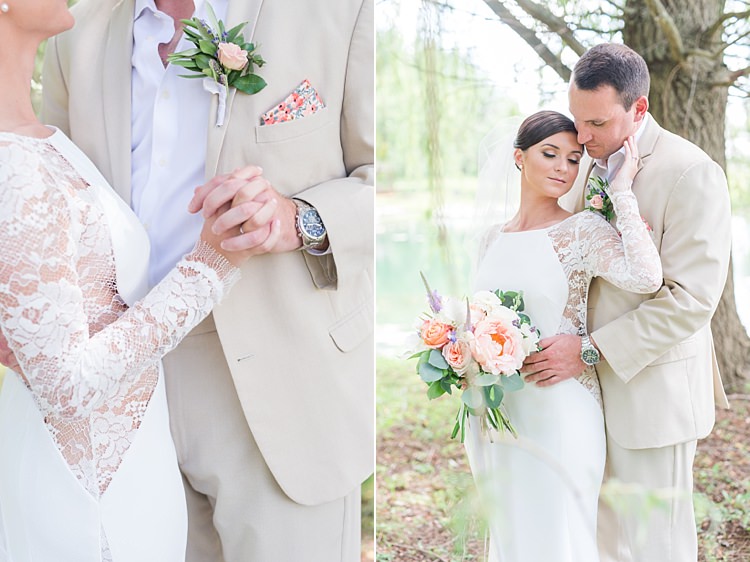 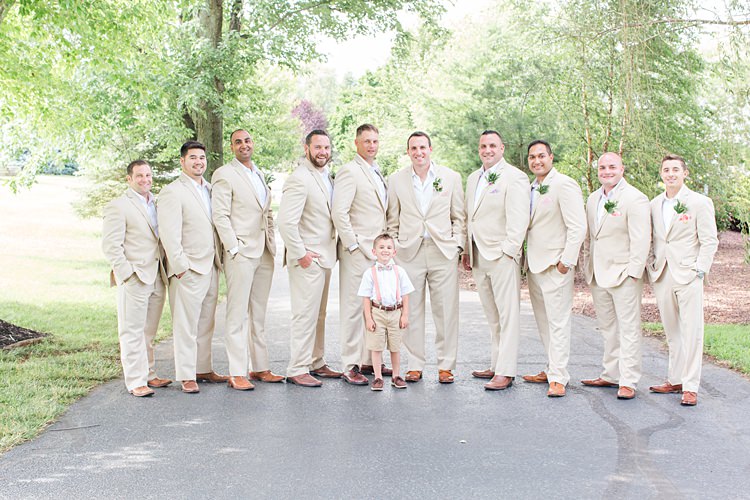 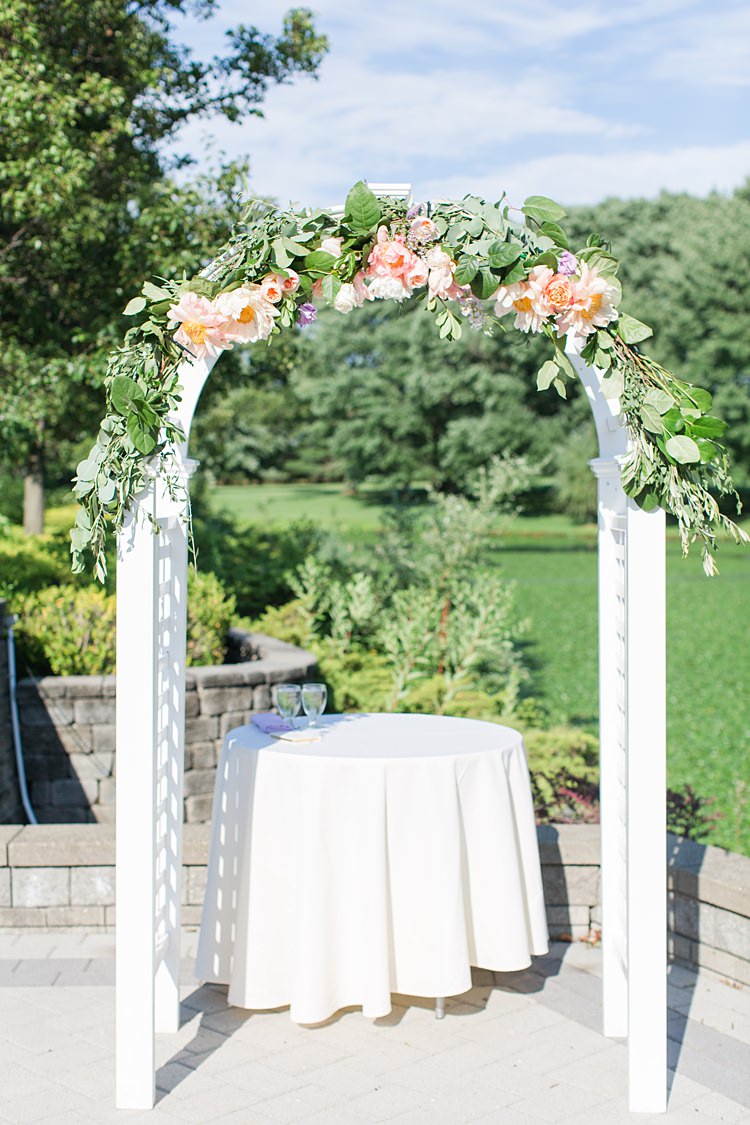 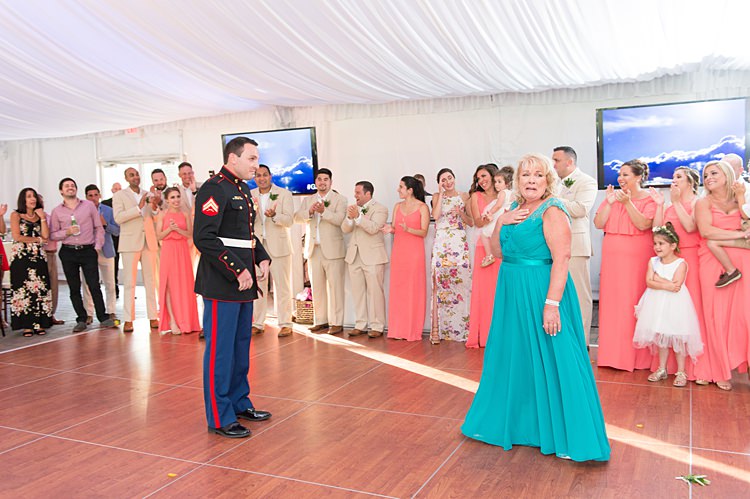 THE VISION | The biggest inspiration behind our wedding day was to have a laid back summer party. There was country music and koozies for your cold beer during cocktail hour and corn hole and whiskey late into the night. We wanted to make the day a reflection of who we are and I think we captured that perfectly! The ceremony was intimate and romantic with the beautiful lake as the backdrop where we exchanged hand-written vows to one another. There were also tons of personal touches throughout the reception. My favorite movie is Beauty and the Beast so we incorporated it in with a Be Our Guest sign for the escort card table as well as walking down the aisle to the instrumentals of A Tale as Old as Time with my Dad.  The tables were all named after Nicholas Sparks books (Brian’s favorite author) and we danced to Carrie Underwood’s Everytime You Look at Me (his favorite singer). In regards to color palette, when I think of summer, the first thing that comes to mind is BRIGHT. The bridesmaids wore coral dresses and my maid of honor was in a coral and lilac floral print. The groomsman matched the girls with coral patterned pocket squares, socks, and suspenders. The best man had a lilac floral pocket square to match my sister.

THE DETAILS & DÉCOR | For ceremony décor, I kept it simple. The grounds itself are spectacular so I didn’t want to overshadow that. We had a floral Arch that we stood in front of as well as small arrangements of greenery, roses, and peonies on the chairs lining the aisle. For inside the tent, we had chandeliers and fabric draped. I opted for low-loose centerpieces in antique gold compote vases that had greenery flow onto the tables to keep the tent from looking too “formal”. I ordered preserved Magnolia leaves for the escort cards and had a calligrapher hand-write all of them in gold lettering. We wanted our guests to also enjoy the beautiful summer night so we had Edison bulbs strung from the trees with lounge furniture for the non-dancers out on the patio.

THE FLOWERS | Flowers definitely played an important role in the overall style of the day. They were everywhere! Since my colors were bright, I wanted to keep the florals on the soft side with peach and lavender.The bridesmaids bouquets had a mixture of white flowers and loose greenery tied with white silk ribbon to compliment their coral dresses. My bouquet had the most beautiful peach peony that definitely made a statement! There were lavender sprigs mixed in as well to add texture and color. It was accented with lavender and white silk ribbon.  My centerpieces were straight out of a pinterest dream! They were low, loose, and lush draped on the tables in gold compote vases. Our sweetheart table had a runner of thick greenery as well as flowers attached to the back of the chairs.

MEMORABLE MOMENTS | The whole day was personalized! We had custom koozies made along with napkins that had our hashtag on them for cocktail hour. For the dance with my Dad, I recorded a letter that I wrote to him. It began playing as he walked onto the dance floor. We were both in tears. The biggest tearjerker of the night goes to Brian’s surprise for his mom. We set up with our DJ that during the dance with my Dad, Brian was going to leave the tent and get into his Marine dress blues. Once he was ready, he was given the mic to start talking to his Mom. She had no idea what was going on and lost it when she heard him say “you always wanted to go to a Marine Corp Ball and today is your chance”. He came out to dance with her all dressed up and there wasn’t a dry eye in the room. We also had a photobooth, custom made corn hole boards, and a whiskey & cigar bar set up. There was something for everyone throughout the night!

THE FASHION | Even though I was having an outdoor summer wedding, I was set on having a long sleeve dress. One of my friends knew this and actually sent me a picture of the dress on Pinterest shortly after getting engaged. During my bridal appointment, I was browsing the racks and THAT dress was there. Talk about fate. I tried on a few more dresses but ultimately came back to it. I had never seen anything else like it before and knew it’d be a showstopper. The lace back and sides gives it a sexy edge but the solid white crepe adds a classic touch. I complimented the dress with pearl studs, gold Manolo’s that my brother bought me as a wedding gift, and a finger tip length veil. I kept my hair in a sleek side part with natural glam makeup. It all came together for a look that was totally me without taking away from the beautiful dress. Brian’s look was the epitome of a summer wedding. He wore a beige linen suit with a floral pocket square, peach socks, and suspenders. We decided to ditch the tie in order to keep with the laid back vibe. The suspenders were a last minute add on after learning the suits didn’t have belt hoops two days before the wedding! They wound up being a huge hit and looked awesome in pictures.

THE PROPOSAL | Brian and I met back in January 2012 during our last semester at the community college we were both attending. He was one year out of the Marines and I had transferred schools. Even though we were in the same Exercise Science program, we never had a single class together or crossed paths before. It wasn’t until that last semester when it all changed. We met in Chemistry class and after briefly talking with our mutual friend, realized we had 5 classes together that semester. We became close friends throughout the months and started dating after graduation. Now 5 years later, we’re married! Fun fact, both of us changed our career paths from when we met. He’s in Medical Sales and I work in Finance.For the proposal, Brian knew he couldn’t do anything out of the ordinary because I may or may not be notorious for ruining surprises. I just always find out. Well the week leading up to it, he got really sick and I had taken off work to take care of him. That Saturday, we went to the doctors for a follow up appointment and after the doctor told him he was fine, he suggested we take a walk over at Natirar Park because it was such a nice day out for February. While walking around, Brian was looking intently around to make sure we were alone before getting down on one knee and asking me to marry him. I was SO shocked! I loved that he kept it simple and at a place that we visit often.

SPECIAL MOMENTS | The most anticipated moment of our day would definitely have to be the vows. We were both having writer’s block the entire week leading up to the wedding. It was making us second guess our decision. However, the night before the wedding, we both found a quiet place to write them and they came out perfectly! I’m so glad we decided to do it and have them written in vow books to have them forever. The second most anticipated moment for us has to be the surprises to our parents during the dances. It was weeks in the making and they were pulled off seamlessly.

ADVICE FOR OTHER COUPLES | Stay true to yourselves! It is the one and only day that is about the celebration of the two of you. Also, don’t get caught up in every crazy wedding trend out there. It will drive you insane and make decisions impossible. Stick to your vision and don’t let things steer you from it. Then there’s the cliché “enjoy it because it goes by too fast”. It really does. Try your best to take a step back and soak it all in! Lastly, have fun! You only do it once.

Photographer |  Something Blue by Susan Elizabeth

Bridesmaid Dresses | Show Me Your Mumu

Reception Venue | Windows on the Water at Frogbridge

Thank you so much Meaghan and Brian, what a joy!  Petra x

Written By
Petra Acred
More from Petra Acred
Cosy up my dears, we have a fabulous December wedding to inspire...
Read More