It’s here, the very last real wedding feature of 2018 and I have to say I think it’s one of my favourites I’ve featured this year. Yes it’s a total beauty of a day, filled with colour, love and happiness all round.

Livi and Pat were hitched on the 1st September 2018 and they had a meaningful outdoor ceremony against an ancient oak tree, which was just magnificent. If that wasn’t all, they had a moon gate to end all moon gates as a backdrop to their vows. It was a real show-stopper and included pampas grass and sunflowers to name a few. Wow! In fact all of the flowers were just incredible, I really love Livi’s bouquet and flower crown in particular.

They also created a bell tent village for all to camp over for a true festival vibe. I really love that they used their favourite books in some of the details, they included some crackers and it made all the touches really personal. The attire was amazing, the portraits incredible and all in all it was a super memorable day.

I really cannot thank Chloe Lee Photography enough for sharing these superb images with us today. 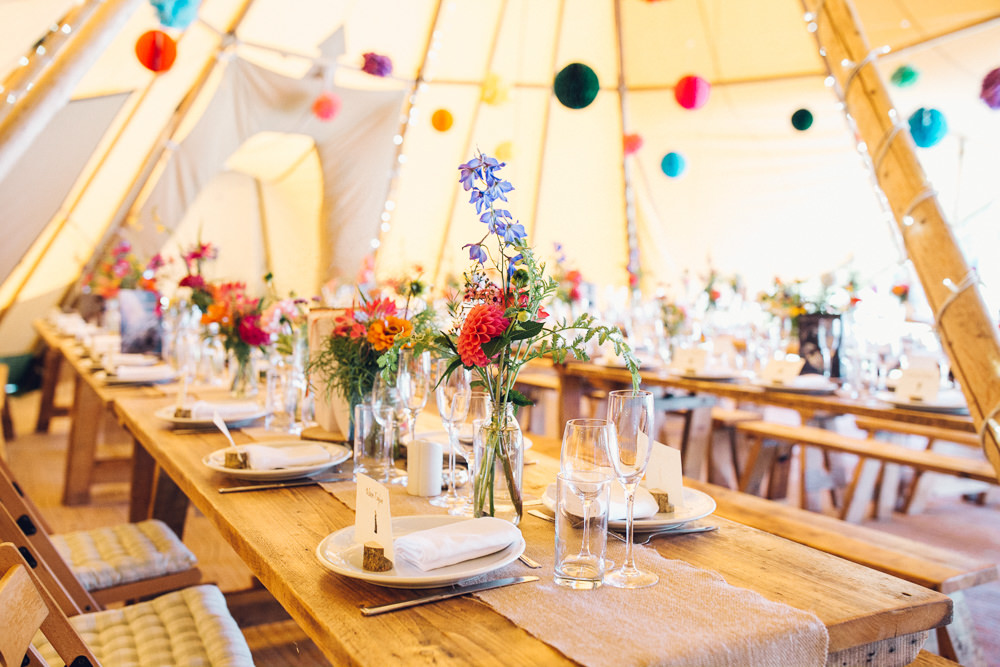 The stars aligned when Livi’s father Nick asked Pat to drop off 20kg of Lincolnshire potatoes off at Livi’s parents house. Pat seized the opportunity and asked Nick if he could have his daughter’s hand in marriage. The proposal was somewhat romantic, Livi came home from a weekend away and found the flat filled with flowers, and then promptly went into the garden to water the flowerbeds. After coaxing her away from her roses Pat got down on one knee and very quickly proposed.

The vision was simple – bright colours, outdoors, and festival vibes. There were no pantones or matching outfits, we wanted a relaxed, fun wedding, which reflected our personalities, love of festivals, camping, good food, and literature (particularly sci fi and fantasy novels).

We had 11 months to plan and deliver the wedding of our dreams. We knew what we wanted so it was just a matter of sourcing suppliers, doing a bit of DIY and eBaying, and making sure it all came together. Planning and organisation comes naturally to us so it was pretty easy, there were flurries of activities some weeks and then weeks of chill. We used local suppliers and found ourselves a great wedding crew. On the day we relied massively on our large wedding party, seven bridal squad members and seven groomsmen to make everything run smoothly, with two separate synced Google calendars of course.

We met Alice and Tim, the owners of Manor Park Farm, and they very kindly agreed for us to have our wedding on their land. Manor Park Farm isn’t a wedding venue, though they do host yoga retreats and bush craft events. It is made up of 12 acres of fields and woodland in Wethersfield with two lakes, views and gorgeous pigs. We held the ceremony in the woodlands in front of an ancient oak, had the party in the tipi in the lower field, and we camped on-site in bell tents.

Livi: My dress was designed by Lucy Can’t Dance, a flipping awesome dress maker based in Chelmsford who does super cool alternative dresses. I wanted something fun, which would suit the atmosphere, and with a bit of a twist. Being short of statue, I opted for a two piece, the skirt made of silk and dipped dyed with grey and light blue. It was too hard to choose a top so I had two made for me, a ceremony look and a party look. The evening tassels were so great, especially for dancing, though I did end up attached to many men’s cufflinks. At night time I kicked off my high Jimmy Choos and swapped into my white and sparkly Doc Martens and white denim jacket my sister made me for the day, with patches of our spirit animals and printed fabric photos of our three cats, Nina, Bruno, and Kally.

I wore my Mum’s pearl earrings and gold and turquoise ring that my Mum bought in Tehran in her twenties and had recently given me.

Pat: I bought my maroon checked suit from a high street brand called French Eye, who tailored it for me in store, an experience I really enjoyed. I complimented this with a custom blue waistcoat from the itailor.com, which came through a little skinny, and a super slim fit shirt from Hawes and Curtis. I also bought sets of steam punk cufflinks, pocket watches, and cravat and pocket square sets from eBay for me and all the groomsmen. 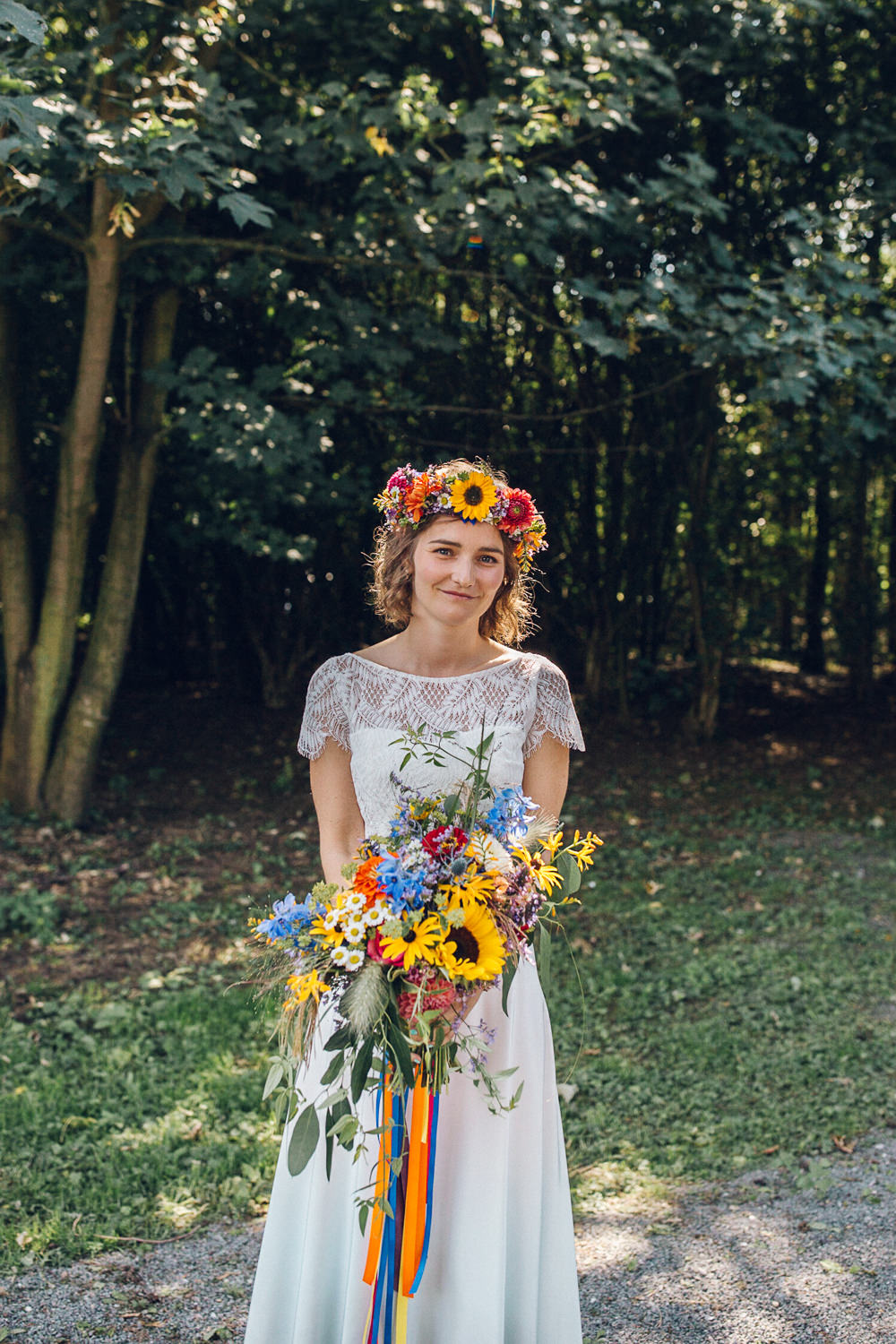 I was really lucky to have one of my bridal squad Alice do the hair and make up, so it was very relaxed, and I knew I was in amazing hands. Alice made me look like an angel, fact.

Pat: I just went and got a haircut from Ted Baker on Cheapside in London exactly one week before the day, having previously tested exactly how long a new haircut would take to grow out to my preferred length.

I asked the groomsmen to all wear a grey suit of their own, being happy to have them in different shades, then they each obtained an extravagant waistcoat in different colours. They also wore cufflinks and pocket watches and the look was finished off with a contrasting cravat and pocket square set.

We were pretty proud of our wedding readings. We kicked off with a short speech from our friend Ben who talked about how he met us individually and introduced us, the contents was a surprise and it cracked us up. We also had a reading from The Amber Spyglass by Livi’s uni friend. Our final reading was an adapted version of the poem called A Scientific Romance, by Tim Pratt. Our friend Richard had memorised the whole thing (it was long), and delivered it with great aplomb. What was lovely about our ceremony was that the celebrant was a dear friend of ours, Stevo. We had got legally married a few days earlier in Brixton registry office, so in the ceremony in Wethersfield we could make it personal and include whatever we liked.

We cannot get enough of the Country Garden Flower Company. Patrick and Sheree are not your ordinary wedding florists, they are magical. Everyone was blown away by how beautiful, colourful, and ‘un wedding like’ their flower arrangements were. When we first made an enquiry with them, they invited us for an appointment at their workshop near Colchester where we explained our vision and they talked us through their ideas. We immediately knew they were the florists for us. All the flowers were brightly coloured, from the bouquets to the buckets, to the floral crown, and most importantly the moon gate we were married in front of. They really made the day.

There were so many details it is hard to think of them all. The literary theme mostly came alive in table decorations, we chose our favourite 18 sci fi and fantasy novels, which we mostly sourced second hand hardbacks for, and Pat designed a new book cover for each of them based on a place in the novel, so for example, we had tables called Hobbiton (Lord of the Rings), Jordan College (His Dark Materials), Arrakis (Dune), and Ankh-Morpork (Discworld). Pat also designed individual table place cards for each person using a symbol or character from the novel the table was named after. Pat’s youngest brother Joe also made wooden signs with different images and colours, which were named after taverns and notable venues in books and staked in the ground outside the bell tents the wedding party camped in, so for example the Prancing Pony (Lord of the Rings), and we slept in the Winespring Inn (The Wheel of Time). One of our favourite decorative touches were the huge silk festival flags we hired and had dotted around the field the tipi was in and the field the camping was in, the bell tents looked amazing against that backdrop.

We were so lucky with our cake. I was visiting my best friend Rachel in Birmingham and talking about the wedding cake when out of nowhere she offered to make it for us. Rach spent months perfecting the recipe and every time I spoke to her it seemed her ideas were getting more and more creative and ambitious. On the day she juggled her duties of bridesmaid and cake maker with no stress. The cake was stunning and so delicious, it was a three tied naked sponge with jam, buttercream, edible flowers, all presented on a huge tree slice, completed with three carved wooden models of our cats on the floor in front of the tablecloth.

The vision for the bridal squad was mismatching outfits with embroidered flowers. Every person had a different bright colour, and with seven of them we covered the whole rainbow. The dresses were mostly from ASOS, so super cheap and all had different embroidered flower patterns on them. Though the one male member of the bridal squad, Duko, wore a waistcoat from a Bulgarian Etsy store embroidered in purple flowers with a mismatching purple floral bowtie, and he looked incredibly dashing. 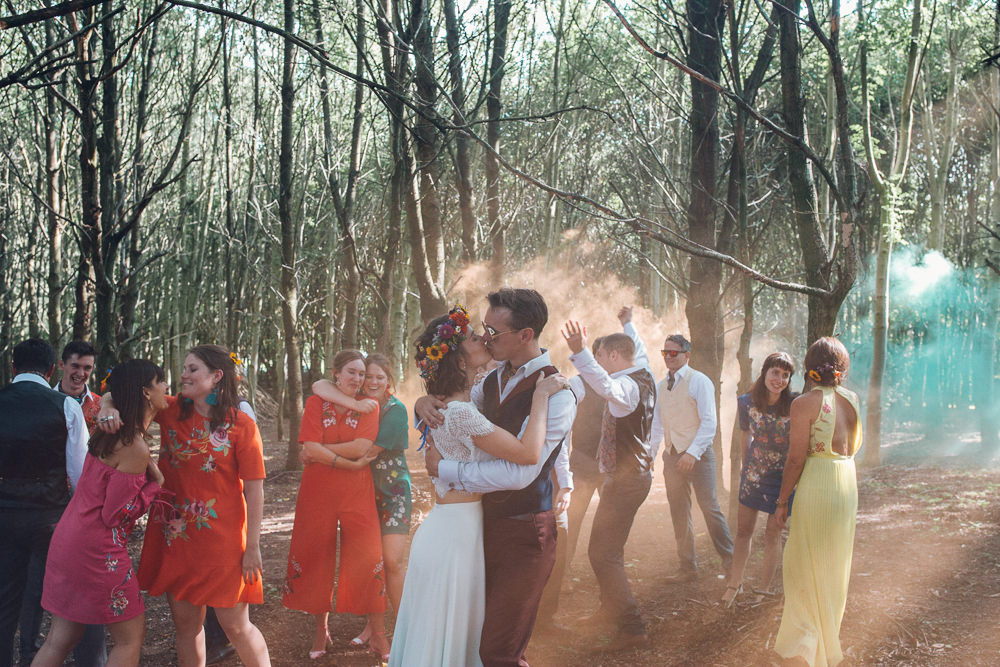 We stumbled across Chloe Lee through a google search while looking for an Essex based photographer who did fun weddings. We arranged a skype meeting and hit off immediately, especially when we realised she has been watching Lord of the Rings in the background. We also loved the fact that on her website she has a list of fantasy weddings she wants to shoot, which includes a Jurassic Park themed and Harry Potter themed wedding. Chloe was amazing on the day, she seemed to be in so many places at once, and captured everything. She put everyone at ease and took some amazing candid shots, as well as great ones of the wedding party in the woodlands working it like we were on an album cover.

We are lucky that Pat’s father John is great video editor and makes compilation family holiday videos to music as a favourite pastime. In advance we asked guests to film bits and we also had multiple Gopros on the go through the day and night. John has produced about eight videos for us that capture the whole experience.

We flew off on honeymoon three days after the wedding to Pemba Island, and stayed at Fundu Lagoon for seven nights. It was absolutely stunning, and super chilled. Just what we needed.

Our top moments were:

Don’t compromise your vision or what you want for anything, keep it as personal and as true to yourselves as possible. Don’t give into other people’s opinions or views. When we originally showed our parents the venue they couldn’t envisage what we could and struggled to see past a couple of fields with a lot of nettles and mole hills! We remained steadfast and the on the day it looked amazing, and the sun came out for us.

Livi and Pat, thank you so so much for sharing your epic wedding story with us. Such a colourful and fun celebration! xo Lou