There is something so lovely about going back to your university to get married, especially when it’s where you met. It’s so personal, sentimental and thoughtful, an ethos at the very heart of Whimsical Wonderland Weddings. So there is no surprise that I loved reading the story of WWW readers Lauren and Simon who are featuring here today. Their uni friends must have loved going back to celebrate with the couple especially.

The couple were married in the Royal Holloway University of London chapel on the 23rd June 2017. The chapel is only available for only students, alumni or staff, making it a really special venue. The space was pretty incredible too, it must have been so atmospheric. It meant the couple didn’t need to go to town on the details, but could simply decorate and focus on a fun vibe. The flowers took centre stage with boho olive leaves and peonies used throughout to great effect. They also ensured a Mediterranean feel to their day, with the Croquembouche tower giving a nod to their French roots.

They hired in live music to entertain, the Mariachi band in particular looked so entertaining and certainly contributed to the couple’s memories of the day. I just have to finally mention their choice of attire. Lauren’s ethereal gown was by David Fielden, it certainly looked stunning on her. Simon meanwhile went down the bespoke route for a really special grey suit and he looked very dashing.

I cannot thank Andrew Brannan Photography enough for sharing these phenomenal shots with us. 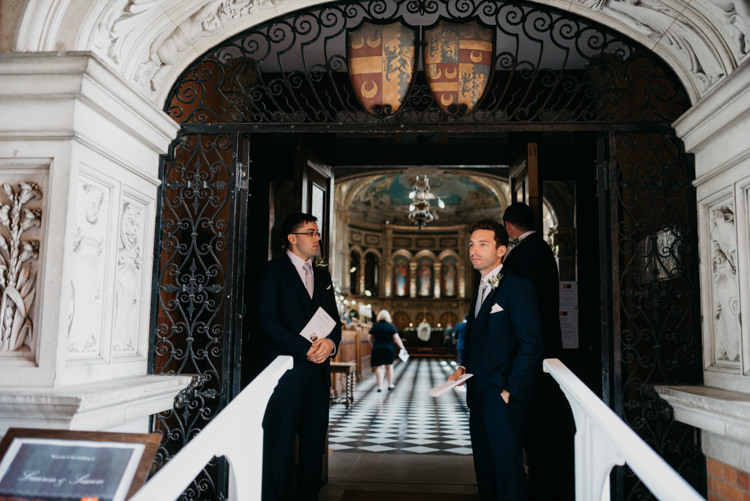 THE PROPOSAL | As a 25th birthday present, Simon took me away to Mexico. It also coincided with our 6 year anniversary, which was on the penultimate night. We went for a private meal on the beach to celebrate and that’s where he asked me. I was so shocked I couldn’t get my words out and to this day I can’t actually remember what happened, but I’m told that I grabbed the ring out of the box!

THE VISION | Ultimately we wanted our wedding to be a reflection of us and our relationship, so there were lots of very personal elements included. For example, although we had a Church wedding, Lauren has some Jewish family and so we incorporated this by doing the Hora to “Hava Nagila” (traditional chair lifting) and a little Israeli dancing after the first dance. One of the most important things was for it to be full of fun and humour, as neither of us are particularly serious people.

We both love the Mediterranean and have spent a lot of time in the south of France, so this was definitely a big part of the look and feeling of the day, even though we were in an English University in Surrey!

THE PLANNING PROCESS | We planned the wedding over 18 months, and so to be honest didn’t really get too stressed until the end… namely the day before when Simon forgot his bag that included the rings, passports and honeymoon tickets!

Most vendors were found online and through blogs, and we didn’t really have to spend any time looking for a venue as we already knew that’s where we would get married! As we had quite a clear idea of what we wanted the rest was fairly simple.

THE VENUE | Royal Holloway, University of London. We both studied History and met each other and many of our best friends here so it’s extremely sentimental for us. While anyone can have their wedding there, only students, alumni or staff can get married in the Chapel, so this also made it extra special.

THE DRESS & ACCESSORIES | A David Fielden gown from Angelica Bridal in Islington. For the ceremony I wore a short waterfall veil also from Angelica Bridal, and after that I changed into an olive leaf crown that matched all of the flowers. On my feet I wore Sophia Webster “Lilico” block heels in pale blue, and my trusty white Birkenstock Arizona sandals in the evening. I had earrings from Monica Vinader but didn’t wear any other jewellery.

FINDING THE DRESS | The first word I gave when describing the kind of dress I wanted was “ethereal”, and in the end it fitted the bill exactly. People always told me that the dress I’d end up picking would be nothing like what I thought I would pick, but it was. I pretty much knew what I wanted from the get go, as I am really picky. I went dress shopping with my Sister/Maid of Honour and my lovely Mum who actually bought me my dress, and they both picked out styles for me to try in addition to picking myself. My sister actually found the one I chose!

I also always suspected that I would go for a British designer, as I just find their dresses to be the most stylish and often a little bit more “edgy” than your traditional wedding dress. I was so over the moon with mine and wish I could wear it all the time!

THE READINGS & MUSIC | Lauren was walked down the aisle by her Step Dad to La Vie en Rose by Edith Piaf being played on the piano. The Chapel has an amazing organ, which all the hymns were played on, as well as Mendelssohn’s Wedding March from A Midsummer Night’s Dream when we walked out. This was definitely the most traditional element of the day but in the setting it worked perfectly.

We had 2 readings as a part of our wedding service, one religious and one non-religious. Firstly, both of Simon’s sisters read “A love poem between two lovers (Song of Solomon, Chapter 2, verses 10-13; Chapter 8, verses 6&7)”, and Lauren’s Aunt read an extract from Captain Corelli’s Mandolin, a book which we both love.

One of the highlights of our day was the amazing Los Hermanos Mariachi band playing at our drinks reception after the ceremony. They played covers of some of our favourite songs including “Volare” by the Gipsy Kings, and classics like “Tequila”. Of course their rendition of “Despacito” got everyone dancing!

Our first dance was “Everywhere” by Fleetwood Mac. We debated over this for a long time and it was definitely the perfect choice, it really set the mood for the evening and got everyone on the floor with us. It’s a song we both love and sing a lot in the car or at home, and the lyrics are just gorgeous too. After this we had the amazing Blue Juice play two live sets, with songs ranging from “You can call me Al” by Paul Simon to “Ignition” by R Kelly. After they finished playing they put on a playlist that Lauren put together, and the last song of the night was “Africa” by Toto, which everybody sang at the top of their lungs.

BEAUTIFUL BRIDESMAIDS | We had six bridesmaids; Lauren’s little Sister (the Maid of Honour), her best friend from University, her two cousins and Simon’s two sisters, as well as her young cousins as flower girl and page boy. The bridesmaids wore matching dresses from David’s Bridal. As a gift I gave them dainty silver bracelets with an olive sprig design (to tie in with the flowers) from a seller on Notonthehighstreet called Little Nell. The flower girl wore a dress from Monsoon and the page boy wore an adorable mini suit from Notonthehighstreet.

THE FLOWERS | These were such a big part of the Mediterranean look of the day. From the beginning we knew the kind of thing that we wanted; olive leaves and white peonies being the focal point. Everything else kind of grew around that thanks to the help of Gabi from the Fine Flowers Company, and in the end it all looked stunning. Even the olive leaf crown that they made me matched the one that they made for the flower girl perfectly, and she had a mini version of my bouquet, which was adorable.

THE CAKE | We wanted to weave a French wedding tradition into the day, as Simon’s Mother’s side of the family are French. We did this by having a Croquembouche instead of a wedding cake, and we also had this as our dessert. It was absolutely delicious! It was covered in spun sugar and nuts, and the fillings were a combination of vanilla and Cointreau crème patisserie.

YOUR PHOTOGRAPHER | The amazing Andrew Brannan. We found his site and instantly fell in love with his pictures. His style is so effortless and he did such an amazing job of capturing all of the most important parts of our day. Neither of us particularly like having our photo taken but he made us feel so comfortable and he was such a nice guy.

We also had Philip Smith filming the day, and we honestly couldn’t be more thrilled with how it came out. Again the highlights film really captures everything about the day that made it so amazing and is so beautifully put together. Lauren burst into tears within 30 seconds of first watching it!

THE DETAILS & DÉCOR | As each different part of Royal Holloway is so beautiful and ornate, other than the flowers we didn’t really need any décor. The surroundings spoke for themselves.

Our good friend Matt designed all the wedding stationery for us; invitations, orders of service, table plan, place names and table numbers! He did an incredible job tying in the Mediterranean elements, with olive sprig and evil eye details. It all looked absolutely amazing! We also had small glass evil eyes as our table favours. It’s something that has always been really important to Lauren as a symbol of protection, we have them all over our flat.

THE HONEYMOON | We went on our honeymoon a couple of days after we got married. We first spent 8 days in Miami as it is one of our favourite places, and then we went on and travelled around Honduras for 11 days. We saw the Mayan Ruins in Copán in the west, stayed in an amazing lodge at Pico Bonito national park, and spent the last portion of the trip in Roatán, a dreamy island about 50km off the coast. It was incredible!

MEMORABLE MOMENTS | Coming back from having our photos taken to everyone cheering and singing “Can’t take my eyes off of you” with the Mariachi band. Also standing at the buffet together at the end of the night eating chicken and looking out at the room together, watching all of our friends and family have the most amazing time. We were so happy and felt incredibly lucky.

ADVICE FOR OTHER COUPLES | DO WHAT MAKES YOU HAPPY! It’s your day and it’s so easy to get caught up in the most stupid details, but ultimately it’s about the two of you. All your friends and family will be happy and have a great time regardless. Also make sure you look around and take it all in at least once!

Such a fun loving celebration.

Lauren and Simon, many thanks to you both for sharing your gorgeous wedding story here with us xo Lou