WWW readers Fiona and Paul held their hand-fasting wedding ceremony beside Loch an Eilein on the 5th September 2015, within a pine forest in the Highlands of Scotland. A good old fashioned knees up followed at a village hall which was decked out in bunting, festoon lights and DIY décor. In fact most of their day was a home made effort, with the blooms, food and stationery all being arranged by this amazing couple.

The setting was so magical and the bohemian vibe flowed into the attire too. Fiona chose an exquisite backless gown by Free People which she teamed with a Gypsophila flower crown, Paul meanwhile opted for a classic look in a handsome kilt and jacket.

Thanks so much to Solen Photography for sharing these striking images today. 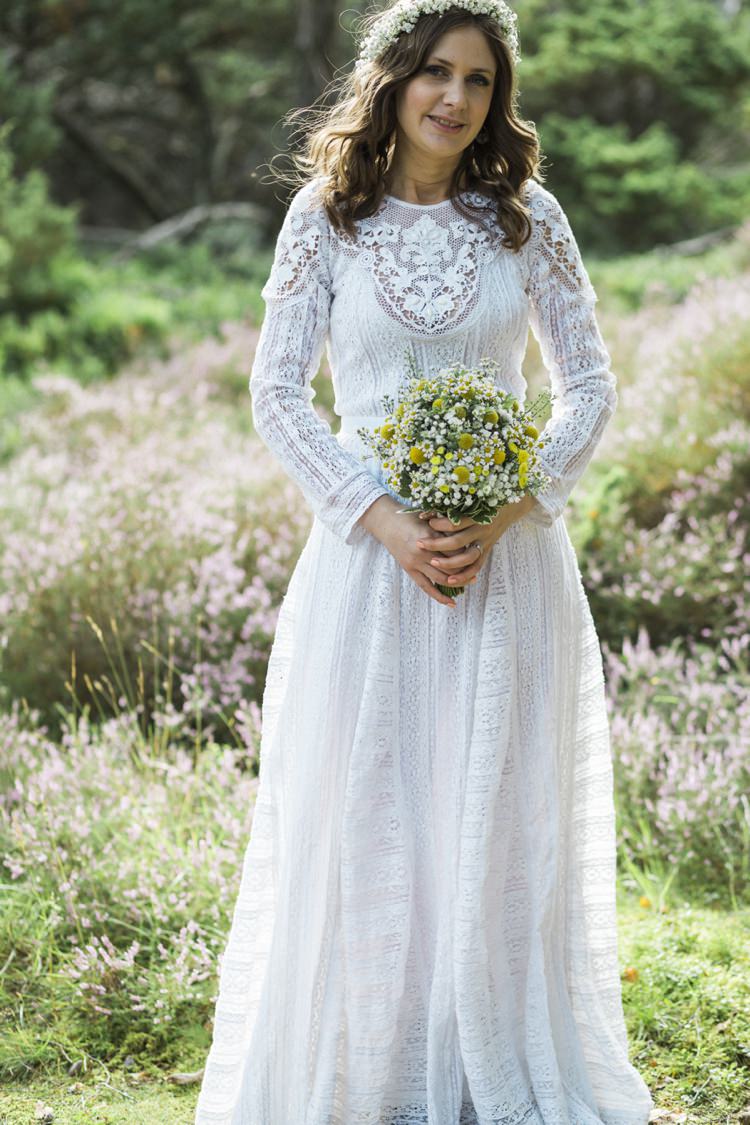 THE PROPOSAL | We were engaged for 8 years before we got married! We have been together 14 years now. We went backpacking in Australia in 2007 where Paul proposed at Ayers rock. We didn’t know it at the time but we would carry on travelling on and off for the next 6 years. So it took us a while to get around to it!

THE VISION | We knew we wanted our wedding to be relaxed and informal and most importantly represent us as a couple. We wanted you to walk in and know who’s wedding you were at. We also really wanted to have an outdoor ceremony. In terms of theme, I wouldn’t really say we had one – it was a bit vintage, a bit rustic, a little nod to our travels – really it was just a collaboration of all the things we like.

THE PLANNING PROCESS | Well we had 8 years to think about what we wanted! We set the date about a year before and from then we starting planning properly and booking things. Pinterest and wedding blogs like Whimsical Wonderland Weddings gave us lots of inspiration.

BUDGET | We ended up spending about £8000. We did as much as we could ourselves both to keep costs down and because we liked the personal touch. Paul is a chef so he made a lovely vintage style buffet in advance which friends from Be Eventful helped serve on the day.  I made all the invitations and decorations including 50 metres of bunting (with a little help from mum!) and my dad made a bar out of discarded whisky barrels and also made 5ft light up ‘P&F’ letters.  Paul’s sister Victoria made our beautiful ‘naked’ cake and my bridesmaids and I did the flower arranging.

THE VENUE | We were married in a Humanist ceremony on the shore of Loch an Eilein, near our home in the Highlands of Scotland.  Loch an Eilein is a beautiful loch set in an ancient pine forest and has a 13th century island castle in the middle.  It’s a pretty special place.

The reception was held in Dulnain Bridge Village Hall. It’s a really cute little hall and it really suited us perfectly as we had free reign over what to do with the place.

THE DRESS & ACCESSORIES | I wore a backless lace dress from Free People with brown Steve Madden Troopa boots and a gypsophila flower crown. My earrings were from Accessorize.

FINDING THE DRESS | I went to a couple of different shops in Glasgow and Edinburgh but didn’t really find anything in the style I was looking for. Because we live in Aviemore, quite far from any bridal shops, I spend a lot of time looking online and found my dress at Free People.

GROOM’S ATTIRE | Paul wore a Balgownie tartan kilt with brown brogues and sporran which looked great. Traditionally these are always black so it made him stand out from all the other men in kilts.

THE READINGS & MUSIC | Tamsin read ‘The Art of Good Marriage by Wilfred Arlan Peterson at the ceremony. Steve, a groomsman also gave a traditional Scottish toast for which we passed round a quaich – the two dads filled it with different whisky to symbolise the blending of two families. Sophie Peters, a local school girl sang and played acoustic guitar at the ceremony. Our first dance was to Strangers by The Kinks followed by Scottish Ceilidh dancing to the Jim Jam Ceilidh Band.

BEAUTIFUL BRIDESMAIDS | Kirsty, Tamsin and I have been friends since school. We all live in different places now and both bridesmaids have children so planning shopping trips etc was a challenge. I was so happy to have them both with me on the day and they looked beautiful in their different ‘berry’ coloured dresses.

THE FLOWERS | My florist was kind enough to give me flowers wholesale so that we could arrange ourselves into jam jar vases. The bridesmaids had gypsophlia bouquets and I had a qypsophila bouquet with daisies and pops of yellow. I also had a flower crown and the men had lovely buttonholes.

THE CAKE | Paul’s sister Victoria made us a naked Victoria sponge which she decorated with fresh berries and flowers. It was honestly the best cake I have ever had at a wedding and it looked so beautiful.

YOUR PHOTOGRAPHER | We chose Solen Photography, an Edinburgh based photographer to take our photos.

THE DETAILS & DÉCOR | Well we had lots! Almost everything was made by ourselves. For the ceremony we had a hand fasting for which I made our own cords. At the reception we had 50 metres of handmade bunting zig zagged across the ceiling with festoon lighting in between. We had a photo wall which had a few photos of Paul and I together from each year 2002-2015. We also had pictures of our parents and grandparents weddings and instead of a guest book we had a polaroid wall. There were luggage tags with guests names on and they had to replace their tag with a picture of themselves. My dad did a great job constructing a bar out of some old whisky barrels and he also made some 5ft light up letters with our initials. We gave succulents in mini plant pots as favours to the women and whisky miniatures for the men. We also had lots of blackboards for decoration which I wrote myself with welcome messages, dance floor rules etc.

THE HONEYMOON | We took our Golden Retriever puppy Olive with us on honeymoon to Poolewe in the North West Highlands. We were very lucky to have one of the best weather weeks of the summer and had a relaxing break, visiting different beaches with Olive every day.

MEMORABLE MOMENTS | The ceremony was the most special part for me. It was so relaxed and in such a beautiful setting. I also really enjoyed the speeches as it was the only part of the day I hadn’t been involved in.

ADVICE FOR OTHER COUPLES | If you are having a DIY wedding, leave plenty of time to set up, it always takes longer than you think. Also, if you are in Scotland and are thinking of having a Humanist ceremony make sure you book in plenty of time as they get booked very quickly!

On the day helpers | Be Eventful

Flowers  | Forget Me Not

Hair and make up | The Retreat