It’s really amazing thinking about it, that couples can now plan their wedding from the other side of the world. Isn’t the internet a wonderful tool? Of course Katharine and Monty also had a helping hand from their loved ones and also a couple of visits to the UK to plan their day.

WWW readers Katharine and Monty got married on 12th September 2015 on a gorgeous Autumnal day in Kent. They envisioned a quintessential ‘Katharine and Monty’ day, isn’t that so lovely? Being the time of the Faversham hop festival too, there were hops used in the décor alongside oodles of bunting and wild flowers. The village hall looked just marvellous and I adore the addition of the May pole for a spot of traditional entertainment.

This is one super beautiful day filled with smiles and love aplenty. Thanks goes to Livvy Hukins for sharing these glorious shots. 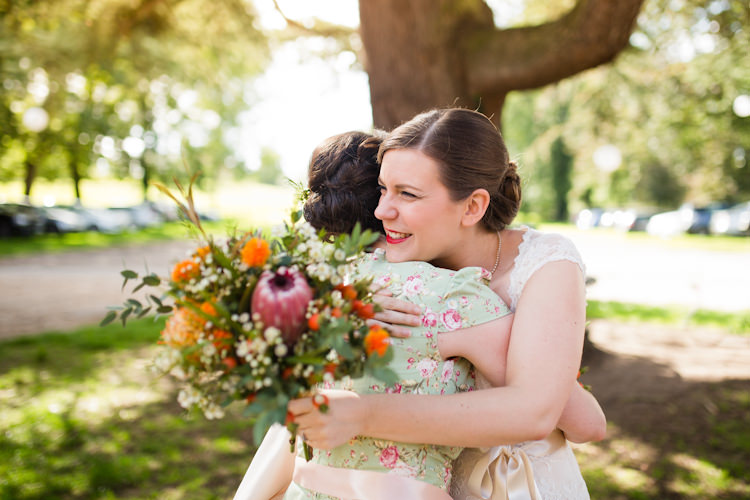 THE PROPOSAL | Monty and I live in Perth, Australia, where Monty is from. I grew up in the UK, but have lived abroad since 2008 bar a brief stint in the UK in 2011/2. We met in East Timor, while I was working for an international organisation and Monty was running the local English language school. Monty proposed at Big Brook Dam – a beautiful lake in the South West of Western Australia, about 4 hour drive from Perth. (And a lot prettier than it sounds) He proposed while my family was visiting from the UK so we spent the afternoon at a local winery!

THE VISION | We decided pretty early on that we wanted to get married in the UK, and ideally close to where I grew up in Faversham. My favourite time of year is Autumn, while September in Kent is really pretty, often with warm days. It’s also the time of the Faversham hop festival, so there are hops a plenty! We therefore wanted to create a very Kentish wedding, with a relaxed village fete feel. As we are lucky enough to have friends from all over the world, we wanted to give them real taste of everything local in Kent, from local beers and food to my primary school maypole! We also wanted to include some hints of Australia – my flowers were West Australian wild flowers.

THE PLANNING PROCESS | We were engaged for around 22 months so were fairly relaxed about planning. I go back to the UK at least once a year, so booked the venue 18 months before we were going to get married. I then did very little (apart from trying on lots of wedding dresses!) until Christmas 2014. We were in the UK for Christmas and managed to set up meetings with our caterer Nicci Gurr from Home Gurr’own, the registrar and the Lotty from Lotty’s Flowers and booked these in. The rest we did over Skype (I met our photographer in person, the lovely Livvy Hukins, 2 days before the wedding at our engagement shoot and Alex Hill, from Make Me Sparkle for a hair and make up trial 4 days before!) My mum also helped out with making over 60 metres of bunting and organising getting a maypole from my primary school to the hall! We were so lucky with everyone who worked on our wedding – everyone was so helpful and willing to leave many finishing touches to 2 weeks before the wedding when I arrived back in the UK. The last week was pretty busy, but with such fantastic people helping us, especially Nicci and the Home Gurr’own team, we were able to get everything we wanted and more!

THE VENUE | We got married at Chilham Village Hall, in Chilham. My Australian friends were surprised to find out that it’s a 15th century barn not a village hall! :) We had the ceremony in the large hall, then drinks and canapés outside while the hall was made up for dinner.

THE DRESS & ACCESSORIES | My dress was by an Australian designer, called Wendy Makin. I added the cap sleeves to one of her strapless dresses. My shoes I bought on Modcloth, while I was wearing my paternal grandmother’s pearls, and my late maternal grandmother’s eternity ring. My hair was an up-do by Alex Hill with West Australian wax flowers. I wanted to keep things simple, so I didn’t wear a veil.

FINDING THE DRESS | Finding the dress was perhaps the most difficult part of the process! I tried on dresses in the UK, the USA and Australia, and eventually found the dress I wanted in Perth, where we live. I had an idea of what I wanted (fitted, lace, not pure white!) but nothing felt right. I got closest in Washington DC with a dress by Anna Maier, but it was out of my price range. I then found Anna Maier dresses in the UK, but not the design I’d liked in DC. It was trying on a similar style dress in Perth which led to me finding Wendy Makin. Her dresses are simple design with lace, which suited me perfectly.

GROOM’S ATTIRE | Monty’s attire was a lot more simple! He knew he wanted a blue suit, and as a 6ft 5 rugby player the places he can buy his suits are limited! He bought a blue suit from Hugo Boss, with his shoes from Myer, an Australian Department store. His tie and his groomsmen ties were from Jeff Banks online. We kept it simple with his groomsmen – whatever blue suit they already owned and matching tie. The most difficult part was trying to find blue argyle socks!

THE READINGS & MUSIC | During the ceremony, we had our friends Meabh and Patrick, read ‘Black Marigolds’ by E. Powys Mathers. The reading reminds Monty of me and he choose it as our only reading. For a second reading, we made everyone sing! I love karaoke, and so it only seemed fair that we had some form of it at the wedding. Trying to pick a song that everyone would know the words, without any religious connotations was a little tricky, but we settled on ‘It must be love’ by Madness. I walked down the aisle to ‘Supernova’ by Underground Lovers, an Australian band that Monty loves. We walked out to ‘The boy with the Arab Strap’, by Belle and Sebastian – a song we both love, while our first dance was ‘Up with People’ by Lambchop. This was a song that we both loved independently and dance around our kitchen to at home! It’s also easy to dance to, without being too cheesy. Finally, our band was called Belle and the Whistles, a four piece who learnt our first dance, and played a great mix of soul and pop tunes. They also learnt Total Eclipse of the Heart for us, my top karaoke classic!

BEAUTIFUL BRIDESMAIDS | These were my two best friends in the UK from school and university, and my gorgeous god-daughter. The dresses I had made online from Polka Dot Polly as my bridesmaids lived in Manchester, Beirut and Faversham while we were planning the wedding. I loved the fabric, while the bridesmaids chose the style top they wanted and wore their own shoes. My mum bought the sash they were wearing from a local fabric store.

THE FLOWERS | I love West Australian wild flowers, and Lotty from Lotty’s flowers in Faversham was able to find flowers that are native to West Australia, including my favourite flowers, Geraldton wax. We had Geraldton wax as buttonholes and in the bridesmaids’ and my hair.

THE CAKE | We didn’t have a cake, but had raspberry pavlova towers with rosewater to share between each table. We did cut a selection of local cheeses (Monty loves a local cheese) which were then put on platters with pickles for the evening buffet.

YOUR PHOTOGRAPHER | Our photographer was the amazing Livvy Hukins. We first met on Skype in January 2015 and I loved her immediately! Her photos on her website were exactly what we were looking for – natural shots with an emphasis on incorporating the natural surroundings. We met two days before the wedding to have our engagement shots and to discuss what we wanted. She was great on the day and felt like one of our guests – she even busted a move or two on our dance floor. The photos were even better than I imagined they would be – beautiful light and managed to get a shot of each of our guests. Perfect!

THE DETAILS & DÉCOR | As we got married about a 20 minute drive from Faversham, we hired a red bus to transport all our guests to the venue. My mum is a seamstress extraordinaire, and so we asked her to make bunting for us. She did a fantastic job, making almost 60 metres of it! We also hired additional bunting from our caterer (just in case!) and also ordered hops in line with our Kentish theme. Our table decorations were kept simple, with ivory linen and beer bottles, which my family had collected over the year from Faversham Shepherd Neame brewery, to hold our table numbers. My family also collected jam jars which we filled with tea lights for the tables and to be put around the room. Our caterers were incredible and decorated the tables for us while we were outside drinking pimms, set up the amazing bar, decorated our table plan and drinks menu blackboards, and printed our menus. I’m incredibly lucky that my new sister in law and brother in law work in the theatre and so I asked them to help with the bunting. We bought a small embroidery hoop to tie the bunting onto, which finished above the top table. The ‘Katharine and Monty’ bunting my mum had made obviously had to go above our heads while we said our vows! Finally, we printed a simple order of service (the day before!) and made a Katharine and Monty ‘Cards Against Humanity’ game for our guests to play in between courses. Outside we had the maypole, lawn games, all finished off with paper lanterns and, of course, extra bunting!

THE HONEYMOON | Neither of us have ever visited Italy before, so we organised to fly into Rome and out of Naples. We spent a beautiful 12 days in Rome, the Amalfi Coast, Capri and Naples. It was fantastically relaxing, and filled with wine, amazing food and laughter!

MEMORABLE MOMENTS | There are so many memorable moments! My favourites would be walking down the aisle and seeing Monty for the first time, my Dad’s speech, second time lucky with the maypole dancing, the sunset photos, seeing all my favourite people in the same place at the same time to celebrate me and Monty, and of course the band singing Total Eclipse of the Heart…

ADVICE FOR OTHER COUPLES | Do what you want to do! Our day was quintessential Katharine and Monty and I don’t regret a single detail or decision we made. It made it all so much fun! Also delegate and involve everyone – part of the fun was seeing my mum’s amazing bunting take shape and the fantastic ideas of my sister in law and brother in law to decorate the hall. Finally, make sure you take a moment on the day together to enjoy it – it really does go by so quickly!

Caterer’s | Nicci and the team at Home Gurr-own. Fantastic caterers, specialising in all local produce, complete with wedding consulting service.

Band | Belle and the Whistles

Ohh I could gobble up one of those pavlovas right now hehe.

Katharine and Monty, thank you both so much for sharing your wonderful story with us today xo Lou