It goes without saying that many of us have treasured pets and just love all creatures great and small. However WWW readers Mathew and Hannah took their love of animals even further than the norm with their awesome animal lovers wedding of course! They had visiting alpacas at their day as well as dog Smudge the ring bearer! So amazing. It doesn’t stop there though as they also had a lovely nod to their love of pooches with a dog breed table plan, beautifully illustrated and teamed with dog breed table names too. Whoa!

Aside from the amazing animals at their day they had a really wonderful boho meets eclectic wedding style, complete with colourful touches such as tassel bunting in the tipi and multicolour blooms. Hosting their day at Escheat Farm in the Bedfordshire countryside on the 6th July 2019, meant that they could hold their ceremony outdoors amongst the trees. It looked really idyllic.

I love all the outfits, the flower crowns, the live roaming band and the pretty pink ice cream van. I also loved hearing that WWW was helpful during their planning, it always makes my day ☺️.

I cannot thank Bloom Weddings enough for sharing with us these tremendous images. 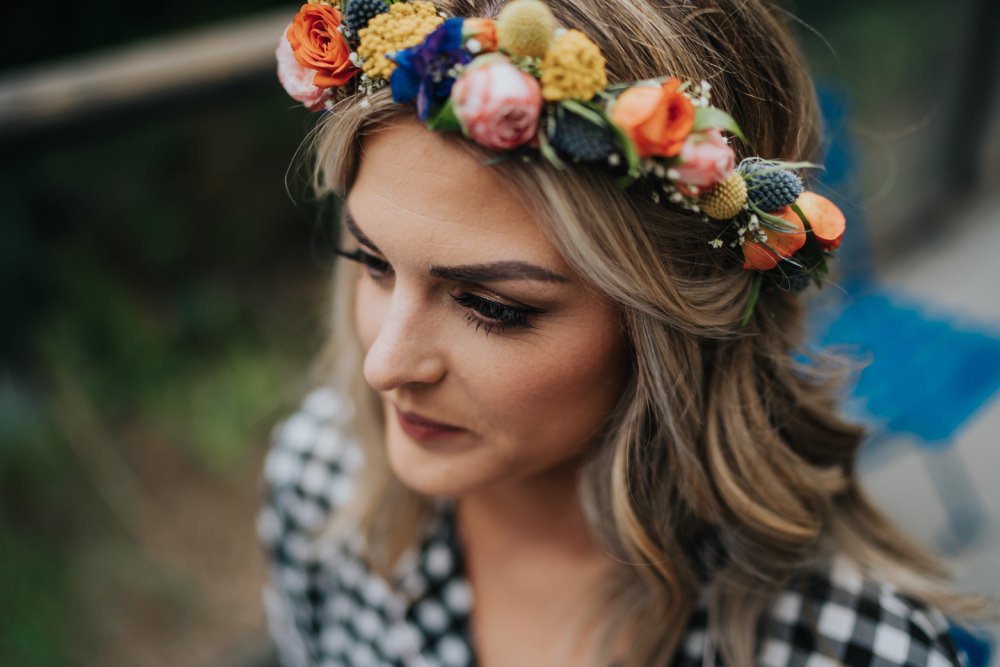 We went on a three week trip around Mexico, Belize and Guatemala in 2017. I’d bought a ring and planned to propose in Mexico so that we could spend the remainder of the trip celebrating. Our first night in a romantic town called Valladolid. The residents had poured into the square for a fundraiser for the local fire station. Couples young and old danced to and sang along to a brass band playing Latin music. It was possibly the most romantic thing I’ve ever seen, the atmosphere was perfect for a proposal.

Unfortunately the ring was back at the hotel so I proposed the following day at Chichen Itza, in a puddle, with an iguana watching on. After all, nothing says romance like a former site of mass human sacrifice.

We wanted to create a day that had our personalities written all over it. A relaxing, informal day with a boho-festival feel. Something outdoors in the sunshine around nature, with the people we love.

We planned everything ourselves, starting with the venue (grounds and tipi), then band and photographers. Once those pillars were in place we could relax a little knowing even if we had nothing else the wedding could take place and we’d have talented people to document it. Next was catering. We wanted a relaxed and informal meal, so our tapas starters were served as canapes and the wedding breakfast was paella which was served in big dishes on each table so people could dig in and help themselves.

Although Hannah and I both met and live in London, we both grew up in Bedford. There’s some beautiful countryside around Bedfordshire and we were lucky enough to find a stunning setting in Escheat Farm, which had an orchard and paddocked fields as well as beautiful gardens, with pond and ducks. It’s owner, also called Hannah, offered us a package in which she supervised the running of the day, and helped us with such vital questions as ‘how many forks do we need to hire?. 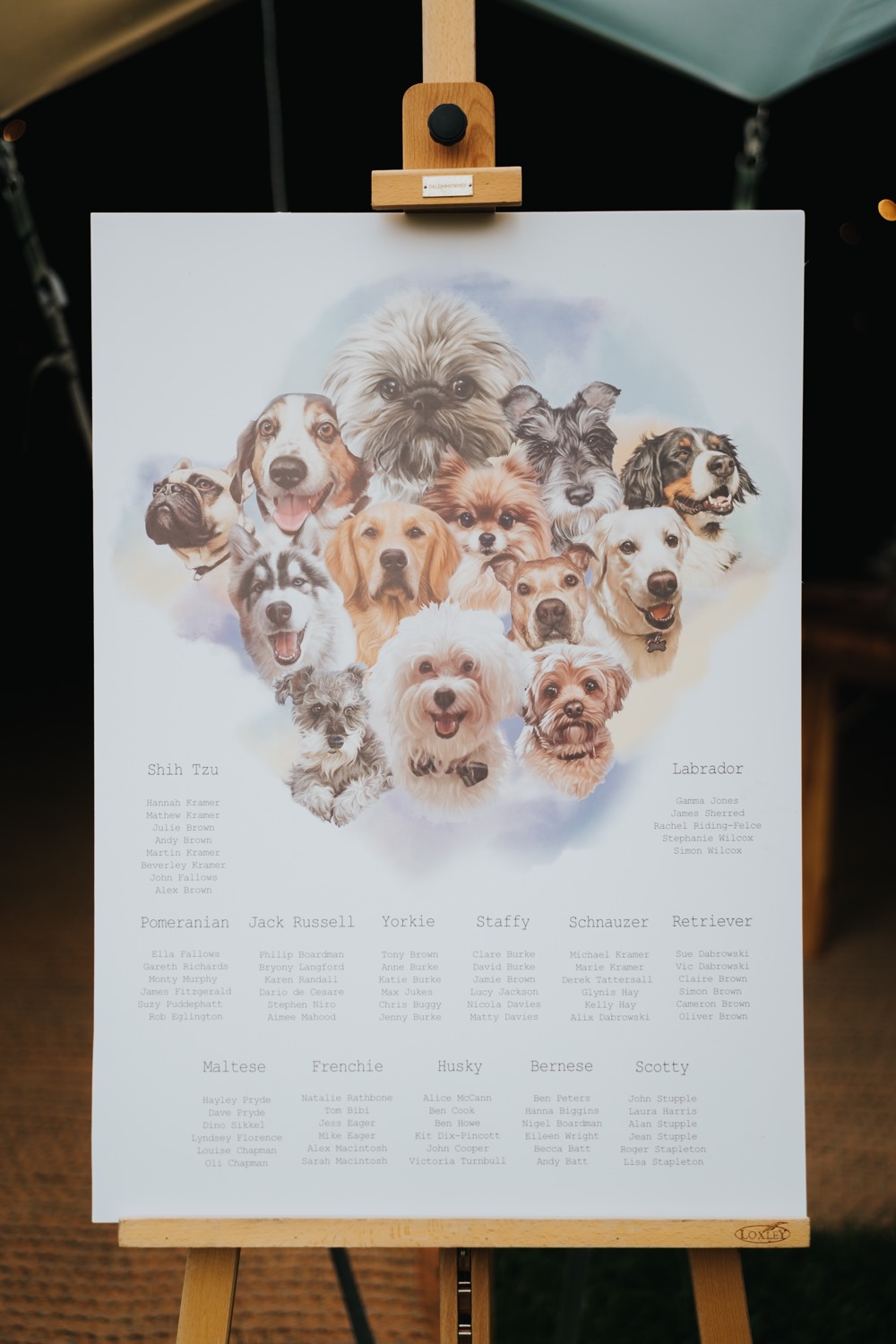 I opted for a tweed three piece suit, which was a toasty choice considering it was July. Thank god it was overcast on the day otherwise I might have fainted. We found a great place in Bedford called Vintage Suit Hire that allows you to buy, rent or have tailored tweed suits made which meant I could buy mine and rent the rest. They’re a great little business, I highly recommend them.

Hannah got her dress Bridal Rogue Gallery in Marleybone, it was a Pronovias gown.

The bridesmaid dresses were from ASOS.

We hired the groomsman two piece suits that matched mine. I personally revelled in the fact that they had to sweat as much as I did.

Hannah’s brother Alex is a bit of a musical maestro, so he played Hannah down the aisle to a ukulele rendition of Over The Rainbow by Israel Kawakami, which set the scene perfectly. Our ceremony was humanist, so we wrote our own vows which allowed us to inject our personality and humour into it. My sister and Hannah’s Nan performed readings.

To honor my German heritage we had a German oompah band called Hosen Brass march into the tipi and play after the speeches. They specialise in playing modern songs in the oompah style, which was an awesome way to fill the dancefloor immediately.

For us, this was the most stressful part. Having proposed in Central America, we liked the idea of colourful bunting, so we found this great Peruvian style bunting from HEMA. The question was, how much do we need? This became a burning question throughout this process. How much alcohol, how much bunting, how many flowers, will it look empty. Unfortunately you never really know the answer until you’re setting up the day before or morning of. We ended up buying colourful candles last minute to add some height to the tables as we had opted for a minimal amount of flowers on the tables.

We’re huge dog lovers, so we named each table after a different breed and featured an illustrative doggo montage on the table plan. I bought some cheap chalkboards from Hobbycraft along with chalk pens and created some signage for toilets, donuts etc. We also roped Hannah’s bridesmaid Ella into handwriting place names onto leaves in gold pen.

We borrowed an old leather suitcase for our cards and prosecco stand and inherited flip flops for sore feet that were left over from a friend’s wedding.

We didn’t have a strict colour scheme for the flowers, but we knew we wanted something naturalistic that complimented our theme, so we opted for green foliage punctuated by colourful wild flowers. The bridesmaids wore flower crowns of gypsophila, while Hannah wore a custom crown that matched the bouquet. Flowers were from Daisy Ellen.

As beautiful as flowers are, this was another area we chose not to go overboard on, although we would have loved to if we had the budget.

After trawling WWW and other wedding sites, we came to a shortlist of about five photographers that we liked. Bloom Weddings were right at the top and we were lucky to secure them nice and early. We loved their muted colour palette, relaxed naturalistic style and ability to capture heartwarming moments. They also had some stunning shots of animals on their site, which was important to us as we had a furry ring bearer and a couple of alpacas attending the wedding.

Anneka and Chris (Bloom Weddings) are a recently married couple themselves, so we got two photographers for the price of one. They are a lovely couple, we really enjoyed having them capture the day for us.

Most of the married couples we know ended up eating cake for weeks afterwards, so we opted for a tower of Krispy Kreme donuts which went down a storm. So well, that neither Hannah or I got a look in. We also hired a beautiful, Instagrammable ice cream van from Penelope’s Vintage Ice Cream which was a sweet addition.

We started where we left off after the proposal and continued through Central America (Costa Rica, Panama, Colombia) via Miami for 5 weeks.

Smudge being the bestest boy and bringing us the rings then sitting on Hannah’s dress during the signing of the register. The speeches. The screaming alpacas. The moment when the oompah band marched in for our first dance. Forming sweaty circles and frantically jumping up and down to Mumford and Sons. There’s too many to mention. It was a great day.

You’ll probably hear this a lot but enjoy it. It will be stressful and you’ll be pulled and stretched as everyone wants a piece of you. Just let whatever happens, happen and go with the flow.
Spend time writing your speech, memorise it and that will be one less worry on the day.
Get the bare bones booked early. Photographers, Venue, Band, Caterers. The rest is the fun stuff.

Hooray, what a wonderful day! Have you considered pets at weddings before? I think it’s such a wonderful way of really bringing personality and even more love to a wedding.