This afternoon is about all the colours you’ll be pleased to hear. There was no colour scheme, a beautiful emerald green dress and some super unusual yet divine Spring blooms.

WWW readers Hannah and Edward chose to tie the knot on the 8th April 2017 and envisioned a day that was completely them. They incorporated pretty paper lanterns, which hung from the reception venue ceiling, dinosaurs and childhood toys to name a few. Their party certainly packed a personality punch and it was thanks to their personal and unique touches. They focused on drinks and food to ensure guests were happy plus made all the decisions together during the planning.

Their venue choices were inspired. The Pittville Pump Room and The Painswick Centre in Gloucestershire were both perfect backdrops plus they kept to a budget of £7,500. Hannah’s Dig for Victory dress was just perfect for twirling and worked so well next to Edward’s sharp attire. That moment they walked down the aisle together looks just unforgettable, it was captured so perfectly by Leah Lombardi too, who I cannot thank enough for sharing these images today. 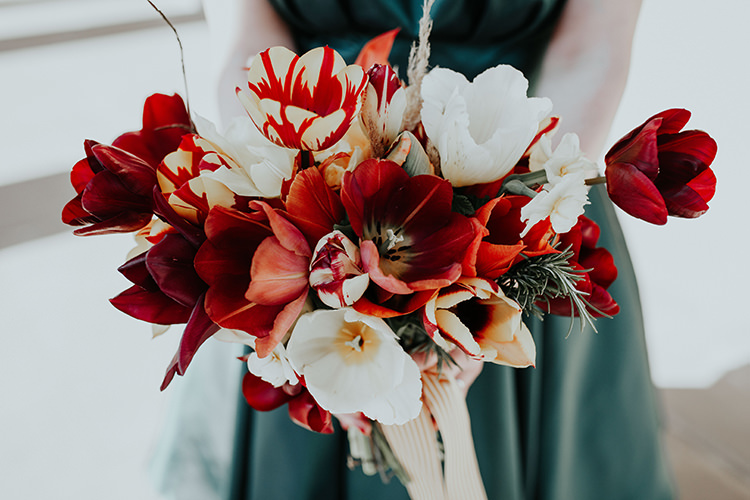 THE PROPOSAL | There wasn’t one really! We made the decision that we’d get married ‘one day’ at a festival in the summer of 2013, but that we had several things to accomplish first (like buying a house!). We kept the plan to ourselves whilst we ticked the other boxes and announced our engagement on our 10 year anniversary, almost a year to the day before the wedding took place.

THE VISION | We wanted a wedding that was entirely ‘us’. It started with a love of the bright colours and lanterns of the Feria de Abril in Seville, we threw in dinosaurs and fluffy Easter chicks, and it kind of snowballed from there!

There were several times during the planning process that we were asked if there was a particular colour scheme and our answer was ALL THE COLOURS!

THE PLANNING PROCESS | Fairly frantic! We got a few of the ‘big’ things in early and took the pressure off a little too much, which meant that the last few months became something of a whirlwind.

Key to the whole thing were delicious drinks and food, two of our biggest passions in life!

We made every decision together, which resulted in a day we were both completely happy with, but sometimes we felt it might have been simpler to share out a few of the decisions!

BUDGET | Overall, we spent roughly £7,500. It was more than we’d thought we would in the first place, but when I think over the day there’s nothing I would cut to bring that down and I really feel we got our money’s worth!

THE VENUE | We live in Yorkshire, but both our families are in Gloucestershire. The plan was always to find a separate venue for the legalities and then somewhere we could really make our own for the party afterwards! Pittville Pump Room in Cheltenham is a grand Victorian building set in a beautiful park, that just happens to be owned by the council, so is fairly reasonably priced. The Painswick Centre was a brilliant recommendation from a friend – it was such a flexible venue (with a skittle alley to boot) and the lovely centre manager let us get on with doing whatever we fancied in the space.

THE DRESS & ACCESSORIES | The dress came from Dig for Victory in Brighton. One of the only fixed points when we started out was that I wanted a green dress, and their emerald taffeta was perfect! They have a really brilliant system whereby you can mix and match different dress elements and have it custom sized. I sent them all my measurements and requirements by email, and received the dress and a coordinating cream silk bolero incredibly promptly. A couple of minor tweaks with a local dressmaker for things like the hem, and it was good to go!

The hair piece came from an Etsy seller and the shoes are Chelsea Crew via Revival Retro online.

FINDING THE DRESS | Given that I never wanted a ‘traditional’ dress, I didn’t think bridal shops were generally the place for me. My research was almost wholly conducted online, browsing blogs and dressmakers’ websites. DfV offered a made to measure solution in a 1950s style I love, that was budget-friendly and just what I was after.

GROOM’S ATTIRE | Ed’s suit and shirt came from Charles Tyrwhitt, his tie was from Hawes and Curtis and his shoes are good old Doc Martens.

THE READINGS & MUSIC | For the ceremony we had two readings; Strawberries by Edwin Morgan read by our friend Katie, and Tinwhistle Wedding by Ogden Nash read by our school friend Dave.

We walked in together to Hoppipolla by Sigur Ros, signed the register to the Yeah Yeah Yeahs – Hysteria, Bloc Party – So Here.

We Are (instrumental) and Aphex Twin – Xtal, and we walked out together to Elbow’s One Day Like This – though maybe we won’t be aiming for such a bonanza on an annual basis!

There wasn’t a first dance, but we had a number of eclectic playlists for the course of the reception, including all sorts, from Taylor Swift to Havana Cultura, Franz Ferdinand and Laura Mvula.

BEAUTIFUL BRIDESMAIDS | We didn’t have any, or any groomsmen. Our brothers were the ushers and did a brilliant job of ush-ing!

THE FLOWERS | Grace Alexander Flowers. She’s Ed’s cousin and was named by Design Sponge as one of the 20 Florists to Follow on Instagram 2017. She did a beautiful job and I can’t recommend her highly enough!

THE CAKE | The cake was made by a family friend who makes them as a hobby. We went for a rich fruitcake with full Christmas-cake style icing, which was delicious and we’re still scoffing through!

YOUR PHOTOGRAPHER | Leah Lombardi. The photos are INCREDIBLE, and I really don’t have enough praise for Leah, who brought her assistant on the day to help out. We were awkward as could be about the idea of having our photos taken, but from the beginning of our engagement shoot, Leah made us feel more comfortable and settled in front of the camera.

THE DETAILS & DÉCOR | As bright as possible! The lanterns and drapes were mostly sourced from eBay. The table cloths, cake stands and crockery were sourced by Ed’s mum and the table decorations were an assortment of our combined childhood toys, internet finds and fun things we enjoyed.

THE HONEYMOON | Three days after the wedding, we headed back to Andalucia, where we experienced the Semana Santa festivities in Seville, the beautiful beach in Cadiz, and sherry tasting and sunshine in Jerez. We’ve been to that part of Spain before, so it meant we didn’t feel the need to rush about to see all the sights, and could just immerse ourselves in the culture, the food and the gorgeous wines.

MEMORABLE MOMENTS | We’re a team, we do everything together, so we felt that this should include walking into the ceremony. Coming round the end of the colonnade at The Pump Rooms and seeing Ed holding my flowers, which he had been looking after for me whilst I spoke to the registrars, was a beautiful moment. We met and shared a few seconds of peace before the music began inside and we stepped through the doors hand in hand and the whirlwind began.

The piñata! My artist uncle built a papier mache dinosaur piñata, which was kept secret from both of us. Straight after we had cut the cake, our families pounced upon us with blindfolds and lead both of us into the centre of the room, and a stick was placed in my hands. We took several goes at it, but it finally gave way, it was full of paper flowers, sweets with our names and the date printed on them, and little chocolate hearts.

At the hotel before we went to join our guests at the party, we spent a few minutes in our room together, just soaking up the enormity of what had happened and beaming from ear to ear! We had a glass of fizz in a quiet room to reflect and toast one another before the short walk to the Painswick Centre where we dived back into the centre of the party.

ADVICE FOR OTHER COUPLES | Very little of what’s ‘traditional’ at a wedding is a requirement and there’s no set order that weddings have to go in. If you don’t fancy traditional bits or they aren’t representative of you as a couple, you can change or swap almost any element, or add in things that make it more ‘you’. Go with your gut on the things that you love and don’t be swayed by what you feel you ‘ought’ to do. It’s your day after all!

Cake | Made by a family friend

Ohh don’t you just love it ALL?

Hannah and Edward, thank you both so much for sharing your wedding story with us xo Lou