Where else to begin than with the cutest pet pug ever? Meet Pumba, present at the engagement and ring bearer extraordinaire for his owners WWW readers Maddie and Jack. And didn’t he look dapper in his sweet little suit? So adorable!

Our lovely couple today Maddie and Jack, were wed on the 21st July 2017 at Swallows Oast in East Sussex. They wanted to create a day that was relaxed and held outdoors, which is where their venue really came into it’s own. Their meaningful ceremony was held in the pavilion and the beautiful portraits by Kirsty Mackenzie were taken in the dappled woodland light.

Everything was kept rustic and natural, from the greenery and white bouquets down to the wooden details on the tables. They also added fun touches like gin bottles, a custom snap chat filter and live entertainment. It was all so thoughtful, fun and super stylish! What a gorgeous pair and a beautiful day. 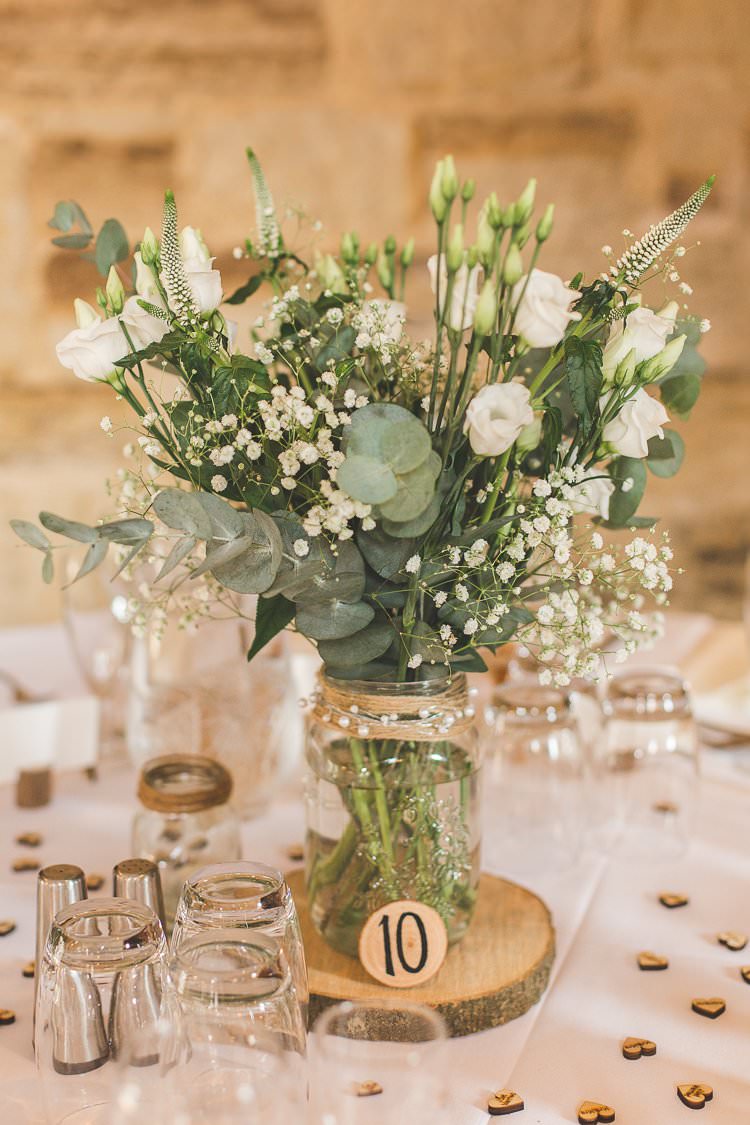 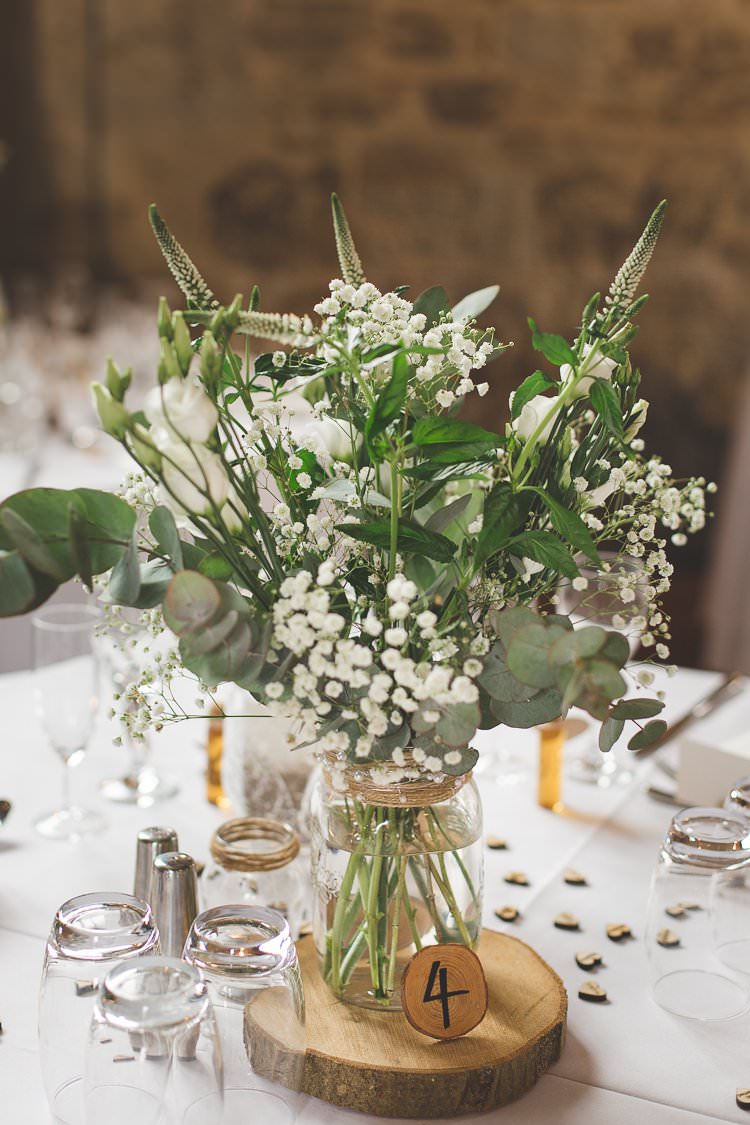 THE PROPOSAL | Jack booked a trip to Edinburgh for Maddie’s Christmas present in February 2016. One typically wet and windy day he decided we should go for a walk with our dog, Pumba, to Edinburgh Castle. After a long walk we arrived and discovered that they didn’t allow dogs in, which foiled Jack’s original proposal plan. Thinking quickly, Jack suggested that we go for a walk up to Arthur’s Seat. Halfway up we stopped to take in the view and Jack got down on one knee in the mud and proposed.

THE VISION | We both wanted a very relaxed day where our friends and family could kick back and enjoy themselves. We also love the outdoors so an outside ceremony was a must for us. And of course, the most important requirement was that we had our dog Pumba as our ring bearer.

THE PLANNING PROCESS | We had about 18 months to plan the big day, which meant we could take it nice and slowly and not get too stressed (that was the plan anyway, though the final few weeks were non-stop!) We took care of most of the big items first (the venue, the band, photographer etc.) then ticked the rest off the list later on. Suffice it to say, Maddie did the majority of the planning but Jack was on hand for the important things (i.e. the food).

THE VENUE | Swallows Oast, Ticehurst, East Sussex. The venue was absolutely incredible and we fell in love with it as soon as we saw it. We got married in their outdoor pavilion next to the beautiful Oast House, meaning we could have the outdoor ceremony we dreamed of. There is also a trail through the woodlands, which leads out onto a lake overlooking green rolling hills, these settings were perfect for some gorgeous wedding photos. The Oast House itself had a rustic feel, which was well suited to the relaxed day we were after. The venue owner, Mark, and the head of the venue’s catering company, Russell, were so helpful and accommodating so we really could have the day exactly as we wanted.

THE DRESS & ACCESSORIES | The dress was from the Wed2B store in Brighton. It was a simple strapless lace fitted dress with a long train. This was teamed with a vintage looking hair piece, necklace, earrings and bracelet for a bit of glitz. The theme of the accessories started from the necklace, which me and my mum found whilst looking through the jewellery of my Nanny who passed away a few months before the wedding, she would have been so happy that I was wearing it and she actually bought my wedding dress for me as well (my something old and something new!). To cover my something borrowed my Step-Dad (David) let me borrow his Grandma’s vintage watch to match.

FINDING THE DRESS | Me, my Mum (Lynda), Sister (Alex) and Mother-in-law (Jane) set out for a day of wedding dress shopping in Brighton. We had appointments in 4 shops and started off in Wed2B in the marina. After everyone was instructed on the criteria (no meringues or bling) I was handed a selection of dresses. I tried the first on and we were all quite shocked because we loved it. Not wanting to say yes to the first dress I tried on, we went through MANY more. Some were hilarious, some beautiful, and after 6 and a half hours of dresses we ended up back at the first shop buying the first dress I tried.

GROOM’S ATTIRE | Jack and his Dad (Peter) went to Selfridges with a targeted plan to get a modern and well-fitted navy suit. Having seen his cousin’s wedding suit from the same shop, he headed directly to Kooples where they had the perfect 3-piece with a pale pink tie and pocket square to match.

THE READINGS & MUSIC | We asked Maddie’s best friend Rachel and Jack’s Sister Lucy to read something during the ceremony. After searching for readings that weren’t too cheesy or we hadn’t heard too many times before we settled on “The Bridge Across Forever” by Richard Bach and “That Still and Settled Space” by Edward Monkton. For the ceremony music we hired a pianist; Phil Morton from MTA Events, to play One Day Like This by Elbow for the processional. He then played 3 songs whilst we signed the register, the first was a no brainer to decide, anyone who knows Jack will know that he has a somewhat strange affinity for Beauty and The Beast, he also played Feeling Good by Muse and It Must Be Love by Madness. For our recessional we chose Dreaming of You by The Coral as it’s one of both of our favourite songs.

BEAUTIFUL BRIDESMAIDS | The beautiful bridesmaids were made up of Alex, Maddie’s Sister and best friend, Rachel, who Maddie has been friends with since she was 1, Marie and Cat who Maddie has been friends with since school and Chelsey who Maddie met working in the University of Sussex Student’s Union bars and has been great friends with ever since. They were absolutely incredible and looked stunning. Not having a particular colour theme, we went for floral dresses which got an insane amount of compliments (probably because of the people wearing them!)

THE FLOWERS | Maddie’s Sister has an incredibly talented friend, Vanessa, who we were able to persuade to do our bouquets and buttonholes for the wedding, even though she’s not a professional florist (though she should be!). After a huge amount of Pinterest research we went for a green and white theme with a rustic feel and a variety of flowers including veronicas, garden roses, gypsophila and eucalyptus. For the table decorations, as we were going for a rustic theme my bridesmaid Rachel and I decided that we could do the table flowers ourselves. We got jars from eBay and wrapped these in twine and beads, Rachel and I took a floristry course and we were good to go. She definitely did most of the work on the day with my mother-in-law while I ran around like a headless chicken so I owe them one!

THE CAKE | When it comes to cake both of us love a chocolate brownie, so we thought why not have them for our wedding cake! Jack’s sister Lucy very kindly agreed to make them for us (as her brownies are divine) and stacked them into a tower to form a wedding cake. They were delicious and went down so well!

YOUR PHOTOGRAPHER | One of the first things we did was research our wedding photographer as this was a really important thing for us. We came across Kirsty’s website and loved her style. The pictures were unique and relaxed, with a lot of candid shots, which was exactly what we wanted. Jack’s cousin and his wife are wedding photographers (The Curries) so we sent the link to Kirsty’s website and a couple of others we had found to them for their opinion. They gave a big thumbs up to Kirsty, which was great because she was our favourite too. Kirsty was also very keen to photograph a wedding featuring a dog so it was meant to be. She was an absolute pleasure to work with during the ceremony, in the lead up and the process afterwards. She told us all we needed to know before and helped us to plan the timeline of the day (which was so helpful with her experience), she also tailored everything to us so we got exactly the photos we wanted. We could not recommend her more for a wedding photographer, her talent is clear from the photographs and she is such a lovely person.

THE DETAILS & DÉCOR | Being lovers of gin, we had Brighton gin and Edinburgh gin bottles filled with flowers as decorations (Brighton being where we live and Edinburgh where we got engaged). Instead of a traditional guest book we had a “guest book bench”, which people signed and it now looks great in our living room. For favours we had shots of Tuaca and we had a a Pimp Your Prosecco cart for drinks following the ceremony. We had a photo booth and 2 live bands at the reception, first was a Ceilidh band followed by a Funk band who also brought a DJ for their breaks. Having Pumba, our dog, with us for the day meant a huge deal to us as well as he is one of the family, he was involved from the beginning and featured on our “save the date” cards. We also had Maddie’s Step-Brother Adam perform the ceremony as he is a registrar, that gave a really personal touch to the ceremony.

THE HONEYMOON | We went to Indonesia for 2 weeks straight after the wedding, which was incredible. We started off in Ubud, Bali staying at the Alila hotel which was high up in the valley overlooking the jungle with a gorgeous infinity pool. During our time here we did a sunrise trek of the Agung volcano, visited the rice paddies, waterfalls and temples. After this we flew to Flores island to stay at the Plataran Komodo resort which we would highly recommend, there are only 12 beach front villas so the whole experience is very personal. Whilst we were here we took a boat to Komodo and Rinca islands to see the Komodo dragons in the national parks which was scary but amazing. After this we flew back to Bali to stay in the Melia in Nusa Dua. Here we had a swim up room and spent most of our time drinking cocktails and relaxing!

MEMORABLE MOMENTS | A memorable moment for Jack was Maddie walking down the aisle to a live performance of Elbow’s “One Day Like This”. We also had our pug, Pumba, as our ring bearer who looked very dapper in his bespoke suit harness. He walked down the aisle to Jason Derulo’s “Wiggle” to everyone’s amusement. Another memorable moment was the enthusiasm of people in the ceilidh despite not having a clue what to do. And Jack and Maddie topped off the night by crowd-surfing to Angels by Robbie Williams played by the live band.

ADVICE FOR OTHER COUPLES | Make sure you have plenty of planning time and people to share the load. When it comes to the big day make sure you relax, enjoy it and take in every moment, it goes so quickly! Also, make sure you instruct someone to save you some canapés which we definitely forgot to do (and we’ve heard since that they were delicious!).